When Barnet council announced it would be regenerating north London’s West Hendon estate, residents, though sceptical, had hoped their entire community would benefit. The regeneration scheme oversees the conversion of 680 homes – a mix of flats, maisonettes and council houses – into more than 2,000 high quality properties. Though the number of units will likely triple, residents claim only a fraction of the estate’s tenants will remain, come the project’s conclusion.

“Ninety-five per cent of the community will be evicted from where we live,” says Jasmin Parsons, a resident of the West Hendon estate for over three decades. “Some have lived here for up to 14 years now, some for over 20 years. They will be marched off the estate.”

In 2002 the council, partnering with private sector housing developers, embarked on the 25 year long programme, claiming in a report that the scheme will address the “fundamental problems” faced on the estate “including high levels of deprivation, poor layout and design, environmental degradation, lack of integration with local area and long term sustainability”.

But when the regeneration was touted to residents they expressed concerns – principally over its scale, security and cost. Eventually, off the back of numerous promises made in a pledge document, they agreed to the scheme. Among other commitments, the pledge stated that all current residents could stay, while leaseholders wanting to leave would be given market value for their homes.

Over a decade later the council’s promises have slowly filtered away. The social housing allocation has been reduced from 40 per cent to 25 per cent, secure tenants waiting for their new homes have been relocated to a half-built tower block, leaseholders have been offered paltry sums for their homes and all non-secure tenants face eviction, some pushed into the private sector, others relocated miles away from their friends and families. With significant rises to the annual service charge and parking permit, most of those wanting to stay simply can’t afford it.

Though all secure tenants were promised places on the regeneration, for many this means living on a building site for over a quarter of a century. As each block is flattened, residents have been relocated away from their homes in the open, green space next to the Brent Reservoir to a tower enclosed by three main roads and a mechanics.

“They’re trying to force them onto the traffic island which is surrounded by vehicles for another eight years,” says Parsons. “They have the noise form the streets, the paint fumes from garages below, all the exhaust fumes and the car fire. You’ve got the rats, the pigeons, virtually no sunlight and no view unless they want to look at cars going round.”

The original agreement stated that 540 of the new properties would be social homes, available to all council tenants on the estate. Having already endured a thirteen year wait, most face at least another five years before their home will be completed. Rather than tolerate these conditions, many have accepted defeat and moved on. Only 217 of the original 500 remain. Only 200 units are now allocated as social homes.

“What was originally stated was that this regeneration was for the benefit of the community. Basically there won’t be a community left here to take any sort of benefit whatsoever,” argues Parsons.

The situation has left the estate’s leaseholders in limbo. For those trying to leave, the impending redevelopment has warded off any potential buyers and, coupled with the lack of maintenance, property prices have plummeted. For leaseholders wanting to stay, the council has offered them a place under a shared equity scheme, entitling them to just 50 per cent, despite many owning their homes outright.

Last year Barnet Council began the process of meeting with leaseholders whose homes would be demolished during the next phase. As is a statutory requirement, it agreed to pay for each leaseholder to appoint their own surveyor to value their properties.

“We all picked our surveyor; there are five in total because there are about 30 leaseholders in this next phase who have to move out. I live in a two-bed maisonette that they valued between £250,000 and £275,000,” recalls leaseholder Jackie Coleman. Not happy with such a high figure, the council, through its ubiquitous outsourcing partner Capita, sent in its own surveyors.

“They came back with an offer of £130,000. My surveyor was shocked that it could be so little, especially since an average two-bed property in the Hendon area is significantly higher than that,” says Coleman. “Why give us our surveyors then send in your own? They were doing the same measurements, everything the same. You’ve got five people who are coming up with similar figures and yet Capita give £130,000. There were no negotiations with leaseholders about purchasing their properties. That came in the day before the compulsory purchase order arrived.”

To qualify for the shared equity scheme leaseholders will be required to contribute £200,000. The council has now upped its final offer on flats to £175,000, plus a 10 per cent home loss and disturbance payment. It’s still short of both surveyor valuations and the sum needed to qualify for shared equity. Factor in the tripling annual service charges and for many of the residents, including pensioners, remaining on the estate just isn’t financially feasible.

“Most people want to stay in the local area where they have lived most of their lives and those who want to move away will need to be financially stable to buy a similar property elsewhere,” says Coleman. “People just want fair for fair. People need money if they are going to move and buy again. Most leaseholders are middle aged and pensioners. The developers are going to be building over 2,000 properties, surely they can pay out a decent price to people who own their homes and let them stay as homeowners.”

“I’d been there for about eight years. I had the idea that I would become a secure tenant, then when they started on the regeneration that’s when we found out that we were just going to be non-secure tenants,” says Alex Finnie. He spent two years homeless in Barnet before the council eventually housed him on the estate.

After being served a notice to quit, Finnie went through a lengthy assessment conducted by the council to determine how urgent his need for housing was and whether it would be feasible to move him into the private sector. Though it took a court case to convince them the council eventually agreed to rehouse him, but miles away from West Hendon estate, his home for 11 years.

“I would have preferred to stay because it’s a community they’re dividing, it’s not just the housing factor, there’s a great community spirit in the estate which has been eroded and broken down piece by piece,” he says. “There’s a load of friends and family that are not too far away and as I say all the support networks that are in place here. There’s people who’ve been here over a decade or more and they’re being moved with their children.”

Ghazaleh Farnam has been moved three times in four years by the council. Originally she was placed in a private studio flat in Haringey, but as a sufferer from both epilepsy and type one diabetes, Farnam assured them she needed to be near a friend who could take care of her in case of a seizure or hypoglycaemia. After numerous assessments, the council arrived to the same conclusion. She was moved to a regeneration estate in Edgware for two years, and then placed on the West Hendon Estate as a non-secure tenant in 2013.

Now, Farnam is simply waiting for her turn to be “decanted” – the term used for evicting tenants. “When I saw 70 people around me going to court I was thinking, ok, when’s my turn? Next week? Next month?” she says. “We were told that where I live was going to be knocked down within 3 years. Then all of a sudden they announce it’s going to happen within 6-7 months. It’s not a well-planned scheme that we’re talking about. They’re very good at playing with words, trying to give you as a little information as possible.” 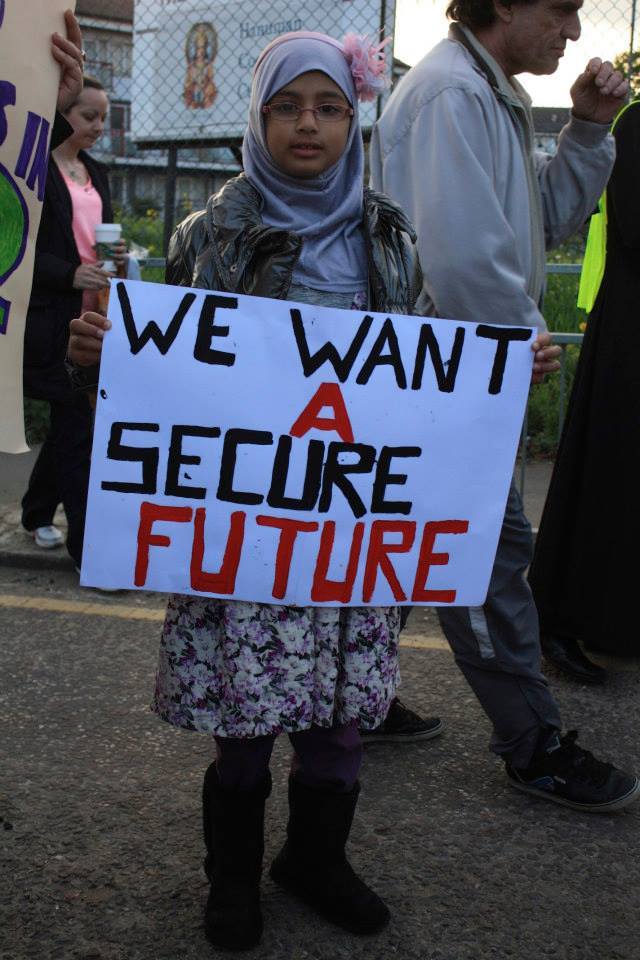 An eight-day public inquiry begins on Tuesday to ascertain whether proper procedure has been employed throughout the regeneration. The council will hope to clear its name using a publicly funded barrister, while the residents, who were refused their own request for similar legal help, have relied on the work of activists like Jasmin Parsons, described by neighbours as “an angel” for challenging the council and helping residents to secure new tenancies.

Some hope the inquiry will prompt the release of the council’s viability study, a document used by the developers to reduce the quota of affordable housing on the regeneration. So far it has been kept away from residents on the grounds that it is sensitive information. Others hope it will delay the compulsory purchase orders until after the general election, when a change in leadership could provoke a more sympathetic stance.

The inquiry may be their last chance, but residents and activists remain defiant. They’ve already amassed over 70,000 signatures in their online petition and to coincide with proceedings they plan to march from Marsh Drive community centre to the town hall.

But should the inquiry reject the residents’ grievances only one outcome remains for Parsons: “I’ve lived on the estate for over 30 years. By the time they get to me it will be over 40 years. I shall have raised my children here and my grandchildren used to be here. That counts for nothing. I will be evicted because I will not be able to afford the places that they’re putting in.”

When contacted for comment a council spokesperson, said: “There is a CPO public inquiry into the West Hendon estate and it would be inappropriate for us to comment ahead of that.”