The Lib Dems are set to lose around half their seats next year. But which party will benefit from their collapse?

An initial glance suggests the Tories should benefit the most.

The Lib Dems won 27 seats in 2010 with majorities of less than 10 per cent. These range from Solihull, which they won by 0.3 per cent, to Brecon and Radnorshire, where their majority is 9.7 per cent.

The Tories came second in 19 of these 27 seats. Labour came second in just 8. Therefore, we might assume, a Lib Dem collapse will help the Tories. A majority of 10 per cent is overturned by a swing of 5 per cent. If there is a 5 per cent swing away from the Lib Dems, the Tories will win 19 seats and Labour 8.

Ashcroft has polled 15 of the 19 seats where the Tories trail the Lib Dems by less than 10 per cent.

The average swing across the 15 seats is 4.6 per cent. If that applied equally in every seat, the Tories would be ahead in all of them, but they show all sorts of swings. 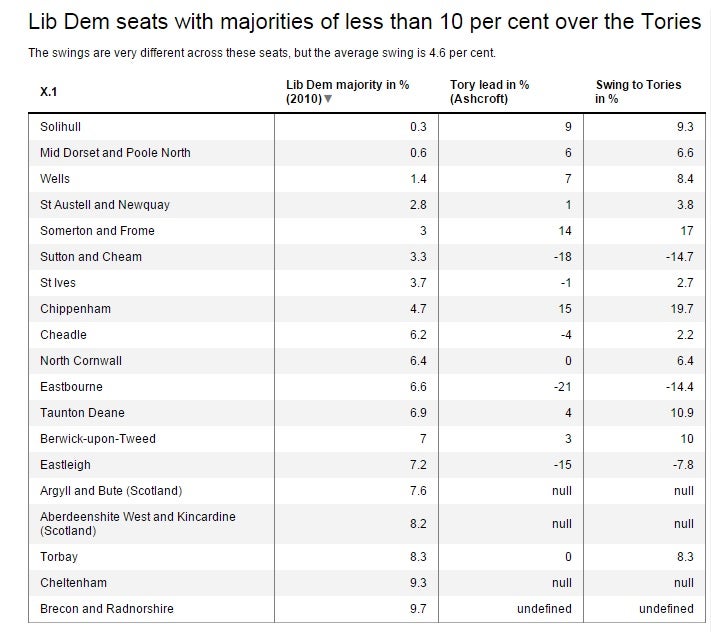 The crucial point is that the Tories only lead by more than 5 per cent in six of these seats (they lead by between 1 and 4 per cent in another three).

This contrasts with Labour, who lead by at least 12 points in 7 of the 9 Labour-Lib Dem marginals Ashcroft has polled, and by 1 point in an eighth seat (Cambridge). They are competitive in a ninth (Bermondsey) and are also likely to win two others (Burnely and Birminham Yardley) that Ashcroft skipped out in order to measure the extent of the Lib Dem-to-Labour swing.

This is because the Lib Dem-to-Labour swing is far greater. Labour are challenging the Lib Dems in seats where they hold majorities much greater than 10 per cent.

In September Ashcroft polled three seats – Redcar, Hornsey & Word Green and Cardiff Central – where the Lib Dem majority is 12 per cent. Labour led by at least 12 points in all of these seats.

Labour are even competitive in Cambridge, whey they came third in 2010, and Bermondsey & Old Southwark, which they lost by 19 per cent. 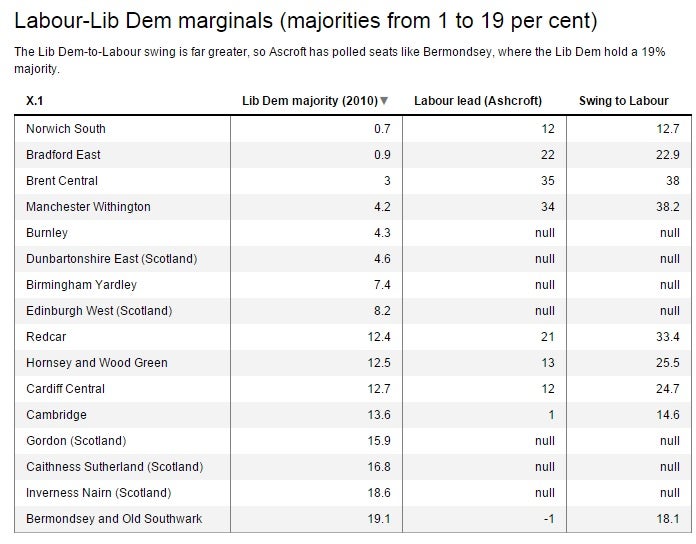 The Lib Dem-to-Labour swing in the 9 seats Ashcroft has polled is 25.3 per cent. This compares to a 4.6 per cent Lib Dem-to-Tory swing.

If the Lib Dem-to-Labour swing is so great, why are Labour not set to win more Lib Dem seats than the Tories?

The problem for Labour is that they can only win so many Lib Dem seats. Crudely, you can think of the Lib Dem MPs as holding two types of seats: a Labour-leaning seat or a Tory-leaning seat (excepting places like Orkney & Shetlands, which voted Lib Dem by 57 per centin 2010). There are only so many Labour, or left-leaning, seats.

Labour, despite seven years of mediocre leadership, will only be threatened by the remnants of a Lib Dem party or the Greens in their more middle-class seats.

Finally, these polls do not yet exclude the Lib Dems’ Scottish seats. Some pundits expect the Lib Dem collapse to be less severe north of the border, but the few Scottish national polls we have suggest it will be just as great – and the Lib Dems will also have to stave off the SNP.

Ashcroft’s polls of Scottish seats are due next month. After their release we will have over 100 seat-by-seat polls, although many have not been visited since the early summer. We will keep track of all of them here on May2015.com.