This article was originally published on May2015.com, our new elections site. 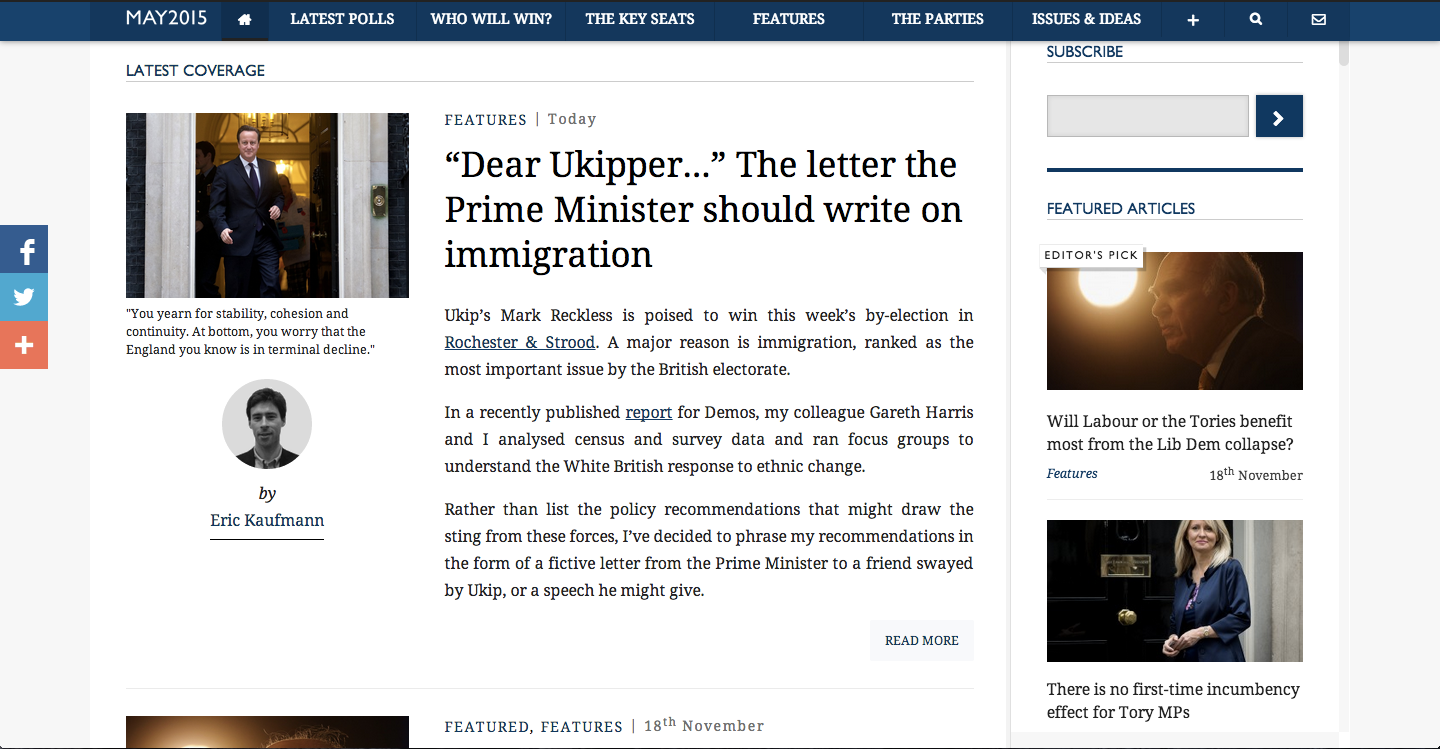 Ukip’s Mark Reckless is poised to win this week’s by-election in Rochester & Strood. A major reason is immigration, ranked as the most important issue by the British electorate.

In a recently published report for Demos, my colleague Gareth Harris and I analysed census and survey data and ran focus groups to understand the White British response to ethnic change.

Rather than list the policy recommendations that might draw the sting from these forces, I’ve decided to phrase my recommendations in the form of a fictive letter from the Prime Minister to a friend swayed by Ukip, or a speech he might give.

Everything wrong with this minister’s tip for cutting costs

The ethnic majority in England needs to be reassured.

The key point is that the ethnic majority in England, as in other European countries, needs to be reassured it has a future in an age of migration. When addressing minorities, the current narrative of ever-increasing diversity under an umbrella of shared British values is appropriate.

But when speaking to the ethnic majority a different narrative is required. This is not dishonest or two-faced, but represents a legitimate form of the diplomatic technique of constructive ambiguity, which recognises minority and majority Britons often connect to the nation in different ways.

I understand that immigration is your number one concern. I know from the extensive body of research on support for the far right and opposition to immigration that your concern with migration is primarily cultural, not economic. You feel the country is changing too fast. Your area remains overwhelmingly white English, but when you go downtown, or visit Birmingham or London, it feels like a foreign country.

Besides, you read in the paper that immigrants from Europe and beyond are entering the country illegally. You yearn for stability, cohesion and continuity. At bottom, you worry that the England you know – a land settled by people who have lived here for centuries, united by history, memory, traditions and ancestry – is in terminal decline.

Immigration is difficult to greatly reduce because, as part of the European Union, we must permit the free movement of people from other EU countries. As a signatory to human rights conventions, we have to allow a reasonable degree of family reunification – we wouldn’t want to prevent British citizens bringing their spouses and children here to keep their family together. Tourists and students bring much needed export income to Britain, though we are working hard to ensure that people don’t overstay their visas.

I’m not going to tell you immigrants put in more than they take out because I know economics is not your main concern.

Finally, skills shortages in certain sectors such as nursing mean it’s important for us to admit immigrants to fill these jobs – at least until we can train up enough British people to fill them. So it will be difficult to reduce immigration much further – certainly as long as we are a member of the EU.

We could leave Europe, but this would make it much more difficult for English people to settle in Spain, France or other countries and may carry adverse economic consequences because overseas investors count on us as an English-speaking gateway to the continent. Pollsters tell us most British people still wish to remain in the EU. So while we must control our borders and restore faith in the immigration system, significant inflows will continue into the foreseeable future.

Hearing this probably reinforces your belief that the ethnic English majority of this country is doomed because England is becoming increasingly diverse through both immigration and a younger minority population. You notice this most of all in hospital maternity wards and schools, where ethnic minorities or European immigrants form a disproportionate share of the young people using these services. I’m not going to tell you immigrants put in more than they take out because I know economics is not your main concern. What I want to focus on is culture and identity in a time of change.

Above all, I want to challenge your pessimistic view about the English majority.

Our government, and previous administrations, have exacerbated majority fear by dispersing refugees and council tenants to close-knit, homogeneous areas instead of to places with a history of population turnover and diversity. We haven’t considered how housebuilding and social housing decisions can accelerate local ethnic shifts. We will be more attentive to these dynamics in the future, seeking to build garden cities or dispersed development so as not to transform existing communities.

But above all, I want to challenge your pessimistic view about the English majority. A big mistake the media and government have made is to talk up ethnic change, emphasising how we are getting ever more diverse and how Britishness must change to adapt to this reality. Yet people forget that in many ways England is getting less diverse. This is a message the majority needs to hear more often because we know from American immigration history that it is only when the majority is confident in its ability to assimilate newcomers that the temperature of the immigration debate falls and social cohesion improves.