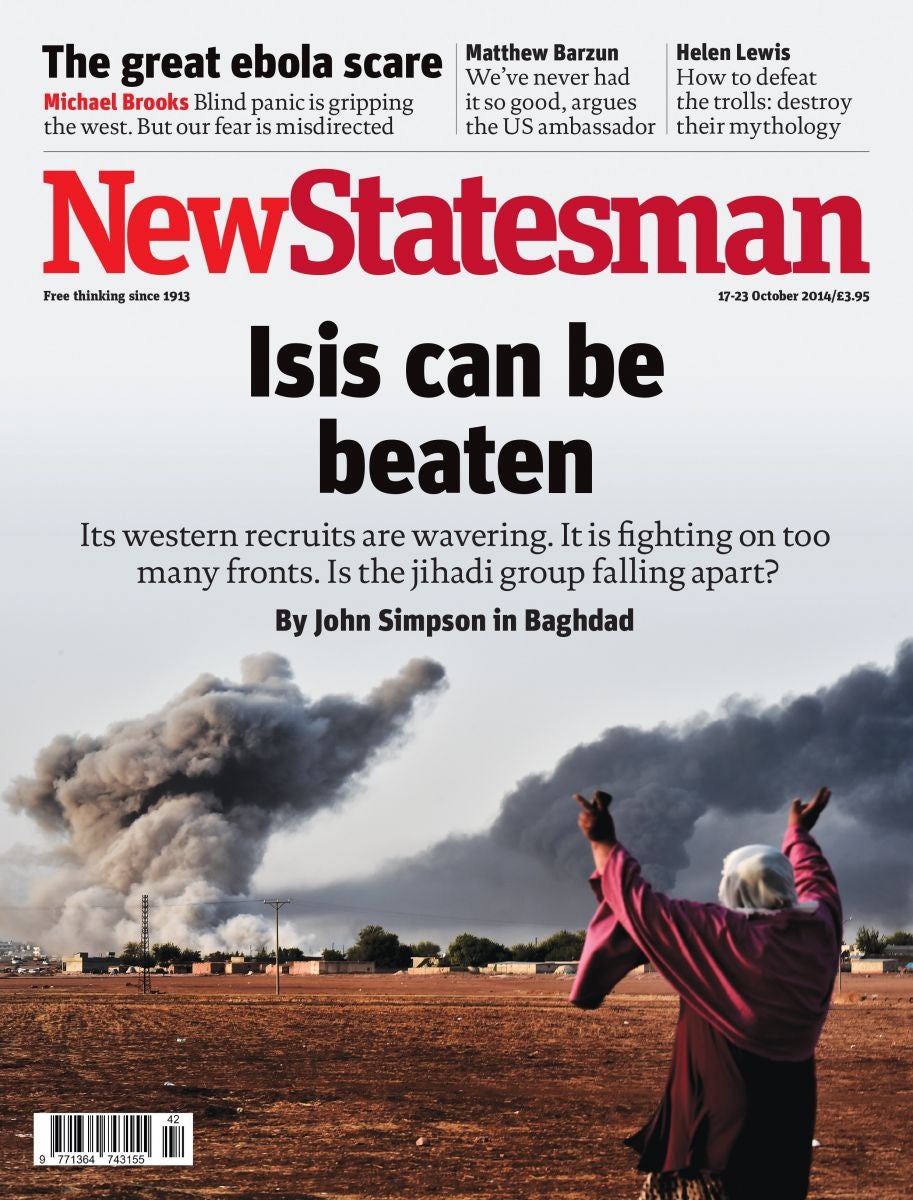 A guest column by US ambassador Matthew Barzun

John Simpson in Baghdad: Islamic State can be beaten

The Great Ebola Scare: why we must stem the panic in Europe

George Eaton: Labour might not be at war with itself, but Ed Miliband desperately needs to inspire his supporters

Howard Jacobson: What makes us human?

Felix Martin on the coming age of mediocrity in

While acknowledging the current horrors of ebola and Islamic State, the US ambassador to the UK, Matthew Barzun, wonders why we are so determined to dwell on the negative in our global narrative. It may be the worst of times in some senses, he argues, but it is the best of times in many other ways; child mortality, extreme poverty, damage to the ozone layer and the HIV infection rate have all been reduced in recent years:

So why are we intent on fixing our lens on the chaotic? And why do we insist on trying to weave a grand narrative out of mostly unrelated things? Do we believe there’s a common unravelling force at work behind the ebola tragedy, Russia’s incursion into Ukraine and the independence campaign in Scotland? My guess is that it might have more to do with how we feel than how things are.

Barzun argues that although at such moments we may feel drawn to strong leaders with a “grand master plan”, nimbleness and flexibility are the qualities needed to deal with global threats:

What is the best way to lead and govern in times of remarkable change?

Here’s what Teddy Roosevelt said at the dawn of the progressive era: “Do what you can, with what you have, where you are.” And one of America’s great unsung heroes, John “Gil” Winant, ambassador to Britain during the Second World War, explained in 1946 his approach to leadership in chaotic times as, “Doing the day’s work day by day, doing a little, adding a little, broadening our bases wanting not only for ourselves but for others also, a fairer chance for all people everywhere . . .”

It is impossible to plan for every eventuality. And it is hardly fair to accuse the US of not having a highly detailed blueprint but simultaneously warn us that we should be taking into account our allies’ opinions and concerns. We take our responsibilities seriously but cannot be responsible for everything that happens. Other international actors make choices for good and for ill. So even the most far-sighted diplomacy must sometimes be reactive.

Cover story: John Simpson on why Isis can be beaten

The BBC’s world affairs editor, John Simpson, files a despatch from Baghdad, where there are clear signs that Islamic State’s grip is weakening as western recruits begin to lose their resolve. Contrary to the defeatist tone of western politicians and media commentators, Simpson argues, Isis can be beaten:

“Seemingly unstoppable,” as someone on the BBC’s Today programme described the Islamist group the other day. “The Isil steamroller,” an American news anchor echoed. “There’s nothing to hold them back,” agreed an exhausted Kurd who had just escaped the street fighting in Kobane, on the border between Syria and Turkey, and was interviewed by the massed ranks of the world’s press.

How can you blame them, when our political leaders are queuing up to tell people how effective the Islamic State fighters are, and how useless are the efforts of those who are fighting them?

More than a week ago, Turkey’s president, Recep Tayyip Erdogan, was forecasting the imminent fall of Kobane and warning that air strikes had failed. The Eeyorish US secretary of state scored a particularly encouraging headline: “John Kerry suggests Iran could lead fight against Isil if ‘US fails miserably’ ”. That’s the stuff to give the troops. And here is our own Foreign Secretary, in his best Henry-V-before-Harfleur manner: “We can’t save Kobane from falling to Islamic State, says Philip Hammond”.

Simpson believes the emphasis on Kobane is unhelpful and has skewed the picture. Islamic State is indeed in control of that small town on the border between Syria and Turkey, but it is a “different story” in Baghdad, where, he points out, the Iraqi national army successfully repelled IS fighters only three weeks ago:

Kobane provides the world with the impression that IS is advancing everywhere, successfully dealing out the savagery that makes it so terrifying. The only boots on the ground belong to Kurdish fighters, who have not always been particularly effective.
The Turkish army could sort out IS in no time flat, but the Turks have a phobia about helping any form of Kurdish resistance, in case it spreads into Turkey itself.

Simpson senses that the IS rank and file are not as dedicated as they once were. The jihadis are fighting on several fronts in two countries and reports suggest that demoralised western recruits are increasingly repulsed by the atrocities they have witnessed:

A new IS training video shows recruits being beaten and bullied and forced to carry out exercises to the accompaniment of live rounds. This works with professional soldiers, but with volunteers, as most of IS’s fighters are, it can be counterproductive.

The hundreds of enthusiasts from western Europe and the US who have joined IS have often (Jihadi John aside) proved rather feeble and lacking in the necessary bloodlust. They are usually restricted to the status of what US soldiers call REMFs (short for “rear-echelon motherf***ers”), doing the cooking and the laundry.

Michael Brooks, the New Statesman’s science correspondent, takes a dispassionate look at the facts of the ebola outbreak and the real threat posed by the virus in Europe. Western fears about mass contagion are largely unfounded, he argues, and the widespread anxiety must be stemmed in order to avoid a “short-sighted and short-lived” response:

Amid the rising panic, a few calm voices are struggling to be heard. Sarah Wollaston, who chairs the House of Commons health select committee, has said that she expects the UK to get five cases in total, at the rate of roughly one a month. The NHS, she says, is perfectly ready and able to cope. Seth Berkley, chief executive of the Global Alliance for Vaccines and Immunisation, concurs: ebola is not a disease you have to fear when living in a wealthy country. “The likelihood of this causing a major epidemic in Europe or the US is very, very low,” he says.

Brooks suggests that the “panicked reaction” to ebola is a symptom of the public mood and the current “economic and political gloom”.

In Liberia, however, the situation remains dire, as Clair MacDougall reports in a letter from the capital, Monrovia. To make matters worse, health workers on the front line are on the verge of striking:

With close to 500 infected people in treatment centres, and almost three times as many yet to access care, the strike threatened to derail efforts to contain the crisis in Monrovia, now the centre of the ebola outbreak in West Africa. Given the huge risks and sacrifices endured by local medical staff, it is not hard to understand their anger.

At least 200 health workers have been infected with ebola and 90 have died, according to the latest government figures. Yet pay is modest.

In this week’s Politics Column, George Eaton argues that even though the Labour Party is not engaged in outright civil war, it is mired in a despondency that is just as self-destructive:

This is not a party at war. There has been no repeat of what Labour’s policy review head, Jon Cruddas, described to me as “the gang warfare” that disfigured the Blair and Brown years. By historic standards, the party that produced the MacDonald split of 1931, the struggle between the Bevanites and the Gaitskellites and the SDP schism of 1981 remains united. At the first meeting of the Parliamentary Labour Party following the conference season and the near-death experience of the Heywood and Middleton by-election, there were just two dissenting voices: the Warrington North MP, Helen Jones, and the former welfare minister Frank Field. “It was hard to avoid the undercurrent of anxiety but the group dynamic inevitably led to the PLP rallying around,” a shadow cabinet minister observes. But while not locked in combat, Labour is desperately in need of inspiration.

Howard Jacobson: What makes us human?

The novelist Howard Jacobson is the latest contributor to our “What Makes Us Human?” series, published in partnership with BBC Radio 2’s Jeremy Vine show.

Jacobson, whose most recent novel, J, was shortlisted for yesterday’s Man Booker Prize, suggests that laughter is the route to “conscious humanity”:

The Navajo celebrate a baby’s first laugh as a rite of passage, a moment in which the baby laughs himself, as it were, out of inchoate babydom and into conscious humanity. It’s a wonderful concept and grants a primacy to laughter that we, who probably laugh too automatically and certainly far too much, would do well to think about. If it’s laughter that makes us human, or at least kick-starts the process of our becoming human, what does that say about what being human is?

I choose to believe that laughter is the portal to creativity, not necessarily in the sense of making things but in the sense of connecting to a world outside the self, in the first instance noticing that there is a world that isn’t you.

Mariana Mazzucato, RM Phillips Professor in the Economics of Innovation at the Science Policy Research Unit (SPRU) of the University of Sussex, has been awarded the first New Statesman/Speri Prize for Political Economy for her work on smart growth and the entrepreneurial state.

Prof Mazzucato said: “Ignoring the key role of the state – or the taxpayer – in wealth creation has, in my view, been a leading cause of inequality, allowing some (hyped-up) actors to reap a rate of return way beyond their actual contribution.”

Our TV critic, Rachel Cooke: not even a priapic
Pepys can save ITV’s Great Fire

Peter Wilby: why TV debates are the best
way to decide the next election

Angels and whores: Michael Prodger on the
unsettling work of the artist Paula Rego