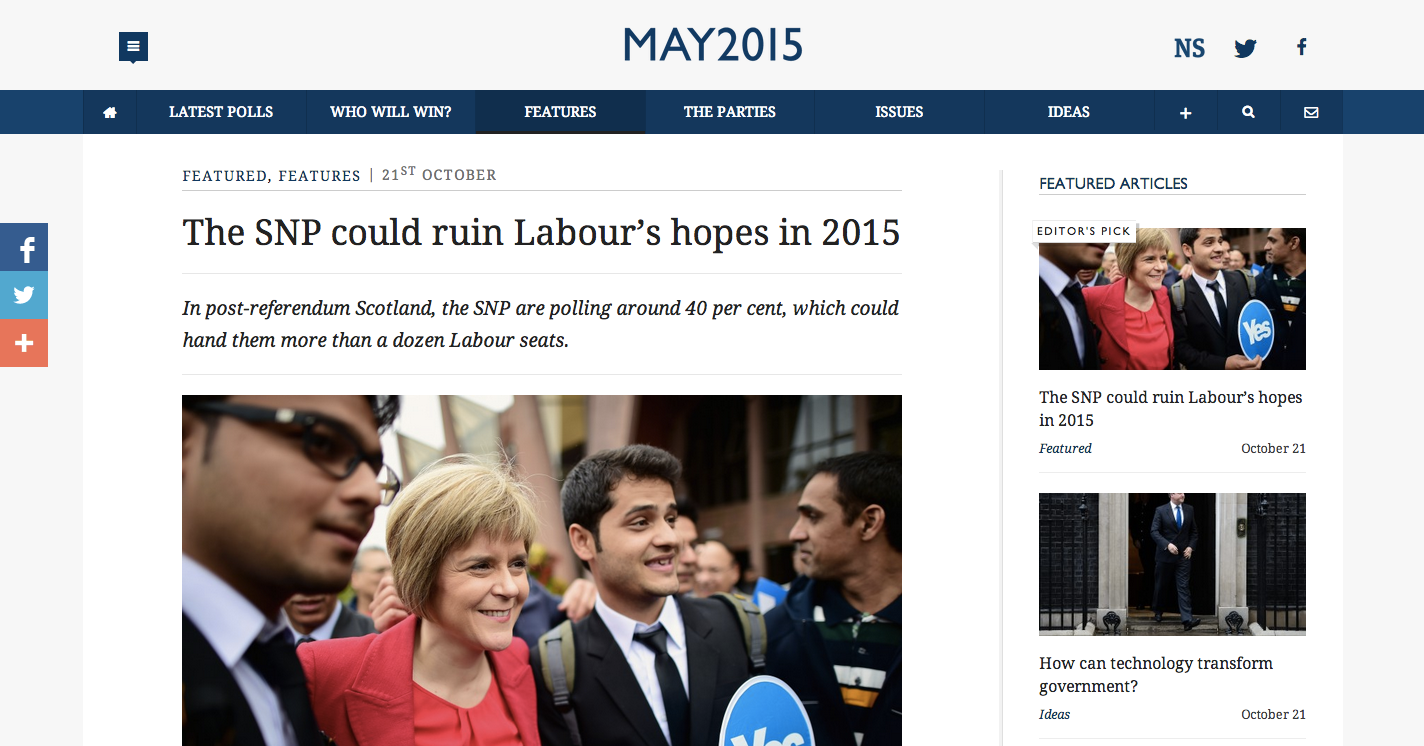 Today’s YouGov poll for the Sun, the first of their four Tue-Fri weekly polls, suggests that the SNP will win 49 per cent of the Scottish vote in May.

In 2010 the party won 19.9 per cent. In post-referendum Scotland, nationalism seems to reign.

That’s the headline, but it’s as initially misleading as the one the Daily Mail and Breitbart ran yesterday, when they suggested the Tories had now overtaken Labour north of the border.

The problem is that these are UK-wide polls offering regional breakdowns. They are asking around 1,000 people across the UK their opinions, which make their figures accurate to 3 per cent across the UK, but less accurate when we just look at the responses of people in, say, London or Scotland.

In today’s YouGov poll, or Friday’s, which the Mail and Breitbart invoked, the figures are based on between 150 and 200 Scots. This gives them a margin of error of above 7 per cent, but the “Tories are now ahead of Labour” headline is based on them polling just 1 per cent more than Labour (20 to 19).

A year ago YouGov’s polls put the SNP on 23 per cent and Labour on 41. Those numbers have now reversed.

Similarly, today’s figure of 49 per cent for the SNP could mean the actual figure is in the low 40s.

We can start to work out exactly what the number is by considering these Scottish sub-polls, or “sub-breaks”, over time. If we take the past week’s worth of YouGov’s polling, we can combine six polls: their four polls for the Sun last week, their weekend poll for the Sunday Times, and today’s poll for the Sun.

In each of these polls their figures for Scotland are based on between 150-200 respondents. But together they add up 1,027, which brings us to the accuracy of a typical UK-wide poll.

There is one, major caveat: these figures are sampled and weighted by UK-wide demographics, rather than Scotland’s. We would need a Scotland-only poll to give us more accurate numbers, but these amalgamated numbers are unlikely to be far off the ones that such a poll would give.

By averaging the results of these six polls we can get an idea. This is how each party has fared across the six individual polls in the past week:

The average figures for the parties over the week are shown in brackets in the legend. They put the SNP on 42 per cent, Labour on 25, the Tories on 18, Lib Dems on 6, and Ukip and the Greens on 5 and 3.

This compares to a Panelbase poll earlier this month which put the SNP on 34 per cent and Labour on 32 (with the Tories on 18, Lib Dems on 5, and others on 6 and 5 – close to our YouGov numbers).

The chart below shows how our averaged YouGov numbers and the Panelbase poll compare to the 2010 election, when Labour won 42 per cent, the SNP 20, Lib Dems 19 and Tories 17.

Our averaged numbers are less stark than the headlines. The SNP look to be far ahead of Labour and all others, but have far more often been around 40, rather than 50 per cent. And Labour, despite their relative collapse since 2010, are still half a dozen points or so ahead of the Tories.

But the consequences for Labour and the election could still be dramatic.

You can explore how these polls might translate into Scottish seats here.

We will shortly be integrating this into our full, UK-wide model, but our Scottish projection – which can use either uniform swing or Electoral Calculus’ Strong Transition model – suggests the SNP would win more than 40 of Scotland’s 59 seats if they win 42 per cent in 2015. They currently only have 6 MPs. (Click on the graphic to make your prediction.) 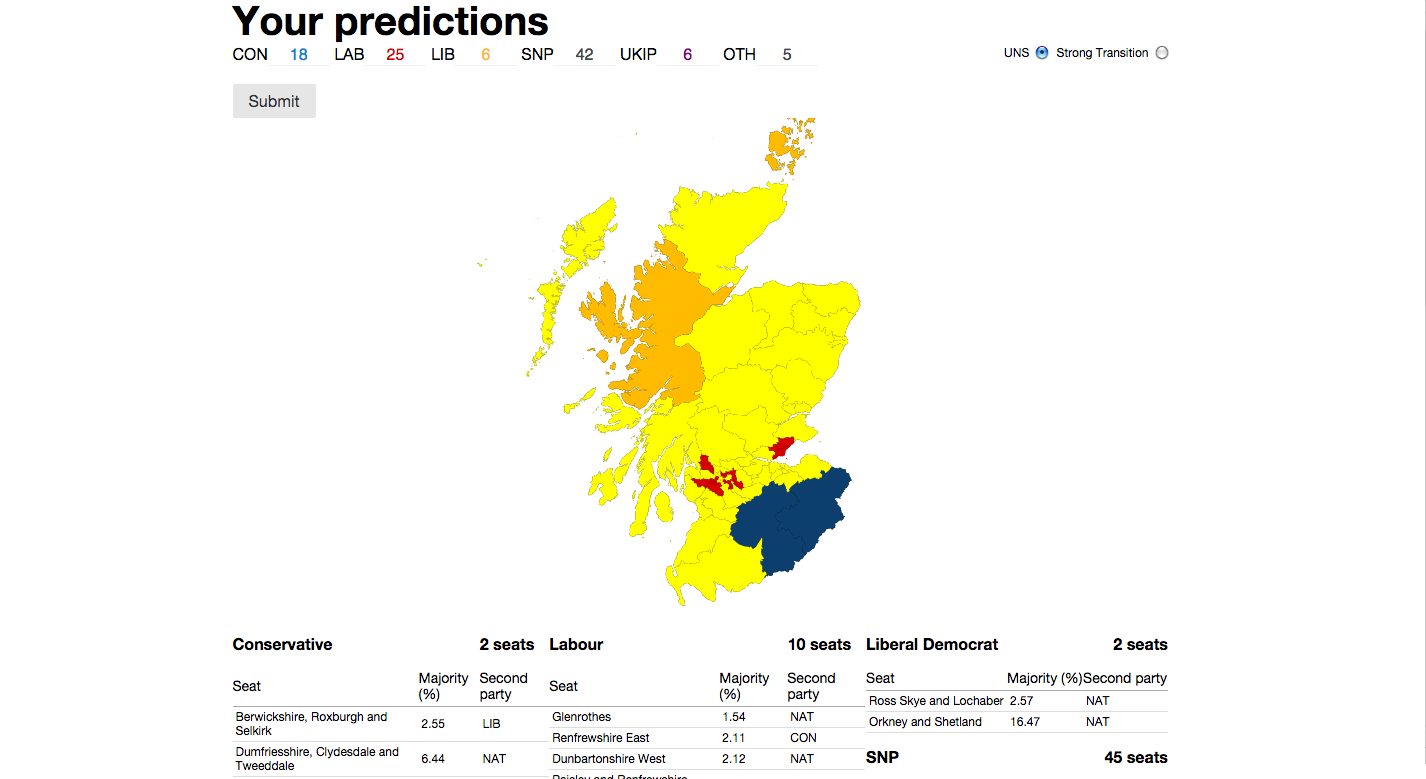 Labour have 40. They are set to collapse to between 10 and 12 on these numbers, going by uniform swing or our other default model, Electoral Calculus’ Strong Transition. (A more conservative estimate based on the Panelbase poll would hand the SNP around 20 extra seats – 10 from each party.)

Apart from the sampling, there are other challenges with this projection. The national poll number for the Lib Dems – of 6 per cent – will likely to be higher. We’ve shown how the party appears to have a strong incumbency effect in England, judging by Lord Ashcroft’s marginal polls, and these swings imagine party stalwarts like Danny Alexander, Jo Swinson and Charles Kennedy will lose their seats.

The Lib Dems made this election complicated, Ukip made it unpredictable, the SNP could reshape it.

Our figures also fail to account for demographic data, or results from the 2011 Scottish Parliament elections and referendum, which would give us a better indication of how different seats might play out.

But if the SNP do manage to win as many as 30 Scottish seats, and take 25 or so from Labour, it could prove decisive in May. Ed Miliband’s party could then fail to win 300 seats, as the Tories might, and three parties – the Lib Dems, Ukip and the SNP – could all be key to forming any coalition.

These numbers, of 30 or 40 SNP seats, are far beyond the bookies’ current odds: they are predicting the SNP will win 11–12 seats. And some poll-watchers have pointed to how few seats the SNP threatened to win in 2010.

But this is post-referendum Scotland, after an election in which 45 per cent of the country voted to leave the UK. They weren’t all SNP voters, but the party is clearly now more popular. If we compare this week’s numbers to last year’s, from 15-22 October 2013, YouGov’s six polls put the SNP on 23 per cent and Labour on 41 per cent. Those numbers have now reversed.

And Ukip have shown through by-elections in first South Shields and now Heywood & Middleton how an anti-establishment party can win huge support in seats where they have almost no 2010 base.

The collapse of the Lib Dems made this election complicated. The revolt of Ukip made it unpredictable. Now the post-referendum rise of the SNP could completely reshape it.

UPDATE: This looks at how a group of academics have tried to create more sophisticated models for Scotland, and suggests that aggregating YouGov’s “cross-tab SNP numbers look[s] to be spot on…the weighting bias wasn’t that big at all”.