In his introduction to The Coalition Book, his newly published collection of cartoons, Martin Rowson quotes the great David Low: “Politicians are merely waxworks; it’s the cartoonists who bring them to life.” He adds: “What this means in practice is that I’ve been able to create an entire cast of wholly lovable characters out of the actual human dross on offer.”

Whether you agree with that harsh judgement on our democratically elected leaders or not, it’s true that Rowson and his fellow cartoonists help shape and define politicians’ public image – from John Major in his grey underpants to David Cameron as a lace-loving Cavalier. It’s enough to make you feel sorry for them. 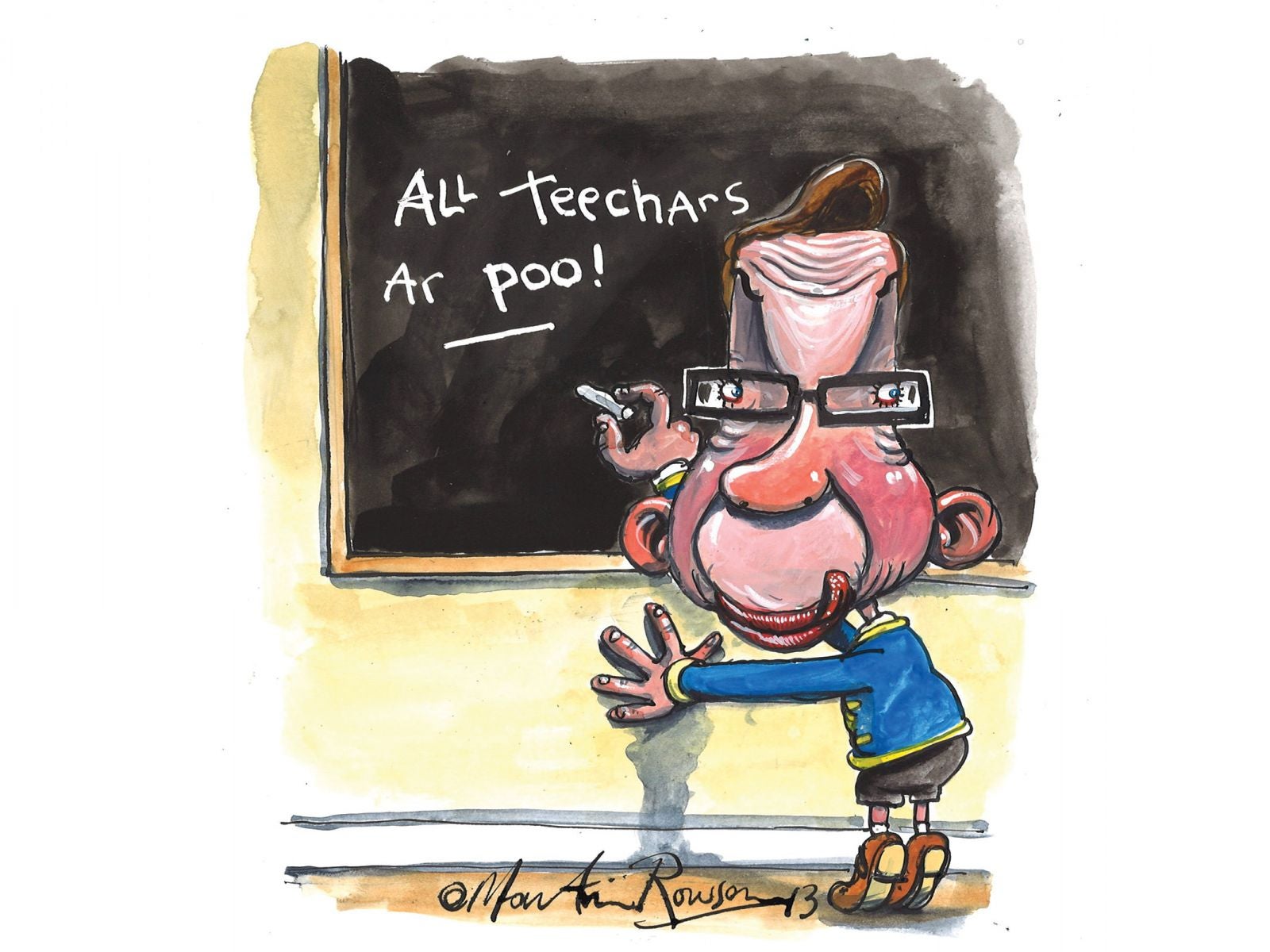 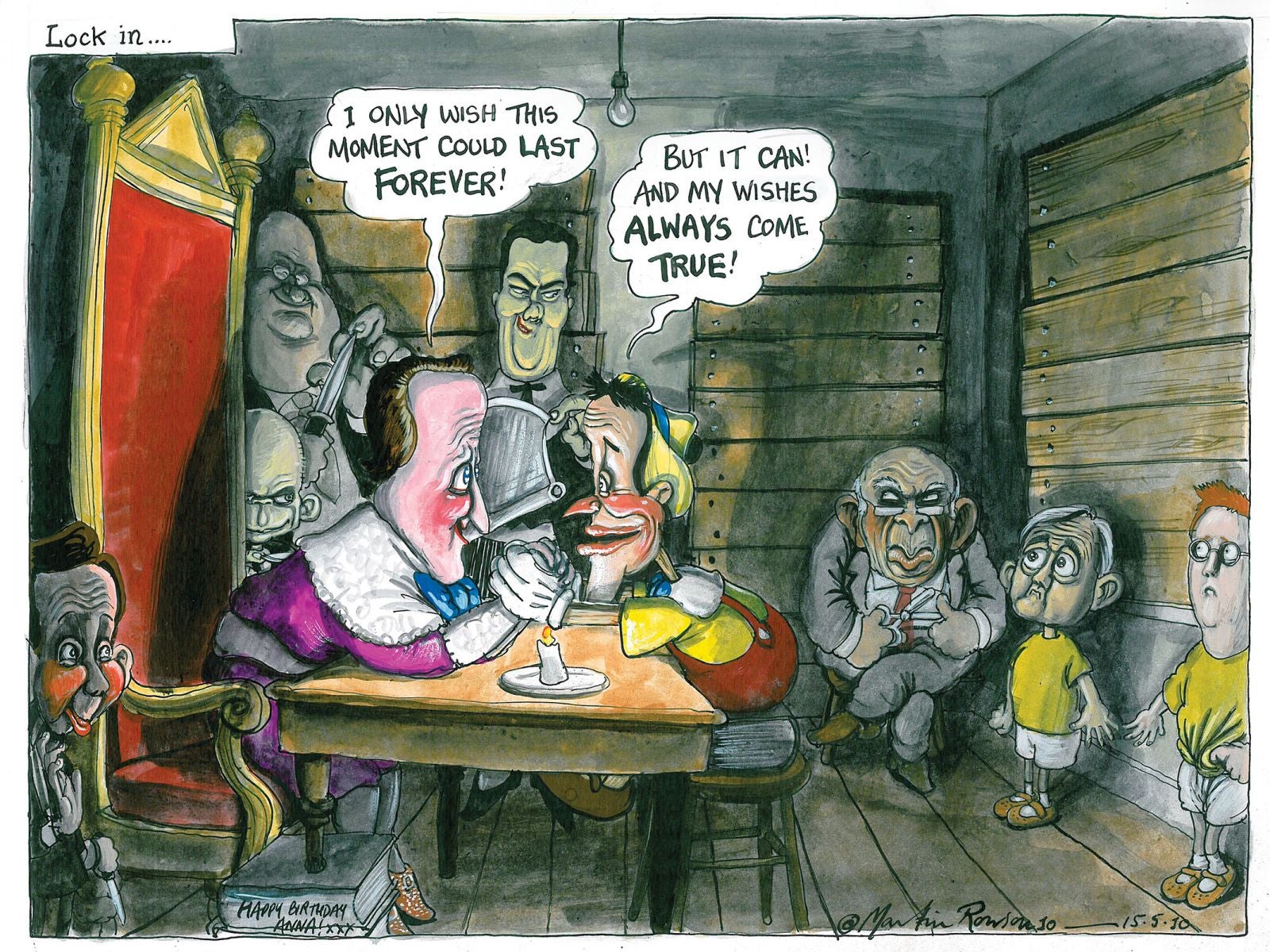 Condemnation, May 2010
“Having plighted their troth in the Rose Garden, Cameron and Clegg agree to fixed-term five-year parliaments. Note the early iterations of Michael Gove and Danny Alexander. I was still feeling my way.” 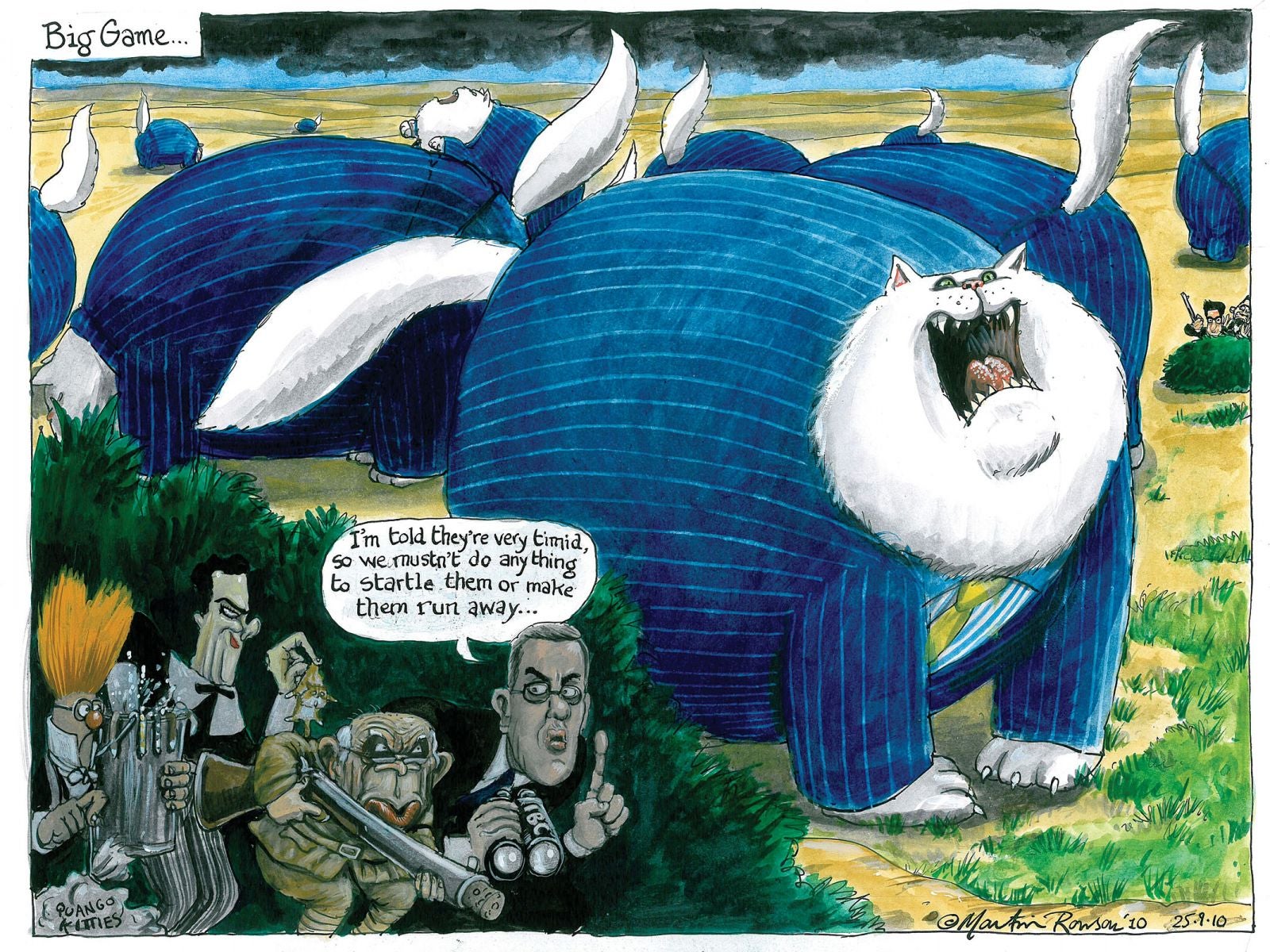 Cat scam, September 2010
“Sir John Vickers’s independent commission on banking started exploring exactly what went wrong during the crash. The Labour leadership rivals Ed and David Miliband, seen in the distance, have different approaches, though the general attitude is that the rich, if spooked, will flee like startled fawns.” 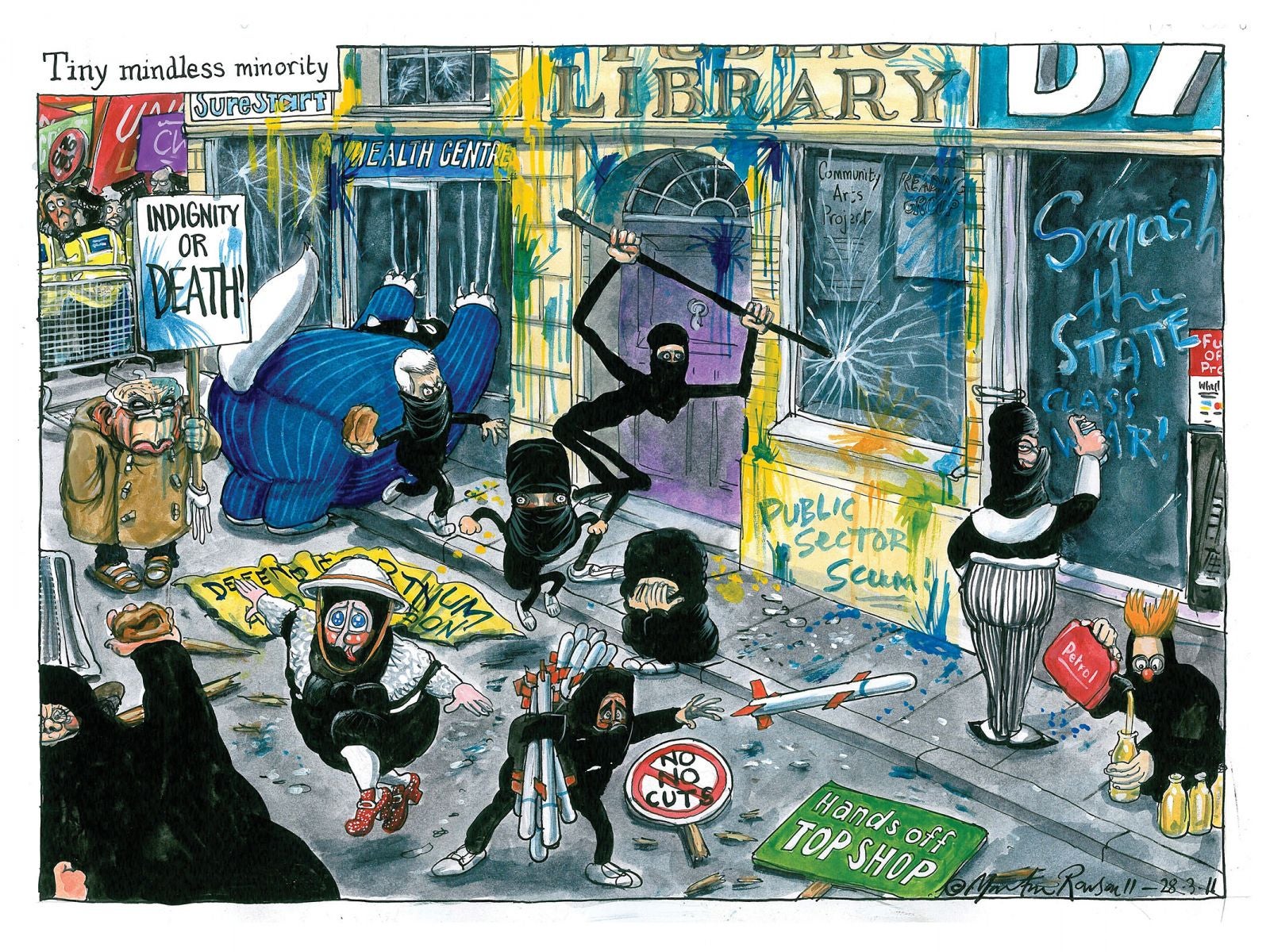 Classy war, March 2011
“Towards the end of a massive TUC-sponsored march against spending cuts and austerity, a few committed anarchists smash a few shop windows, as they usually do. Civilisation as we know it ends that very second.” 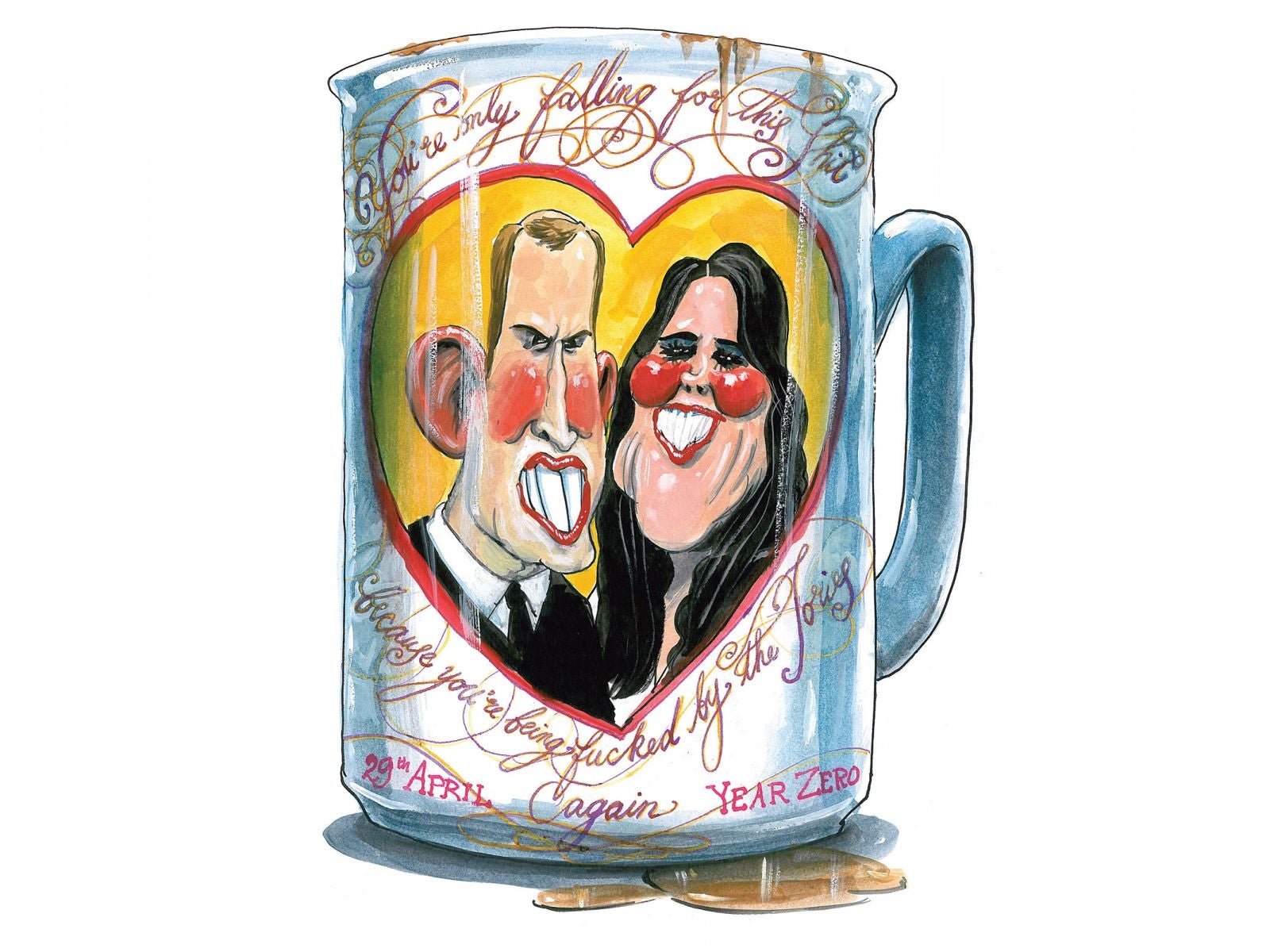 What a rich diversion, April 2011
“Her Majesty the Queen allowed us to celebrate the marriage of her grandson Prince William to Kate Middleton, yet another opportunity for heavily armed men to march with robotic tread through civilian areas guarding one of the most dysfunctional families in history. Well, good luck to them. Royal weddings and riots – that’s how you know the Tories are in power.” 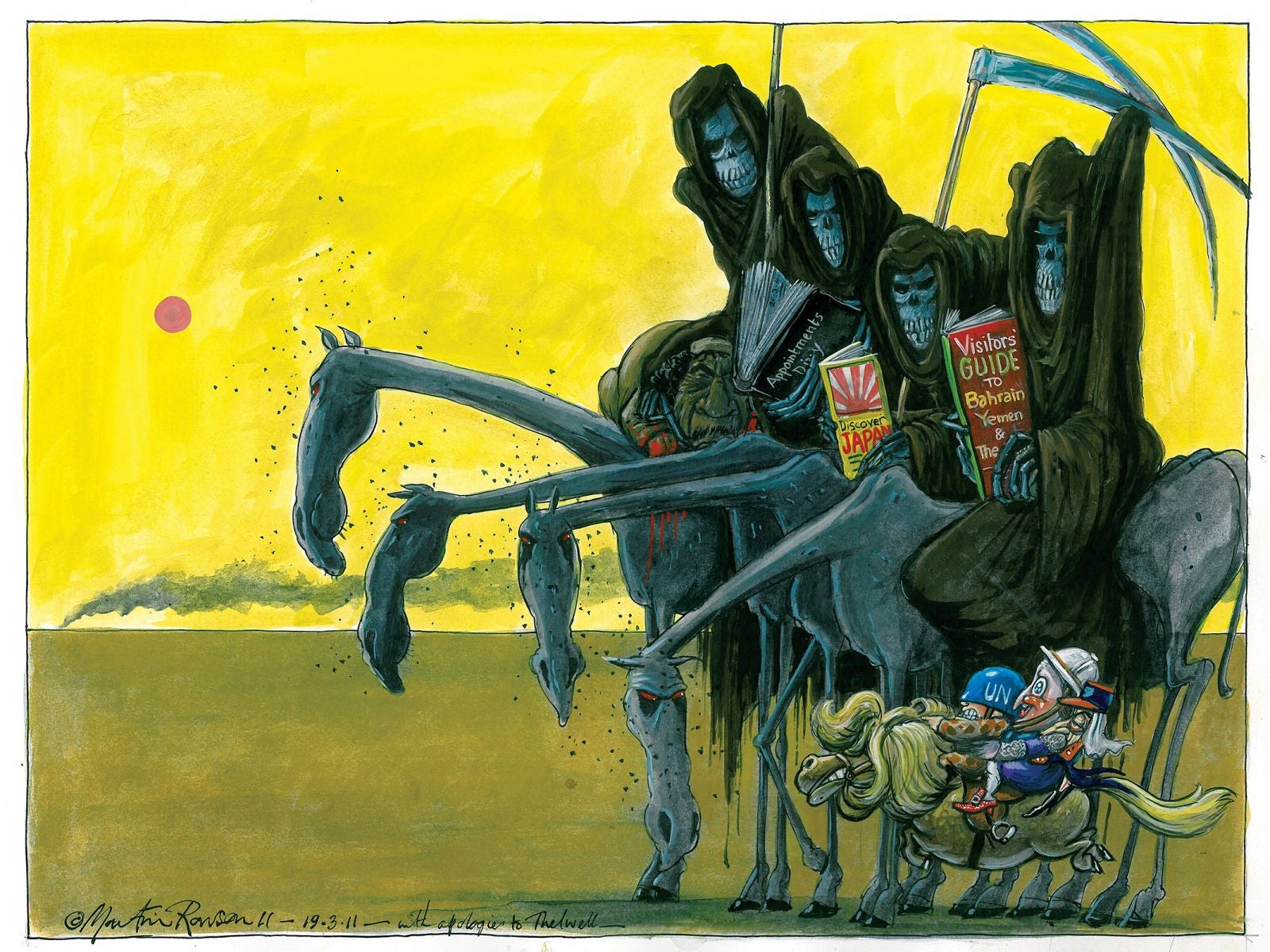 Cute crusader rescue, March 2011
“The Four Horsemen of the Apocalypse are joined by the UN, Britain and France in the Libyan conflict.” 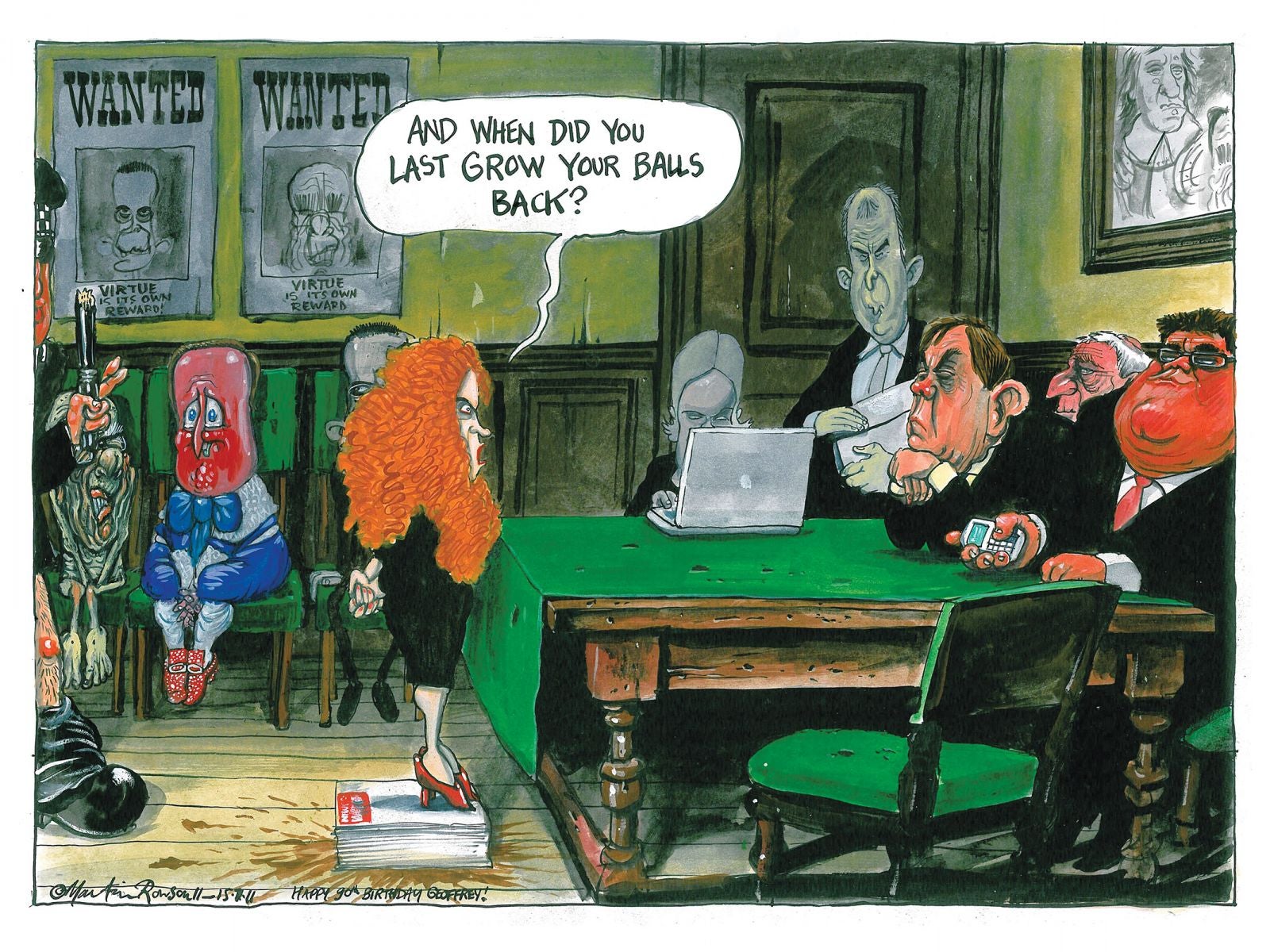 Tough chic, tough cheek, July 2011
“Rebekah Brooks appears before the Commons culture, media and sport committee and her nemesis Tom Watson, on whom she’d turned her hacks after he called for Tony Blair to resign in 2006. As a Sun correspondent told him: ‘She’ll never forgive you for what you did to her Tony.’ ” 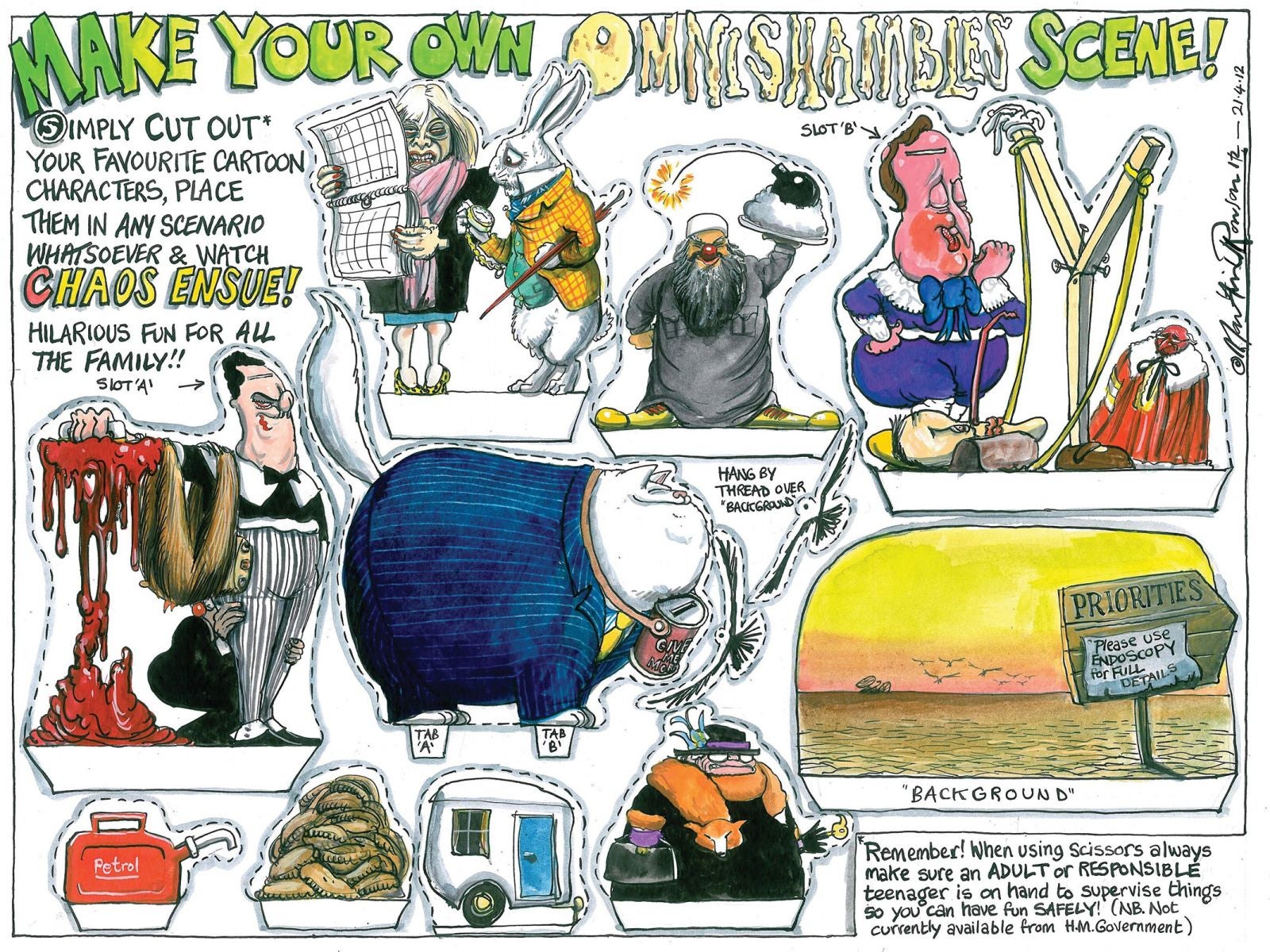 Cock-up theory, April 2012
“Theresa May got the dates and timing wrong in trying – yet again – to deport Abu Qatada; House of Lords reform was foundering; Osborne’s Budget was turning into a joke; the economy was tanking; the government’s head was stuck up its arse. Have fun!” 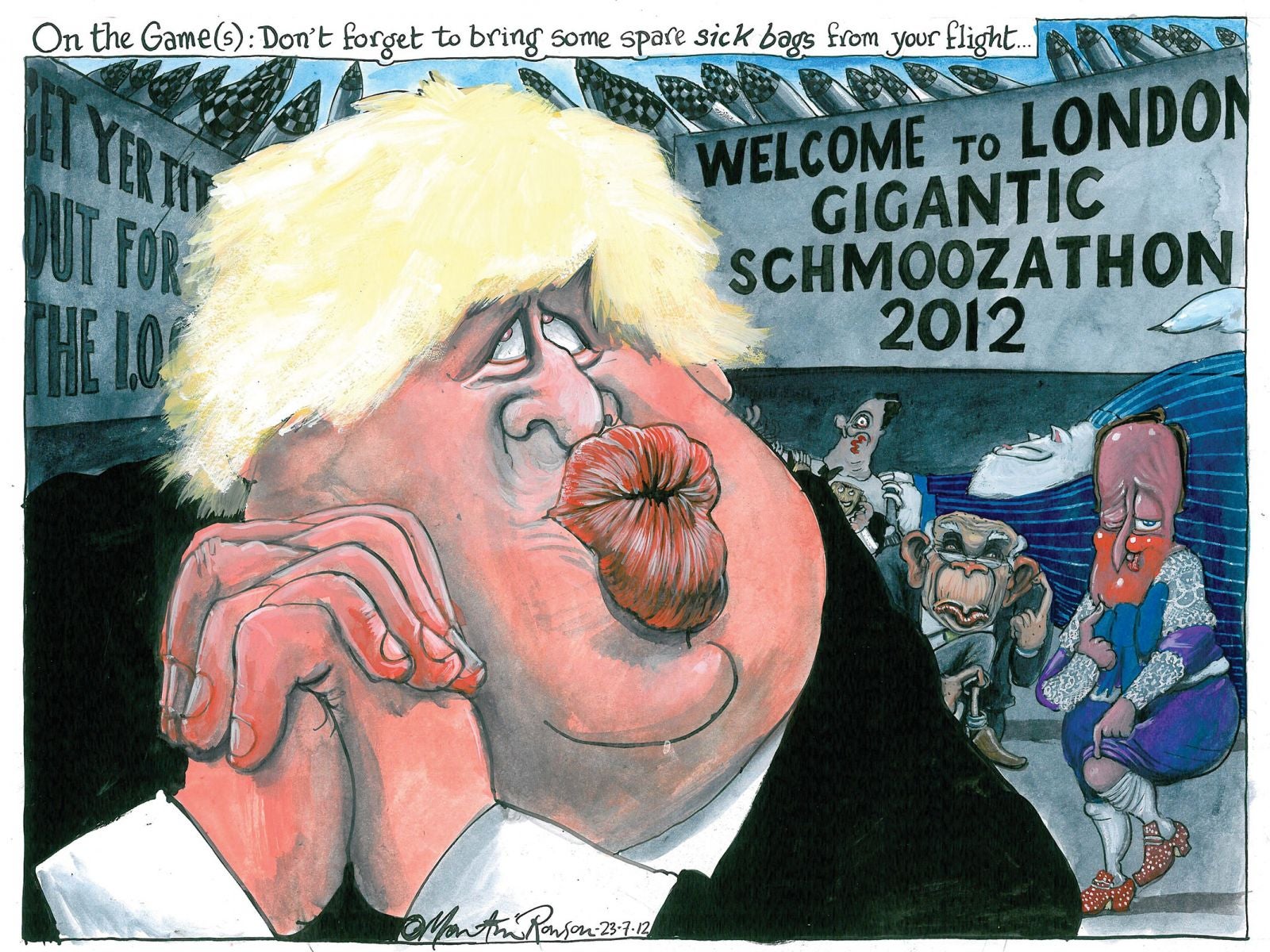 Pulling power, July 2012
Boris Johnson, the Mayor of London, invited the world to London for the summer Olympics, declaring it would be one “gigantic schmoozathon”. 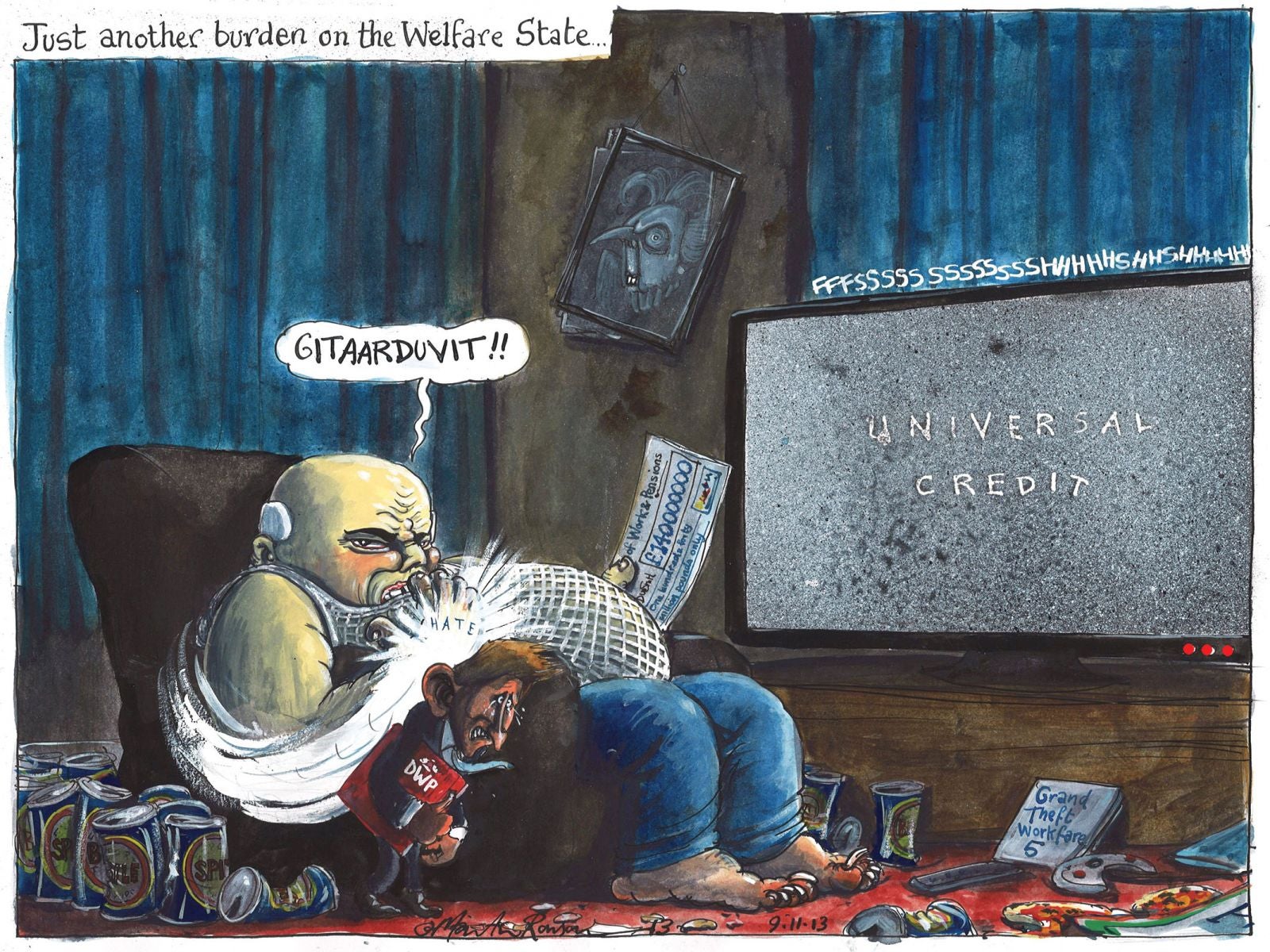 The Chingford bungler, November 2013
“The waste on IT costs for the still unimplemented Universal Credit had risen to £140m. Iain Duncan Smith blamed his civil servants.” 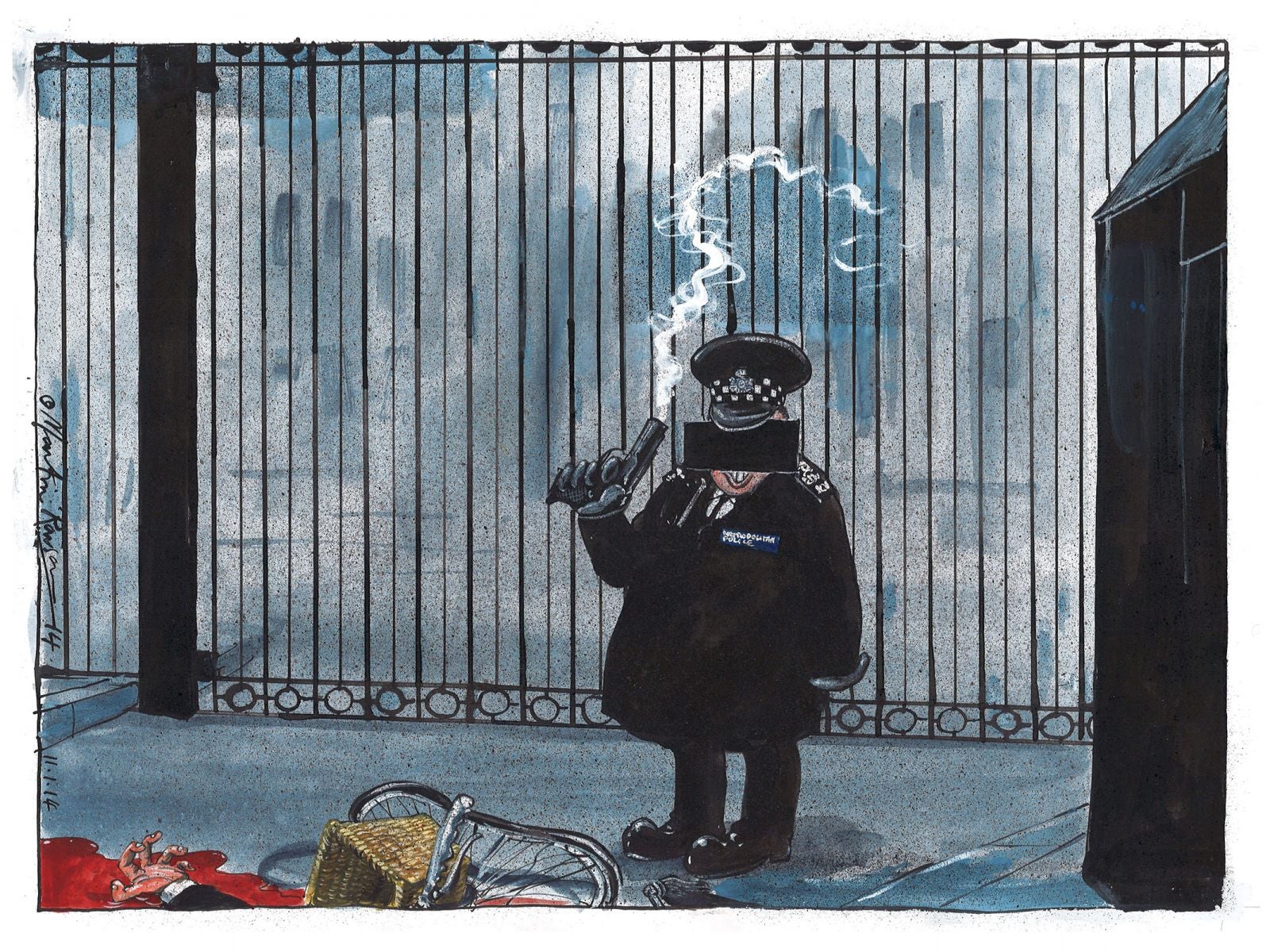 Downed by law, January 2014
“Two and a half years after he was shot, an inquest declared that Mark Duggan’s killing had been lawful. At the same time, Metropolitan Police officers were exposed as having fitted up Andrew Mitchell in the Plebgate scandal. Suddenly, an obvious solution to the second imbroglio presented itself.” 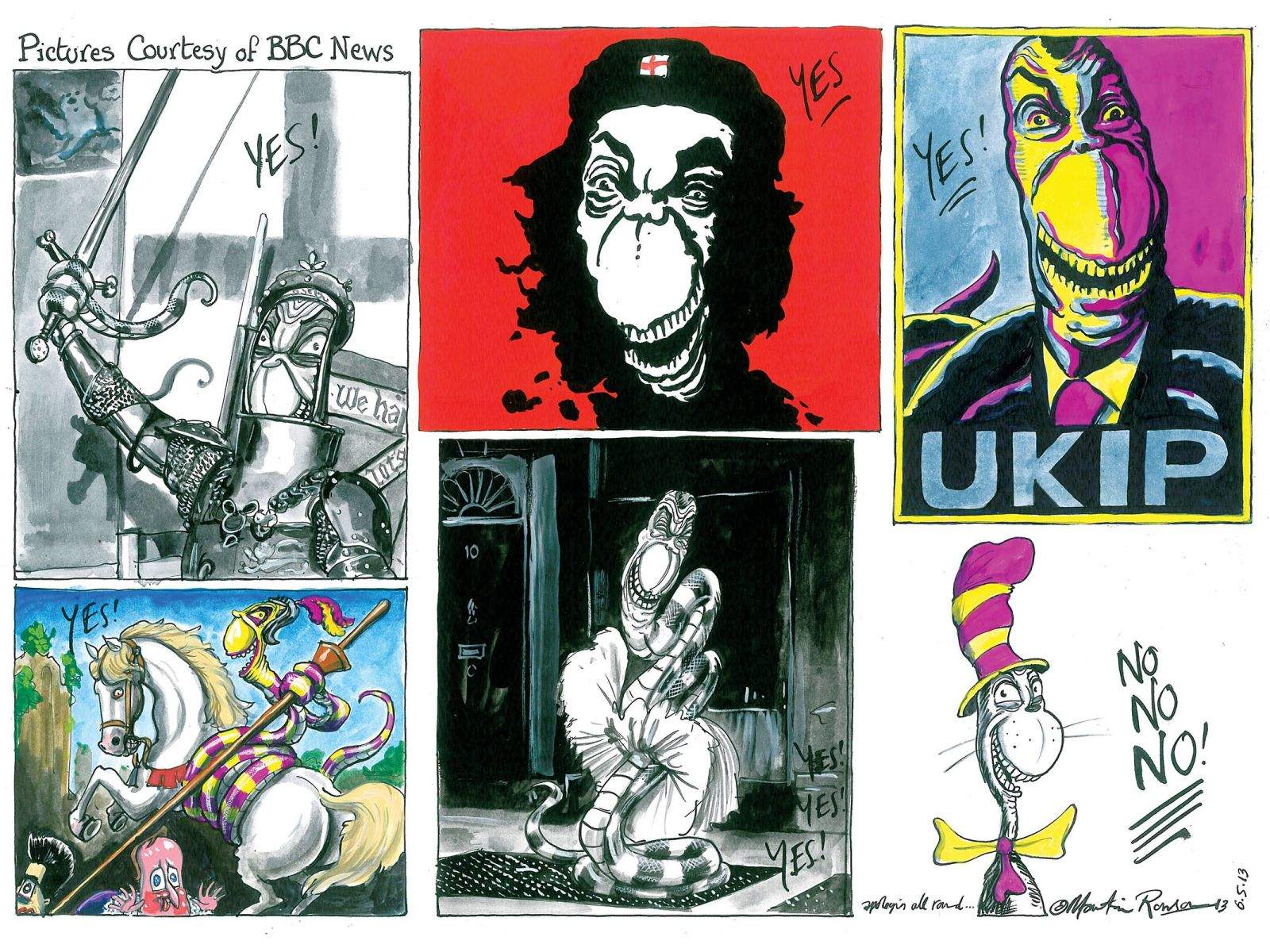 You kip if you want to, May 2013
“Ukip performed terrifyingly well in the local elections, after coming second in the 28 February Eastleigh by-election . . . Soon the BBC became completely obsessed with Nigel Farage.”

All pictures and captions from The Coalition Book (SelfMadeHero, £19.99), out now