Many people think that Europe’s governing classes, the people who formulate so many of the laws and regulations that govern our everyday lives, don’t know and don’t care what we, the governed, think. The perceived disconnect between us and the “bureaucrats in Brussels” is, I suspect, one of the big reasons for the miserably low turnout at European elections (43.1 per cent across Europe last May).

But as a matter of fact they actually have a pretty good idea what we think (whether they care is a question I will leave to others). Twice a year, the Eurobarometer survey is conducted at vast expense by the European Commission to gauge public opinion across Europe. A random sample of around 30,000 citizens is asked for views on everything from whether the EU generates too much red tape (Yes – 73 per cent) to whether we trust political parties (No – 78 per cent). It’s an extraordinary resource, full of informational gifts, and it usually garners no attention whatsoever. This may be because it consists of over 100 excel-unfriendly tables, I don’t know. The data for the most recent edition was published at the end of July, as usual to a barely audible grunt of disinterest from the press. But this is a window into the mind of Europe, and there was one potentially unsettling story that emerged:

Europe’s citizens increasingly believe that the worst of the euro crisis is behind them. For the first time since the euro crisis began, a larger number of Europeans, 47 per cent, think the impact of the crisis on jobs has peaked than the 44 per cent who think the worst is still to come. That may be good news for consumer confidence, but there is a sting in the tail. As the euro crisis has receded, the rationale for sacrificing national sovereignty at the altar of European reform is eroding too. Modest economic improvements and a grinding familiarity with crisis conditions look to be in danger of breeding complacency. The need for European reform appears to be getting gradually forgotten.

Support for Eurobonds down across the eurozone: 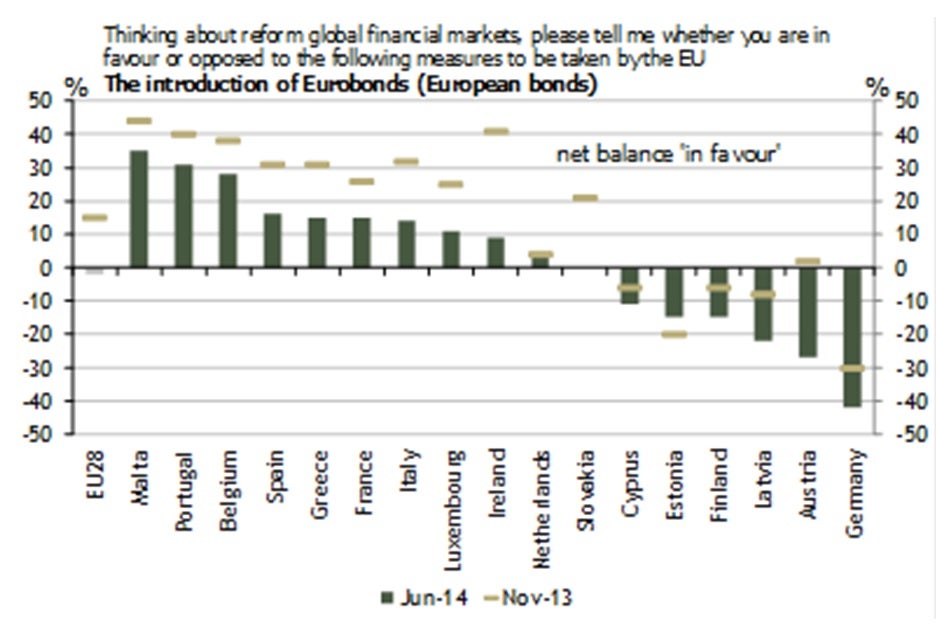 Opinion on the introduction of Eurobonds remains roughly split along creditor-debtor lines: the Core strongly opposed, while electorates in the likes of Spain, France and Italy remain, on balance, in favour, though expressing far weaker support than even nine months ago. Notably the weighted average for the whole EU is now in negative territory for the first time.

Net support for a financial transactions tax across the EU has fallen from 35 per cent to less than 10 per cent since November. Even among the eleven countries that have signed up for it support is dropping, with four now showing a negative net balance. Where previously the priority was to counter the threat of financial catastrophe, now it appears to have shifted towards reclaiming fiscal autonomy.

Support for a financial transactions tax also down: 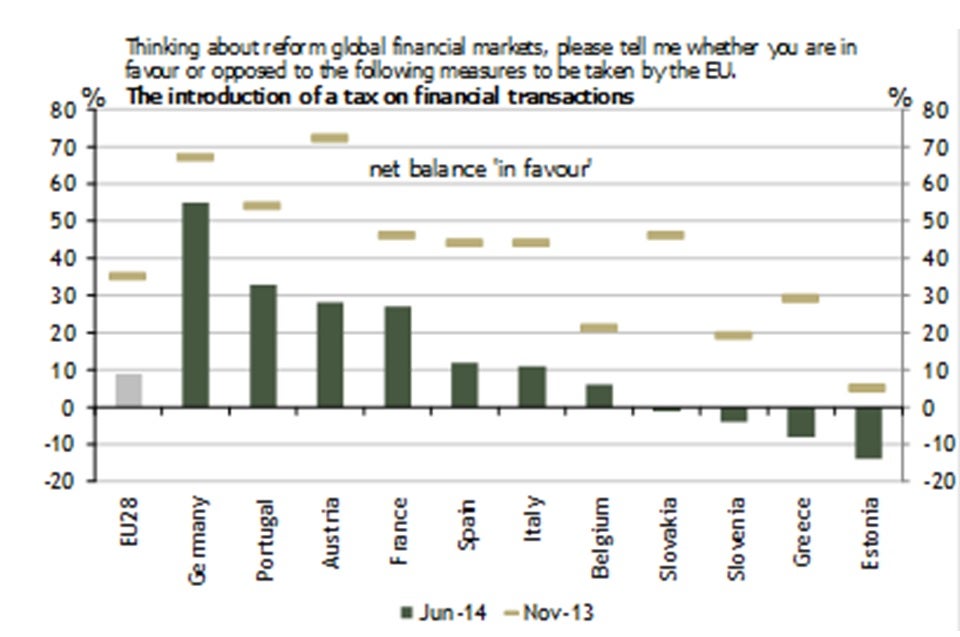 One chink of light for European reformers is the broad support that still exists for Europe’s most recent reform – banking union – though that too has drifted somewhat.

Support for banking union down but still high: 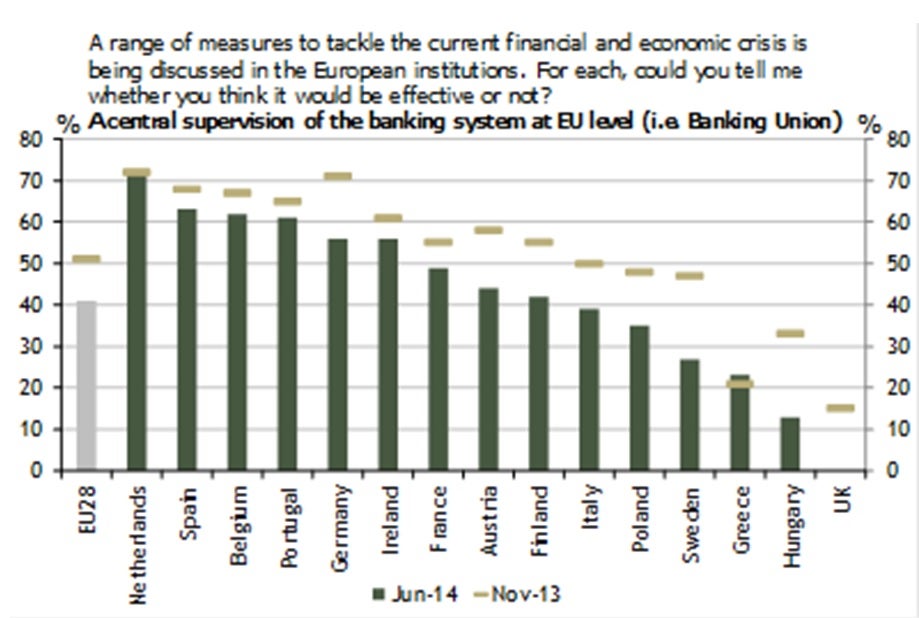 The sobering lesson from the latest Eurobarometer is that the time available to achieve European reform looks to be running out. May’s European elections, which saw an influx of eurosceptics to the European Parliament, were perhaps the most visible example of the falling appetite among European electorates for parties advocating a more integrated Europe. At the current rate, the focussing of minds required to reform Europe in order to avert the next crisis may fail to happen until the next crisis is upon us.