Moving towards the final year of this parliament, we have aggregated the results of our monthly Political Monitor polls from 2013 to evaluate how things have changed for each of the three main parties since May 2010.

We have used our data to compare the current voting intentions of the British public with the way they say they voted in 2010. In order to get a more accurate picture of how these intentions will be realised, we have focused on people who are certain to vote (as we do in our regular voting intention figures). For the purposes of this analysis, those who say they are not certain to vote are treated separately from those who are certain, even if they tell us which party they would vote for if they did vote.

For the Conservatives, there is good news and bad news. The good news is that they are not losing many votes to their traditional political rivals. Just 2 per cent of those who voted Conservative in 2010 would now vote Labour, with only 1 per cent now supporting the Liberal Democrats. This is despite the Conservatives consistently lagging behind Labour in the polls in 2013, averaging 31 per cent to Labour’s 38 per cent.

A further reason for Tory cheer is in evidence that talk of a Conservative “woman problem” has little basis – as also shown by other polls. Women are no more likely than men to be switching from the Conservatives, nor less likely to be switching to them. Among voters for the three main parties in the 2010 election, the intentions of men and women from each are identical with regard to Conservative voting – although as we have shown elsewhere, there are more differences when we look at sub-groups within the women’s vote. 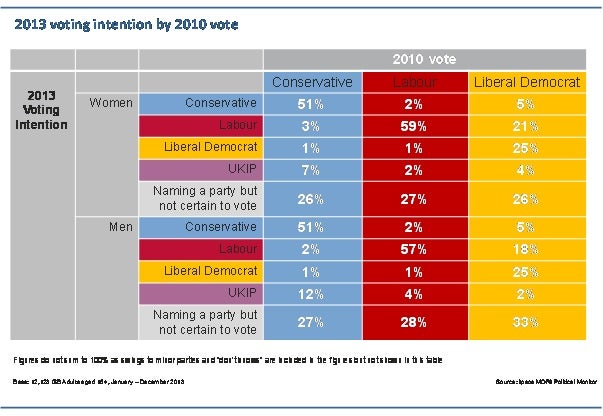 The bad news is that the Conservatives are losing votes in large numbers to another party – Ukip. 2013 saw Ukip rise as a serious electoral power on Britain’s political right. Last year 11 per cent of those certain to vote would have voted Ukip, up from 4 per cent in 2012. Many of those voters defected from the Conservatives – around one in eleven (9 per cent) of those who say they voted Tory in 2010 would have voted Ukip in 2013.

Women are less likely to have defected to Ukip, however – 12 per cent of men who voted Conservative in 2010 say they would have voted Ukip in 2013, compared with 7 per cent of women who did so. Indeed, the only party where we have seen a gender divide regarding vote swing – the only party with a potential “woman problem” – is Ukip.

For the Liberal Democrats, there is very little good news. In the polls they have been pushed consistently into fourth place. Just a quarter (25 per cent) of those who voted Liberal Democrat in 2010 would definitely have done so in 2013. They averaged 9 per cent of the total voting intention support across 2013, which, if realised in a uniform swing across the country would leave them with 25 seats – not the existential threat that some have predicted, but a comprehensive downturn and a threat to their potential kingmaker status. (In fact a uniform swing against the Liberal Democrats seems unlikely in any case – past experience suggests that their local campaigning and concentration of resources may help them out-perform the national party in many constituencies where they have an incumbent MP – but there is little way of testing that from national polls.) 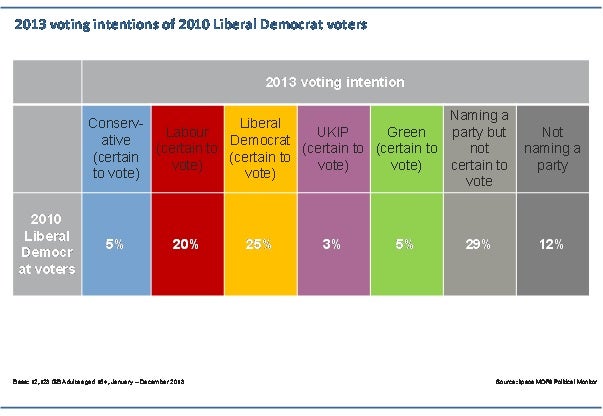 A fifth (20 per cent) of 2010 Liberal Democrats would have voted Labour in 2013, with 5 per cent each defecting to the Conservatives and Greens and 3 per cent supporting UKIP. Furthermore, on top of these gains, Labour are retaining supporters far more effectively than their rival parties. While the Conservatives face nearly a tenth of their 2010 vote (9 per cent overall) draining to UKIP, and the Liberal Democrats a fifth to the Labour Party itself, the greatest gain of 2010 Labour voters achieved by another party is 4 per cent (to UKIP, interestingly).

Labour now appear to be in the unusual position of having the least fractured support base of the main political parties. Where prior to 2010 the left was often perceived as split between Labour and the Liberal Democrats, with the Conservatives enjoying hegemony over the right, the Conservatives are now fighting UKIP for votes while the Liberal Democrats struggle to retain their own supporters as part of a right-leaning government. This is certainly a distinct advantage, and one Labour haven’t previously benefited from in modern times.

As we discussed earlier this year, Labour are also benefiting from an increased certainty to vote among their supporters, which has traditionally been an area of weakness. Prior to 2010, Conservative supporters were consistently more likely to say they were certain to vote, but this gap has narrowed substantially. There is now almost nothing to split 2010 voters for the three main parties with regard to current certainty to vote. 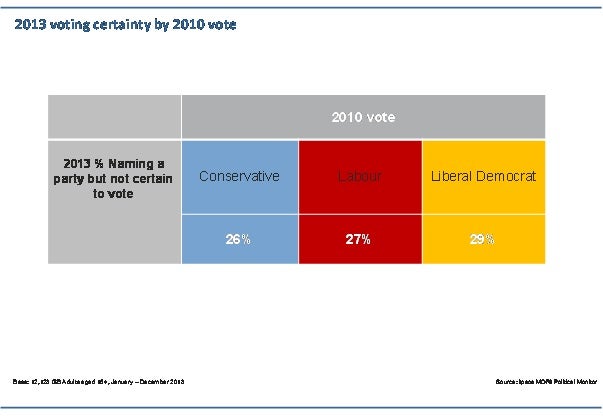 Going into the final year of this parliament, it looks likely that Labour will get more votes in 2015 than it did in 2010. However, much still remains uncertain. Given the loss of support for Labour under Gordon Brown, it may be suggested that anyone who voted Labour in 2010 would be bound to have remained Labour in 2013. However, while they are the best performing of the main three parties, even for them less than six in ten of Labour voters in 2010 (58 per cent) would be certain to vote for Labour in an immediate election; 51 per cent of 2010 Conservatives would still vote Conservative, and, as we’ve seen, just a quarter (25 per cent) of 2010 Liberal Democrats are still Liberal Democrat supporters. 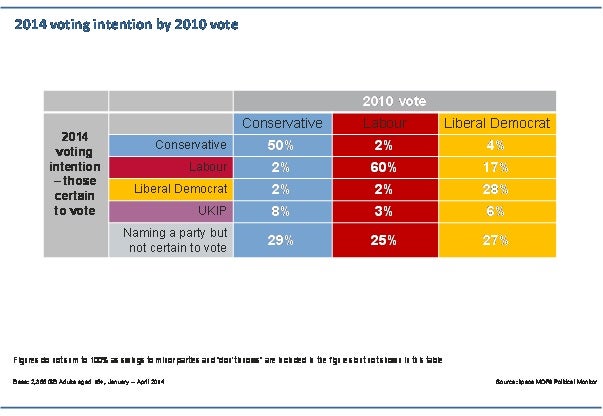 However, while the party swings in the electorate since the 2010 election so far favour Labour – and as our latest Political Monitor shows, Labour are maintaining their lead in the polls – there is a great deal of time for things to change again. The vote choices and turnout of those not currently certain to vote will have a great deal of sway over the next election.