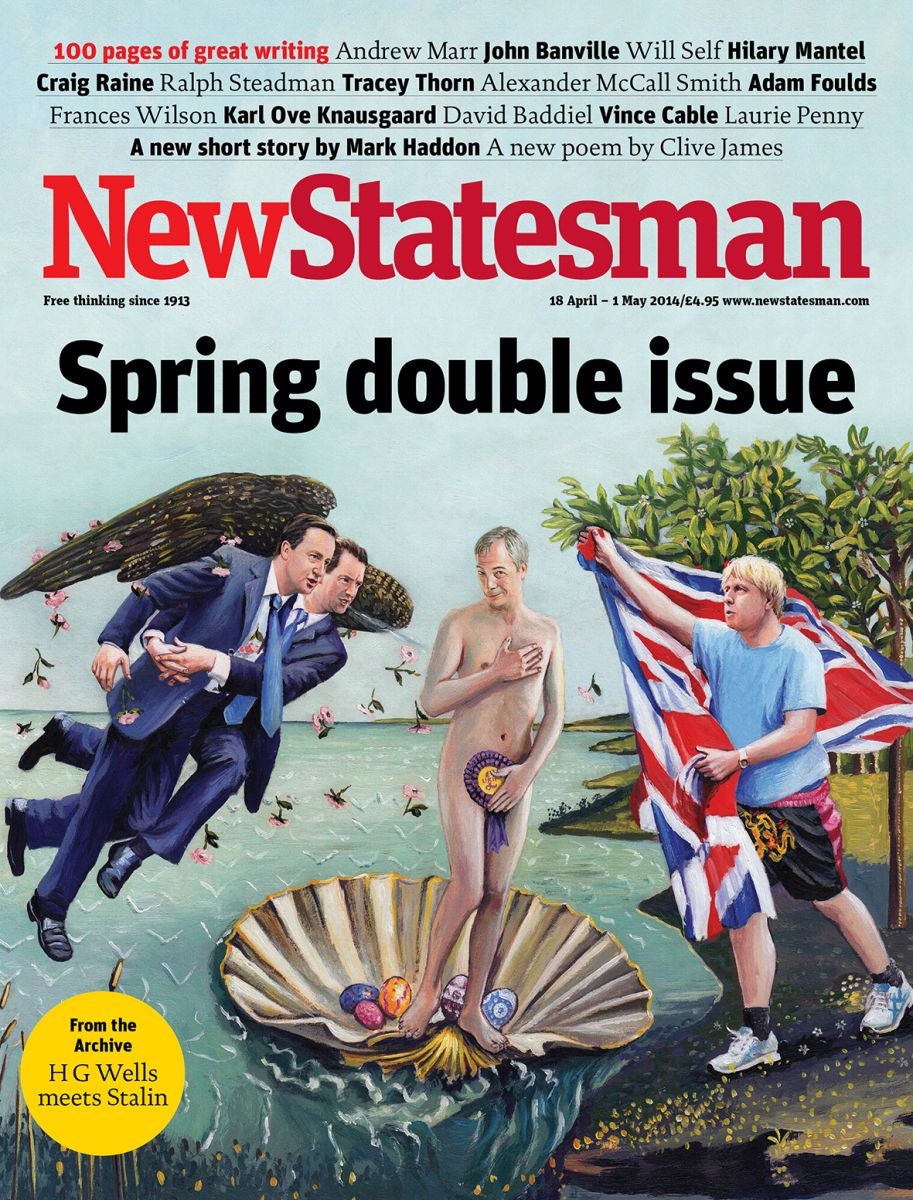 The double-Booker-winning novelist talks to the NS about the perils of being a female public figure with an opinion, finishing her Cromwell trilogy, and writing for the stage

Rafael Behr on Ukip: Militant England is on the march

Vince Cable: What makes us human?

George Eaton: No political party is immune from leadership speculation

Me, me, me: Andrew Marr on a new history of the self-portrait

From the archive: H G Wells meets Stalin in 1934

Jason Cowley on the rise of Sajid Javid

As the double-Booker-winning writer Hilary Mantel prepares for the transfer to London of RSC adaptations of her novels Wolf Hall and Bring Up the Bodies, she meets Erica Wagner to talk about writing for the stage, finishing her Cromwell trilogy – and the perils of being a woman with an opinion in the public eye.

Mantel recalls at length the furore and press intrusion that followed her comments about Kate Middleton in a lecture last year.

Anything she says is liable to be pounced upon by the press. This was most evident in February of last year, when a sophisticated lecture she gave at the British Museum (and which was then published in the London Review of Books) was interpreted, mainly by those who hadn’t even bothered to read it, as slagging off the Duchess of Cambridge – or “Princess Kate”, as Prime Minister David Cameron called her in an inept remark in her defence. A remark which made it perfectly clear that he hadn’t read the piece either. What does she think this whole fiasco said about the level of public debate in Britain?

She settles herself in her chair and folds her hands in her lap. “I think . . .” she smiles, coolly. “I think many things. I do think the level of public debate is debased. To know how far it is debased – well, you have to be on the receiving end of a hate campaign like that to know how bad it is. To be honest, it didn’t get to me or upset me as much as people might have assumed. It was very funny to have press camped out across the road in our quiet seaside town, and if the pressmen saw any fat woman of a certain age walking along the street, they ran after her shouting, ‘Are you Hilary?’ Pathetic! But it did furnish us all with a great deal of entertainment.

“Also, it taught me what I’ve long suspected: that public opinion is not something that features very highly in my life. Nobody should go into a trade like writing expecting applause, or universal approval, or even popularity. What appalls me is that people mistake this constant storm of trivial abuse for some kind of freedom. ‘Me, speaking my mind!’” Her tone is boldly dismissive. “It’s not. It’s actually a huge distraction of the bread and circuses variety. To a large extent proper civic engagement, community engagement, proper political debate and activism has been replaced by this. By illogic. By platitudes. And actually a lot of it is just abuse and bullying. There’s a nasty, narrow little conformism. And people are afraid, quite understandably, to differ from the norm. I think it’s a very sad state of affairs.”

There was a very personal and unpleasant aspect to the response to her perceived criticism of the Duchess of Cambridge’s appearance – plenty of people felt free to criticise hers. “Mary Beard has pointed out that if you are a woman who ventures an opinion in public, ‘You are fat and ugly’ is thought to be an adequate response. This is what I got all the time after the Kate business.

“And, you know, I’m 61. Do people think my self-esteem is invested in my personal appearance? If it was, I’d be an idiot!” She laughs.

The NS Essay: Rafael Behr on the rise of militant England

Rafael Behr, the NS political editor, argues that the UK Independence Party, which was viewed as the by-product of a Tory schism just a few years ago, now appeals to disillusioned voters across the political spectrum – and is animating a latent spirit of English resistance and anti-politics radicalism.

Mistrust of our national politicians is nothing new. Even in times of economic buoyancy, there is a curmudgeonly strain in British culture that thinks the country is going to the dogs. What seems different today is the tendency to see politics itself as not only disreputable but an organised conspiracy against decency . . .

Much more is at stake here than the outcome of the next general election. There is a ceiling on the level of support Ukip can reach, set by its own hostility to swaths of modern Britain. The party’s organisation is currently inadequate to the task of reaching its full potential. Farage’s energy may flag. His bubble could burst. The energy that inflated it will not then dissipate. Politics has already been changed by it.

We are witnessing the start of a battle to decide the character of English national identity in the 21st century, and Ukip is dictating the terms. It threatens an inversion of the old liberation struggles, with white men revelling in supposed victimhood and pluralist politics cast in the role of a colonising power to be overthrown. Tolerance and liberalism, both of which have deep roots in England, are on the defensive.

The constituency that feeds Farageism is radical and disruptive. It believes itself to be under attack and it wants to fight back. This is not Little England. It is Militant England and its march is unopposed.

George Eaton, the editor of the NS’s Staggers blog, examines the current fashion for leadership speculation. He notes that none of the three main parties can afford to neglect the matter of succession as the general election approaches:

In 13 months’ time, at least one and possibly two of the three main parties will be preparing to hold leadership contests. The days when a leader could survive election defeat, as Harold Wilson did in 1970 and Neil Kinnock did in 1987, are gone. In this populist age, rejection by the voters is terminal.

But such is the uncertainty surrounding the general election result, with all three parties enjoying a plausible hope of being in government after 2015, that no one can be sure where the axe will fall. While preparing for victory, the Conservatives, Labour and the Liberal Democrats have also been forced to start preparing for defeat.

Vince Cable: What makes us human?

The Business Secretary, Vince Cable, is the latest contributor to our “What Makes Us Human?” series, published in partnership with BBC Radio 2’s Jeremy Vine show. As he considers the key to his own humanity, Cable recalls jiving in the USSR and swaying to love songs in the nightclubs of Nairobi.

In an original essay written for the New Statesman and translated into English from the Norwegian, the author Karl Ove Knausgaard recalls springtime in his suburban youth:

. . . the greatest sign of spring of all was the smell of burning grass that spread all over the housing development during these weeks. The cool evenings, the bluish dark, the cold which rose from the ditches that were still filled with snowdrifts, hard as ice and with gravel embedded in them, the steady hum of children’s voices, playing outside, some running after a ball on the road, others bicycling up and down ditches or rearing up on the sidewalk, all of them bubbling with life and lightness, for you were suddenly free to run, to bicycle, to shout, to laugh, and always in your nostrils there was the stinging yet rich smell of last year’s withered grass burning, which was suddenly everywhere. Once in a while we would run up and watch; the low, dense flames resembled orange waves, almost moist in the intensity of colour brought on by the evening dusk, guarded by a proud mother or father, often with the handle of a rake over their shoulder and gloves on their hands, like an order of knights of the lower middle class.

As spring arrives and the referendum on Scottish independence draws closer, the novelist Alexander McCall Smith observes how sometimes it is best to let go of baggage and distance ourselves from the past:

This year it would be impossible to ignore the centenary of the outbreak of the First World War. That war was an appalling disaster, but is it still “potent” history, in the sense that it affects the modern world? The answer to that must be yes: many of the contours of the modern world are the discernible result of that conflict. Going back into the 19th century, one will find plenty of historical events that still cast their shadow today, but the further one reaches into the past the safer it is to relegate matters to “inactive” history. This distancing of ourselves from the past is necessary if we are to face the world without the clutter of too much historical baggage . . .

Should we have some sort of 100-year rule, akin to the rule that allows official papers to be opened to historians after a certain period? That would relieve Britain of current blame for the concentration camps of the Boer war but not for the treatment of prisoners during the Mau Mau uprising in Kenya.

This is not to say, though, that we should forget entirely; rather it is to suggest that we should not hold any current states or groups accountable for what happened in the distant past. As a Scot, I rather doubt that the Highland Clearances can be laid at the door of anybody who is around today, although I know that there are those who would put the spotlight on those descendants of landowners who still enjoy ill-gotten gains. Nor do I think that we should invest too much emotion in Bannockburn, another anniversary coming up this year. We have a referendum in September at which we do not really need to think too much of William Wallace.

John Niven on Britpop at 20: my part in music’s last great gold rush

Will Self: Why breakfast cereals are the “great granular underlay” of civilisation