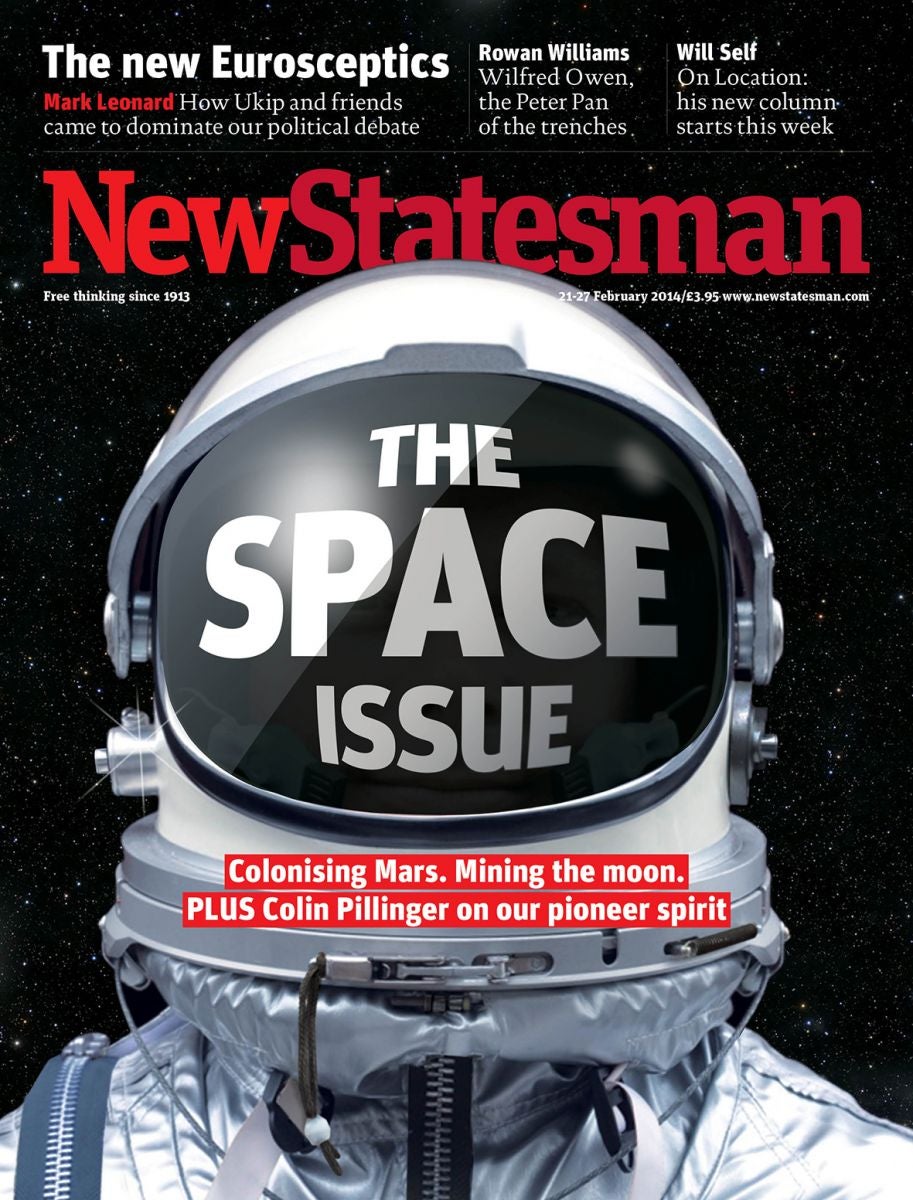 Helen Lewis asks: Who would take a one-way trip to Mars?

Michael Brooks on the lunar land-grab

The planetary scientist Colin Pillinger considers what makes us human

Mark Leonard on the rise of the new Eurosceptics

Rowan Williams joins the NS as a lead book reviewer: Wilfred Owen and the boy soldiers of the First World War

Will Self drifts upstream to Shepperton in the first column of his new psychogeography series, “on location”

The first Scandi drama: Ronald Hutton on the Vikings

THE SPACE ISSUE: MISSION TO MARS AND THE LUNAR LAND-GRAB

This week’s NS explores the 21st-century space race, which has been reinvigorated ten years after the explosion of the Columbia space shuttle, a nadir in the US space programme. For the cover story, Helen Lewis reports on the “next big prize” in this race – the quest to colonise Mars:

“I want to die on Mars,” said Elon Musk last year. “Just not on impact.” The 42-year-old was not being flippant; he plans to use the $9bn he acquired through business ventures such as the online payment system PayPal to leave earth’s orbit for ever. He believes it is the only way for the human race to guard against the fragility of life on a single planet, at the mercy of a supervolcano, asteroid strike or nuclear war.

Musk’s enthusiasm has energised a new phase of the space race: the conquest of Mars . . . around the world, an unlikely alliance of tech billionaires, state agencies and private contractors is increasingly confident that, within 20 to 30 years, human beings will once again be striking out further than anyone has gone before.

Lewis meets some of the scientists tasked with making the mission to Mars possible, considers how it will be financed, and concludes that the race to the Red Planet is no longer the stuff of science fiction:

Whatever the challenges in getting to Mars, everyone I asked was confident that they were not insurmountable. “I’d say 2040 is a reasonable guess [for the first flight],” says [the astronaut Tom] Jones.

The pioneering spirit that took us to the top of Everest and the bottom of the sea, that drives people to spend the winter imprisoned on an Antarctic research base, will always win out. Despite the risks – perhaps because of the risks – there are people alive today who probably will die on another planet. They’ll look up at the pale blue dot in the sky and, unlike any generation before them, that planet won’t be their home.

Meanwhile the NS science columnist, Michael Brooks, reports on how the moon’s rich mineral resources and a series of legal loopholes around the “beyond-earth behaviour of nations and private companies” make a lunar land-grab inevitable:

The Chinese think the moon’s minerals might be worth extracting. “They are looking at feasibility for mining the moon, and they are likely to do it if there’s a strong business case,” says Richard Holdaway, director of the space division at the UK’s Rutherford Appleton Laboratory, which collaborates closely with China’s space programme.

There would be nothing illegal about such an operation because international laws covering the moon are “way, way behind”, as Holdaway puts it. In theory, anyone who could manage it (and afford it) could go to the moon tomorrow, dig out a huge chunk of lunar rock, bring it back to earth and sell it off to the highest bidder. The Chinese could take the moon apart and sell it bit by bit without breaking international law. The question we have to ask ourselves is simple: do we see a need to prevent that happening?

It’s not just the Chinese who have ambitions in this direction. Some private companies also have their eye on lunar rock as a source of riches. Most are based in the US, and they are actively working on lunar landers that will eventually be able to perform mineral extraction.

Colin Pillinger, a former planetary scientist at the Open University and principal investigator for the Beagle 2 Mars lander project, is the latest contributor to our “What Makes Us Human?” series, published in association with BBC Radio 2’s Jeremy Vine show. For Pillinger, the answer lies in our pioneering spirit, our curiosity and our essential nosiness:

What makes us human? In my case, “us” means scientists. Scientists, like all human beings, are curious: but we are real nosy parkers. And like the lady in the corner house on the street where I was a kid, who hid behind her aspidistra to watch the comings and goings of everyone in the neighbourhood, we like to tell people what we’ve found out . . . any typically nosy human being can become a scientist and share the fun I’ve had.

THE NS ESSAY: THE RISE OF THE NEW EUROSCEPTICS

For this week’s NS Essay, Mark Leonard, the founder and director of the European Council on Foreign Relations, the first pan-European think tank, explores how the UK Independence Party and its friends have succeeded in making Euroscepticism a popular cause:

The genius of the new Eurosceptics has been their ability to turn the arguments of pro-Europeans on their head, so that each triumph has become an argument against the EU. Old-fashioned sceptics such as John Redwood and Bill Cash used to accept that the EU was good for the British economy but baulked at the loss of sovereignty. The new Europhobes put things the other way round: in place of old arguments about European superstates destroying British sovereignty, Eurosceptics have a narrative about Britain “tethered to the corpse” of the eurozone (the evocative phrase of the fiercely independent Conservative MP Douglas Carswell).

Douglas Carswell looks more like a cartoon villain than a romantic idealist, yet he is behind the most dramatic shift in Euroscepticism: its appeal to Britain’s younger pioneers. A libertarian, self-styled radical and advocate of localism, he first came to prominence when he pleaded with Westminster to clean up following the expenses scandal. Since then, however, he has brought a technological utopian bent to Europhobia, making it seem more modern in the process, and so potentially appealing to younger people who are not natural Tories . . . it is the Europhobic pioneers who have potentially the most disruptive arguments. By claiming that Europe is a bureaucratic monolith in an age of global networks, they have the greatest ability to transcend the older, more conservative ghetto of traditional Euroscepticism and create a wider coalition.

In the Politics Column this week, the NS political editor, Rafael Behr, argues that although Westminster should be tackling the current upsurge in hereditary privilege, it is woefully ill-qualified to debate how wealth and power are stitched up in Britain.

There is a shortage of qualified agitators. The alarm is raised by people on the left who are mostly squeamish about their own privileges and are liable to be called hypocrites by those on the right who want to believe that skill, not luck, delivered them into lofty positions . . .

There is no guarantee that fair distribution of opportunity will even be a factor in the election. Ed Miliband will try to force it on to the agenda. The Conservatives will reject it as camouflage for the old class envy. Then the jury of generously remunerated opinion-mongers, cloistered in characterful London period properties, will ponder whether it is truly the case that all the advantages flow to the already advantaged, and declare, in tones most dispassionate, that it is not.

LINES OF DISSENT: MEHDI HASAN ON THE REAL WELFARE SCANDAL

In his Lines of Dissent column this week, Mehdi Hasan, exposes the real Benefits Street scandal – the corporate scroungers who are lapping up public subsidies and government contracts:

From The Big Benefits Row to Benefits Street, everyone in the media seems to want to talk about welfare these days. Or, more accurately, social security.

In an age of austerity, I won’t pretend to be surprised by the obsession with welfare and so-called “welfare dependency”, but there is a point worth making here: why do we obsess over handouts for the poor, rather than handouts for the rich? Why isn’t the scandal of corporate welfare the subject of fly-on-the-wall documentaries, too? When will my former colleagues at Channel 4 air a series called Bankers’ Street?

Ignore the media misinformation: spending on out-of-work benefits isn’t out of control, nor is the welfare state responsible for growing poverty . . . So let us turn instead to the real scandal, the issue that dare not speak its name: corporate welfare. Where is the ministerial or media anger over the activities of G4S and Serco, which are accused of ripping off the taxpayer but which make millions from lavish government contracts? Where are the howls of outrage over taxpayer-funded payouts to the fossil-fuel industry? The Met Office’s chief scientist may believe “there is a link” between the recent floods and climate change but the government continues to subsidise the coal, oil and gas industries to the tune of £2.6bn a year. Why are the rail company bosses not household names in the same way as White Dee or Smoggy from Benefits Street?

THE CRITICS: RONALD HUTTON THE VIKINGS

In this week’s Critics section, the historian Ronald Hutton reviews the British Museum’s exhibition “Vikings: Life and Legend” and concludes that these early-medieval Scandinavians were pioneers of globalisation, with many of the same preoccupations as we have:

The exhibition implicitly proclaims the importance of globalisation, the value of technology (in this case ships) in bringing peoples together, the power of fashion in forming identities and self-expression, the ability of consumer goods to unite people regardless of language or ethnicity, the benefits of keeping good relations with the new Russia and the need to respect Islam. It is a snapshot of the preoccupations of the intellectual British psyche in 2014.