Liam Fox’s call for the ring-fence around NHS spending to be removed is one that is likely to attract much sympathy from Conservative activists. There is a common view that the health service, one of just two departments (the other being International Department) to have had its budget protected in real-terms, has been unfairly shielded from austerity, with even some on the left (among them Vince Cable) calling for cuts.

In reality, the reverse is the case. Owing to the above-average rate of health inflation (most notably the cost of new drugs and medical equipment), the NHS requires real-terms rises just to stand still. As a recent Social Market Foundation paper noted, “A ‘flat real’ settlement for the NHS is mot what it sounds like since it is defined with reference to an irrelevant price index. To keep up with rising input costs, growing demand, and the public’s expectations for an adequate healthcare system, growth in spending on health has historically outstripped GDP growth.”

By historic standards, the NHS is undergoing austerity. Since 1950, health spending has grown at an average annual rate of 4%, but over the current Spending Review it will rise by an average of just 0.5%. As a result, in the words of the SMF, there has been “an effective cut of £16bn from the health budget in terms of what patients expect the NHS to deliver”. Should the NHS receive flat real settlements for the three years from 2015-16 (as seems probable), this cut will increase to £34bn or 23%.

If they wish to avoid a significant fall in the quality and quantity of services, this government and future ones are left with three choices: to raise taxes, to cut spending elsewhere, or to impose patient charges. Fox argues that “we’ve tested to destruction the idea that simply throwing lots more money at the health service will make it better”, but this ignores the significant improvements that health researchers found to have taken place under Labour (with patient satisfaction rising to a record high as a result). 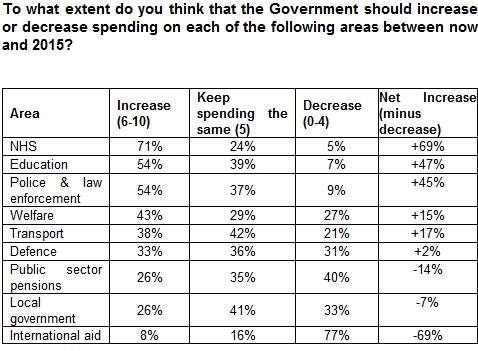 If that is reason enough for the Tories to avoid cutting NHS spending, it would also be terrible politics. As a ComRes/ITV News poll found last year, health is the most popular spending area among voters. Just 5% of voters believe the NHS budget should be reduced and 71% believe it should be increased. There is no prospect of Cameron and Osborne handing Labour a pre-election gift by pledging to cut spending.

Incidentally, it’s worth correcting the myth, encouraged by Cameron, that Labour would have cut the NHS had it won the last election. In fact, in 2010, then-health secretary Andy Burnham pledged to protect spending, the difference being that the Tories promised to increase it. Burnham helpfully clarified this in an interview with the NS in 2010.

Why shouldn’t NHS spending be ring-fenced?

So your argument is that ring-fencing it in isolation makes it nonsense?

They’re not ring-fencing it. They’re increasing it. They’re doing two things: they’re accelerating the reduction in public spending, which I wouldn’t have done, and they are also going to increase the NHS within that. So they went through the whole election campaign boasting that they were going to spend more than me and they’re still doing it. Cameron’s been saying it every week in the Commons: “Oh, the shadow health secretary wants to spend less on health than us.”

It’s worth remembering that when Ed Balls announced his “zero-based” spending review (one that examines every item of spending), he signalled that health would be a candidate for a “pre-election spending commitment”. Expect the Tories to adopt much the same approach.