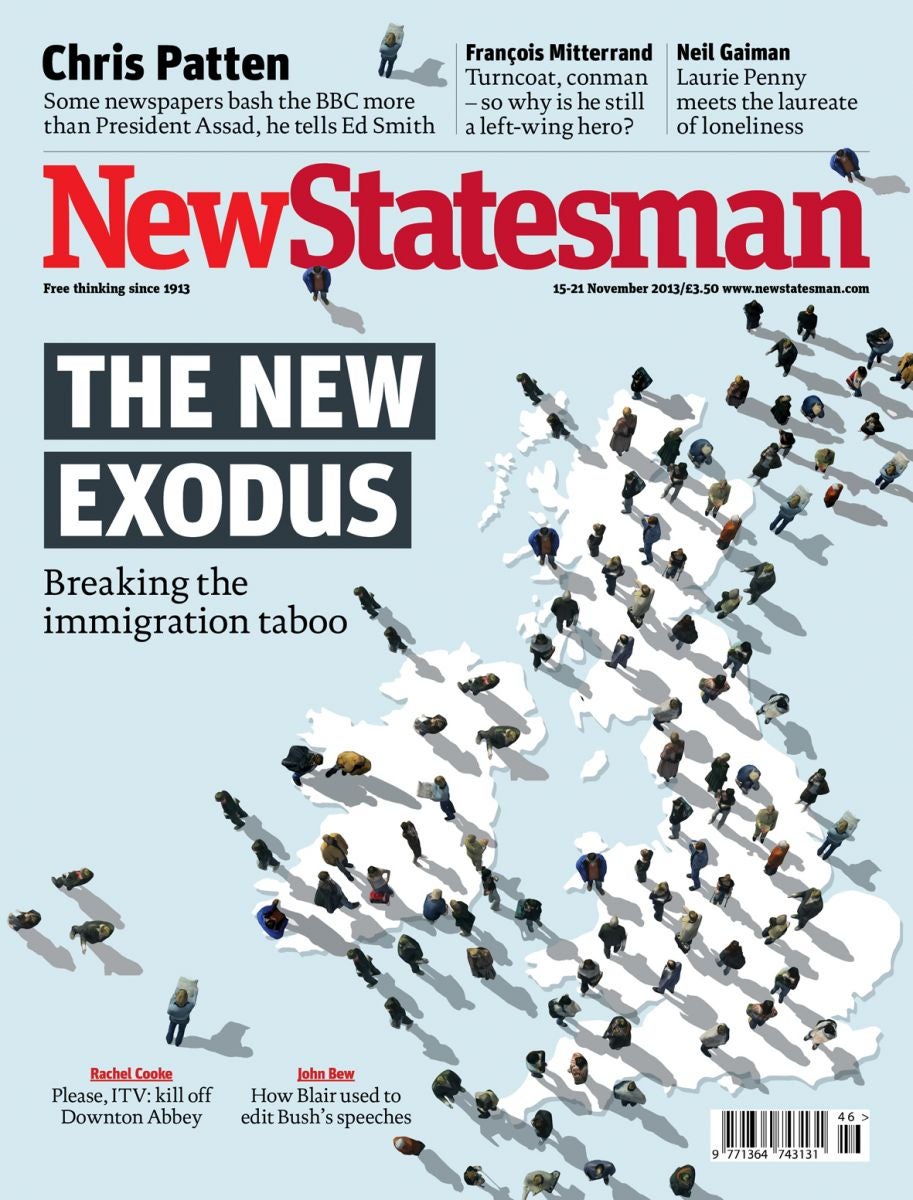 – INTERVIEW WITH THE NS’s ED SMITH

On the pay-off scandal: “This is not the most outrageous example I can think of mortal sin.”

On BBC-bashing in the press: “In some newspapers the BBC gets bashed more than President Assad. It’s extraordinary.”

JOHN BEW’S LETTER FROM WASHINGTON: DUBBYA RETURNS TO THE FRAY

THE POLITICS COLUMN: JEREMY HUNT WANTS TO DO FOR THE NHS WHAT GOVE DID TO SCHOOLS – HOW SHOULD LABOUR RESPOND?

GEORGE EATON: “WE NEED HELP TO BUILD, NOT HELP TO BUY”

In a frank and robust interview in this week’s New Statesman, Chris Patten, chairman of the BBC Trust, tells Ed Smith he wants to see the BBC’s self-confidence and moral authority restored after a series of blows to the organisation including the Savile affair and the executive pay-off scandal:

“The BBC is the only institution that I’ve been associated with that gets a sense of Schadenfreude about its own problems or mistakes. It beats itself up more. I think we should start to be more positive about ourselves. People get a fantastic service for 40 pence a day. I think the important thing for the BBC is not to lose its nerve. My friends from around the world are amazed that BBC is in the headlines so much. They assume this must be an organisation that everybody is exceptionally proud of. Well, sensible people are.”

Patten contrasts the high regard in which the BBC is held around the world with the way it is pilloried by certain sections of the British press:

“I was thinking the other day that in some newspapers the BBC gets bashed more than President Assad. It’s extraordinary.”

Patten uses the interview to hit back at Grant Shapps, chairman of the Conservative Party, who last month launched a cynical attack on the BBC, questioning the future of the licence fee. Patten was appalled by what he calls the “mis-Shapp”:

“We were appearing in front of a select committee the other day, we’re always appearing in front of select committees, I think we’re now up to 17 in a year, on one issue or another. I said what had surprised me during my period as chairman of the Trust was on the whole the lack of political pressure from anybody. And then just to make it look as though I was a cloth head, the chairman of the Conservative Party launched himself into an exceptionally ill-judged attack on the BBC. . .The chairmen of the Conservative Party invariably have a bash at the BBC in the run-up to elections. I have to say to my eternal shame I did the same. But what was odd [about Shapps’s intervention] was publicly linking an attack on a journalist [the BBC home editor, Mark Easton] with the BBC as whole and the licence fee.”

Patten on the pay-off scandal:

“No-one – nobody sensible – would argue that the way that severance pay had been handled had been other than messy and shabby. It was wrong. The worst damage has been inside, because people have seen their budgets being squeezed and [also] these big pay settlements. Some of these severance payments raised . . . well, not just eyebrows . . .”

“If you then look at a period of seven years from 2006 to 2013, people who left and were paid more than they were contractually entitled, that totalled £6.8m. Which is about what you’d have to pay to televise a football match. This is not the most outrageous example I can think of mortal sin. . . But it was wrong. And it stopped. And it won’t happen again.”

On BBC bureaucracy and creativity:

“That’s exactly what Tony Hall is trying to do at the moment. Strip out some of those layers of bureaucracy that have, among other things, a deadening effect on creativity. . . We definitely have to be faster on our feet.”

“The best drama I’ve seen since I’ve been in this job is the Tom Stoppard Parade’s End, which I thought was magical. Downton Abbey is a huge success. But I’m glad that we made Parade’s End, not Downton. So there is a lot [of good programming] but there needs to be more.”

On his hopes for the BBC:

“Success would be that the BBC was on the way to renewing the charter, at a reasonable licence fee level, which would enable it to go on producing the kind of programming it does now. And for the levels of trust in the BBC to have consolidated and stabilised; I’d like them to be even higher. It’s a great national treasure and it’s important that it should act like a national treasure and be regarded as – not beyond criticism – but as something that we can be reasonably proud of.”

In a controversial essay for the NS, Paul Collier, professor of economics and public policy at Oxford University and author of the new book Exodus: Immigration and Multiculturalism in the 21st Century, argues “liberal intellectuals who dismiss concerns about future migration. . .are being cavalier at other people’s expense” and declares the “noble vision” of multiculturalism incompatible with an egalitarian society.

Collier argues it is time for a sensible conversation about immigration and wants to break the taboo surrounding its discussion:

“Ever since Enoch Powell’s “rivers of blood” speech in 1968, serious discussion of migration has been taboo in British social science. I lost count of the number of times I was cautioned while writing my book Exodus not to include anything that could be ammunition for Ukip. In other words, I was told to write yet more policy-based evidence. British migration policy is too important and in too much disarray for this to be defensible.”

He argues that the multiculturalism model is incompatible with a fair deal for the “indigenous population”:

“Liberal intellectuals want to combine rapid immigration, the multiculturalism that entitles migrants to remain within a distinct cultural community, and an egalitarian society. This is a noble vision but unfortunately the desirability of a policy combination does not ensure that it is technically possible.”

Refusing to accept this is, says Collier, an indulgence we cannot afford:

“Liberal intellectuals who dismiss concerns about future migration, as distinct from the complaints about its past effects, are being cavalier at other people’s expense. It is the indigenous poor, existing immigrants and people left behind in the countries of origin who are potentially at risk, not the middle classes.”

In this week’s column, Rafael Behr, NS politics editor, explains that Jeremy Hunt, the Health Secretary, hopes to deal with the winter NHS crisis by positioning himself “as the champion of patients against an unresponsive health bureaucracy”:

“Jeremy Hunt, the current Health Secretary, has a third way. He aims to position himself as the champion of patients against an unresponsive health bureaucracy. He takes as his model the approach that Michael Gove has adopted for schools, casting himself as the scourge of complacency in a system that cherishes mediocrity and cares only about doing things the way they have always been done. ‘Jeremy is always going on about what Michael is doing at Education,’ says a senior Department of Health insider. That is the impulse behind calls for Ofsted-style regulation of hospitals and for GPs to offer more appointments outside working hours. Hunt treats problems in the NHS as evidence of the need for reform. Labour says he is dumping responsibility for the fiasco on doctors and nurses.”

Rachel Cooke watches the final Downton episode – will ITV realise how bad a writer Julian Fellowes is or keep flogging this dead horse?