We can at least commend Boris Johnson for his candour. Unlike those in his party who hide behind euphemisms and platitudes, the mayor presented rampant inequality as both inevitable and desirable in his Margaret Thatcher lecture last night. Differences in IQ, the efficient operation of the free market and the need for economic incentives all meant it was “futile” for politicians to even try to narrow the gulf between the rich and the rest. “Whatever you may think of the value of IQ tests it is surely relevant to a conversation about equality that as many as 16% of our species have an IQ below 85 while about 2% have an IQ above 130,” he said, oblivious to the fact that this gap isn’t the cause of inequality but the result of it.

But while delivering this bleakly Hobbesian message, he attempted to sweeten the pill by echoing John Major’s lamentation of stagnant social mobility and calling for a dramatic expansion of opportunity. In one passage he remarked:

I worry that there are too many cornflakes who aren’t being given a good enough chance to rustle and hustle their way to the top. We gave the packet a good shake in the 1960s; and Mrs Thatcher gave it another good shake in the 1980s with the sale of the council houses. Since then there has been a lot of evidence of a decline in social mobility, as Sir John Major has trenchantly pointed out.

It seems to me that though it would be wrong to persecute the rich, and madness to try and stifle wealth creation, and futile to stamp out inequality, we should only tolerate this wealth gap on two conditions. One, that we help those who genuinely cannot compete; and two, that we provide opportunity for those who can

But his presentation of social mobility as a form of compensation for inequality was almost comically inappropriate. As anyone with the most cursory grasp of the subject knows, reduced opportunity is the inevitable result of greater inequality: it’s harder to climb the ladder when the rungs are further apart. As the empirical masterpiece The Spirit Level showed (see graph), it is the most unequal countries, such as the UK and the US, that have the lowest levels of social mobility, while the most equal, such as Sweden, Canada and Japan, that have the highest. In the case of Britain, it was after Boris’s heroine took office, and the gap between the rich and the poor became a chasm (the gini coefficient rose from 12.9 in 1978 to 22.2 in 1990), that social mobility began to stagnate. 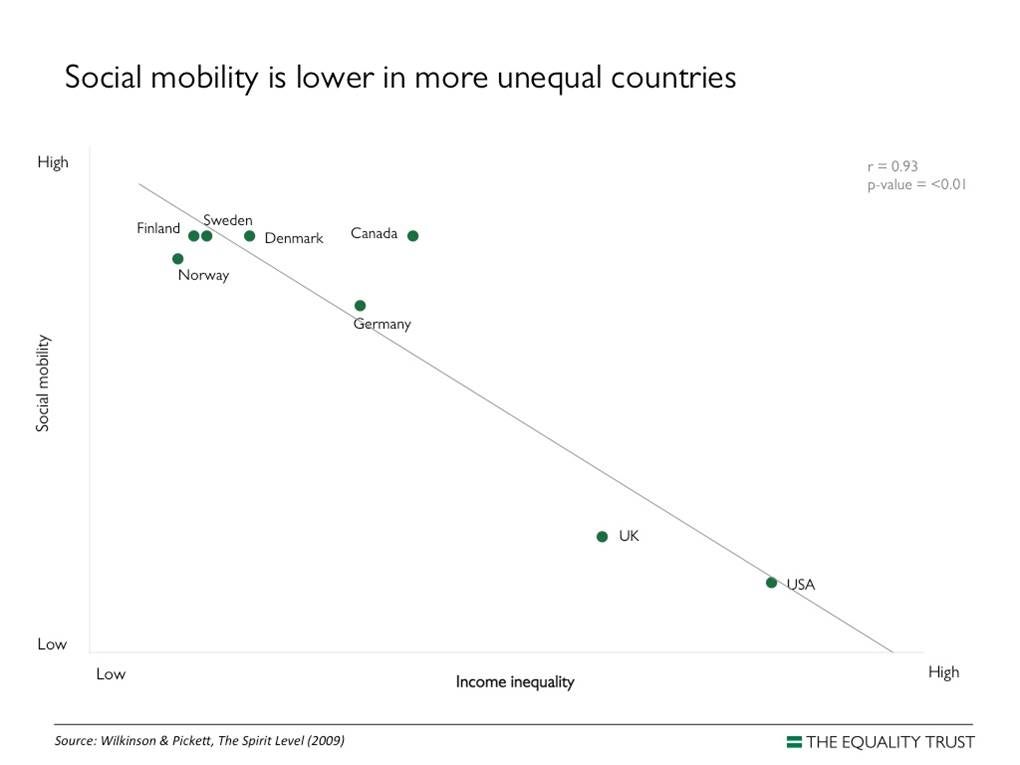 Confronted by this unavoidable truth, Boris offered nothing resembling a solution. In his recent report on the subject for the coalition, Alan Milburn wisely noted that “deep-rooted inequality and flatlining mobility have been decades in the making” and that “in most developed countries there has been a declining share of economic growth going to labour (and a higher share to capital) at the same time as there has been growing wage inequality. In the UK, the share of national income going to wages of workers in the bottom half of the earnings distribution decreased by a quarter between 1979 and 2009.”

But Boris had nothing say to about repairing the broken link between growth and earnings. Instead, he called for the return of academic selection under the guise of “academic competition” (perpetuating the myth of grammar schools as engines of social mobility) and sought to reassure us that those benefiting most from inequality were already paying their fair share. He told his audience: “Today, when taxes have been cut substantially, the top one per cent contributes almost 30 per cent of income tax [one might note that he is among them]; and indeed the top 0.1 per cent – just 29,000 people – contribute fully 14 per cent of all taxation.”

Yet this statistic tells us less about what has happened to the tax system than it does about what has happened to the income system. Over the period in question, the earnings of the rich have soared to hitherto unimaginable levels. As a recent OECD study showed, the share of income taken by the top 1% of UK earners increased from 7.1% in 1970 to 14.3% in 2005, while the top 0.1% took 5%. Quite simply, the rich are paying more because they’re earning more. Is this really cause for us to “fete them and decorate them and inaugurate a new class of tax hero”? If 11 million low and middle earners receive the pay rise they have been denied since 2003, they’ll pay more tax too. In fact, compared to the rich, they’re already paying the lion’s share. As the ONS recently found, owing to VAT and other regressive levies, the least well-off households pay 36.6% of their income in tax, while the wealthiest pay 35.5%. Had the coalition taken Boris’s advice and cut the top rate of income tax to 40p (with a 30p rate down the line) , that gap would be even wider.

A more progressive tax system would narrow the gap between rich and poor and tilt the odds in favour of social mobility but here, as elsewhere, the policies promoted by Boris aren’t the solution to a society in which birth determines destiny, they’re the cause of it.