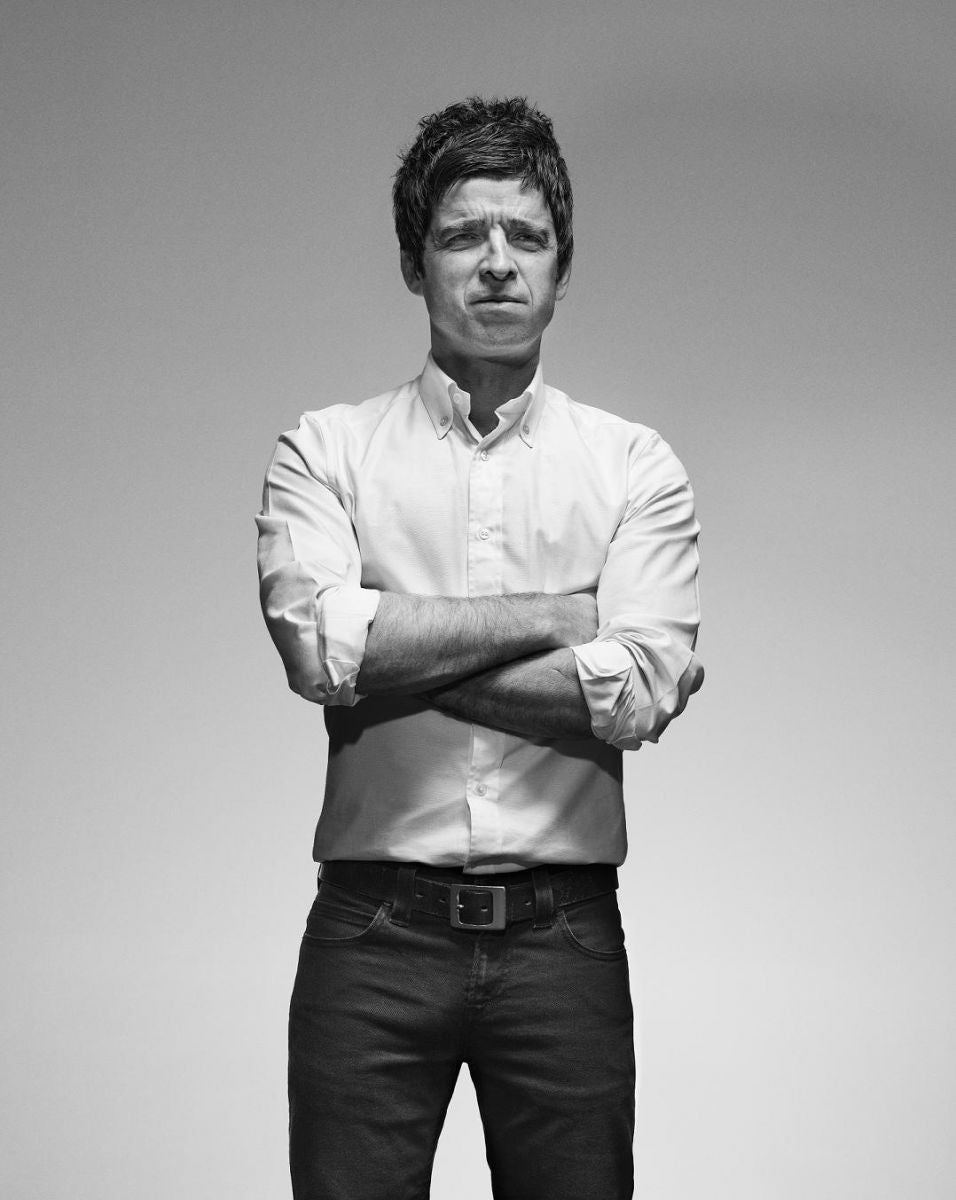 Gallagher: “Ed Balls can frankly lick mine on his way to and from obscurity”
Portrait by Alan Clarke

Do you regret endorsing Tony Blair or New Labour?

Nah, not really. It was a great time in history. The grip of Thatcherism was being smashed. New Labour had been brilliant in opposition. When Tony Blair spoke, his words seemed to speak to people, young people. Call me naive but I felt something – I’m not quite sure what it was, but I felt it all the same. I do regret that picture at No 10 that night, though . . . I can still smell the cheese!

Would you go for tea with David Cameron?

Maybe. He looks like he could do with a good strong cup of Yorkshire. I don’t mind him, to be honest. No one actually takes him seriously, do they? All that “call me Dave” gear – hilarious.

Which politicians do you admire/despise?

Not many. What’s to admire, anyway – the way they fiddle their expenses? If I have to, though, I’d say: Winston Churchill, for his name alone. Dennis Skinner, because he absolutely takes no shit off the toffs, and Tony Blair because he played guitar and smoked a bit of weed (allegedly!). Somewhat predictably, the despise list is a bit longer. I won’t go into it here, I haven’t got all day, but in the interests of fairness and balance I’ll say . . . off the top of my head: Diane Abbott, [Ken] Clarke, Portillo, Boris-f***ing-Johnson, that little ginger bitch that ceremoniously gave back the money she’d fiddled during the expenses scandal, Norman Tebbit! Peter Mandelson! George-f***ing-Osborne. If I don’t stop now, this could literally go on longer than Be Here Now.

Who would you vote for if there were an election tomorrow?

I’m not sure I would vote. I didn’t feel last time that there was anything left to vote for. Doesn’t seem that anything has changed, ergo . . . ?

Do you think you pay your fair amount of tax as a rich person?

No. I think we should return to the Sixties when we paid 80 per cent tax so government can piss it up the wall on the war machine and bailing out the banks and funding ludicrous “initiatives” to help “stimulate” the economy. The economy that successive governments oversaw the destruction of. I think I pay just about enough, thanks . . . and you?

Do you believe in God?

Sadly no. And I don’t believe in the devil either. Or ghosts. Or Father Christmas, for that matter.

How do you feel when you see politicians at public events?

Public events I don’t have a problem with. Although when you see them backstage at Glastonbury you are thinking: “Really, just f*** off.” I’m amazed “Dave” hasn’t popped down for the weekend to get down with the middle classes. When I see them at (for want of a better term) showbiz events, that really winds me up. We were at the GQ Awards recently and the gaff was crawling with them; they were even giving speeches and getting awards. Boris-f***ing-Johnson got an award for “Politician of the Year”. I was speechless an award like that even exists, and he was boasting – in a Nineties rock-star full-of-cheng style – at how brilliant he must be due to the fact that he’d won the same award three times. Will.i.(haven’t got a f***ing clue) Hague was there while that crisis in Syria was blowing up.

I genuinely thought these people would have more important things to be getting on with. Clearly, scratching the back of said magazine and its editor takes precedence over all. Shameful behaviour. Though not as shameful as ours, eh, Rusty?

Did you trust politicians in the Seventies and Eighties more than contemporary figures such as Osborne or Ed Balls?

You could trust them in the sense that you knew exactly where you stood with them. Neil Kinnock, for example: no grey areas. He knew who he was and what he stood for. Thatcher, even. We knew she was the enemy. She hated us; we hated her. All was right in the world.

This new generation are media opportunists, shilly-shallying flag-wavers, the musical equivalent of Enya. If they were a colour, they’d be beige.

I have no doubt that George Osborne would’ve practised his weeping the night before Thatcher’s funeral. He might be the most slappable man in England, the kind of man that would watch Coronation Street or EastEnders to get a perspective on the working class.

Ed Balls can quite frankly lick mine on his way to and from obscurity.

Whom will you tell your sons to vote for?

Politics will surely be dead as a f***ing parrot by the time the two young lords get the vote.

Not really. Musicians would have you believe otherwise, of course. On the other hand, music can and does shape society – and society in the long run eventually shapes politics. But if you’re suggesting that “Dave” hears the new Fatboy Slim tune “Eat Sleep Rave Repeat” and suddenly advocates 24-hour clubbing, then you’re mental.

Are the working class represented in modern politics?

I don’t think so, and that wouldn’t be by accident either. The de-education of the masses has seen to that. Sad but true.

Do you suffer from working-class guilt?

Working-class guilt – if such a thing exists – exists only in the offices of the Guardian. Only in the mind of the Guardian journalist who feels he’s let his right-on parents down by not writing for Socialist Worker.

Working-class guilt is for the middle-class Observer columnist what wishes he wasn’t such a joyless square; who feels bad that his favourite bottle of rosé costs more than £9.99. The rest of us, on the other hand, are too busy living to give a shit.

Do you ever vote?

Not if I can help it.

How could we re-engage people who feel that politics “isn’t for them”?

Good luck with that! Politics itself isn’t that bad. It would seem it’s central to our very being – y’know, being British and democratic and all that. The trouble with politics, like most things in the world, is the people that are in it. Politicians. How can people relate to politics if they can’t relate to politicians?

Should we regulate or legalise drug use?

Not sure that would be the best idea. Decriminalise the use of psychedelics? Maybe yes. But heroin – the fleetwood [Editor: as in Mac/smack]? Cocaine? Nah, not for me. To open the door to every tourist drug monkey in Europe would be a nightmare. There’s enough tourists here anyway! Have you been to Amsterdam?

People will always find a way to soldier on. Even at its worst there’s enough to be proud of in this country: music, football, the arts and fashion. These things come and go in cycles. I mean who could’ve foreseen during the darkness of the Eighties how incredible the Nineties would be?

Hang in there, I say. The magic is coming. And when it does come, next time do yourself a favour: get involved, enjoy it. It never lasts that long.