The current wave of repression in Bahrain is an embarrassment for David Cameron and the British government, with the Gulf state yesterday heading off the threat of pro-democracy demonstrations by deploying razor wire to prevent public assembly and attacking demonstrators with birdshot and teargas. Only last week, in the middle of the regime’s brutal pre-emptive crackdown on the opposition ahead of the planned protests, Cameron met King Hamad at Downing Street apparently to discuss deepening the strategic relationship between Bahrain and the UK. Indeed, it seems as though the more desperate the situation in Bahrain becomes, the closer Britain ties itself to its ruling family.

To recap: in Spring 2011 a huge, broad based and overwhelmingly peaceful pro-democracy movement was violently crushed by regime security services backed-up by a Saudi-led intervention force. The regime subsequently promised reform (largely to save the blushes of its Western allies) but delivered next to nothing, save for a ‘National Dialogue’ that British ministers were quick to praise, but which proved something of a joke given that leading opposition members are currently in jail for having the wrong opinions.

Last month, a call went out for large, non-sectarian anti-regime protests to coincide with yesterday’s anniversary of independence from the UK (an occasion which, tellingly, the royal family does not celebrate). The response was a series of measures effectively returning the country to a state of martial law, with all public political demonstrations banned in the capital, and any parent whose child participated in such activity being liable to a year in jail for a second “offence”. Activists have been subjected to a wave of arrests and torture, according to reports received by Amnesty International. The pretext is anti-terrorism, but as Amnesty notes, the definition of terrorism used by the regime is “overly broad and ambiguous”. According to Emile Nakhleh – academic, former US intelligence officer, and author of Bahrain: Political Development in a Modernizing Society – the regime regards as a terrorist not only the few engaged in armed actions, but “any Bahraini who is suspected of being a dissident or actively advocating genuine reforms”. The regime’s own brand of state terrorism, by contrast, continues with impunity. 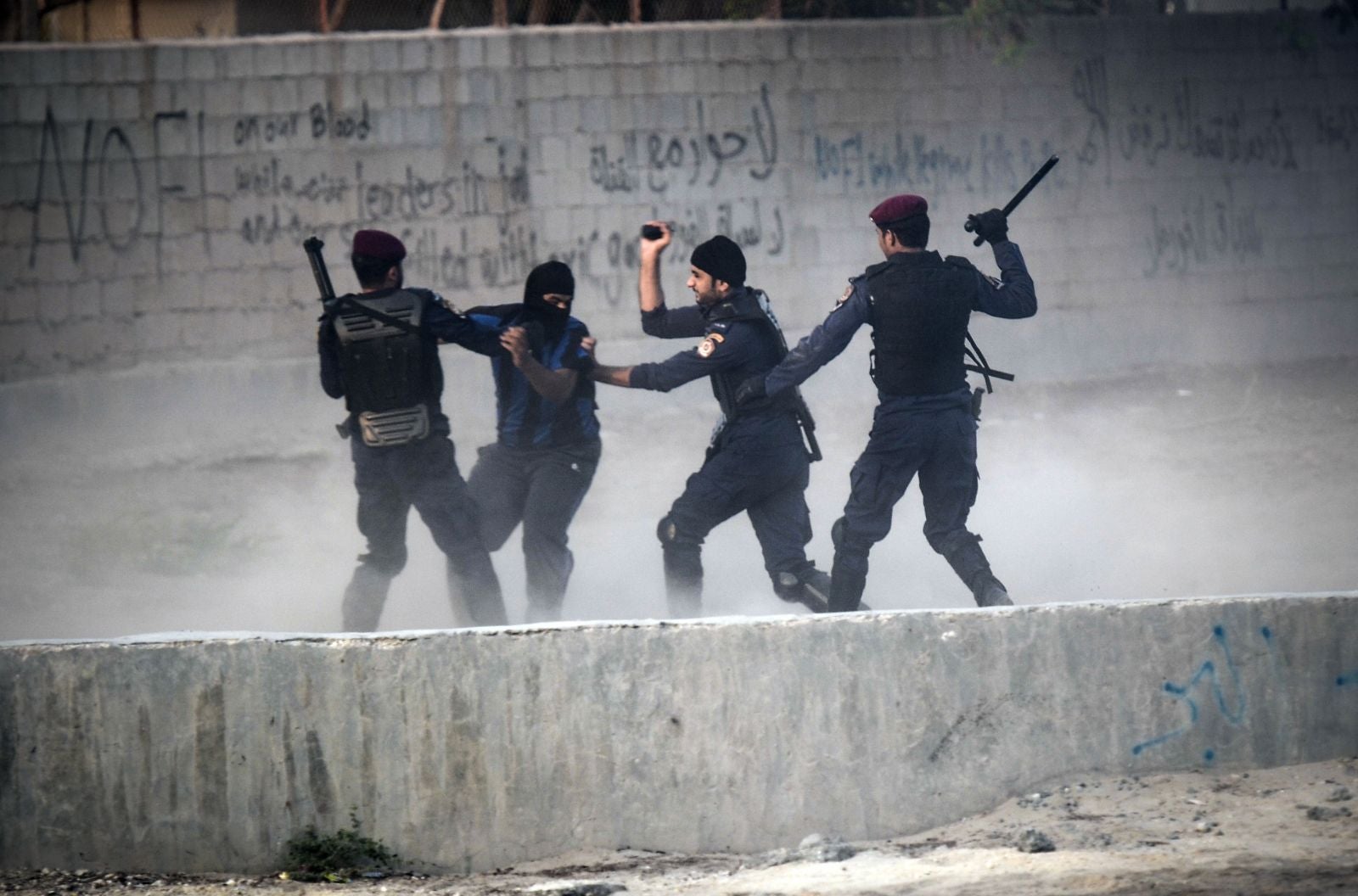 King Hamad’s emergency decrees – described by Amnesty as “a shameful attempt to completely ban any form of dissent and freedom of expression” – were issued just hours after he met with David Cameron, apparently to discuss a sort of renewal of vows between the two states. In the early days of the uprising Britain had suspended certain arms export licences to Bahrain, but relations reverted fairly swiftly to business as usual, with a defence agreement (reportedly including provision for assistance in securing “internal stability”) quietly signed in October of last year.

More seriously, an April 2013 research paper from the Royal United Services Institute speculated that Britain was gearing up for a return to the positions “East of Suez” that it abandoned in 1971 when Bahrain and the other Gulf states gained their independence. One of the main agenda items discussed at Cameron’s meeting with Hamad was a £1bn Typhoon fighter jet sale; part of a broader attempt to bolster the military forces of the Gulf Cooperation Council (GCC) states that assisted Bahrain in its spring 2011 crackdown. The Daily Telegraph’s defence correspondent Con Coughlin reported that this was potentially the prelude to a major recommitment by Britain to the security of the region’s monarchies, which could see “a permanent garrison of [British] troops and an RAF combat squadron stationed in the Gulf”. Such a strategic move would amount to a dramatic vote of confidence in some of the most anti-democratic regimes in the world, and a revealing British response to the Arab uprisings.

Putting aside the fairly obvious moral concerns, connivance with the Bahraini royals could prove deeply misguided even from the British state’s own point of view. Christopher Davidson, a leading academic expert on the Gulf, notes that of the six GCC regimes, “Bahrain’s has by far the bleakest future, with little hope that the ruling family can restore sufficient legitimacy to ever govern again without resorting to martial law and extensive repression”. For Davidson, the current strategies employed by the Gulf states to prevent either revolution or substantive reform are unsustainable in the medium term, with change inevitable whether it is desired or not. Another academic commentator, Gilbert Achcar, notes in his recent book, The People Want, that the Arab uprisings are the product of deep political and economic contradictions that will continue to produce social upheaval until they are resolved, however long that process takes. If these analyses are correct, then neither Bahrain’s tactic of crushing all dissent, nor Britain’s policy of supporting it come what may, can possibly qualify as a serious strategic response. When the dam finally bursts, London will quickly find itself on the wrong side of history, with few friends left in the Gulf region and a lot of explaining to do at home.

David Wearing is researching a PhD on British relations with the Gulf states at the School of Oriental and African Studies. Find him on Twitter as @davidwearing