I was lucky enough to get a ringside seat for this, so I thought it deserved to be shared with a wider audience.

The BBC’s Sunday Politics – on which I appear as part of the political panel – invited Alex Jones on to discuss whether the Bilderberg meeting of politicians and business leaders really was as sinister as it’s been painted. Opposite him was David Aaronovitch, author of the enjoyable book Voodoo Histories, which dismantles some of the last century’s most persistent conspiracy theories.

The video is worth watching for a) David Aaronovitch’s mild question that if Alex Jones knows all this top secret truth, and is still alive, does that mean that it’s all bollocks or is Jones part of the conspiracy? and b) Andrew Neil’s closing “we’ve got an idiot on the show!”.

Jones didn’t quite tell us “sheeple” to wake up, but he did suggest that the Euro was a Nazi plot, and that the current lobbying scandals were a distraction from the real problem (ie Bilderberg). If you’re tempted to dismiss Jones as a fringe crank, it’s sobering to remember that he claims more than two million listeners for his radio show, and more than 250 million views for his YouTube videos.

While in the studio, Jones also filmed the day’s political guest, Ed Balls, on his phone, and has since promised that the footage will appear on his website. He also filmed Aaronovitch taking off his powder while saying something about fluoride that I didn’t catch.

This was Andrew Neil’s on-air reaction: 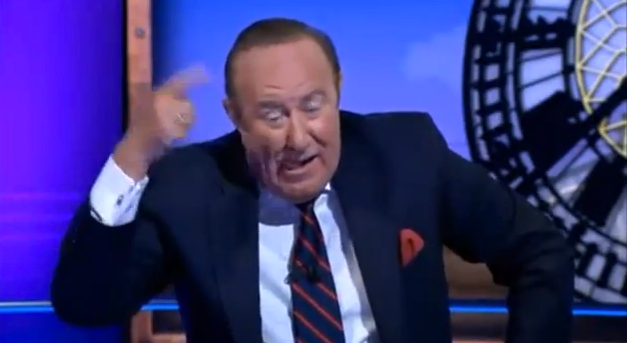 It was certainly great telly, even if I don’t think we learned anything about Bilderberg. And if all this is beneath you, may I suggest you read my colleague George’s excellent dissection of the interview with Ed Balls, which also featured on the show.