It has long been known that Eliza Kewark lived in western India but she is usually described as Armenian. However, analysis of DNA passed down the female line confirms that she was at least half-Indian…

Jim Wilson, a genetics expert at the University of Edinburgh and BritainsDNA, who carried out the tests, said that Eliza’s descendants had an incredibly rare type of mitochondrial DNA (mtDNA), inherited only from a mother. It has so far been recorded in only 14 other people, 13 Indian and one Nepalese. This DNA will have been inherited by the Duke and Prince Harry but will not be passed on to their children, although it is likely that their descendants will have some of Eliza’s Asian genetic material. 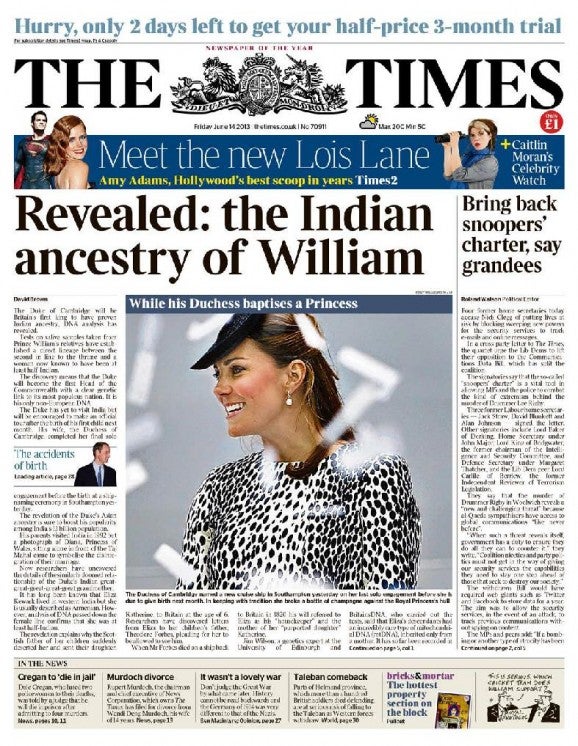 The splash is actually vaguely mis-sold. Although Eliza Kewark was indeed thought of as Armenian, it’s not particularly surprising that she would have had Indian ancestors; the Armenian diaspora had been in India for centuries at the time of her birth, and even the most insular communities tend to experience genetic mixing over in that timescale.

Instead, it’s interesting that a specific type of mitochondrial DNA, only found in Asian people, has passed all the way down through the maternal line to Harry and William. In a far more concrete way than normal, we can say that they have “Indian DNA”; though in practical terms that is largely meaningless.

But there are two troubling sides to the splash.

The first is the Times‘ motivation in running it. In the middle of the double page spread which carries the story, readers are exhorted to “Discover your ancient history”. The boxout is an advert for BritainsDNA, the source of the story, promoting the company’s “cutting-edge technology” which can “help to answer a fundamental question—where do you come from?” Times+ members – people who subscribe to the paper or its website – are offered a free upgrade package if they order a DNA test.

Did the Times decide to run the story on the front page, and then negotiate a deal for their readers? Or were they offered the story on the condition that they ran a readership offer? The firewall between editorial and advertising is typically stronger than this, and when it breaks down, bad judgement can follow.

But that is a one-off concern. There is a wider issue at stake here, which is that the story reveals information about the genetic make-up of someone who has not consented to any DNA tests. Thanks to the fact that mtDNA is exclusively inherited along the maternal line, the company could test two other people with the same maternal heritage as William and Harry, and then run the story on them instead.

Thankfully, this story is relatively trivial. But it feels like spying nonetheless. There’s an obvious reason why the Times didn’t run the story with Robin Dewhurst and Sarah Drury, the two distant cousins of the princes who provided the actual DNA, on the front page. But our DNA is the most basic data we have. No-one should have to find out what it contains by looking at the front-page of a newspaper.