Harriet Harman put in a more than credible performance at yesterday’s PMQs, and Labour’s deputy leader is back in the spotlight again today, challenging the main broadcasters over the disappearance of women presenters from our screens after they turn 50.

Harman wrote to the BBC, ITV, ITN, Channel 4, Channel 5 and Sky News in February requesting figures on the number of women employed on and off-screen and the statistics have now been published for the first time. Here are some of the most striking: 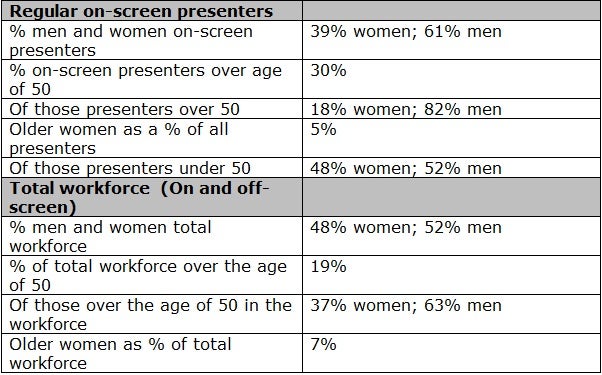 Of the broadcasters, ITV performed the best, with 55 per cent of their presenters women aged over 50, followed by the BBC with 20 per cent and Sky News with 9 per cent. ITN and Channel 5 have no women presenters aged over 50.

Harman said: “The figures provided by broadcasters show clearly that once female presenters hit 50, their days on-screen are numbered.

“There is a combination of ageism and sexism that hits women on TV that doesn’t apply to men in the same way.

“It is an encouraging first step that broadcasters have been open in providing these statistics. Their response shows that they all recognise that this is an important issue that needs to be addressed.

“I will be publishing these figures annually so we are able to monitor progress.”

Harman has long been admired by the left and loathed by the right for her tenacious campaigning, most notably over equal pay for women and the Equality Act. Let’s hope she’s as successful on this front.