Last week, the Conservatives were rebuked by the chair of the UK Statistics Authority, Andrew Dilnot, for falsely claiming to have increased real-terms spending on the NHS “in each of the last two years”. In response to a complaint from the shadow health secretary, Andy Burnham, Dilnot stated that, contrary to recent Conservative statements, “expenditure on the NHS in real terms was lower in 2011-12 than it was in 2009-10”. The most recent Treasury figures show that while real-terms spending rose by 0.09 per cent between 2010-11 and 2011-12, it fell by 0.84 per cent between 2009-10 and 2010-11. A significant cut followed by a paltry increase means that spending in 2011-12 (£104.3bn) was lower in real-terms (and in cash-terms) than in 2009-10 (£105.1bn).

Nonetheless, at PMQs the following day, David Cameron refused to concede that there had been any inaccuracy. “It is a very simple point. The spending figures for 2010 were set by the last Labour government. Those are the figures we inherited. All the right hon. Gentleman [Ed Miliband] is doing is proving that his government were planning for an NHS cut,” he said.

But while Cameron publicly insists that nothing has changed, the Tories have quietly updated their website to reflect Dilnot’s letter. Having previously claimed to have “increased the NHS budget in real terms in each of the last two years”, the health section of the site now states, “we have increased NHS spending in real terms since 2010-11 and will continue doing so.”

Keir Starmer: If you don’t change your views you won’t succeed 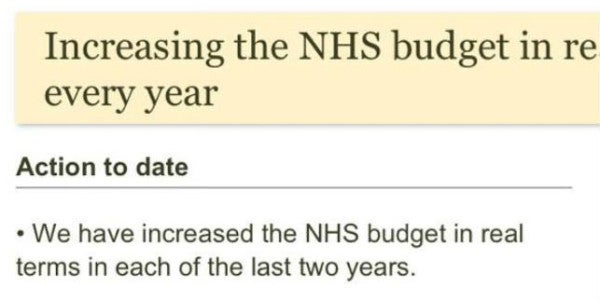 Burnham is set to ask the Speaker to bring Jeremy Hunt to the Commons on Wednesday to correct the record in person.