The BBC’s flagship late-night current affairs show, Newsnight, is facing an uncertain future after a second scandal related to investigations of sexual abuse.

The Friday night edition of the programme carried an on-air apology for an investigation on 2 November which wrongly hinted that Tory peer Lord McAlpine was involved in a paedophile ring at the Bryn Estyn care home. Although McAlpine was not named on the show, the report stoked speculation on social media sites over his identity. He has since denied the allegations, and abuse victim Steve Messham has said that he wrongly identified him.

In a statement released yesterday, the BBC said:

1. A senior news executive has been sent in to supervise tonight’s edition of Newsnight

2. An apology will be carried in full on Newsnight tonight

3. Ken MacQuarrie, Director BBC Scotland, will write an urgent report for the DG covering what happened on this Newsnight investigation

4. There will be an immediate pause in all Newsnight investigations to assess editorial robustness and supervision

5. There will be an immediate suspension of all co-productions with the Bureau of Investigative Journalism across the BBC

The future of Newsnight is now being openly discussed, with its own presenter, Eddie Mair, asking a guest “Is Newsnight toast?” and concluding the programme by asking: “That’s all we have for tonight. Newsnight will be back on Monday. Probably.” 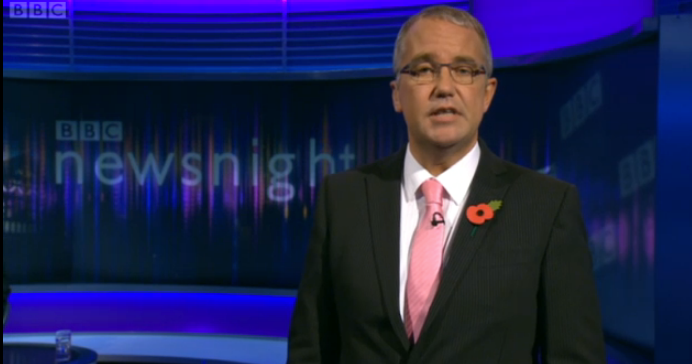 Yesterday’s edition carried no editor’s name on the credits – Peter Rippon having previously stepped aside over an “inaccurate” blog explaining why he decided not to run an expose of sexual abuse perpetrated by Jimmy Savile.

The fact that this is a second error relating to reports on historic child abuse is a catastrophe for Newsnight – particularly as the BBC’s director-general, George Entwistle, used to work there. He was yesterday touring the studios (although only the BBC ones, rival outlets noted) to explain what happens next.

He said that shutting the programme down – as Rupert Murdoch did to the News of the World when the scandals there became too toxic – was a “disproportionate” response, although he acknowledged the BBC was suffering a “crisis of trust”.

He told John Humphreys on Radio 4’s Today programme that he expected Newsnight staff to be asked questions:

Did the journalists carry out basic checks? Did they show Mr Messham the picture? Did they put allegations to the individual? Did they think of putting allegations to the individual? If they did not why not? And did they have any corroboration of any kind? These are the things we need to understand because this film as I say had the legal referral, was referred up through the chain yet it went ahead. There’s some complexity here I absolutely need to get to the bottom of.