With an ever-greater number of Tory MPs demanding a referendum on EU withdrawal, it’s worth recalling that one of the three main parties has already promised one – the Lib Dems. The party’s 2010 election manifesto stated:

The European Union has evolved significantly since the last public vote on membership over thirty years ago. Liberal Democrats therefore remain committed to an in / out referendum the next time a British government signs up for fundamental change in the relationship between the UK and the EU.

As the leaflet below shows, the Lib Dems also campaigned on the issue. 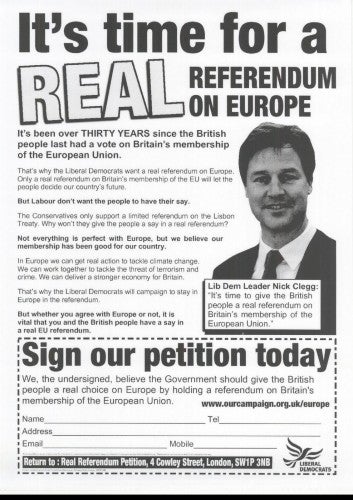 In his speech on Europe yesterday, Clegg denounced the belief that Britain could repatriate powers from the EU as “wishful thinking”, adding that “as soon as we start talking about repatriation, we descend into the in-versus-out debate”. It is precisely for this reason that the Lib Dems argued for a referendum on withdrawal at the last election. More recently, however, the party has made no mention of the pledge, taking the view that, with the eurozone in crisis, now would be “the wrong time” for a vote.

With Cameron shortly expected to outline plans to hold a referendum after the next election on a “new EU settlement” for Britain, it remains to be seen how Clegg responds. Tory MPs, if not his own party, are unlikely to let him forget his recent support for a vote on membership.