Headline unemployment numbers have been falling in recent months, giving the coalition cause for cautious cheer. Tory MPs are still wary of formally declaring the economy redeemed from disaster but they have at least some evidence to suggest it is on the right track.

The Labour rebuttal is that the pace of job creation is slowing and that long-term unemployment remains stubbornly high. (This is a tricky area for the opposition, which is always in danger of looking disappointed by good news and, in the quest for political vindication, celebrating misery.)

A big policy question in this area is the performance of the Work Programme, the government’s vast welfare-to-work scheme that pays private and voluntary sector organisations to place people in work. The scheme has been advertised by ministers as a miracle cure to the problem of long-term joblessness and an antidote to Labour’s failure to tackle the issue. Those who work with the Department for Work and Pensions as part of the Programme or in the welfare-to-work sector are less optimistic. They warn that the labour market conditions are not good enough to make the experiment work and that the cash premium for the “hard to place” benefit claimants – those deemed to face the highest barriers to finding work – are not high enough to make the ‘payment by results’ system work. (I wrote a longer analysis of problems with the Work Programme a few months ago here.)

It has been hard to judge the effectiveness of the policy because the DWP has prevented providers from publishing their data on how many people have actually been placed in work. We have had data on the number of people referred to the Work Programme which suggest that not enough of the long-term unemployed are even getting help through the scheme. What he haven’t seen – because ministers have continually delayed publication – is how many people have actually been found jobs and how many are staying in work long enough to trigger the payments on which the providers depend if they are not to go bust. In other words, we have yet to get a clear sense of whether the Work Programme is actually working.

That wait comes to an end tomorrow, when, at last, the DWP will publish the numbers. There are hints already that they won’t be encouraging. I have a copy of a letter (see scan below) from Employment Minister Mark Hoban notifying coalition MPs of the forthcoming data publication. He appears to hose down expectations, writing:

That sounds like a pre-emptive admission of failure. Job Outcome data are the proof that people are being placed in work and Sustainment Payment data are evidence of sustainable income for providers. So if “payment by results” is working those are the measures that matter and it is pretty disingenuous for a minister to suggest they aren’t the real story.

The simultaneous publication of “ad hoc statistics” relating to Labour’s Flexible New Deal (FND) – a primitive version of the Work Programme introduced by the last government – looks like a device to muddy the waters by trying to frame the success of the Work Programme in terms of its cost-effectiveness rather than its impact on long-term unemployment . The FND cost analysis has already been published by DWP here (pdf) so the only new element would be some spin of the numbers to show that coalition policy is doing something similar but cheaper. Even if that is the case it still doesn’t prove that the Work Programme is sustainable or doing what it was advertised to do.

A big data dump is also a classic technique to bury bad news. The letter concludes:

“The Work Programme is designed to be a major improvement to welfare to work support, my goal is to drive forward its effective implementation. I hope you will join me in supporting the programme on the day.”

It sounds as if expectations are being managed aggressively downward. Maybe I am wrong about this. Perhaps tomorrow’s numbers will show tremendous success in the placement of long-term unemployed people in jobs and a healthy cash flow to Work Programme providers proving that this flagship policy is running like a well-oiled machine. But the tone of Mark Hoban’s letter and the clear intention to camouflage the story suggest otherwise.

Update: Someone with a better knowledge of the Work Programme than me has pointed out another little bit of potential subterfuge. The letter refers to performance data from June 2011 to July 2012, whereas the DWP’s own standards for minimum performance are supposed to be measured according to results achieved in a calendar year – so the period that counts for judging whether the programme is working would be June 2011 – May 2012. Of course, if you count a year as 13 or 14 months you can squeeze in a few more job placements and claim the system is closer to meeting the required targets … 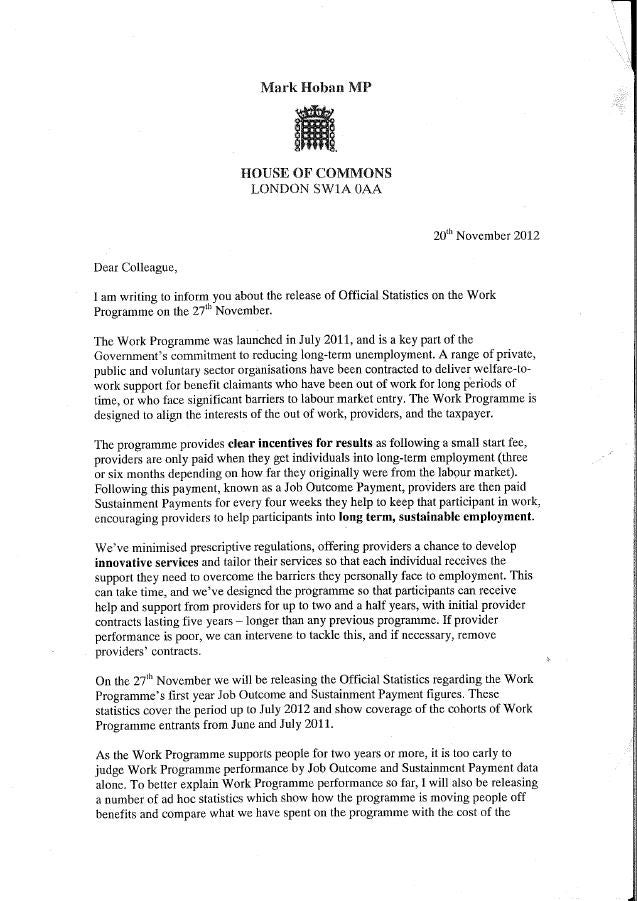 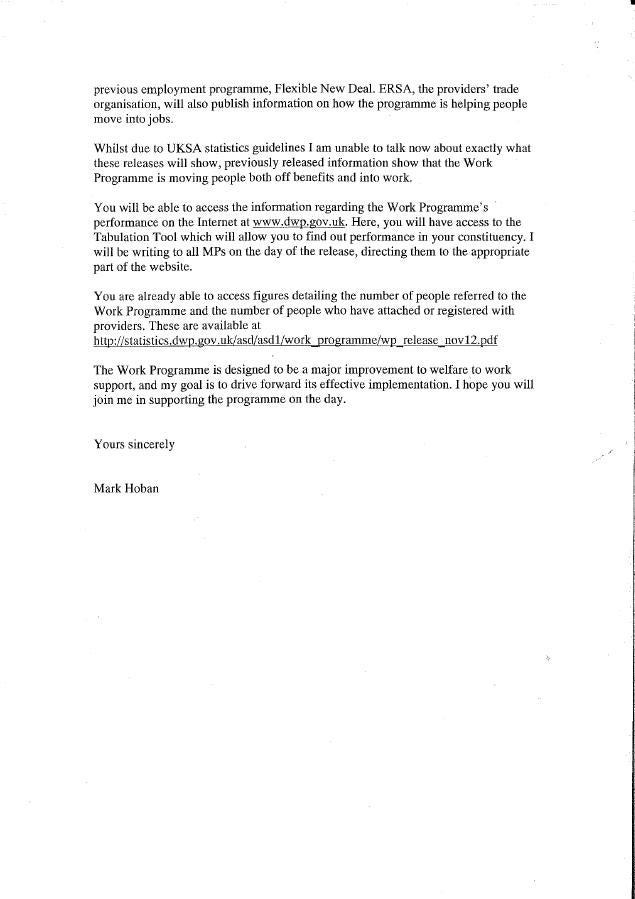