In last night’s presidential debate Romney responded to a question about equal pay with an annecdote about how he went about recruiting women to his cabinet. This is what he said he did:

“I went to a number of women’s groups and said, “Can you help us find folks,” and they brought us whole binders full of women.”

The transcript in full:

“An important topic, and one which I learned a great deal about, particularly as I was serving as governor of my state, because I had the chance to pull together a cabinet and all the applicants seemed to be men.

And I… and I went to my staff, and I said, “How come all the people for these jobs are… are all men.” They said, “Well, these are the people that have the qualifications.” And I said, “Well, gosh, can’t we… can’t we find some… some women that are also qualified?”

And.. and so we… we took a concerted effort to go out and find women who had backgrounds that could be qualified to become members of our cabinet.

I went to a number of women’s groups and said, “Can you help us find folks,” and they brought us whole binders full of women.”

Binders full of women. This is not how Ryan Gosling would do it: 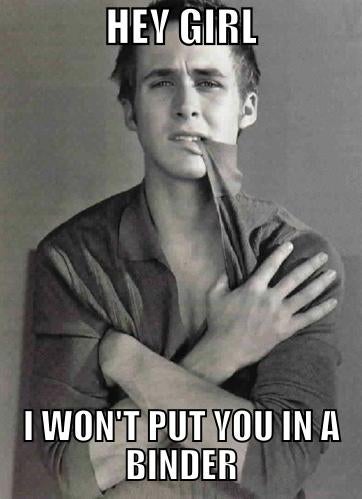 According to David Bernstein, it’s not what Romney did either. Binders were involved, but Romney wasn’t the one who requested them:

What actually happened was that in 2002 — prior to the election, not even knowing yet whether it would be a Republican or Democratic administration — a bipartisan group of women in Massachusetts formed MassGAP to address the problem of few women in senior leadership positions in state government. There were more than 40 organizations involved with the Massachusetts Women’s Political Caucus (also bipartisan) as the lead sponsor.

They did the research and put together the binder full of women qualified for all the different cabinet positions, agency heads, and authorities and commissions. They presented this binder to Governor Romney when he was elected.

Bernstein also points out that the percentage of senior-level appointed positions held by women ” actually declined throughout the Romney administration, from 30.0% prior to his taking office, to 29.7% in July 2004, to 27.6% near the end of his term in November 2006.”

But whether the annecdote is true or not, it’s interesting that Romney automatically hits upon “women’s groups” as the go-to place to find qualified women. Does he not know any himself?