Of course it was going to be surreal. Air raid sirens were supposed to sound at 11am, only a couple of hours before the German Chancellor arrived. Despite the fact the routine drill was cancelled the night before, the signs of a strange day were all there. Why is Angela Merkel visiting Greece now?

Merkel flew to Athens in search of momentum, leading up to German elections next September. Despite hope, or fear in some cases, that something important regarding the future of Greece and Europe as a whole was to be announced, nothing like that happened. “I am aware that the situation [in the society] is tough.” she stated during her meeting with President Carolos Papoulias. “I came here to support Greece”. But her general stance, doesn’t actually “support” this. If anything, an impression that Merkel visited the country looking for her “Thatcher moment”  is one of the things left unsaid. Since there are no laid off miners around, Greece would have to do.

Last time the German Chancellor visited Greece was in 2007, before the financial crisis blew up in our faces, back when the euro was still considered to be the greatest thing since sliced bread. Now the Greek economy is down the drain and European politicians are desperate to hang a “nothing to see here, move along” sign over the country. But everyone knows it is not so and can’t help but wonder: A simple meeting at the VIP lounge of the airport would do, why the theatrics that cost the Greek state almost two million euros? Why ban demonstrations from moving on all streets surrounding the parliament using a law drafted in 1971 by the Greek Junta? 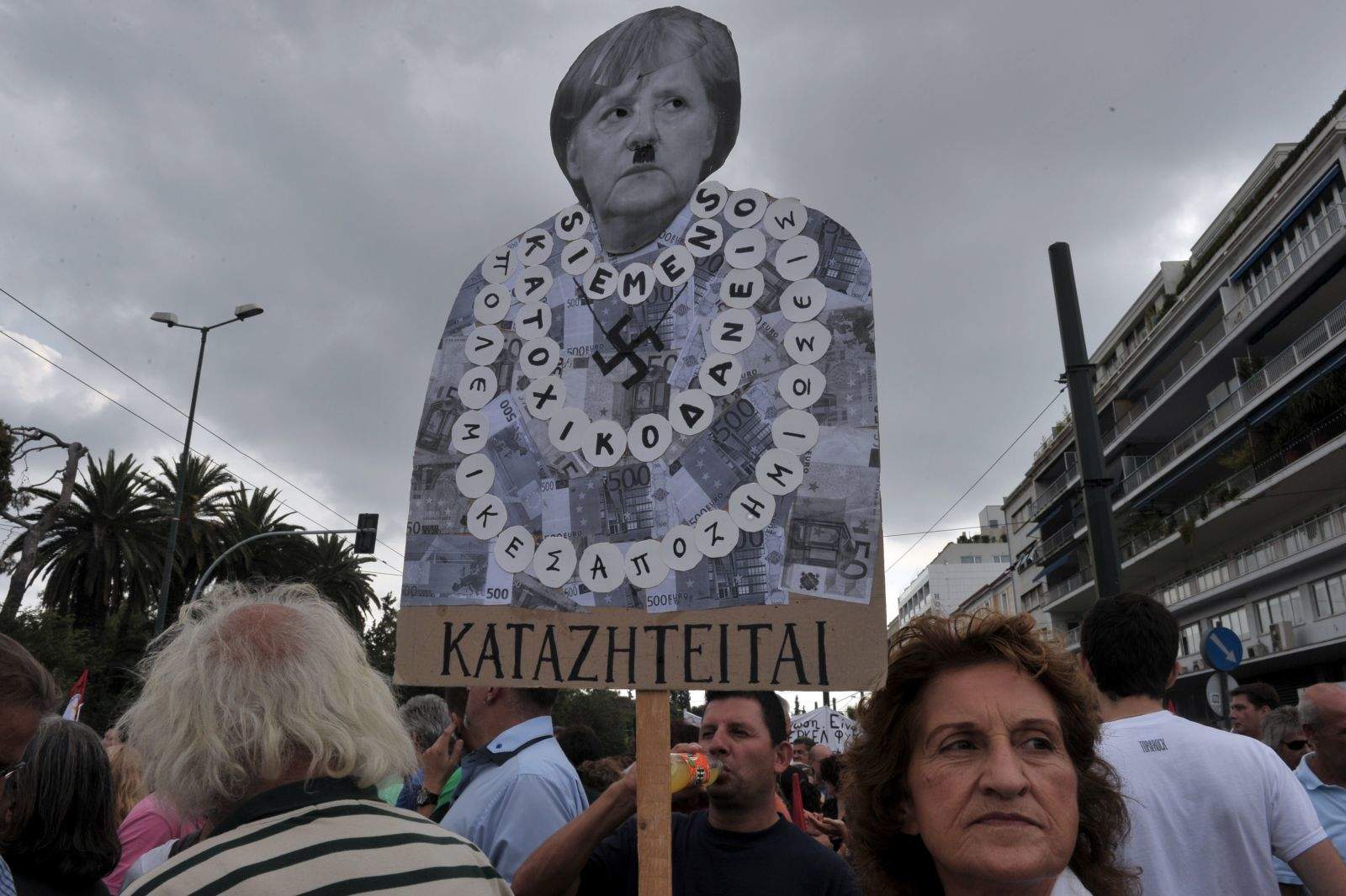 I arrived at the demonstration that took place despite the ludicrous ban outside the parliament, at around the same time Alexis Tsipras and Bernd Riexinger (of the German party Die Linke) did. Only a few thousand people on and around Syntagma square were present before I left my house, but by the time I got there, there was barely enough space to stand.

“We will give her the welcome she deserves” the leader of SYRIZA proclaimed.

Blocks of young people stood around the main SYRIZA one, while the usual chanting took place in front of the parliament. This was all before the time Merkel actually arrived. While making my way there, I tried to count how many policemen in riot gear I encountered getting there: I couldn’t. Every alley around syntagma was crawling with them. Minutes later I was notified that pre-emptive arrests were taking place all over Athens. Official sources, at the time, placed the number between 35 and 50. Unofficial info provided by veteran reporter Vassiliki Siouti of Eleftherotypia spoke of almost 2,000. 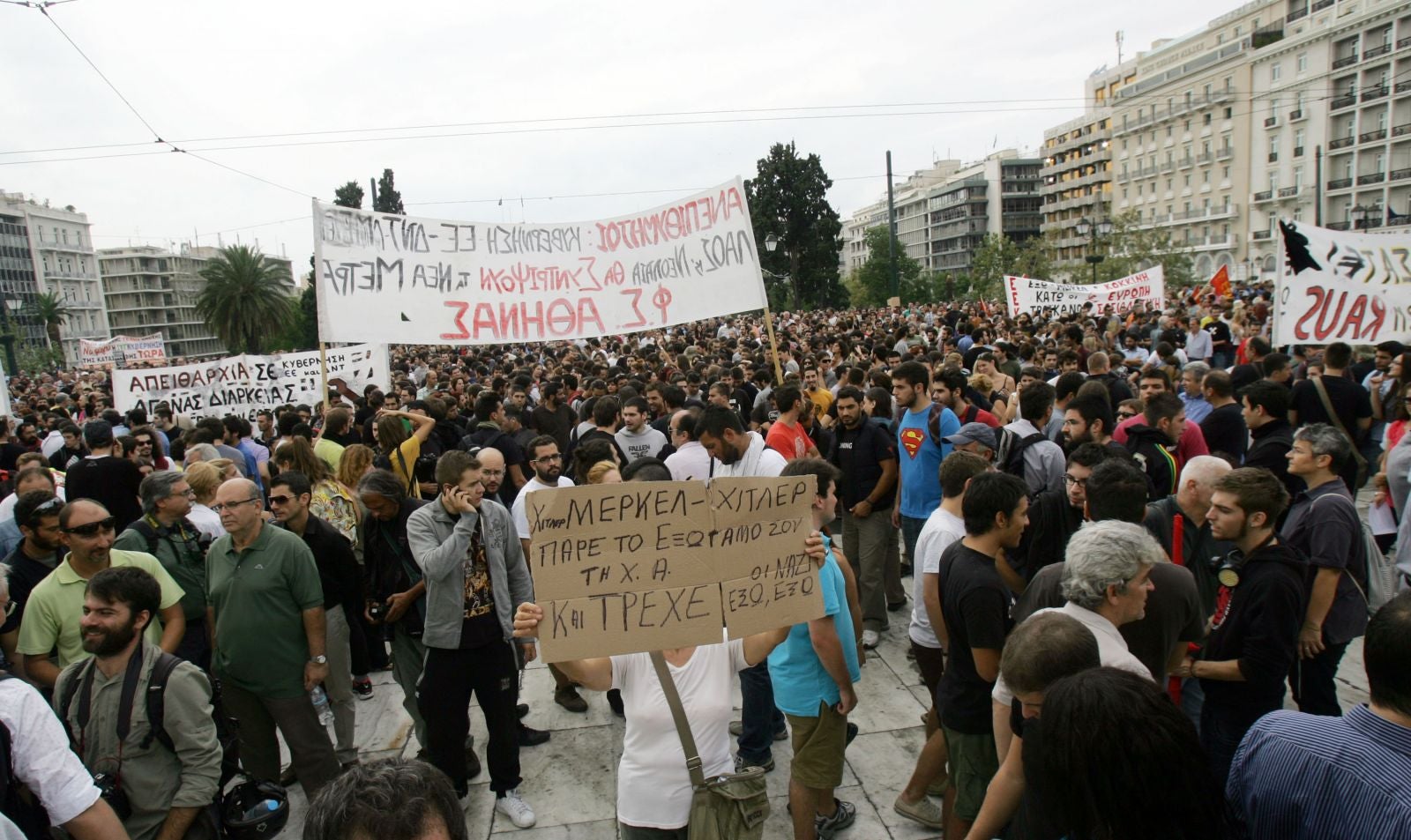 The trouble didn’t start before 3pm, when the first tear-gas canisters fell, next to the parliament, where the police had placed an iron fence to stop the demonstrators from reaching Vasilisis Sofias, the road from which Angela Merkel would reach A Samaras’ office. Pepper spray was used to hold back the demonstrators. The game often played between demonstrators and riot police began and stones were hurled at the police who tried to break the crowd and push them towards Panepistimiou street. Before the show was over a couple of hours later, 30 protesters were hurt, twelve people have been arrested and 193 detained. Right in front of me, as I was making my way through the backstreets of Syntagma, a hand-cuffed girl was used as a human shield by riot police against stones hurled at them by demonstrators. She was then dragged by her hair, probably towards the nearby Acropolis police station. This was not an isolated incident unfortunately, as many cases of police brutality against those detained were reported throughout the day.

In the meantime, news of the joint press conference were coming in via Twitter: Merkel reminded Greeks that she hopes Greece will be able to remain in the eurozone but has to stick to reforms. Specifically, she mentioned 89 reforms Greece must enact in the next few weeks (as well as €9bn in cuts), in order for the next €31.5bn tranche in loans to be released. With protestors chanting anti-austerity slogans, Merkel offered nothing. Instead, the ideological leader of austerity supporters in Europe stuck to her guns and spoke soft words of comfort to people who’ve just had enough of that. 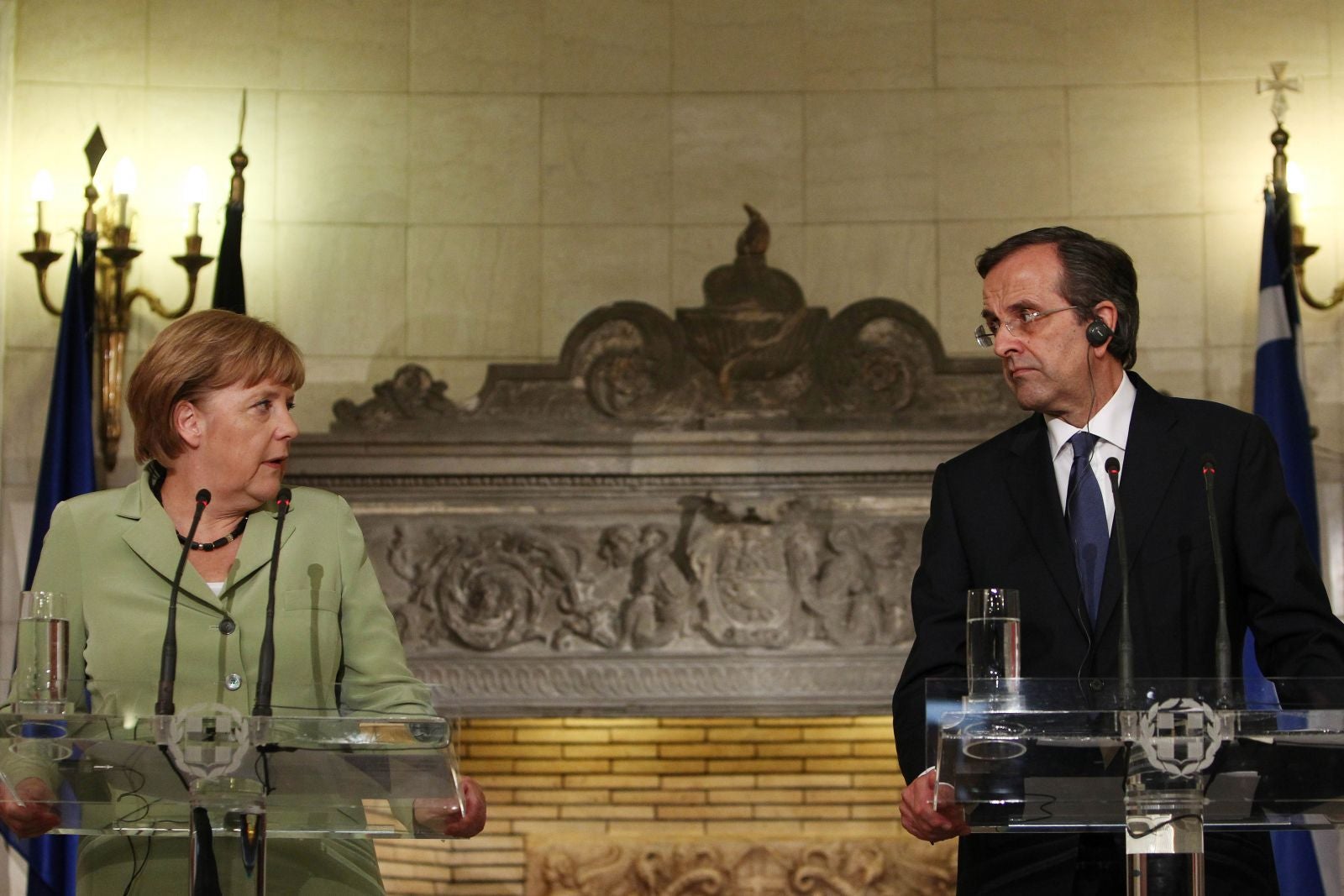 She tried to re-assure Greeks that reforms and cuts will pay off in the long-term, while helicopters patrolled the skies above 50,000 demonstrators burned Nazi flags and called for an end to the nightmare of recession. As Megan Greene of Roubini Global Economics, an expert on the eurozone crisis, put it: “At the end of the day, Merkel’s political gesture won’t plug the Greek government budget gap and won’t stop the economy from contracting further.” All Angela Merkel did was put on a political show to remind Greeks of their obligations, and win votes back home before departing for the Hilton hotel to meet with Greek and German businessmen and investors. 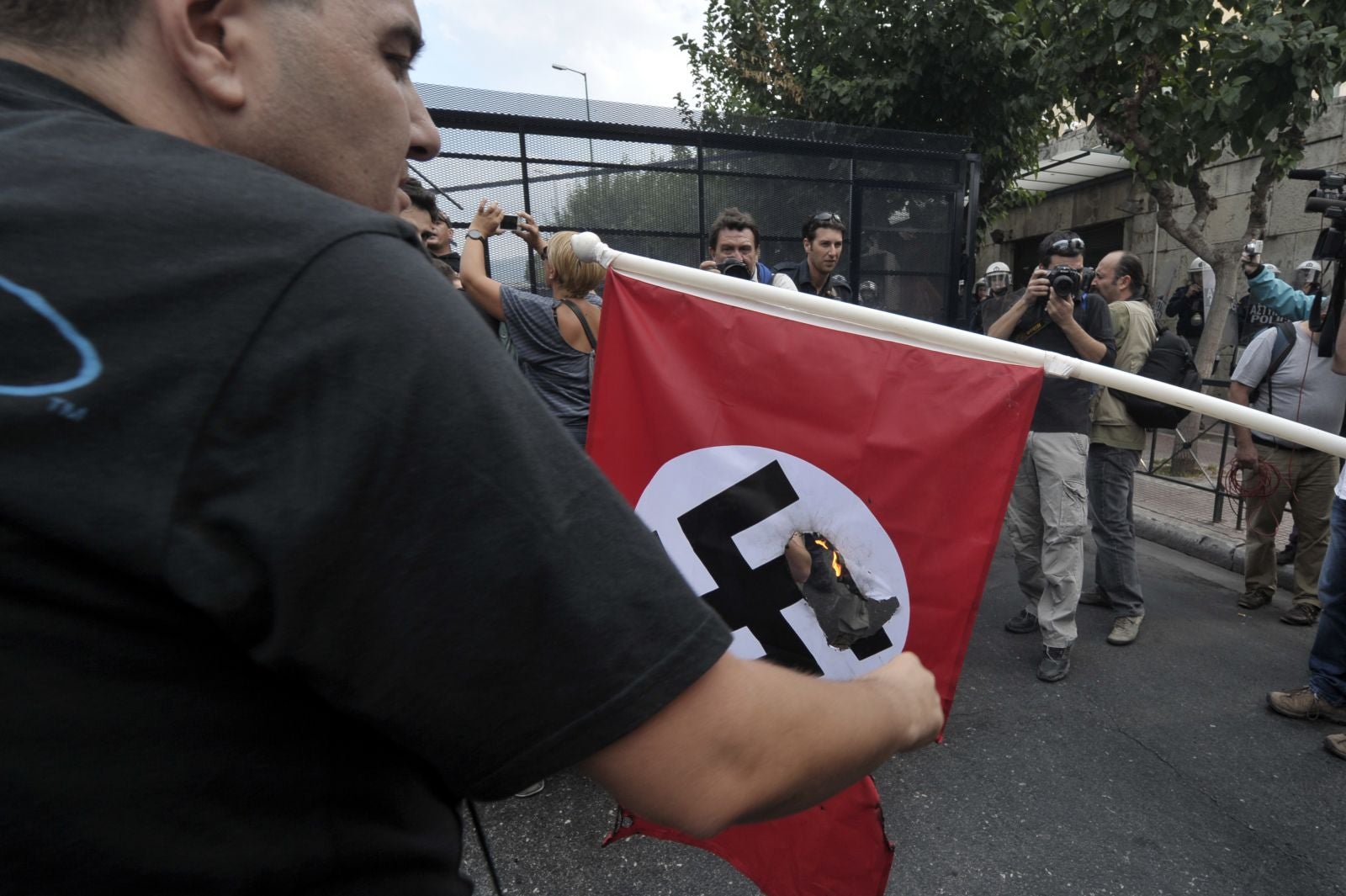 A protestor burns a Nazi flag

As I made my way back, hundreds of police officers were stationed outside the Acropolis tube station, right across the street from tourists filling the popular cafés in Makrygianni Street. A platoon was heading back towards the square, despite the fact demonstrators had scattered and Syntagma square was now occupied by police in riot gear. This, I realized, is the image of Austerity Europe. This is the image of governments who need to treat their populations like prisoners in order to stay in power. And this, is an image from the future: Leaders, hidden away from the public eye in Hilton hotel talking business with Greek and German investors, while people are sidelined, marginalized, stripped of rights and future, labelled as reactionaries who don’t know what’s good for them. 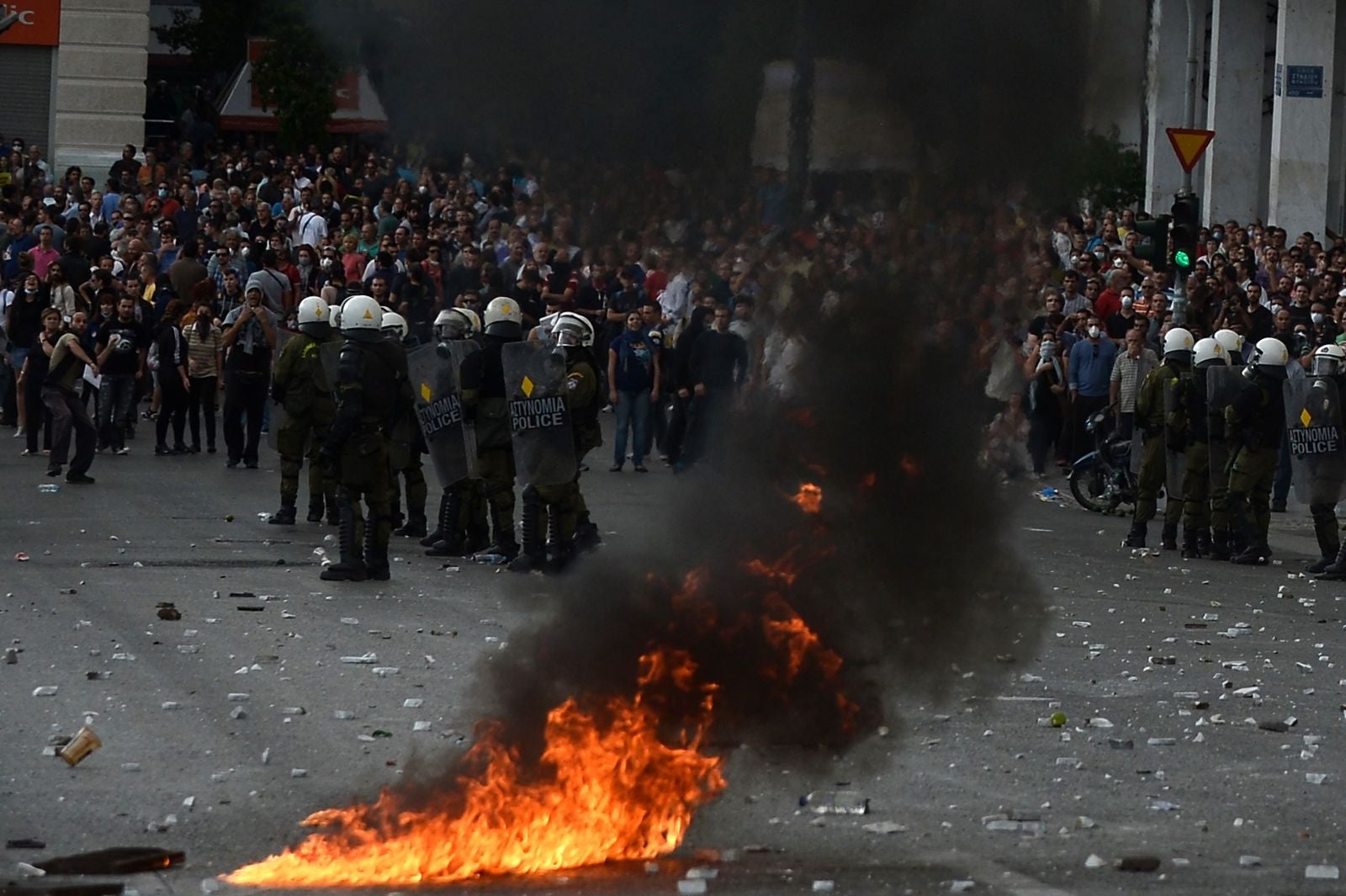 A fire burns as demonstrators clash with riot police

There’s still a heavy smell hovering over down-town Athens. Nostrils burn as they welcome the future. The bitter after-taste is but a warning of things to come.

Yiannis Baboulias is a freelance journalist. Find him on Twitter as @yiannisbab

All photographs from Getty Images

Angela Merkel last visited Greece in 2007, not the 1990s as previously stated. The article has been updated to reflect that.