The news has just broken that Andrew Mitchell has resigned as Chief Whip.

Number 10 announced on Twitter that David Cameron had accepted the resignation.

The Prime Minister has accepted the resignation of Chief Whip Andrew Mitchell.

Below is Mitchell’s resignation letter in which he admits that he swore at the police, but denies calling them “plebs”. 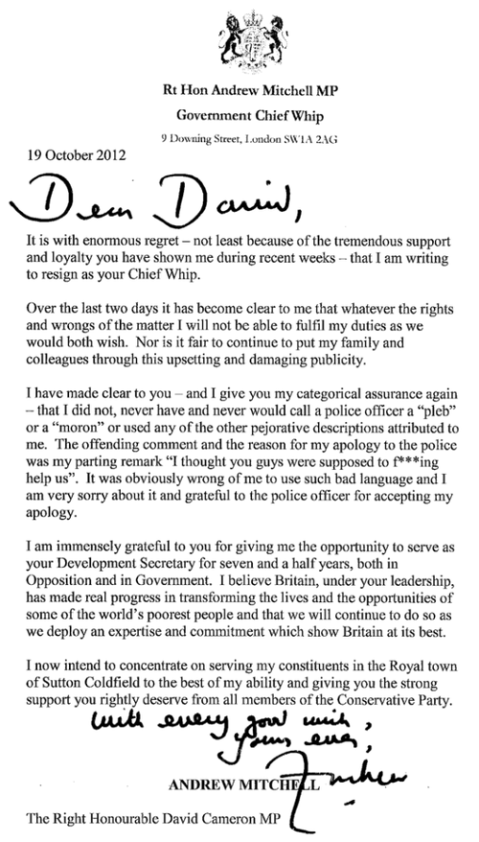 In his response to Mitchell, David Cameron said:

Thank you for your letter. I was sorry to receive it, but I understand why you have reached the conclusion you have, and why you have decided to resign from the Government.

I regret that this has become necessary, and am very grateful for all you have done, both in Government and in Opposition – as well as for the kind words in your letter.

As we discussed in advance of the reshuffle, I wanted you to bring your organisational skill and energy to the important job of chief whip. It was clear to me that you had already made a strong start.

As you have acknowledged, the incident in Downing Street was no acceptable and you were right to apologise for it.

You have much to be proud of from your service on the frontbench both in opposition and in government, and in your continued service to your constituents in Sutton Coldfield. I hope that, in time, you will be able to make a further contribution to public life.