When does “teaching the debate” become “creating the false impression of a debate”?

The National Trust has today come under fire for its decision to “reflect and respect” the view that science might not be real. At the Giant’s Causeway visitors’ centre in Northern Ireland, an interactive audio exhibition on the formation of the Causeway includes the creationist view that the earth was made by God a few thousand years ago – not billions of years ago, as geology and physics and biology and astronomy might suggest.

In a statement, the National Trust said:

This is an interactive audio exhibition in which visitors can hear some of the different debates from historical characters. In this exhibition we also acknowledge that for some people, this debate continues today and we reflect and respect the fact that creationists today have a different perspective on the age of the Earth from that of mainstream science.

In an update, the Trust said that the Creationist reference comprised only a small part of the exhibition. It added: “The National Trust fully supports the scientific explanation for the creation of the stones 60 million years ago. We would encourage people to come along, view the interpretation and judge for themselves.”

The most contentious part of the news is that the Trust worked with an organisation called the Caleb Foundation, which represents the small minority of Christians who hold Creationist views. The Foundation’s chairman, Wallace Thompson, said he had “worked closely” with the National Trust and was pleased that the visitor’s centre “includes an acknowledgement … of the legitimacy of the creationist position”.

This is what Professor Brian Cox has to say about the legitimacy of the creationist position: 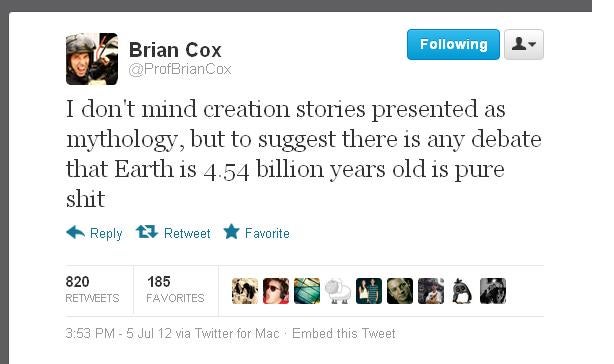 It’s extremely disappointing to see the National Trust giving credence to bogus creationist explanations for this world famous heritage site. Visitors, many of whom will be children on school trips, expect to be informed at the new Centre, not presented with religious propaganda.

We’ve seen how Christian fundamentalists have gained ground in promoting creationist nonsense in the United States; we must be vigilant and not allow those kinds of ideas to gain a foothold in this country.

The strategy employed by the Caleb Foundation here appears to be one pioneered by the Discovery Institute in the US, calling “teaching the controversy“. By insisting that the views of an incredibly small minority (of both the general population, and indeed Christians) are included in discussions of the subject, the ploy aims to create the impression that an issue is not settled. (A similar strategy is employed by those who question man-made climate change, which is supported by the overwhelming majority of scientists and relevant research.)

This is, as far as we are aware, a first for the National Trust anywhere in the UK, and it sets a precedent for others to follow. We feel that it is important that the centre, which has been largely funded out of the public purse, should be inclusive and representative of the whole community, and we have therefore been engaged in detailed and constructive discussions with the Trust in order to secure the outcome we have today.

In the interests of inclusivity, and embracing different perspectives, perhaps the National Trust should include the view – genuinely held by some – that aliens built Stonehenge. Or perhaps potential visitors could simply wait for the Genesis Expo museum in Portsmouth to reopen after its refurbishment?

UPDATE: I have spoken to the National Trust press office, and they confirm that they consulted the Caleb Foundation, although “this was one of many local groups [they] spoke to”.