After an excruciating few days, the Romneyshambles is finally coming to an end as Mitt departs Britain, tail between his legs. It really has been gaffe-ridden, as he’s insulted Britain, he’s failed to sell tickets to his fundraiser, and he’s suggested we aren’t doing the Olympics very well (even a stopped clock…). But one of his “gaffes” has a decidedly darker undertone, when an unnamed aide was reported by the Telegraph to have commented that Romney would be a better President than Obama because only he understood the “shared Anglo-Saxon heritage” that Britain and America have.

This sort of statement is known in politics as a “dog whistle”. To most people, it looks innocuous, if a bit weird, but to its target audience – in this case, racists – it reads as a perfectly clear statement that Romney is better than Obama because he is white. It’s noticeable, for example, that Romney did not bring up the fact that Ed Miliband, the son of Polish Jewish migrants, also does not share an Anglo-Saxon heritage.

Not that this is anything new in the Republican party. Consider Romney’s “gaffe” just number 5 in the Top Five Racist Republican Dog-Whistles of all time:

Quick pop quiz: What’s Barack Obama’s middle name? Even if you haven’t read it from the line above, it seems pretty likely that you know it’s Hussein. Now, do you know John McCain’s? (It’s Sidney) What about Mitt Romney’s? (Trick question. Mitt is his middle name, and his real first name is Willard. But even he forgets that sometimes)

There is a reason you know the former’s but not the last two. It’s because reminding everyone that Barack Obama has, not just a scary foreign-sounding name, but a scary, foreign and Islamic sounding name which is the same as that nasty dictator plays really well with a Republican audience.

To his credit, John McCain never got on board with that angle of attack, even going so far as to apologise for a radio commentator who did. But that doesn’t mean the Republican base has forgotten their President’s middle name.

Less a dog-whistle, more a klaxon, this one. In 1956, the state legislature of Georgia voted to adopt this as their flag: 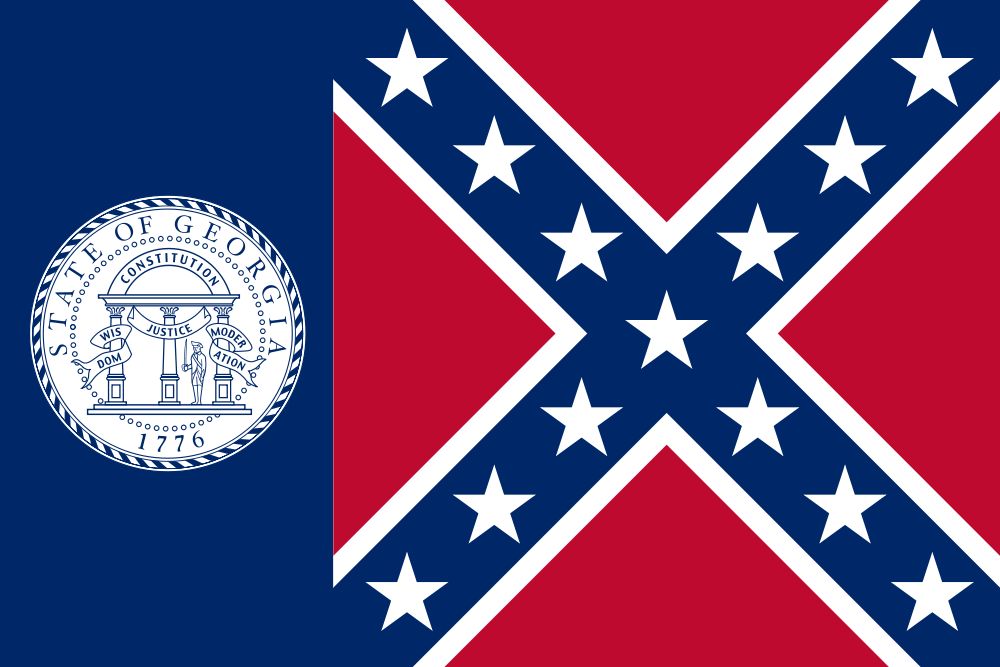 which is awkwardly similar to the Confederate battle flag. You know, the one people marched under as they went to war to defend their right to keep people in slavery? That one. Now, Mississippi also has a flag which contains the confederate one, but at least theirs was adopted in the 19th century. Georgia, on the other hand, voted for theirs in 1956, and then proceeded to keep it until 2001. And even when they replaced it, the new one still had the confederate flag on it, albeit much smaller. It was only in 2003 that they successfully de-racisted.

Even then, it still didn’t stop being flown in the skies of Georgia – it just flew in less of them. The city of Trenton, Georgia (population 1,942) promptly adopted it as their official flag, and still use it today.

On the campaign trail in 1980, Ronald Reagan gave an infamous speech in Mississippi, where he told assembled supporters that:

I believe in states’ rights…. I believe we have distorted the balance of our government today by giving powers that were never intended to be given in the Constitution to that federal establishment.

It is perhaps the archetypal dog-whistle statement. To most people, it sounds like a statement on constitutional law. Yet to the residents of Nashoba County, where the speech was held, it is a clear call-back to what many still viewed as an illegitimate federal imposition: the civil rights agenda. Desegregation was fought bitterly throughout the South, and even drove the government to institute martial law in some areas.

Even worse, the Nashoba County Fair was very close to the town of Philidelphia, Mississippi, where three civil rights activists were shot and killed in 1964.

In that context, saying “I believe in states’ rights” sounds an awful lot like saying that Reagan believed that the decision as to whether or not to desegregate should be handed back to the states – and if they decided against it, they should be allowed to. As New York Times columnist Bob Herbert wrote in 2007:

Everybody watching the 1980 campaign knew what Reagan was signaling at the fair. Whites and blacks, Democrats and Republicans — they all knew. The news media knew. The race haters and the people appalled by racial hatred knew. And Reagan knew.

He was tapping out the code. It was understood that when politicians started chirping about “states’ rights” to white people in places like Neshoba County they were saying that when it comes down to you and the blacks, we’re with you.

The number one racist dog-whistle has to be the relentless accusations that Barack Obama wasn’t born in the US. Unlike the others, it’s one that has a point beyond propaganda – the “birthers” hope beyond reason that they’ll be able to prove he is of foreign birth, and thus render him ineligible for the Presidency – but it serves that aim admirably as well.

The Guardian‘s Michael Tomasky sums up the thinking of the people who spread the myth:

They likely know no one who voted for Barack Obama, so all the information they received in 2008 that they trusted – not from the media, but from friends and co-workers – led them to search for explanations fair and foul. Acorn and the journalists helped them feel a little better, but they didn’t solve the basic problem: that the man occupied the office.

And so, the birther story. Perfect. Explained everything. A conspiracy of immense proportions, concocted all the way back in 1961, had to be the only explanation for how this black man got to the White House. And if you think race isn’t what this is about at its core, ask yourself if there would even be a birther conspiracy if Barack Obama were white and named Bart Oberstar. If you think there would be, you are delusional.

Even releasing his actual birth ceritificate didn’t stop the crazies, but it did at least get everyone else to recognise them as such, until, at the White House Press Correspondent’s Dinner last year, he could safely mock them: