For so long “the party of the armed forces”, the Conservatives are to reduce the military to its smallest size since the Napoleonic wars (see graph). The defence secretary, Philip Hammond, announced in the Commons today that 17 units will be axed as the number of soldiers is reduced by a fifth from 102,000 to 82,000. For many Tory activists, not least when the overseas aid budget has received a 35 per cent real-terms increase, this is unconscionable (defence spending will be reduced by 7.5 per cent). ConservativeHome editor Tim Montgomerie, who I profiled for the New Statesman earlier this year, tweeted this morning: “Biggest tax burden since WWII. Smallest army since Victorian times. This isn’t Conservatism.” 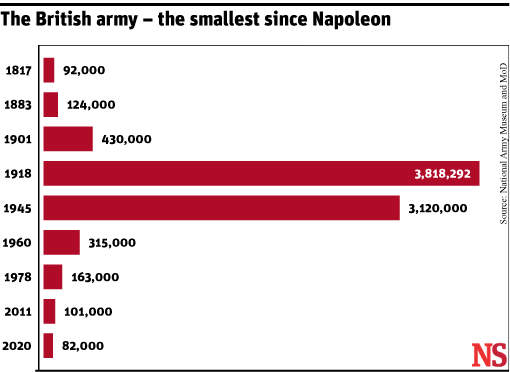 Labour and its shadow defence secretary, Jim Murphy, scent a political opportunity. In his response to Hammond’s statement, Murphy declared:

These decisions flow from a Defence Review which put savings before strategy.

Now our Forces face a perfect storm. We are seeing the largest number of Service-leavers in a generation at a time of deep recession.

Today, jobs and military capability have been lost and tradition and history have been sacrificed.

This isn’t just a smaller Army, it’s also a less powerful army in a less influential nation. And today our Armed Forces and their families deserve better.

Murphy believes that the Tories’ latest assault on a traditional British institution offers Labour a chance to burnish its credentials as a patriotic, “one nation” party. In response, we can expect the coalition to remind Labour of the reason for those “savings”: the £158bn deficit it inherited from the last government. Given that Murphy has previously warned Labour that it must be “credible” on public spending, rather than “populist”, he may find it harder than most to rebut this argument.