“I can’t believe it, said the young activist running the board, ‘why on earth would they vote against their own class interest?’”

We were on one of the most run-down estates in Dudley. Boarded-up homes on one side of the street. Wonderful, proud flag-flying homes on the other. A burst of freezing rain had pulverised the canvass sheets to paper mache, and our little band of wind-burnt veterans were taking it with both barrels from working class voters, each balefully recorded on what was left of our sheets as very firmly “against”.

Such was the demonisation of Jeremy Corbyn, that one man told me he saw our leader as a “communist terrorist sympathiser” who wouldn’t push the nuclear button, sing the national anthem, or stand up to the Russians, even when their spies poisoned our citizens in Salisbury.

On door after door, we heard similar views. Yet the activist’s question is a good one. Why would someone, anyone, at the sharp end of a decade of austerity on one of the most deprived estates in Britain, hate the party promising to transform their living standards?

For the very simple reason that large numbers of voters — especially older voters — put more faith in the neo-nationalism of Boris Johnson — they honestly felt it was a surer, safer path to security than anything we had to offer.

In retrospect, this election may offer good evidence for what’s become known in the PolSci literature as “cultural backlash” theory. Pippa Norris and Ronald Inglehart, who published the eponymous book this year, put the argument like this; “Today the most heated political issues in Western societies are cultural.” Their theory is that changes in attitudes amongst the younger, and more diverse communities now growing around the Western world, has triggered what they call, “an authoritarian reflex, a defensive reaction strongest among socially conservative groups feeling threatened by the rapid processes of economic, social, and cultural change … finding reassurance from a collective community of like-minded people, where transgressive strongman leaders express socially incorrect views while defending traditional values and beliefs.”

Look around the world and you can certainly see the neo-nationalists from Trump to Modi to Orbán to Johnson, polishing this language, translating it into online tactics, not of divide and rule, but enrage and rule; inflaming any division within easy reach to mobilise majorities big enough to win elections.

And, in an age of weariness, disbelief and sulphurous scepticism, it is a reality that many voters feel the best test of a party is the character of the boss, not the content of the blueprint. The allure of patriotism is more than worth a hundred pages of a progressive plan. As it happens, voters didn’t think much of Boris Johnson’s character. They thought he was a charlatan. But as the Brexit-defender in this election, his motives were at least seen to be animated by a passion to defend the national interest.

And this is a very serious challenge for the left. For all the talk of “youthquakes”, too many forget that the majority of actual voters are over 55 — and are likely to be so for may years to come. In the seats Labour lost there were (on average) more over-65s than there were 18-29 year olds. In fact, initial work from Ipsos Mori shows that in the UK as a whole, the over 65s vote dwarfs the youth vote. 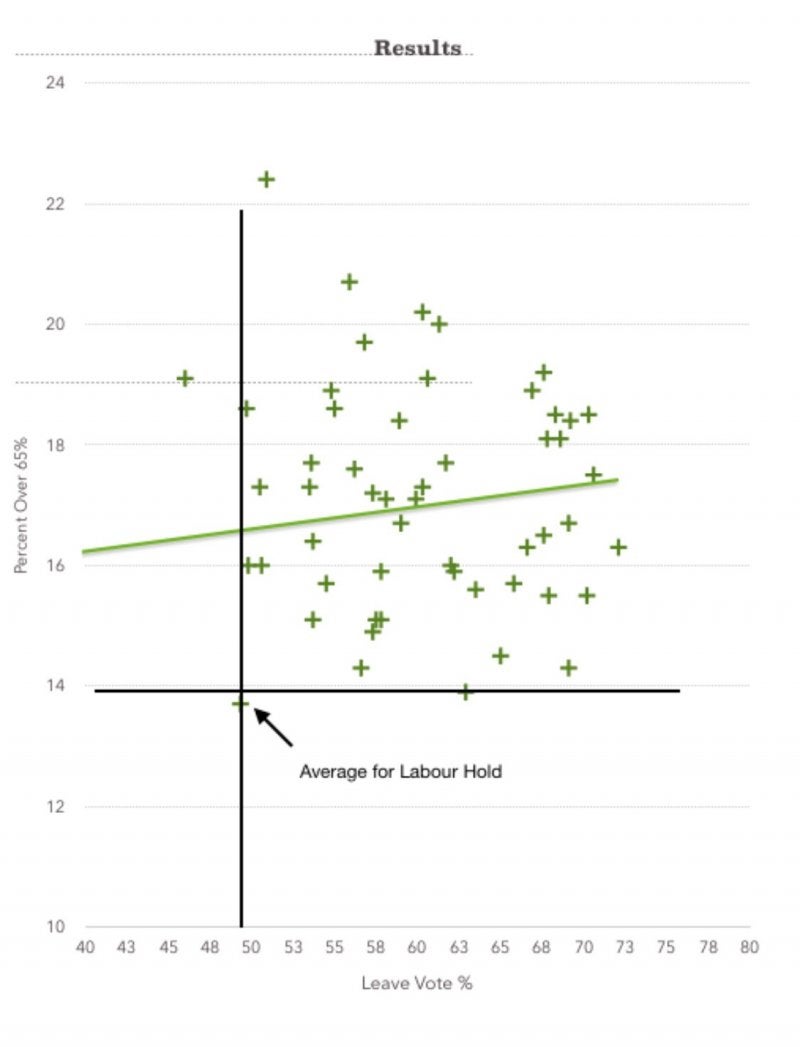 There are just 5.5 million 18-24 year olds in the UK, and less than half voted. By contrast, there are 11.8 million over-65s and 74 per cent voted. The Tories’ massive share of this group meant they secured 5.67 million over-65s — that’s three and a half times more voters than the number of young people who voted Labour. In fact, out of 13.9 million Tory voters at the general election, 40 per cent of their vote was over 65.

Welcome to the future if we don’t change. In 1998, around one in six people were 65 years. That fraction will rise to around one in every four people (24.2 per cent) by 2038. Labour has NO future if it continues to bat at 17 per cent amongst the over-65s.

Yet, there is no future for the left in following the right down some “authoritarian reflex”. It’s not who we are. But the 2019 election was an invaluable lesson that we can never leave a gap; in particular a yawning chasm where an optimistic, progressive, inclusive patriotism should be.

Some 13 years ago Billy Bragg wrote in his excellent book The Progressive Patriot, “Reluctant to make any concessions to reactionary nationalism, we have, by default, created a vacuum, leaving it to the likes of the BNP and the Daily Mail to decide who does and who doesn’t belong here.”

This is, I’m afraid, still true. Why do we leave the field to them? We’re not nationalists. But we can be patriots. As Charles de Gaulle once said, “Patriotism is when love of your own people comes first; nationalism, when hate for people other than your own comes first.” And ironically, “progressive patriotism” was there at the very dawn of the radical tradition, set centre-stage by a man Jeremy Corbyn much admires: the great Leveller, John Liliburne.

“[T]he second son of a gentleman in the north parts of England,” Liliburne was brought up in the north-east but came to London aged fourteen and before long was inventing a language which echoed down the radical tradition for centuries.

Christened “Freeborn John” for his refusal as a “free-born Englishman” to bow to corrupt courts, he returned over and over again as “a true-hearted Englishman” to “the radical face of the ancient constitution” which, he argued, enshrined power with the people, guaranteed the rights of Magna Carta as the birthright of all, and promised to all the freedom to earn a decent life, all of which had to be defended against “the encroachments and usurpations of Kings, Lords and Priests”, along with vested, privileged interests and monopolists. As the Levellers’ chief advocate, Colonel Rainborough put it in the Putney debates; “For really I think that the poorest he that is in England hath a life to live, as the greatest he.”

This was the birth of the case for political and economic democracy, rooted in an appeal to our history, and here was the taproot for every radical that followed; the followers of Thomas Paine and the Jacobin John Thelwall, who argued so passionately for the artisan and small trader who merely sought to raise himself by “the sweat of his brow” in the face of “monopoly, and the hideous accumulation of capital in few hands”.

In their wake came the Chartists, the Christian reformers and the Cooperators together with the Methodist founders of working-class Labourism, with their intonation of “brotherhood” and their inspiration from Isaiah (XLI, 6): “They helped every one his neighbour; and every one said to his brother, be of good courage.”

This was radical patriotism; a defence of the ancient radical tradition, the economics of the moral economy and the politics of true democracy. This is the patriotic spirit that ran through the speeches of Clement Attlee and the books of George Orwell. Attlee, as his biographer John Bew recently reminded us, was best “understood as the 20th-century inheritor of a tradition born in the era of the English Civil War”; with a fidelity “not to caste or cohort, but to the idea that the commonweal was the first goal of government” complete with a sense of obligations and liberties.

The argument was not simply for the “absence of constraint” and habeas corpus, but for freedom from fear and a freedom to flourish, free of the corruption and unfettered use of arbitrary power, whether that power was wielded by monarchs, monopolists, judges or Dragoons. It is the liberty of Franklin Roosevelt’s Economic Bill of Rights. And it is the escape route from the identity politics fracturing the left across the western world.

As the American political scientist Mark Lilla recently observed, identity politics was at first an effort for large classes of people to right major historical wrongs. But, in the US and arguably elsewhere, “the rhetoric of identity has crowded out the analysis of class”. And as Lilla reminds us, “Democratic politics is about persuasion, not self-expression”. That persuasion will surely rest on an appeal to build a better future with pride in our past. “Patriotism” is bigger than narrow interests. Remastering this as, both Roosevelt and Attlee did once before, is now absolutely vital in defending ourselves against the “cultural backlash” and winning back the seats we lost to the Tories, which were home to far more older residents, and much less diverse than the average “Labour hold”.

My argument is this: it is simply unpersuasive to stand up a story about a shared future without lighting it up with a pride in our favourite bits about our shared past. Politics, especially modern politics, is not a 2-D technical drawing. There’s nothing “blue” about this. We’re not trying to conserve all that’s past, or God forbid, return to it. And I speak from experience when I say, it would be a terrible error to even think about substantiating this with policy prescriptions that touch on immigration or citizenship policy. That is a rabbit hole.

Rather, we need a strategic narrative that celebrates how down the ages, in epic struggles, our country did forge new rights, new freedoms, new possibilities. And the historic task of the Labour Party has always been to battle in the teeth of privilege and corruption and make a democracy of these things.

We don’t need to worry about pinning down some uniquely British values. It’s fine, as Attlee put it, to “be proud of our own show” and champion the truth that down the centuries we have stood up for great principles. It doesn’t matter if they are not unique. It’s about the things, the places, the traditions that we love most about our home, including I might say the spirit of compassion. Think of the Daily Mirror’s Pride of Britain Awards. Or the London Olympics opening ceremony. Were the courage, character, virtues and values they showcase unique? No. Are we proud of them? Absolutely. Because they are precious and imperilled.

Ultimately, patriotism is what Yuval Noah Harari calls an “imagined order”; a vast imagined psychic world of bonds that connect us together and which crucially allows us to cooperate in vast, dense societies with a minimum of violence. And because inclusive patriotism, in contrast to nationalism, is something which helps us cooperate, it is therefore a route to fraternity — fraternity we desperately need if we’re to muster the scale of cooperation we need to rise and solve vast collective problems like climate change and, indeed, the prosaic task, of winning elections.