“There will come a day,” I wrote on Tuesday, “when you look back on 23 July 2019 and think how good we had it now.” I admitted at the time that this would happen sooner than we expected – but even I was not quite prepared for the day in question to be Wednesday 24 July 2019, at about 6.04pm, when rumours started to fly that Dominic Raab was to be Britain’s new Foreign Secretary.

Because the new government is so, so much worse than I thought it would be. I had naively imagined that, with no real majority and a parliamentary party fatally divided over Brexit, Prime Minister Boris Johnson (OH GOD IT’S EVEN WORSE WHEN YOU WRITE IT DOWN) would feel under some kind of pressure to balance the different factions of his party. I imagined there’d be wets/Remainers/people with right-wing views but who are still vaguely in touch with reality in the cabinet to restrain the crazies.

Not a bit of it. Dominic “feminist are obnoxious bigots” Raab as foreign secretary! Priti Patel, who was sacked for trying to unilaterally change Britain’s policy towards Israel, back in government as home secretary! Leader of the House Jacob Rees-Mogg! An entire government that thinks that a no-deal Brexit might be in some way fun!! We’re all going to die.

But I need, somehow, to find a reason to continue getting up in the morning at a time when the news reads like something Russell T. Davies made up to put in the background of Years & Years. It’s this or just go stand outside for three or four minutes and just let the heat take me.  So, here are seven reasons to be optimistic about Britain’s new cabinet.

1. Chris Grayling isn’t in it

Having spent the last three years bemoaning the fact that Britain’s least competent man had been given the job of ensuring the British public can keep moving about, it would be churlish not to take some small satisfaction from the fact Chris Grayling will no longer be in a position to ruin commuters’ lives.

There are some downsides to this. One is that Grayling got to step down of his own accord, rather than being fired and then facing some kind of tribunal for his crimes against Northern Rail passengers. The other is that his replacement is Grant Shapps, which, hmmm.

Nonetheless: on Tuesday, Chris Grayling was the man responsible for Britain’s railway network. As of Thursday, he wasn’t. That’s something.

2. Neither is Liam Fox

Fox, too, should really have been fired years ago – actually, after screwing up so badly in 2011 that the head of the civil service described him as a security risk, he should never have been allowed back into government at all. So his departure too should be a good day.

Except, again, he’s stepped down of his own accord. And now that disgraced former international development secretary Priti Patel is Home Secretary, I almost look back fondly on the days when disgraced former defence secretary Liam Fox was at international trade, if only because he has, in recent months, shown some sort of awareness that no-deal might be a bad idea, like that bit in The Crucible when the witch-finder denounces his own court.

3. A bunch of Tories just got humiliated

Matt Hancock, abandoned his sensible centrist credentials to back Boris Johnson, in a manner that led everyone to assume he was in line for a big promotion. What he actually got was… Health Secretary, the job he already had. LOL.

While we’re at it, James Brokenshire was one of the first cabinet ministers to come out for Boris Johnson’s leadership campaign: he just got sacked as housing secretary. Immigration minister Caroline Nokes, meanwhile, found out she’d been sacked on Twitter: 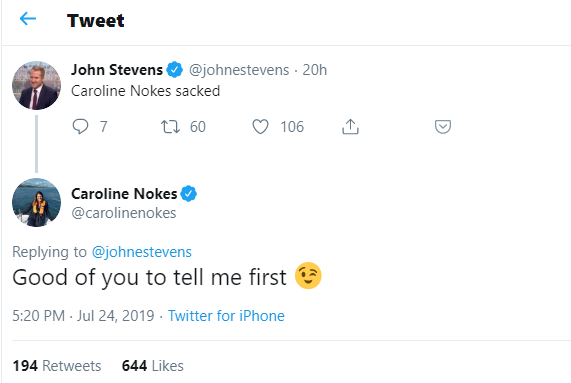 So, all that was fun.

4. It is probably better that Patel got Home Sec and Raab got FCO than the other way around

Priti Patel is a terrifying prospect as Home Secretary, not least because she supports the return of the death penalty and has a nasty habit of voting against human rights. But this government doesn’t really have a majority, so even if she supports the death penalty she is not going to be able to bring it back. Given her record, I fear she would do far more damage as foreign secretary, where the lack of a majority would be less of a constraint.

In the same way, Raab is a terrifying Foreign Secretary, not least because as recently as November 2018 he seemed genuinely baffled to learn about the existence of the English channel. But at least Britain’s favourite 4chan argument about feminism reincarnated in the body of Kryten from Red Dwarf is not, as was at one point rumoured, home secretary. Small mercies, eh?

There is an argument, with which I have some sympathy, that only allowing minorities to ascend to top jobs when they espouse reactionary politics is not actually very progressive. And it would be optimistic, bordering on moronic, to imagine this will mean a swift reversal in the May government’s “foreigns go home” approach to immigration policy.

Nonetheless, representation matters in and of itself: British Asian kids will see people who look like them in senior government roles. That’s a consolation, however fleeting.

6. This lot have no majority to do anything

Son there’s a limit to how much damage they can do in a lot of policy areas. The one area this might not be true in is Brexit, where if nothing else happens we’re ejected automatically without a deal on 31 October which is terrifying because of the food and medicine shortages, collapse of sterling, closure of businesses and so forth that will inevitably ensue.

But it does at least mean they can’t just implement every mad policy they come up with.

7. There’s probably going to be an election

Another reason I’d assumed Johnson would find roles for at least some of his more moderate (I used the word advisedly) colleagues was because, when you don’t have a majority, the last thing you want to do is to make enemies.

Yet that’s what he did, sacking over a dozen senior ministers in a burst. There are now a significant number of Tory backbenchers with good reason to hate the Tory leadership – and no government majority.

The obvious interpretation here is that, whatever Johnson has claimed, we are now heading for an autumn election: he is gambling on winning a majority that will overcome these problems and give him a mandate, probably involving some kind of pact with the Brexit party.

This is, from some perspectives – most perspectives, actually – terrifying, because it might work. But then again, it might not. The pact might not come off, splitting the pro-Brexit vote and handing vast numbers of seats to Labour or the Lib Dems. Boris Johnson might lose, and having fulfilled his lifetime’s ambition of moving to Downing Street become one of the shortest lived prime ministers in British history. And then we wouldn’t have a Tory government any more.

It would be a fool, after all, who looked at an unpopular government nine years into austerity, a crumbling public realm, and polls showing a four-way split in the vote who thought that a Tory election victory at this point was a lock. If we have an election now, anything could happen. Jeremy Corbyn could be prime minister by Christmas. So could Jo Swinson, FFS. Exciting!

Then again, this could be how we end up with Boris Johnson winning a massive Tory majority and Nigel Farage in the House of Lords.

I’m going outside now. I may be some time.