With a few hours to go until the polls close, how are the three main parties likely to fare tonight?

As I noted last month, it’s likely to be a good night for Labour, even if Boris is re-elected to City Hall. The annual pre-election forecast from Plymouth psephologists Colin Rallings and Michael Thrasher, based on local by-election results, suggested that the party could gain as many as 700 seats. Since then, LSE elections expert Tony Travers has predicted (£) that Labour’s total gains are likelier to be closer to 800 seats, with 900 required “for a good night”. The Conservatives’ woes, he suggested, would limit Lib Dem losses to 100-200 seats, with the Tories losing 500-600 (see graph).

Unlike last year, Labour is also expected to win a higher national equivalent share of the vote than the Tories. When the seats falling vacant were last contested in 2008, the party, then led by Gordon Brown, won just 24 per cent of the vote. But this year, Labour is expected to win 37 per cent, with the Tories down nine to 34 per cent and the Lib Dems down five to 18 per cent. 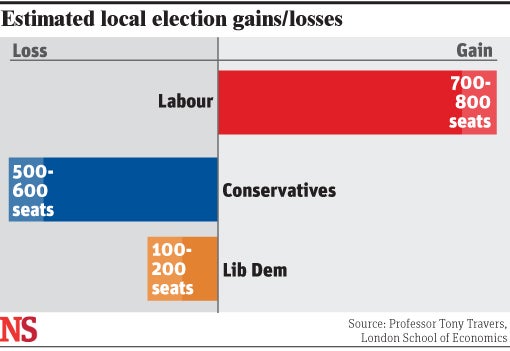 The one event (aside from the London mayoral election) that could spoil Miliband’s evening is a Scottish National Party victory in Glasgow. Labour has already lost overall control of the council for the first time in 35 years after a series of resignations and defections, and the SNP, which won five of the city’s nine constituencies in last year’s Scottish Parliament elections, is hoping to win a majority. Should Alex Salmond’s party also gain North Lanarkshire, Labour could be left without overall control of a single Scottish council. Such an outcome would confirm the SNP’s hegemonic status in Scottish politics and provide it with another platform to make the case for independence.

Miliband will rightly attribute the (likely) defeats in London and Scotland to local factors but that won’t stop the press asking, “if Labour can’t win in London and Scotland, where can it win?” Miliband’s hope is that the party’s gains elsewhere will answer that question. Labour expects to win more than a dozen councils, including Birmingham, Cardiff, Plymouth and Carlisle.