Rosie bought the white sunglasses first, but Jenn was first to pose by the pink panelled wall. Initially, everyone thought that Rosie wore the red-and-pink dress before Jenn, but then someone found out that Jenn actually posted a picture of it on 26 December 2016.

These facts are important because there is no denying that the Instagram feeds of Chicago-based influencers Rosie Clayton and Jennifer Lake are remarkably similar. A quick glance at their profiles, which feature the fashion-gurus posing in front of brightly coloured walls, shows undoubtedly that one of the women is copying the other. Everyone can see the similarities – most can’t see the big deal.

“When someone copies you… a small part of your creative soul dies inside,” wrote Jenn Lake in a December blogpost in which she accuses “an individual” of repeatedly copying her content. Though she does not name the accused Instagrammer (and tells me that she never plans to), a local website called Chicago Mag started the rumour that she was referring to Rosie Clayton, who wears similar clothes, uses similar puns, and poses near the exact same painted walls in her pictures.

Wall War One had begun.

“I will not allow false and malicious accusations to destroy what I’ve worked so hard to build,” Rosie tells me now, over email, two weeks after the allegations were first published. She says that although she has tried to remain silent, she was worried this looked like an admission of guilt. The initial article featured Instagram pictures that made it appear as though Rosie was copying Jenn. Jenn wore a blue dress and tan heels in front of a leafy wall on 2 November, Rosie did the same seven days later. On 12 October, Jenn posed in pastel pink next to a painted garage door, Rosie’s similar picture arrived on 15 November. Nearly a whole month before Rosie, Jenn took a picture in front of an avocado wall. 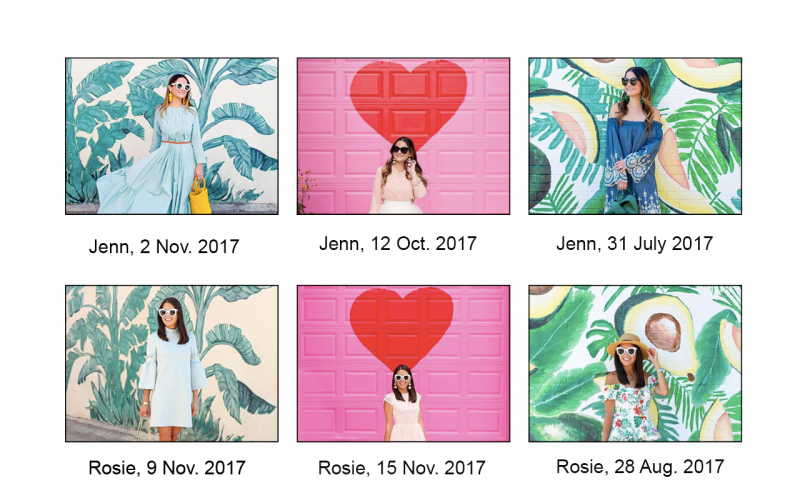 “I have over 2,700 posts and the same five images keep coming up in these articles,” says Rosie (the feud has made headlines in Elle, Mail Online, The Independent, and Harper’s Bazaar.) “I’m constantly pushing myself to experiment with new techniques so my posts are dynamic and compelling.”

On 25 October, Rosie posed in front of a multi-coloured geometric wall while wearing pink. On 11 November, Jenn did the same. Rosie had uploaded an Instagram of a blue and purple mural on 22 September – Jenn didn’t do so for another six days. In March 2016, Rosie stood next to a blue-and-black wall in Florida. Jenn’s similar post was uploaded on 10 January this year. Two years ago on 8 December 2015, Rosie’s picture of Christmas gifts was captioned with the pun “No time like the present”. Twelve days later, Jenn’s Christmas gifts were captioned with the exact same words. 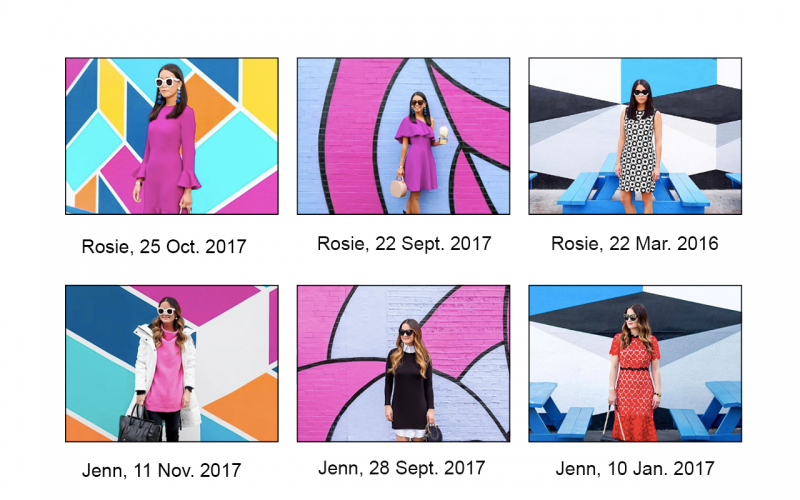 Jenn and Rosie used to be friends.

In February 2014, it appears as though Jenn Lake and Rosie Clayton travelled to Texas together. Photos on their Instagram show them posing by the Prada Marfa sculpture – and when they visited Austin’s Big Top Candy Shop they held up lollipops for the camera. It even seems as though they had a friendship hashtag for the trip – #R2J2.

“It would be conjecture for anyone to be targeted or named as a result of my blog post,” says Jenn, who refuses to name the accused individual. Yet whether or not Jenn was talking about Rosie, it doesn’t change the fact the media is.

“To have my hard-earned successes and name tarnished by these allegations is childish and petty,” Rosie says, explaining that she has 16 years’ experience in the fashion industry, owning a women’s boutique for eight of them. “I vehemently deny any allegations of copying”.

Rosie’s explanation for her and Jenn’s similar posts is most likely baffling to Instagram-outsiders (and perhaps some Instagram-insiders too). “My images are planned, shopped, and created, on average, 30-120 days in advance,” she says. Why? “To create a cohesive colour story”. Rosie’s feed is organised by colour, so she, for example, may post pink-themed images one week, blue another, and yellow the next. The fact that pictures aren’t always posted after they’ve been taken adds confusion to the feud – for example, Jenn actually first posed in front of the multi-coloured geometric wall in May, and did so again in August. So does it matter that she posted a picture of it in November, just a couple of weeks after Rosie’s similar snap?

A step in the bright direction  {more on the blog} This ruffle jacket is under $100 and also comes in blush and black! Details via @liketoknow.it http://liketk.it/2sz5k #liketkit

“If, and only if, there is a new wall that compliments my current colour story, or a time-sensitive brand collaboration, will I include it in my grid at the time,” explains Rosie of her process. “In other words, posted images are rarely taken the same week as when they go live on my channel.”

Perhaps this makes sense, but it leaves one question. Why walls?

It was Jenn who first posed in front a light-pink-wall-with-a-grey-bottom on 2 April 2014, months and months before Rosie did the same on 27 November. On 5 June 2014, Jenn posed in front of the hot-pink panelled wall – Rosie followed suit on 6 November.

No one, of course, can patent standing in front of walls. This type of picture has been popular on Instagram for years, but Rosie and Jenn have both made their careers by dedicating their entire Instagram profiles to walls (and using puns and wearing sunglasses). 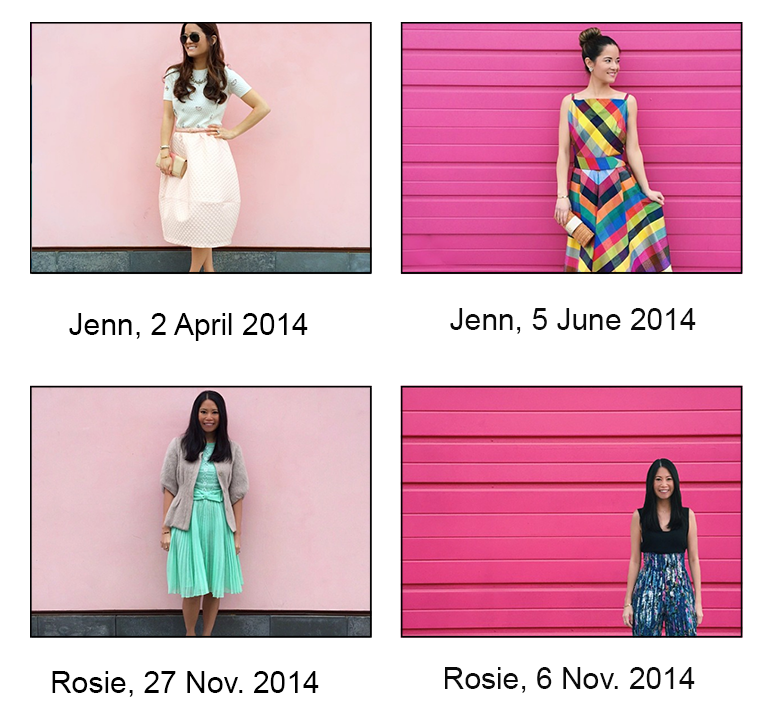 It is undeniable that Jenn began dedicating her feed to the wall-theme first, months before Rosie in 2014. Yet Rosie has an explanation as to why she started posting walls soon after Jenn: she was asked to.

“In 2014, I was posting colourful, creative flat lays with pun captions and also featured colourful design and interiors. Consequently, my images captured the attention of various colour bloggers,” she says, explaining that she was asked to create a “Chicago Wall Guide” for Studio DIY, a Los Angeles-based blogger. “I worked on the guide in the spring of 2015 and it was published to StudioDIY in January 2016. Creating this guide, I fell in love with colourful street art and the way murals and walls could bring a look to life.” Jenn released her own Chicago wall guide on her blog on 3 January 2016.

Most who aren’t already involved in this drama might find it increasingly difficult to pick a side. There is no smoking gun in the case, and investigating it involves scrolling through Instagram for hours at a time. Did Rosie copy Jenn when she posted a picture of a neon sign on 23 January 2015 – the same sign Jenn had posted seven days earlier? Or were they friends at the time, and had they gone to the same place together? What constitutes plagiarism anyway? Can you patent puns? Aren’t the real victims the artists behind the murals, who are getting barely any credit from either of the influencers who profit from their work? 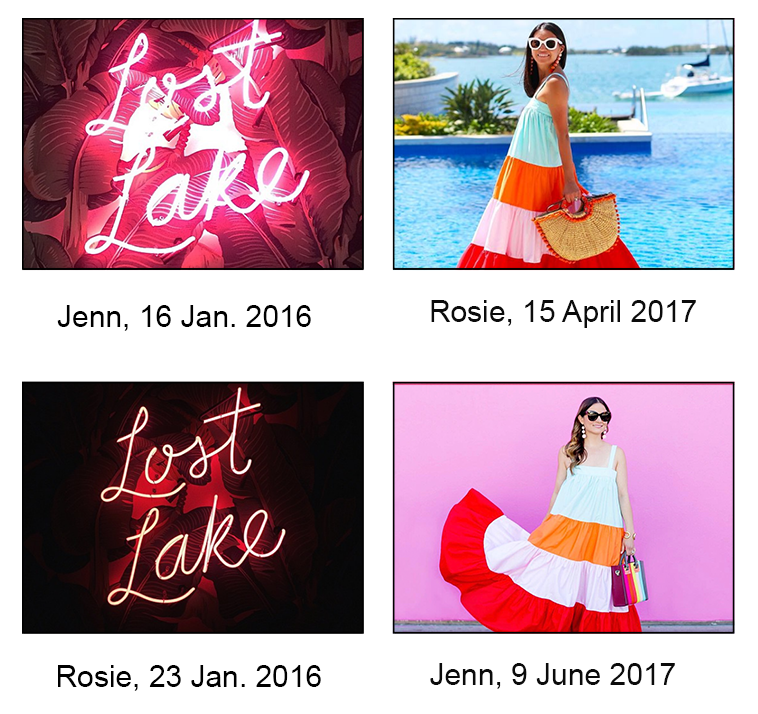 It is tempting to think none of this matters, but Instagram influencers earn a lot of money for their brand deals, blogs, and books. If someone copied Jenn, as she alleges in her blogpost, this could “rob [her] of money and campaigns”. Alternatively, Jenn’s accusations being interpreted as an attack at Rosie could hinder the latter’s opportunity for brand deals. It’s easy to see how this argument could damage both women’s businesses.

Oh, but then again, both of them have gained tens of thousands of followers since the feud was first publicised two weeks ago.

Is this all a cunning PR trick planned by two pals to get more followers? It is, after all, the oldest trick in the book. Rosie forcefully denies this rumour, which has been posted in comment sections under articles and on social media sites.

“My original content is what has built my Instagram audience – not sensationalised headlines, leveraged connections, or calculated publicity stunts,” she says.

Jenn tells me over email that her motivations were simple. “The point of my blogpost was to shed light on the fact that these kinds of situations are prevalent in social media, and that the community of bloggers, influencers, and readers should have a dialogue to find worthwhile solutions.”

For her, these solutions are also simple. They involve unfollowing copycats, alerting the person being copied, and “choosing sides”. She also wishes Instagram would create rules against “systematic copying”.

This solution may work in the abstract, but in practice it seems impossible. It is undeniable that in recent months, Rosie has posted pictures that are remarkably similar to ones Jenn posted weeks earlier. It is also undeniable that in the past, Jenn has posted pictures and worn certain dresses after Rosie (she has since deleted the 9 June 2017 picture in which she wore the same colour block dress a few months after Rosie). And yet, there’s no escaping the fact that Jenn did start dedicating her profile to walls long before her ex-friend. But then again, there’s the small matter that literally hundreds of thousands of Instagrammers also post pictures by brightly-coloured walls, and the platform is built on imitation and trends (Fashionista.com announced that “wall scouting” had become a thing in 2015, meaning both women ramped up their wall-based photos at a time the industry as a whole was doing so). On top of all this, there is absolutely no way either influencer can copyright wearing sunglasses or using puns.

Now Rosie has broken her silence, both influencers have told their side of the story. Nearly everyone who cares will have an opinion on who is wrong and who is right. In the coming months, both fashion-lovers will be under intense scrutiny. Though each of them would most probably like to put the incident behind them, the war of the walls has only just begun.