Marie Le Conte grew up alongside the internet. The French-Moroccan journalist, best known for her political commentary, was born in 1991, the year the World Wide Web was launched, and spent her formative years entwined in the rapidly growing online universe. “I was part of that generation who were the first who properly grew up online,” she explains when we meet at the New Statesman offices. So when the Covid-19 pandemic hit and the entire world suddenly went virtual – with remote meetings and Zoom quizzes replacing offices and socialising – she was shocked to realise how much she hated it. “I had a nearly physical reaction of saying, ‘Actually, I don’t want to be part of this at all. This is not my internet, I don’t like this, I don’t belong here.’”

The internet, Le Conte realised, had changed. It hadn’t just expanded since the early 2000s but fundamentally altered in nature. The esoteric message forums where no one would be so bland as to use their real name and nice pop culture blogs written by over-sharing teenage girls had been replaced by giant social media platforms dominated by big brands and governed by algorithmic feeds. Worse: everyone was there now – friends, family, co-workers, past partners, future bosses. The place she had gone to escape real life had become real life, so integral to every aspect of modern existence that it was now virtually impossible to disengage.

This paradox is the premise of her new book, Escape: How a Generation Shaped, Destroyed and Survived the Internet, published 1 September. In part, it’s a history of the adolescent internet, from the turn of the millennium, when broadband was becoming commonplace, to the mid-2010s and the rise of Big Tech giants such as Facebook. It’s also a study of the cohort who came of age at the same time, those born roughly between 1985 and 1995, whose adventures in early cyberspace laid the groundwork for today’s relentlessly online world.

“There were 15 years on the internet that were unlike anything else, and that I don’t think you’ll be able to really get unless you were there,” Le Conte tells me. The world she outlines was one inhabited by loners and misfits, where awkward teenagers could go to find themselves, reach out to people across the world with shared interests, create their own communities, forge new identities – anonymously and without adult supervision. It was dangerous, yes – she admits that young people probably should never have been given that much freedom – but also liberating and, above all, fun. So much fun, in fact, that soon it wasn’t just the weird kids who wanted to be part of it. She compares what happened next to a group of children building a treehouse to play in. “And then all their parents joined in and were like, ‘Hello, we hear you have a treehouse. We live here as well now.’” 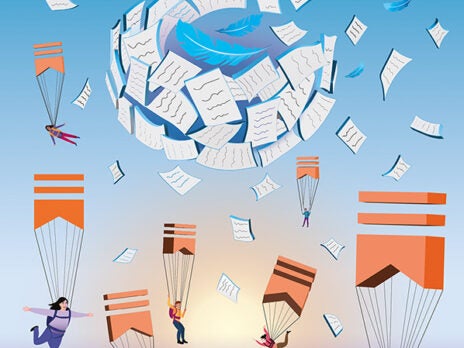 Is Substack the future of media?

What does it do to the online experience when the space where you used to chat to your closest friends is now shared by your mum (Facebook), or when your boss can read your drunken late-night musings (Twitter)? What happens if you know a jokey comment on an obscure fan-site could be picked up by anyone, taken out of context and broadcast to everyone you know? According to Le Conte (who admits she can be a bit melodramatic), the result is the wholesale destruction of everything that made the internet fun in the first place. It has also changed us: the way we define ourselves and how we relate to each other.

“We have all been squished into the same dashboards, timelines and feeds, and we have no idea how to deal with it,” she writes in Escape. “We are, after all, not meant to be the exact same person to everyone we encounter, not because people are inherently duplicitous but because that is how we function.” Yet today’s internet forces us to do just that, creating unnecessary friction.

Nowhere is this more apparent than when it comes to political discourse. Le Conte, a former political diary columnist who has written two books on Westminster culture, is a stalwart of UK politics Twitter and is well aware of how polarised it has become. The consensus view is that the culprit is algorithms that push people into online echo chambers where they are only shown content they agree with, driving them to be more and more extreme. Le Conte, however, sees it differently.

“I basically completely disagree with the premise that we all live in bubbles,” she insists. “The problem is the complete opposite: we’re all together in the same spaces all the time. And that’s actually not how politics is meant to work.” As an example, she cites a row that flared up during the 2019 election when a prominent left-winger tweeted that Labour were close to winning various seats as a way to encourage campaigners on the ground. He was publicly mocked by people pointing out that Labour had no chance of gaining those seats, while the Labour campaign also poured cold water on the idea.

“I remember finding that really striking, because actually, no one is lying here, no one is wrong,” Le Conte says, noting that in election campaigns it’s natural to try to rally activists while also playing down the chances of winning to the media to manage expectations. “That’s politics 101, I’m not inventing anything here. Twitter has destroyed that entirely, because the place in which you talk to the journalists and the place in which you talk to the activists is the same place.” She believes the same phenomenon is what’s driving the toxicity around the trans rights debate: people are scared to ask questions of their own side or engage in good faith with those who disagree, knowing that perfectly reasonable comments can be seen by everyone and potentially used against them.

Ultimately, the more our identities are defined by who we are online, the more a space that once offered liberation now mandates self-censorship. “Fundamentally, we’ll always tailor who we are and what we say depending on who’s in front of us – the internet didn’t make that happen,” Le Conte says. “My worry, I suppose, is that being online has brought the audience inside our heads. Because we never quite know who may be watching, our online lives can never truly be our own.” And it’s not just about who is watching now. Society is only just beginning to grapple with questions about what happens when someone’s past posts come back to haunt them – do we forgive and forget, or let youthful transgressions derail their career? We haven’t decided yet, and while we figure it out a new generation is learning that what they post online must not only be acceptable by today’s standards but pass the purity tests of future decades. Against that backdrop, how free can their speech really be?

As for whether there’s any hope of regaining that anarchic, limitless culture of oversharing and connection, Le Conte is despondent. The treehouse she helped to build isn’t coming back. But she says one reason for writing this book was to explain to those who weren’t part of that charmed generation what it was like, so as an online community we recognise what’s been lost and can perhaps learn from it to build something better. And we need to, because the internet is no longer an escape – it is who we are.

“I cannot differentiate between the person I am and the person I present to the online world,” she writes in the introduction to the book. Increasingly, I wonder if any of us can.

[See also: Learning for its own sake is lovely, but that’s not all university is for]