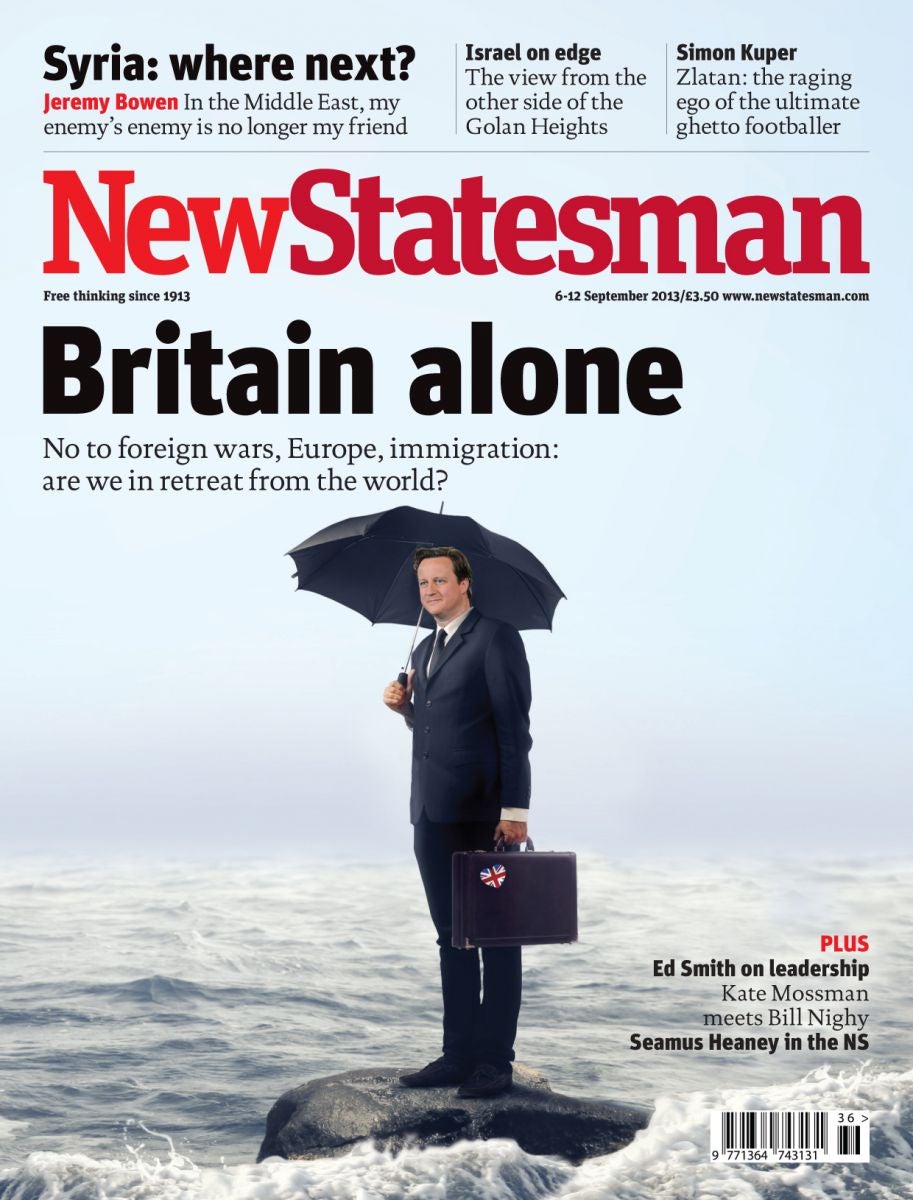 You are invited to read this free preview of the new issue of the New Statesman, out on 5 September. To purchase the full magazine – with our signature mix of opinion, longreads and arts coverage, plus dispatches from Jeremy Bowen in Syria and Uri Dromi in Israel, John Bew on Britain’s new isolationism, an interview with Bill Nighy, and Will Self on breaking the speed limit – please visit our subscription page.

I Am Zlatan Ibrahimovic
(With David Lagercrantz)
Penguin, 352pp, £8.99
“Is there a more debased literary currency than footballers’ autobiographies?” the sociologist of football David Goldblatt once asked. Fans long to know about players’ lives behind the headlines, and yet you close Ashley Cole’s My Defence feeling dirty and stupid for having read it. Wayne Rooney’s attempts so far (for which HarperCollins paid £5m) read as if written by an eight-year-old for nine-year-olds.
What’s more, to paraphrase Woody Allen, not only is the food terrible but the portions are so small: few players write autobiographies any longer. Their clubs discourage them from speaking and they no longer need the money from tell-all books.
However, the genre may now be entering a golden age. “The Secret Footballer”, writing anonymously in the Guardian, offers lucid sociological accounts of dressing-room life. Arsenal’s former forward Dennis Bergkamp is about to publish a memoir that promises to be intelligent. And I Am Zlatan Ibrahimovic, perhaps the best recent autobiography by a footballer, has at last appeared in English.
Zlatan, as he is usually known, is a giant Swede with a ballet dancer’s feet. He has won the league title in nine of his past ten seasons, with clubs in the Netherlands, Italy, Spain and France. During his present stint at Paris Saint-Germain, the verb zlataner – which more or less means “to crush” – has entered the French language. Last year he scored four goals for Sweden in a game against England. But his book shows that he has an interesting mind, too.
Within two months of publication in 2011, Jag är Zlatan Ibrahimovic had sold 500,000 hardback copies in Swedish. By now millions of copies of the book have been sold in over 20 countries. What readers respond to is, first of all, the authentic voice (captured perfectly by the ghostwriter, David Lagercrantz). Like Diego Maradona in his compelling autobiography, Zlatan calls things as he sees them – often to his detriment.
To write the book, he reflects: “I had to go back in my memory, and shit, I realised I hadn’t always been a good person.” Yet the onetime bicycle thief and school bully isn’t presented in a vacuum. Zlatan tells an immigrant’s tale that resonates across Europe as he guides us through the milieu of toplevel football.
His parents, a violent Croatian charwoman and a drunken Bosnian janitor, separated when he was two. He was raised in Rosengård, a deprived area of Malmö. Almost everyone around him was an immigrant, so he grew up knowing almost nothing about Sweden. He never watched Swedish TV, didn’t visit the city centre until he was nearly 17, and lusted from afar after the blonde Swedish girls who lived in actual houses somewhere far from Rosengård. He imagined their parents saying, “Darling, could you please pass me the milk?”, or “Do you need any help with your Swedish history?”. His own relatives mostly exchanged death threats. In his words, “I felt inferior. I held tight to football.” This early section of the book offers a rare insight into European ghetto life.
When he joined Ajax Amsterdam at the age of 19 for a Swedish record transfer fee, his mother was distraught: “God oh God, Zlatan, what happened? Have you been kidnapped? Are you dead?” Seeing his face on TV, but not speaking much Swedish, she had assumed he was in trouble again.
He quickly discovered he had been cheated in negotiations – he was Ajax’s worst-paid player. Nor did the club help the teenager adapt to his new country. Sleeping on a mattress on the floor of a rented home, unable to cook for himself, he lost weight and underperformed. Like many young players, he soon realised that the only person in football who might look after you is your agent. He found a fat little Dutch-Italian ex-waiter named “Mino” Raiola, who became his soulmate. Here’s a specimen of their dialogue:
Zlatan: Fuck you.
Raiola: Go and fuck yourself.
Zlatan: I want to get out of here.
Raiola: Go to Turin then.
Zlatan: What you talking about?
Raiola: I might have something with Juventus.
Zlatan moved onwards and upwards. At Inter Milan he encountered his favourite manager, José Mourinho, a flirt who seduces his players with smiles, text messages and deep knowledge of their family lives. In 2009
Zlatan joined the best club in the world, Barcelona. Barça’s stars – Lionel Messi, Xavi and Andrés Iniesta – turned out to be good boys who went around in tracksuits instead of Gucci and obeyed the manager. “It was just like a school,” he recounts with horror. The coach, Pep Guardiola, cold as a Swede, told him that Barça players didn’t drive flash cars. But Rosengård boys, Zlatan argued, absolutely do. Once again, just as in his immigrant childhood, he felt like an outsider.
Messi showed himself to be more egotistical than he is usually portrayed: annoyed that Zlatan was playing in his favourite central position, he arranged for the Swede to be moved to a more marginal role. Soon Zlatan clashed with Guardiola. Zlatan threatened violence. Guardiola stopped talking to him. Zlatan called him “an idiot” and, worse, “a philosopher”. After a year he left Barça.
The book has a happy end. Zlatan bought the posh pink house in Malmö that he had fantasised about as a teenager. On the wall he has hung a photograph of his dirty feet – the feet that paid for everything. But this is more than simply a financial triumph. The boy from the ghetto has not merely become a great footballer: he has become a Swede, captain of the national team, married to a beautiful posh blonde, accepted by the quiet, polite, blond people. I Am Zlatan is a modern European fairy tale.
Simon Kuper’s books include “Ajax, the Dutch, the War” (Avalon, £10.99)