Welcome to the second instalment of the New Statesman‘s 12 Days of Blog-mas. (Yesterday’s round up of foreign reporting, is here.)

Today we’re looking back at incredible year for sport, dominated by the highs of the London Olympics – but also host to the low of Lance Armstrong’s disgrace. Here are a selection of the best pieces – click the headlines to open them in a new window.

This year, cricketer-turned-author Ed Smith joined the NS as a columnist, writing the weekly “Left Field” page at the back of the magazine. Ed brought a unique perspective to top-level sport, having played for England himself. Here, he writes about what it is like to play against Shane Warne:

Facing Shane Warne was only incidentally about cricket. Sport was the medium but the substance was drama. He turned cricket into a show and appointed himself the leading man. It went deeper: he projected an aura of certainty that he was also writing the scripts. He united three forms of psychological dominance: one part circus master, one part chess wizard, one part Hollywood star. That left you, the batsman, to choose between being a clown, a pawn or a walk-on part. Many – most – acquiesced.

The Olympics changed what it means to be a winner

These Games have shown how the image of “a sporting champion” has changed. Twenty-five years ago, in line with the worst strands of Thatcherism, the image of being a winner was aggressive individualism. It was assumed that John McEnroe-style outbursts would become the norm, because “nice guys finish last”. Not so long ago, a leading sportswriter chastised Colin Jackson for congratulating his friend and rival Mark McCoy for winning a gold medal.

That is absurd. These Games have proved that sportsmen do not gain any competitive advantage by losing their dignity or forgetting their friendships. Usain Bolt talks about Yohan Blake, his fellow Jamaican who won a silver medal behind Bolt in the 100 metres, like a younger brother, thanking him for pushing him hard. Farah was thrilled that his training partner, the American Galen Rupp, won silver. As we have learned from the rivalry of Roger Federer and Rafael Nadal, the greatest rivalries are underpinned by respect.

Plus, Ralph Steadman drew us this cartoon of Danny Boyle: 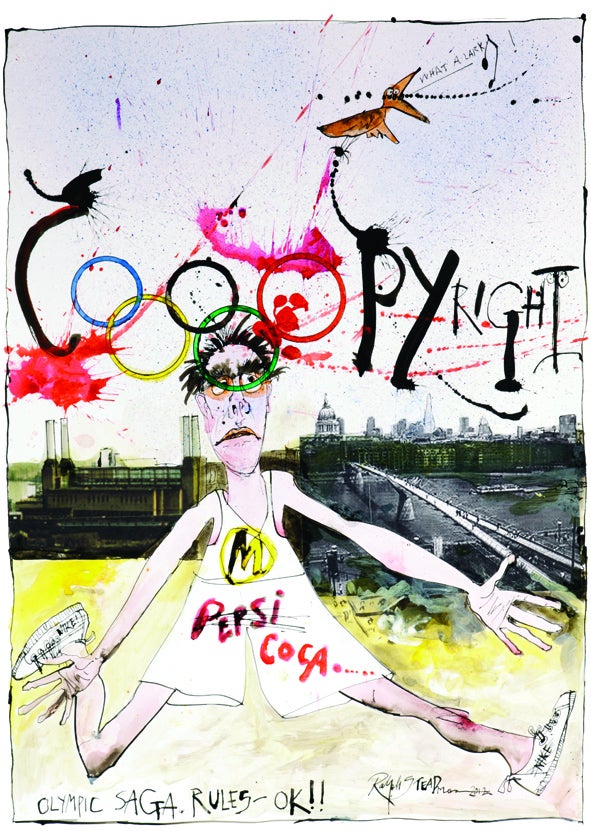 Roger Federer: Why must our sporting idols be nice?

Not everyone was on board with the new collaborative spirit. In a piece which angered a thousands fanboys, Cameron Sharpe asked whether putting Federer on a pedestal was constraining him.

Closer to home, the freedom afforded football figures like Ashley Cole, Wayne Rooney and Luis Suarez after being written off as morally bankrupt at various stages of their careers, has actually been beneficial. After all, it is hard enough being a world class sportsman without having to be everyone’s favourite personality too.

After many years of denials, Lance Armstrong this year gave up trying to contest doping charges against him. The Secret Race, by Tyler Hamilton (reviewed here by Gary Imlach) may have helped changed his mind. As Imlach writes, the fellow cyclist recounts:

Hunter Davies: My TV is possessed by silly possession stats

Davies writes “The Fan”, a backpages column devoted to the joys and tribulations of following football. In one of his funniest columns of the year, he fixes his telly – only to find he can now see the possession statistics – the most useless of all sporting numbers.

England 90 per cent possession, San Marino 10 per cent – yet the half time score is 0-0. How can that be, if England have dominated? Because they are useless bastards. Our tortoise could lead the line better. (I have just made that stat up. As I write, that game hasn’t happened, but I bet it will be roughly that.)

His bizarre new memoir, Tout seul (“all alone”), is his attempt to explain how things got so bad. It’s unlike any other football memoir, often unintentionally hilarious and filled with character assassinations of almost every major French player of his era, from Anelka to Zinedine Zidane.

Domenech claims he could only have written it with two years’ distance; one hardly dares imagine what he would have written in the heat of the moment. It’s a story of modern France and modern football. Above all, it works as a business book in reverse: a study in how not to manage people.

Here on the website, NS blogger Juliet Jacques looked at another largely unspoken issue in football: depression. Her interview with Darren Eadie was insightful and poignant:

“I’m not looking for sympathy, but there’s this media-led perception that footballers are all egotistical meatheads,” says Eadie. “There are some bad eggs, but we’re mostly down to earth people who care about our families.” He hopes that the retreat, which will allow people to keep “one foot in football, and one outside” will help loved ones to cope as much as the players themselves – and that it can be the start of a significant cultural change.

Finally, here is football approached from two other unusual angles: a contemplation of the impact Jewish players have had on the game and a blog on the rise and fall of the great British football comic.