About this time last year, Zoella blocked me on Twitter. Zoe Sugg, to use her real name, had released an advent calendar that included only 12 days and cost £50. I don’t remember my words exactly, but I basically called her a charlatan for selling her beloved fans and viewers, many of whom are teen girls, an overpriced product.

My argument was that the relationship between YouTuber and viewer was an unbalanced one. Zoella, in particular, sells a sort of “friendship” with her fanbase, then relies on this connection to sell her merchandise. I guess she did not appreciate this argument, because she blocked me.

Sometimes I think about The Blocking when I think about YouTube culture more generally. Overall, it’s not been a great year for YouTubers. Zoe’s boyfriend Alfie Deyes was called out for taking part in a challenge where he lived on £1 a day. He was accused of poverty tourism as during the video he insisted things like his gym membership and petrol didn’t count in the £1 allowance. Back at the beginning of the year, American YouTuber Logan Paul was criticised for uploading a video from Japan’s “suicide forest”, along with footage of an actual dead person.

I find the existence of the vlogger a weird one. As an avid Twitter user, I understand the obsession and enjoyment that comes from having an audience, sharing your thoughts and putting yourself out in the world. Where I come unstuck is when your personhood becomes A Brand, and your audience your livelihood; immediately the relationship is unbalanced. You’re no longer peers: there is an expectation on you, from the perspective of the fan, to deliver content, remain genuine and share your life. The vlogger has an expectation of fans, too, to, well, watch their stuff and buy their merchandise. When cash becomes involved, whether through ad revenue or merchandise or selling tickets to meet and greets, you’ve crossed the line from friendship to fan forever.

Why the steepest slopes often yield the best wines

Delia Smith: “I was told I was not sexy enough. It was very hurtful”

In October Zoella released her first non-fiction book, Cordially Invited. It’s a hardback, lifestyle book that advises readers on how to host delightful parties, bake nice treats, cook food and generally live splendidly. I decided to get myself a copy (I tried to get one from the publishers, but my emails went unanswered; I’m sure it’s not a conspiracy), so as to see what the woman behind the videos and the brand was really like. What it would feel like to try and live the Zoe life? 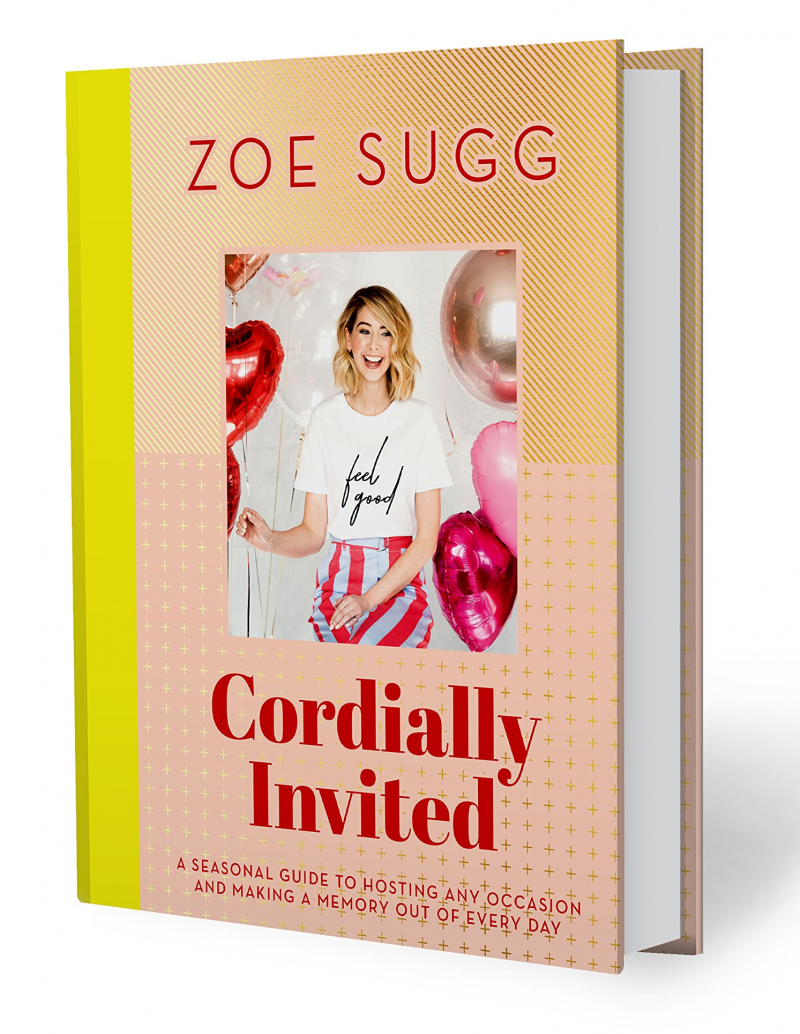 The first thing I notice about the book is that Zoella, The Brand, is not there: it’s all about Zoe Sugg. There are of course references to her blogs, Pinterest and videos; but the girlish framing of Zoella is gone.

It must be hard, I feel, to have built yourself a brand as a young woman and then try to live and grow through it. I am certainly not the person I was when I was 19. Now imagine that your youthful internet brand has become a global phenomenon, not to mention your income, and you’re trying to grow up while retaining the following and persona that you’ve built yourself.

You can see this problem throughout the book and, for me, it’s one of its downfalls. I know who Zoe’s audience is – young teens to young adult women; but I can’t tell who Cordially Invited is for. The advice on offer ranges from “making a Christmas playlist” at Christmas time, to having fresh sheets available for guests staying over, along with a guest room tray including phone chargers, a Lavender-scented sleep mist and a fresh towel and flannel. But how many teens and young adult women have spare bedrooms to adorn with mist sprays and spare phone chargers?

Other tips include things like having an array of tableware in different patterns to mix things up at dinner parties. I share a flat with my boyfriend and a friend. Our kitchen is very small. We don’t have the space for an array of patterned tableware.

The book is full of wonderful, gorgeous imagery, of the sort that you can see on her Instagram (she hasn’t blocked me there, yet): the kind that make you judge your own lifestyle and think you’re not a proper grown-up because you don’t have sets of matching dinner plates and bowls. There are lovely pictures of Zoe with her friends, decorating her house for these endless parties she hosts. Across two pages are the instructions for making “birthday party paper chains”, labelled “low effort” by Zoe. I gave them a go and they were indeed low effort: mine looked rubbish, sellotape all over the shop and stayed on the wall for all of 15 seconds before falling off. (I live in a rented flat; putting sellotape on the walls, as Zoe suggests is likely a no-no.) I also tried one of her recipes, the Chilli Beef Nachos. They, again, were simple and tasty. But I felt slightly cheated by being told to pick up a tomato salsa from the shelf at the shops.

There are other tips and tricks that left me slightly bemused, as a 25-year-old woman who has lived this long without jabbing a fork into a toaster and accidentally killing myself. On a double-page spread entitled “Bluebell Walk”, Zoe suggests taking an umbrella. For throwing a garden party, she suggests hiring a gazebo or bell tent as a plan B in case it rains and you can’t fit everyone inside your house. She reminds anyone who wants to hold a Firework Night party that they’ll need a big space in their garden to set off the fireworks. On her spring to-do list she reminds readers to “treat themselves to an Easter Egg”. Thanks Zoe. That usually slips under my Easter radar.

I also checked out the Amazon reviews of her book, to see what other people thought, and was met with many of the same opinions I had. At the time of writing, 39 per cent of the reviews give her five stars, but 54 per cent gave her just one star. It’s listed on the site as a best seller, even though more than half the reviewers gave it bottom marks.

Those one-star reviewers left comments such as, “This book is the definition of over-hyped publicity, wow” and “This entire book is the embodiment of when you need to reach the word count on your essay”. Many other one-star reviewers also comment that most of the content in the book is already available – for free – on her various social media offerings.

That said, the five-star reviews are oddly heart-warming. “I purchased this for my daughter’s 14th birthday and she was really happy to receive it as a gift. Any book that encourages teenagers to read deserves 5 stars in my opinion!” “Absolutely loving it!! The perfect way to teach yourself to enjoy each day as well as each season!”

The one thing I didn’t expect when reading was to feel a slight affinity to Zoe. I, too, suffer from anxiety. I, too, prefer quiet events at home rather than going out to clubs or festivals. I like feeling cosy, and making my surroundings as nice as I can on a budget. From reading the book she seems like someone with whom I could see myself being friends. (In her list of autumn films she even includes my favourites, When Harry Met Sally/You’ve Got Mail/Sleepless in Seattle.)

And in that respect, if Zoe is meant to be a friend to her fans, why would she sell them this book? A book which, if you took away the pictures and frivolity, would be about 30-pages long, and would tell you how to make a presumably okay-tasting hummus sandwich? And which also cost me £16? That’s probably my fault for not shopping around, but £16 is a lot of money to be told to get an Easter Egg at Easter.

Why is Zoe charging her “friends” so much for this book? The answer, I think is simple. If she truly meant to be your friend, she wouldn’t.

Cordially Invited: A seasonal guide to celebrations and hosting, is available now from Hodder & Stoughton.