Today is the fourth Thursday in November, which means that people across America are waking up to a raw turkey waiting to be roasted in their refrigerator, on the annual holiday that is Thanksgiving. While you, a British person, or perhaps a European, may be aware that Thanksgiving is happening, you may also be thinking to yourself, “What the hell actually is this holiday?”

I, a certified American and Ohioan, am here to help. Below are the answers to all of your big Thanksgiving questions and explanation for why, actually, this weird American holiday is, in fact, quite good.

There is a simple, sensual pleasure in eating with your hands

Why does everyone love coronation chicken?

The reality of the first Thanksgiving, though, is far from this cookie-cutter tale. Although there are records of a harvest meal in 1621, there is a) no evidence there was any turkey b) no evidence that the Native Americans were actually there, or even invited, and c) well-documented evidence that the Pilgrims did go on to slaughter the hell out of the Native Americans around Plymouth almost immediately after. If you really want to get into it, you can read this longer account of what actually happened on Thanksgiving here. 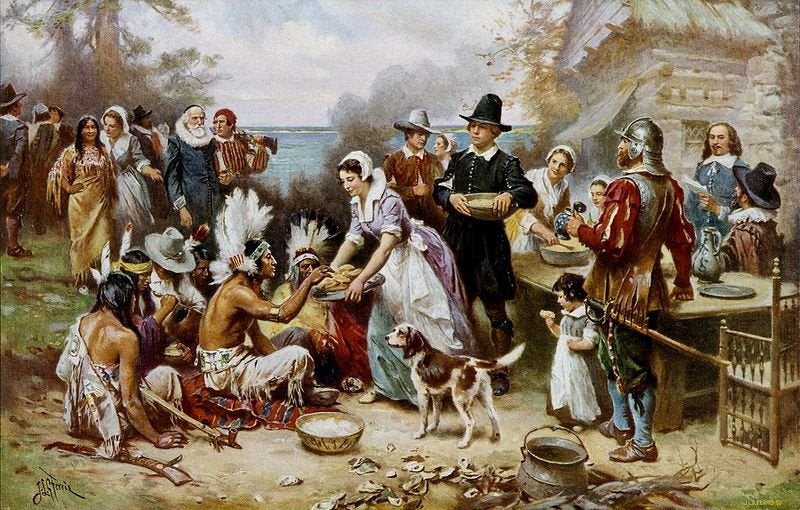 It only became a national holiday under Abraham Lincoln, more than two hundred years later, but is now celebrated every year with three days of bank holidays in a row and an unholy amount of eating – all in the name of “breaking bread and giving thanks” like the Pilgrims and Natives did (which is where its incredibly literal and unimaginative name comes from).

What do the Native Americans think of Thanksgiving?

Native Americans, it will shock you to hear, do not view this holiday so positively! Tens of thousands of Native Americans were murdered by the Pilgrims in the years following the first Thanksgiving, and the English settlers effectively carried out a genocide for centuries after, to the point where Native American heritage, people, and culture have been almost entirely decimated. Native Americans do mark Thanksgiving in certain tribes, but only as a day of sombre remembrance, such as Remembrance Day in the UK. “This is a time that is a funeral for a lot of us,” Mexica tribe leader, April Bello, told Mic this year. And while you may think that Americans would be up in arms over the atrocities against Native Americans around Thanksgiving, it is a largely unacknowledged piece of history every year.

And that leads us to: What is this Thanksgiving about?

Look, British people love to have layers upon layers of weird, boring, religious lore added to every holiday in the calendar. Nearly all of your holidays have some Christian significance, a million historical, dreadful oil paintings to honour it – not to mention a saint, which you guys seem to try to stick onto everything and anything you can. Thanksgiving is not like this: it is literally just a simple day where you are meant to reflect on what you appreciate in your life and spend time with people you are at least supposed to love. It has no religious element (at least, not technically), is celebrated by all Americans regardless of background, and doesn’t really have a commercial element (other than bragging about how expensive your turkey was). It’s genuinely a pretty nice holiday in theory, and is merely centred around gratitude, thankfulness, and eating.

What happens on Thanksgiving?

If you’re not cooking, Thanksgiving is a pretty sweet set-up. Traditionally, families will gather at one house in the early afternoon, eat light snacks and starve themselves until 4 or 5pm, then eat a million-course meal that makes everyone uncomfortably full and sleepy and sit around until the evening when everyone goes home to pass out.

However, if you are cooking, which typically falls on one to three people who will be responsible for feeding often upwards of 15 people, Thanksgiving is a living nightmare. Picture a traditional British Christmas dinner, but often double or triple the food load. Preparation starts days before and properly kicks off on Thanksgiving Day in the early hours of the morning. Traditionally, from around midday, fussy children (and adult men) ask incessantly what time the food will be ready (to which the answer is always: in many, many hours). This is followed by a manic rush to get a spread – that, let’s remember, could feed a village – all out at the exact same time, mostly likely using one oven and four hobs.

There’s a parade in New York that gets broadcasted on national television – in which enormous floats and inflatable cartoon characters get dragged down the street by thousands of tired, presumably strong people – and for some reason a bunch of American football games happen, so most people watch that throughout the day. Some people watch Christmas movies too, as Thanksgiving is often considered the starting gun for Christmas festivities to kick off.

What do you eat?

From the delicious to the disgusting, a Thanksgiving meal features: turkey, mashed potatoes, stuffing, gravy, cranberry sauce, pumpkin pie, apple pie, blueberry pie, pecan pie (look, it’s a lot of pies), roast potatoes, bread, brussel sprouts, butternut squash, acorn squash, anything with Velveeta cheese, salad, potato salad (it’s a lot of potatoes), and the unholy sweet potatoes with marshmallow topping (please don’t ask me to explain this, my family never ate it and it makes me feel ill too). To be fair, it’s all pretty good aside from that.

Why do you guys eat pumpkin pie?

Jesus Christ, how is this so hard for this entire nation to wrap their heads around? Pumpkin pie is an incredibly smooth, silky sweet dessert that is insanely delicious despite being, as one colleague put it to me, a blended root vegetable. It’s far better than raisins in pastry, or a brandy-soaked blazing cake, so why don’t we all just keep our pudding judgements to ourselves this year, yeah?

Who do you celebrate Thanksgiving with?

The prevalence of Friendsgiving has increased over the last several years – spending Thanksgiving with friends or having a meal with friends in addition to normal Thanksgiving – but Thanksgiving is usually celebrated with your extended family. This, of course, is either a fun tradition or a live Russian roulette depending on who your family is and whether or not they own a MAGA hat. Thanksgiving has almost always had the connotation of being the annual (political) Battle Royale for families, where people get to deal with drunk uncles complaining about female sport commentators and racist aunts describing people of colour in their workplaces as “urban”. And beyond politics, Thanksgiving is just the time where you have to deal with distant family members you’d rather not see, whether that’s strange cousins, people you haven’t seen since you were six, or your recently divorced uncle’s new girlfriend. While this isn’t all families, this is Thanksgiving for a lot of families.

The downside: it created Black Friday

I mean, really, you could say the American capitalist machine is what created Black Friday, but ultimately its existence is entirely based on when Thanksgiving comes to an end. Black Friday, in case you aren’t aware, is a one day hell-fest in which nearly every store in America drastically slashes their prices to kick off the Christmas shopping season. As though all Americans, after being forced to sit through the one non-commercial holiday of the year, are exploding with materialistic urges and the need to squeal “SALES!”. Thanksgiving is bookended by this dreadful day that is now considered a holiday in its own right. People queue for hours (and sometimes days) just to get the Christmas gifts they want for a fraction of the price, and people literally die almost every year from the stampedes when store doors finally open.

Lastly – what the hell is a “turkey pardoning”? 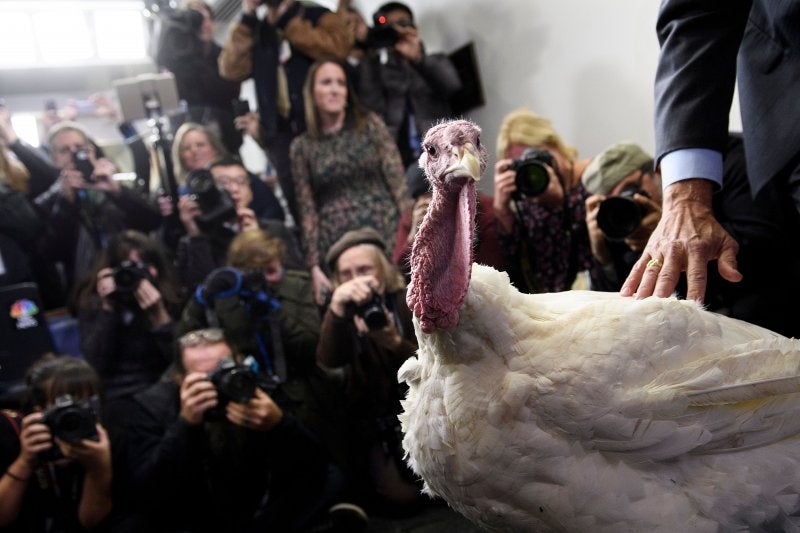 One of the weirder Thanksgiving traditions is that, since the mid-eighties, US presidents have ceremonially “pardoned” a living turkey theoretically headed for a brutal death. Under Barack Obama, it was a fun and cute press conference, where he made some intentionally bad dad jokes that embarrassed his daughters. Under the new administration, it has become slightly less jovial, far more morbid necessary evil for many parts of the country, watching Donald Trump gloat about saving a farm bird and screaming forced jokes in its face. Ultimately, though, it’s a grim reminder masquerading as a charming tradition that turkeys are cruelly killed, fattened, and mistreated all in the name of having a big flavoursome bird to placate your hungry family members one day of the year.

And there you have it. If you think I’ve not answered your questions, please tweet them to me, @sarahmanavis, where I can respond at any (well, most) hour of the day. Happy Thanksgiving!