Richard Linklater’s Dazed and Confused looked back on one day in summer 1976 with an affection that was not uncritical. His new film, Everybody Wants Some!!, is set over one long weekend in August 1980, and applies the same faintly anthropological approach to college life that the earlier film did to high school. Jake (Blake Jenner), an easygoing, shaggy-haired freshman, arrives at the house he is to be sharing with fellow baseball players and finds that the ceiling is buckling and the floorboards could give way at any moment. It’s a tumbledown, three-bedroom metaphor.

One strutting, moustachioed housemate, McReynolds (Tyler Hoechlin), gives Jake a hard time. But in such a large social group, everyone gets a turn at being top dog and runt of the litter. Beuter (Will Brittain), ridiculed as a hayseed, grabs some power back by refusing to surrender the bedroom so that Jake can reach fourth base with a date. The gormless Brumley (Tanner Kalina), mocked for his cornball catchphrases (“Full throttle to the bottle!”), can triumph in a knuckle-flicking tournament. Status goes down as well as up. McReynolds forfeits his dignity when he throws a tantrum after being thrashed at ping-pong. He doesn’t like losing. “None of us do,” a spectator sighs.

Violence disguised as tomfoolery kept bubbling to the surface in Dazed and Confused. Though the volatility is somehow not as serious in the new film (a brawl breaks out over a slice of lime), the atmosphere is also less carefree. These are men, not boys, and they resort to aggression with alarming ease. The film dresses up their antics as larks but all is not well in the House of Macho.

Anxieties about identity inform their conversation. What must it be like, they wonder, to not be them – to not have baseball? “Imagine being just . . . some dude,” says one, gazing into the abyss. They stare at the punky Justin (Michael Monsour), who is as skinny as a stick of dynamite and all hopped up like a jumpin’ Jack Black, as though he just stepped out of a UFO. But they are scarcely at ease in their own skins. They visit a disco, a country ’n’ western club and a punk dive in a single weekend. “It begs the question: do we know who we are?” says Jake, never slow to underline any points the film is making. 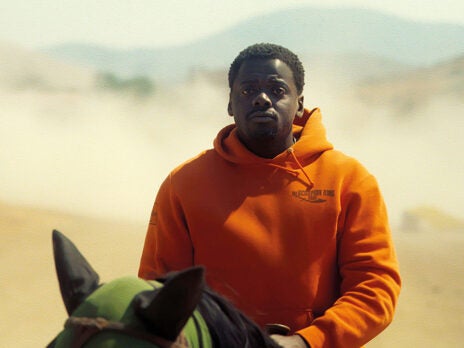 One stoner mentions an episode of The Twilight Zone in which a woman undergoes cosmetic surgery to make herself beautiful, only to discover that everyone else was ugly all along. This becomes advice for the baseball field: “Bring who you are. Never what they want.” Linklater’s award-winning Boyhood, which spanned 12 years and took as long to make, felt expansive enough to earn those sorts of statements. But the focus in Everybody Wants Some!! is so narrow that it’s plainly incongruous to find this many philosophers on one baseball team.

In among the slogans are a few bitter truths. Beverly (Zoey Deutch) observes that all the high-achievers from school are surrounded at college by students who are as good as or better than them. No wonder some people, both here and in Dazed and Confused, hang around campus long after they should have moved on. Those big fish are in no rush to leave the small pond.

It’s nice that Beverly gets to deliver that observation, as she is the only woman who is allowed to say anything much at all. The film’s subject is masculinity and there is no obligation for it to be balanced. Excluding women, though, can only make its world-view impoverished. Even Larry Clark, no great friend of the female, found room for the girls’ side of the story in his boy-heavy Kids.

Linklater is too besotted with his male creations to see that they can be divided almost without exception between the bland and the obnoxious. Even his usual eye for detail is a little off. Many of the visual gags fall flat, such as the post-practice ritual of fastening the pitchers horizontally to the fence with duct tape and pelting them with baseballs. And although I dearly want it to be the case that an African-American student could dance with a white woman at a ­country ’n’ western club in Texas in 1980 without attracting even a disapproving glance, I’m not convinced it is.

This article appears in the 11 May 2016 issue of the New Statesman, The anti-Trump