“I know that creaking noise sounds like we have a ghost,” Sarah Perry says, leading me into her living room, “but it’s actually my husband stripping Anaglypta from the walls. We don’t have a ghost, which I think is very unfair.”

I’ve come to interview 38-year-old Perry, the Essex-born novelist who found herself in the literary limelight when her second novel, The Essex Serpent, became a No 1 bestseller. She lives in a terraced house in Norwich with her husband of 18 years, Robert Perry, a former police officer, and their pets: cat Margery Kempe (named after the medieval mystic “because she’s white and from Norwich”) and whippet Janey Morris (named after the Pre-Raphaelite embroiderer, muse and wife of William Morris). “Don’t buy her tragic heroine look,” Perry whispers. “She’s the most spoiled dog in the world.”

The house is eccentric and comforting, full of brightly painted walls (royal blue, turquoise, pale mint), rows upon rows of books, open fireplaces and hardwood floors covered in paisley rugs. Strange objects sit on the mantelpieces: a gold, coiled serpent that holds a candle, a nuclear Sylvanian Family of four white cats (an anniversary gift from Rob, chosen for their resemblance to Margery). “I’m still, and have always been, a bit of an object fetishist,” Perry says. And while there may not be a ghost, there are a few trinkets dotted around that feel distinctly eerie: framed paintings of an empty Edwardian nightgown and a solemn child in a ruff holding an apple, a model jackdaw named Hoffman, and a very old edition of Charles Maturin’s Melmoth the Wanderer, the 19th-century gothic novel that inspired her new, haunting book, Melmoth.

Perry came across Maturin’s Melmoth seven years ago while doing her PhD at Royal Holloway, University of London, when her supervisor, the poet Andrew Motion, encouraged her to read it. “It is the most horrific book I have ever read,” she tells me with a kind of glee. “It’s so horrific that there are parts where I actually put my hand over the page, because I couldn’t bear to look.” Halfway through reading this story, which follows Melmoth, a terrifying figure doomed by God to walk the earth searching for fellow souls to damn, she felt a desire to write a modern version – with a female Melmoth stalking a contemporary world.

Perry’s Melmoth, which is set mostly in modern-day Prague, is a strange, dark work that follows a guilt-ridden woman named Helen Franklin as she discovers the Melmoth myth: a legend concerning a mysterious woman with black hair and steely blue eyes who appears to people at their lowest and most shameful moments, tempting them to go with her into the gloom. Helen devours manuscripts and letters written by those who claim to have seen the woman, until she, too, begins to see skirts rustling in the corner of her eye, or perhaps catches a glimpse of a dark-haired woman looking down at her from a window.

“All my life I’ve wanted to write a great villain, but a woman. I remember being really outraged, even from the age of 12, that the titular monsters and heroes – Dracula, Richard III – were always men.” Fans of The Essex Serpent, a warmer take on gothic with a loving, unconventional friendship at its heart, might be surprised by this turn into the shadows. Or, in Perry’s own words, they might find that “the woman who wrote The Essex Serpent is dead”.

In the spring of 2016, just as The Essex Serpent was being published, Perry was diagnosed with Graves’ disease, an autoimmune condition that leads to hyperthyroidism. She ruptured a disc in her spine, twice, and underwent serious spinal surgery. During this ordeal, she sustained a third-degree burn when a hot-water bottle burst as she slept. The burn had to be left to heal naturally, as the surgery prevented her from having a skin graft. For 18 months, she was in constant pain.

Now, she doubts that she could write a book like her second novel again. “Before I wrote The Essex Serpent I’d never been ill,” she tells me, curled up with Janey Morris on a blue velvet sofa. “I was never sick. I had never suffered. And the world was a slightly bonnier place in 2012. I was young. I felt very optimistic, very healthy. Then I became ill and suffered a lot of pain, and around about the time of suffering pain, the world began obviously to trend toward entropy in a way it hadn’t done quite so visibly before. I lost a lot of my faith in democracy and humans, generally.” She briefly considered stopping writing altogether. “The day before The Essex Serpent was launched was the massacre at the Orlando nightclub, and round about that time Isis was all over the news beheading people in orange suits, in those terrible photos, and the Syrian refugee crisis was really just beginning to bite. Writing a novel felt self-indulgent and actually immoral.”

She describes herself as being “high” on pain medication for most of the time while writing Melmoth, and finds parts of the process difficult to remember. “It’s a strange, hazy period, and I think it shows in the book that I was suffering. The fact it has ended up being a supernatural horror novel is probably partly because I was given a kind of liberty by the state that I was in. The state of extreme pain, the euphoria that you’re not in pain any more, and the state of being drugged are all really similar, because they’re all at a remove from reality.”

All that time spent alone, writing stories of cursed beings and guilty souls in an altered state, had its dark moments. Perry recalls a night before surgery, between the two ruptured discs, when she woke with a start and saw Melmoth sitting on a dining chair in the corner of her bedroom. When a bedside lamp revealed the figure to be a collection of clothes draped over the chair, for Perry, “It didn’t matter. It was Melmoth.”

A few months later, she opened her eyes and saw a schoolgirl standing in the room. “She had a white dress, and frilled white socks, and dark hair in plaits, and she was looking down at me.” She knows, rationally, that there was no one there and yet “there was absolutely a schoolgirl in my room”. It was a long time later that she realised the girl bore more than a vague resemblance to one of Melmoth’s characters. “Was I dreaming? I don’t know. I’ve never had that very concrete waking dream before.” 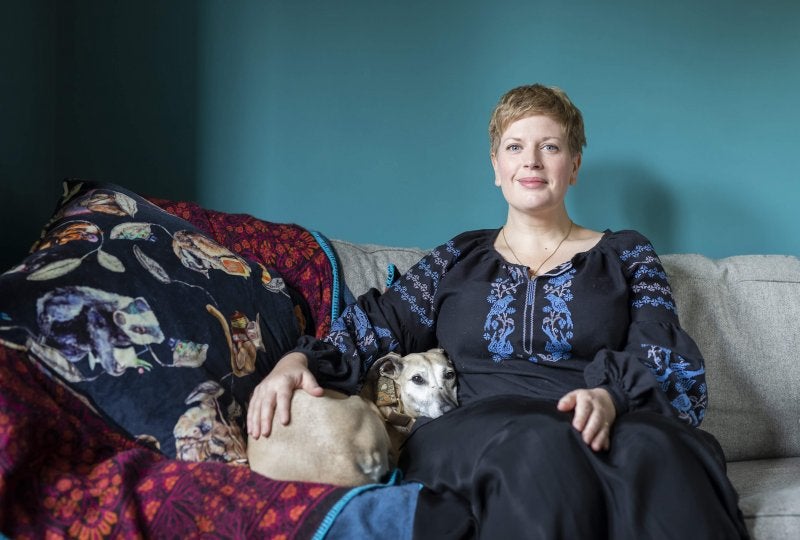 Sarah Perry with her whippet Janey Morris, named after the Pre-Raphaelite embroiderer. Photo: Fabio De Paola for the New Statesman

Born in Chelmsford in 1979, Perry is the youngest of five girls – her eldest sister, Ruth, is 13 years her senior; the others, Nicola, Lydia and Rebecca, had left home by the time she was 11. (If this sounds like Pride & Prejudice, Perry insists that she is the Mary Bennett: “I was playing Bach and doing embroidery.”) She was raised in a strict Baptist household, which she describes as “odd”, “stern” and regulated, with “lots of rules”.

She had no TV and knew very little about popular culture. “I never had boyfriends and gigs and clubs and all the rest of it: even saying the words feels slightly funny coming from me,” she explains. She socialised mainly by going to church: which is how she got to know her husband, Rob. “At the church I went to, the men almost all had beards, because they believed that it was godly to have a beard. I can’t remember how they backed that up. They all wore dark suits and it was a really big thing that you always wore a tie to church. And then, when I was about 16, someone arrived late and it was Rob, with his parents. I turned round and there was this really handsome young man, wearing a purple shirt – with no tie. It’s really hard to explain what that was like, just the idea that someone would do that. It seemed so reckless and so full of joy.” His first gift to her was a CD of Eighties music.

Writing Melmoth was in some ways a return to the feelings of Perry’s childhood. “We very much would never have believed in ghosts or anything like that. But demons, and the devil, and a solid concrete wickedness: they were all real.” Melmoth knows every dark deed the other characters have ever committed, and tempts them to go with her by playing on their sense of guilt and shame. “You see what you did?” she says to them. “Who would want you now…? What might they say, if they all knew?”

“The idea that you’re watched by a consciousness that knows everything you’ve done that you’re ashamed of, that’s there right from the beginning. When I was a child, really small infractions of school or household rules felt like vast sins. It wasn’t just being a little bit disorganised, it was: You’re a sinner.”

Perry had some very happy moments in the writing of Melmoth too. In January and February 2016, she was the Unesco City of Literature writer in residence in Prague, gathering material for the novel. “I spent two months not writing, but walking, walking, walking round, going to the opera, tracking Melmoth through Prague.” Prague has held a fascination for Perry since she was a girl, playing the piano part to “Vltava” from the Czech composer Bedrich Smetana’s Má Vlast (“My Country”) in the school orchestra. “I stole it, because I loved it so much I refused to give it back.” They housed her in a flat on the Vltava river next to the opera house, she tells me, grinning.

“On the night I arrived, I drank a couple of glasses of wine and leant out the window, smoking and playing the Vltava, watching swans fly up the actual Vltava. I thought of the 14-year-old girl in her school blazer who’d never travelled, playing that music and wondering what Bohemia was like. I wanted to go back in time and just whisper in her ear and say, ‘It’s all right. Just bide your time. You’ll get there.’”

Perry is thinking of that girl more than ever these days. While the literary world is just getting started on Melmoth, she is “two books ahead”, deep in her next projects, neither of which will be in a gothic mode: “There’s so much of it around now, and when you’ve spent your whole life as an outsider, it’s really disconcerting to wake up and suddenly find yourself part of a trend.” Perry – who spent five years working for the Council of the Inns of Court, was for some time a legal journalist, was once a foreman in a jury and is married to an ex-policeman – is working on “a big legal novel”. The research process will be intense: “I’ll probably train as a magistrate, just for the material.”

She is also working on a book about the upbringing that made her the unusual person she is. “I am writing about my childhood for the first time,” she tells me. “It’s very difficult to place people deeply enough in what it was like for them to understand.

“I need to do something to make myself an outsider again,” she says cheerfully. “It’s where I’m most comfortable.”

“Melmoth” is published by Serpent’s Tail. Sarah Perry is in conversation with Sarah Moss at the Cambridge Literary Festival, in association with the NS, on 25 November

This article appears in the 03 Oct 2018 issue of the New Statesman, The fury of the Far Right