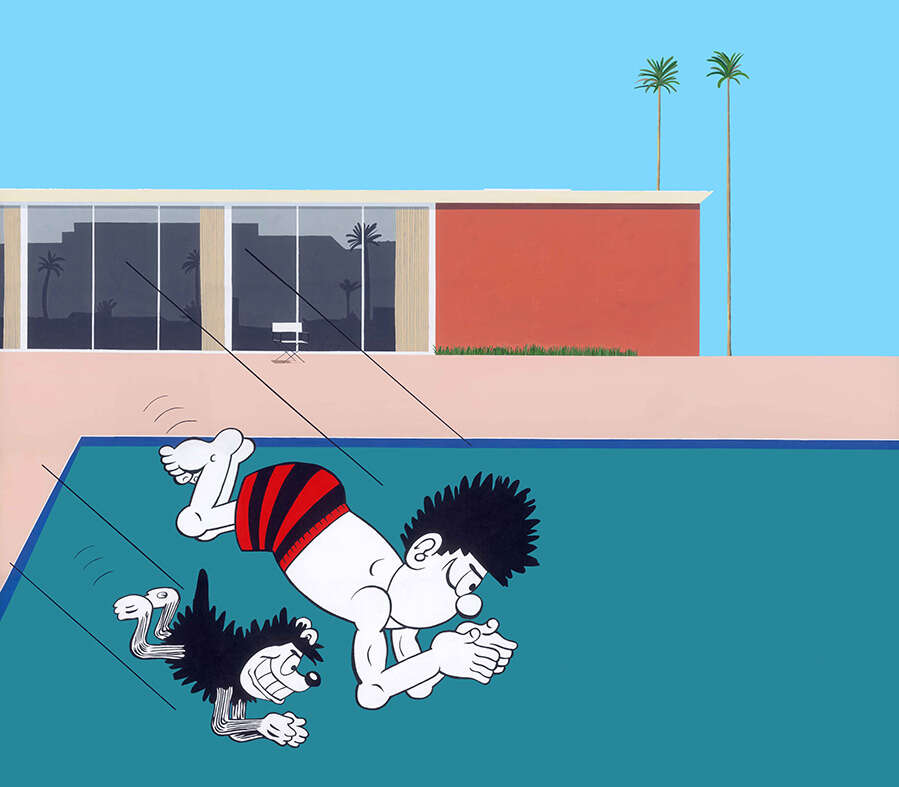 “Know the rules well, so that you can break them effectively.” “The only rule is there are no rules.” Which of these comic-book speech balloons said it best? The first comes, according to popular opinion, from the 14th Dalai Lama; the second from his equal in radical thought and the praxis of freedom, but perhaps his superior in feminist-situationist action, Minnie the Minx.

These and lines from other towering thinkers (Debussy, GK Chesterton, Dennis the Menace) hover on the wall at the entrance to “Beano: The Art of Breaking the Rules”, the dazzling exhibition now showing at Somerset House in London, exploring the 4,000-plus issue history of the children’s comic, first published in the summer of 1938. Though much has changed in the 83 years since, the exhibition proves that the magazine’s gleefully anarchic spirit remains undimmed.

Being the best of Britain – unruly, anti-authority, a vivid cartoonification of what we can still just about call working-class lives – and much more contemporary than your average columnist thinks, the Beano is naturally under attack for being “woke”. Dennis lost his “Menace” suffix in 2017, no longer bashes Walter for being a softy, and is now “a flawed hero, a ten-year-old boy who fears nothing and sometimes gets into trouble as a result”. He even has two female friends, Rubi, a wheelchair user, and JJ, a black girl who plays drums.

This year, the comic renamed big-boned Bash Street Kid Fatty as Freddie, leading the Daily Mail and Express to run grindingly predictable wails about “Woke Street Kids”. They seem not to have checked with any actual children or Beano readers, who now tend to take a dimmer view of bullying others for being fat, skinny, odd, ugly or a different colour than their grandparents did. The underlying complaint – you may notice a pattern here – is “why can’t things stay the way they were?”

“These critics who haven’t read the Beano in decades, complaining that it shouldn’t change because it’s supposedly timeless – they’re completely misinformed,” said Colin Smith, a renowned comics blogger. “The Beano has survived because it’s constantly reinvented itself over decades.” He explains to me how the comic prospered on a “radical, modern form of storytelling” when it arrived in the 1930s – dynamic, kinetic art with word balloons instead of fusty Rupert the Bear-style text at the bottom of pictures – and on unacknowledged social commentary. “Lord Snooty isn’t this aloof figure at all. The point is, he jumps over the garden wall to hang out with his mates who are absolutely, horribly poor. He’s happy mocking his fellow rich people.”

During the Second World War, the Beano adapted by taking on a propaganda role, mocking the Germans in terms we’d now find uncomfortable but essentially showing kids that they needn’t fear these ludicrous Nazis. By the 1950s and 1960s it evolved again, foregrounding trademark troublesome kids like Minnie and Dennis, embodying a new concept: wild youth. “It’s about a generation of kids emerging from the war and discovering themselves,” said Smith. “Pete Townshend wasn’t surprised that his parents hated rock ’n’ roll. All they wanted was silence, an ordered world. In Dennis, Minnie, Smiffy, Plug and all these unruly kids you get the idea the adults just don’t understand what fun is. But the Beano does.”

“The Art Of Breaking The Rules” is far and away the greatest and most joyous comics exhibition that I – a lifelong comics addict who was at one point spending more on them each month than I did on my mortgage – have ever attended. Curated by comics artist Andy Holden, it combines original hand-drawn pages from the beloved weekly’s history with contemporary, Beano-inspired artworks from modern figures including Phyllida Barlow, Sarah Lucas, Trafalgar Square fourth plinth artist Heather Phillipson, and pop artists including Horace Panter of the Specials and the late Chris Sievey aka Frank Sidebottom. It is a walk-through fantasia, a primary coloured dreamland of the shared British unconscious.

And it’s no de haut en bas affair with “proper” art somehow ennobling the grubby populist stuff either. Quite the opposite, in fact. Here the Beano’s lineage of everyday rebellion and its decades of matchless talent – artists like Lord Snooty’s Dudley D Watkins, champion of grotesques Ken Reid, and the Hogarth of the schoolyard, Leo “Bash Street Kids” Baxendale, all daydreaming as hard as they could to satisfy the chaos-lust of the most demanding readers on earth – stand revealed as the cultural wellspring from which our art draws if it is smart enough.

Best of all, it is not merely kid-friendly, it is 100% kid-first. Yes, there is more than enough here to entertain the adults who insist on getting under their children’s feet, including a copy of Beano editor Mike Stirling’s cease and desist letter to Jacob Rees-Mogg for his impersonation of Dennis’s arch-enemy Walter the Softy (copyright infringements including the character’s glasses, hair parting, insistence on reminding others of his father’s successful career, and “snootiness”). But all the signage is in Beano speech-bubble type, everything’s bright yellow, there are recreations of the Beano editor’s office and the streets of Beanotown, and an atmosphere of sugar-rush benign delinquency reigns. It’s all there in Alex Chinneck’s sculpture of a red postbox that has, somehow, been tied in a knot Beano-style: everyday absurdity, the plasticity in the concrete world, the sense that reality is somehow less real than the glorious riot of the mind. The notion that we all live in Beanotown, whether we know it or not.

Today’s Beano, Smith explained, understands its readers as deeply as any serious media enterprise should, and changes itself accordingly, modernising characters and making space for walk-ons of real people the readers will recognise, from Matt Lucas to Charles and Camilla to Beano character manqué Boris Johnson. The result is reader figures that even well-known magazines would kill for: 54,800 a week, including an enviable 37,075 on subscription, according to the Audit Bureau of Circulation.

From reader panels and research publishers, DC Thomson knows that kids no longer see race or gender as major issues. The most popular new strips include go-ahead Asian family business Har Har’s Joke Shop and Dangerous Dave, who is black but, more importantly, Beanotown’s top secret agent. Nor do they imagine themselves in 1950s-style adversarial relationships with their parents. They would view supposedly traditional scenes of dad punishing Dennis with a slipper with horror and bafflement.

Dennis himself no longer rages against his arch-enemy Walter because Walter is effeminate, but because Dennis’s moral and class antithesis is now a cruel toff and a joyless fun-sponge. “[Walter] doesn’t want to be a kid,” editor Mike Stirling explained to the Guardian. “He wants to be a grown-up and is always snitching on kids who are having fun.”

But what do I know? I decided to ask a current reader about the Beano’s reinvention. Seven-year-old Evan is a Beano-fiend after my own heart who collects vintage back issues (“2010, four years before I was born!”). He likes the Beano simply because it’s “funny and cool”, and doesn’t agree that the occasional cameo from real-life figures will confuse young readers. “I know who Dominic Cummings is,” he said. “He’s rubbish.” On the question of renaming Fatty as Freddie he is relaxed. “It’s not nice being mean, is it?” And what about the more time-honoured parental anxiety, that the Beano and Dennis are bad influences that will make kids naughty? “Nooo,” he said exasperatedly. “It’s just a story.”

“I think these Beanos now are a bit better than the old ones,” said Evan, who as a collector knows what he’s talking about. “The best thing about it is it’s really, really funny. And it comes every week.” Then he runs off to dig out a back issue, just as I would. Even in a world where our cynical Prime Minister combines the look of Dennis the Menace with the morals of the new, self-serving Walter, the flame is alive. If there is hope, it lies in the Beano.

Andrew Harrison is editor of the podcasts “Oh God, What Now?”, “The Bunker” and “Doomsday Watch”.

Topics in this article: Beano, Exhibitions