To mark the ten years since UNGA’s declaration, the charity WaterAid commissioned ten photographers to illustrate the impact these water and decent toilets have on people’s lives.

“I wanted to reflect on the fact that the abundance of water does not necessarily mean the quality of water. I live in a small town in the state of Bahía (Brazil) and we are in the middle of the rainy season. There is water everywhere, but it rains with such intensity that the water system collapses very often and there is no water at home. We just walked to one of the many streams and sources of water there is around with a few ideas in mind and played with the different possibilities.” 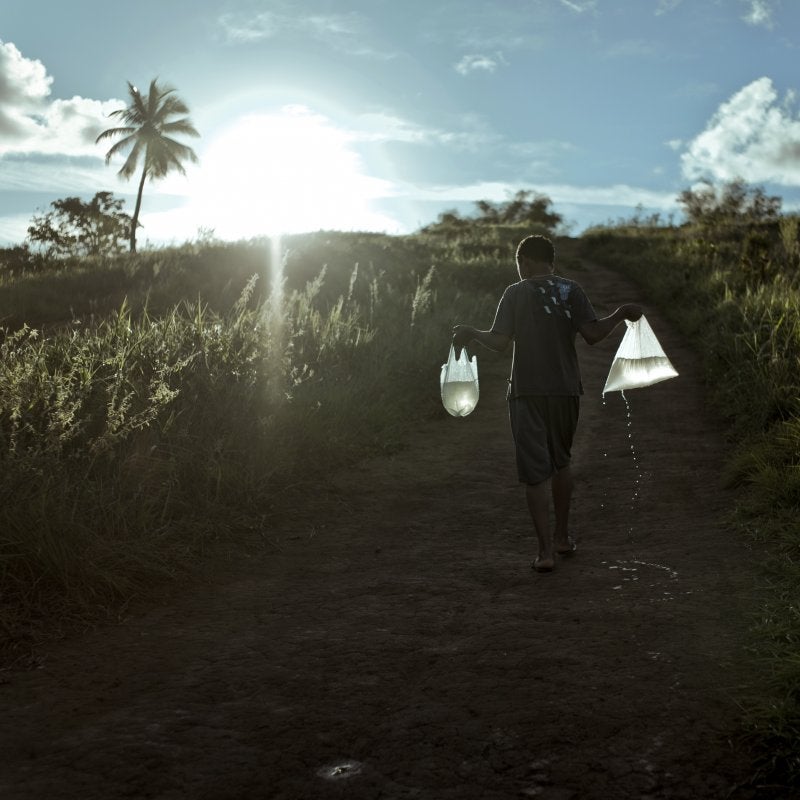 “Pour me Water, Pure Water presents one idea – bathing as an essential everyday ritual. This serves as a tribute to local workers around me here in Lagos, from the mechanics to the plumbers and the bricklayers who I see taking their baths, with their shorts on, behind parked buses. It is evident that without such right, a ritual as simple and important as bathing would be impossible. In the end, water is life.” 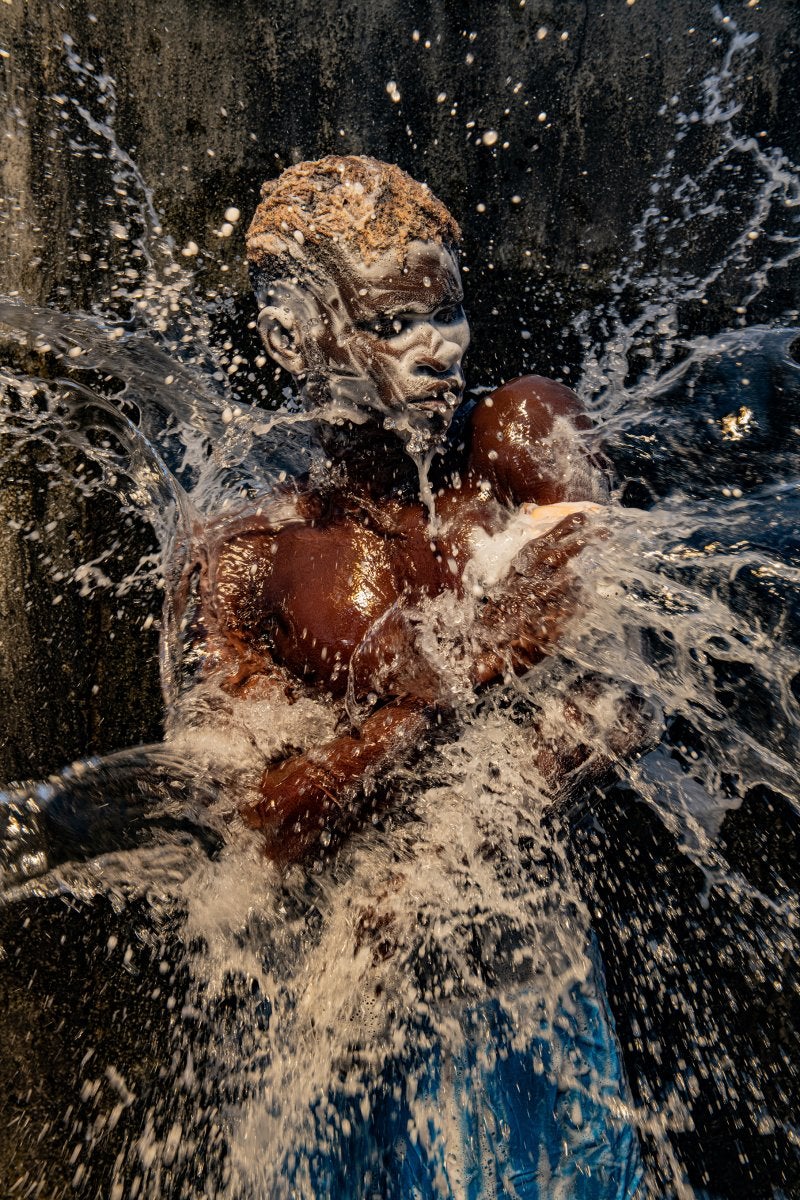 “In Ghana, the streets are filled with children carrying yellow buckets on their heads, on their way to a fountain…. Every day I would see women and children pour in by the hundreds. I want this photo to demand social justice by exposing environmental problems in today’s society. It inspires the human spirit by calling people to action.” 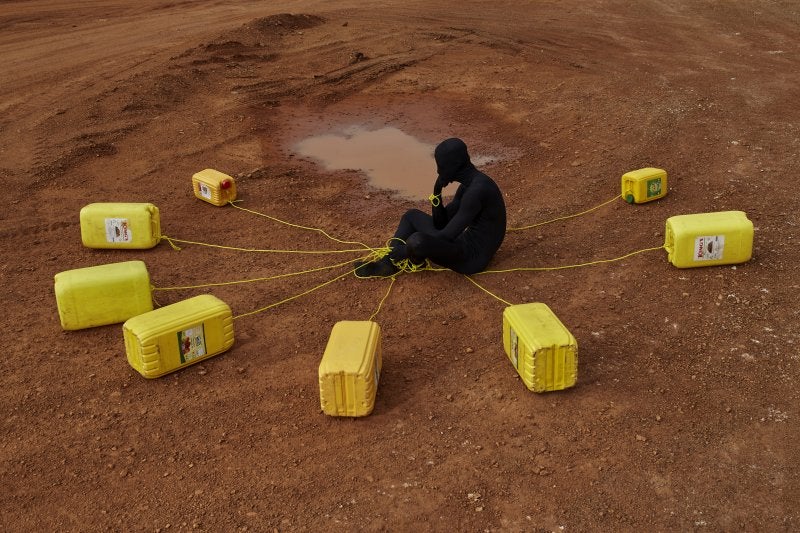 “For many communities, water sources are usually far from their homes, and it typically falls to women and girls to spend much of their time and energy fetching water, a task which often exposes them to attack from men and even wild animals. Without improved sanitation – a facility that safely separates human waste from human contact – people have no choice but to use inadequate communal latrines or to practise open defecation. Finding a place to go to the toilet outside, often having to wait until the cover of darkness, can leave them vulnerable to abuse and sexual assault.” 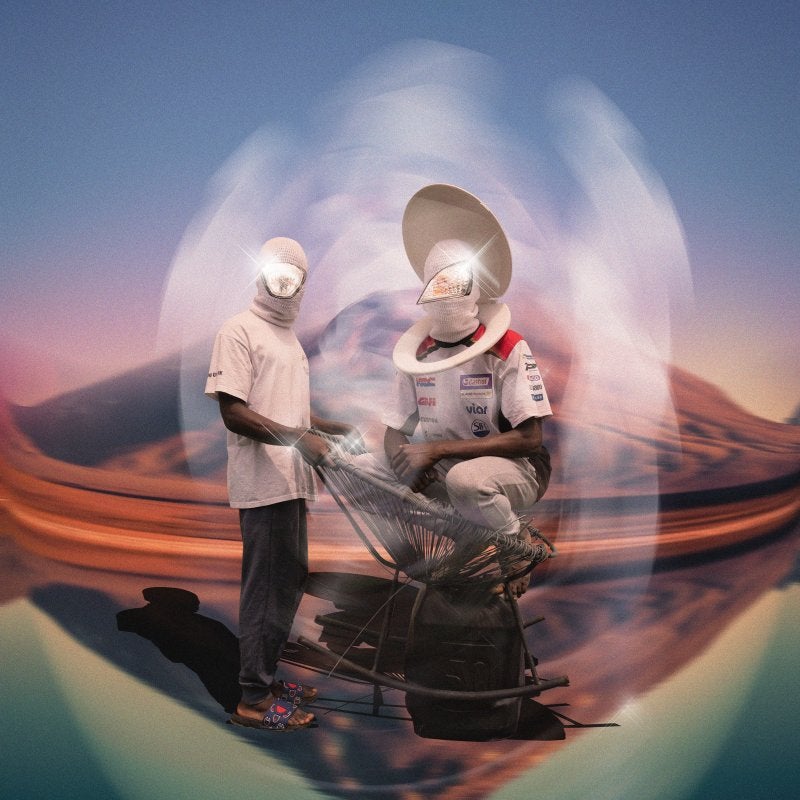 “[The work] dabbles into spirituality, functionality and gender, referencing Nigerian-Yoruba sitting sculptures with the poses. It dwells on the healing qualities of water as an integral part of a things. Water is a basic element of life and an essential factor in the Yoruba religion. Yoruba believe water to be a symbol of force and strength.” 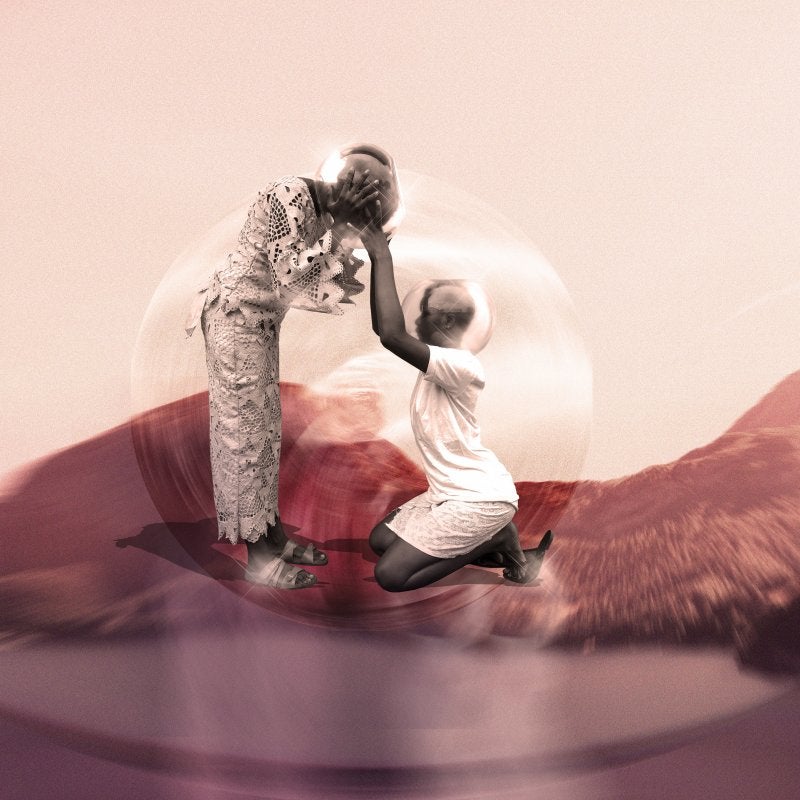 Collin Sekajugo, a Ugandan multidisciplinary artist living and working in Rwanda and Uganda

“I have always found the jerrycan to be such a symbolic item in African homes. In almost every community it’s used for trading consumer commodities… most importantly it’s commonly used for fetching and storing water. I have grown to believe that a home without a jerrycan is unliveable. This artwork speaks to the symbolism of a jerrycan versus its importance in accessing clean water and observing sanitation.  [It] is dedicated to all the women and children – especially young girls – who, on a daily basis, walk miles in search for clean water to sustain their families’ wellbeing.” 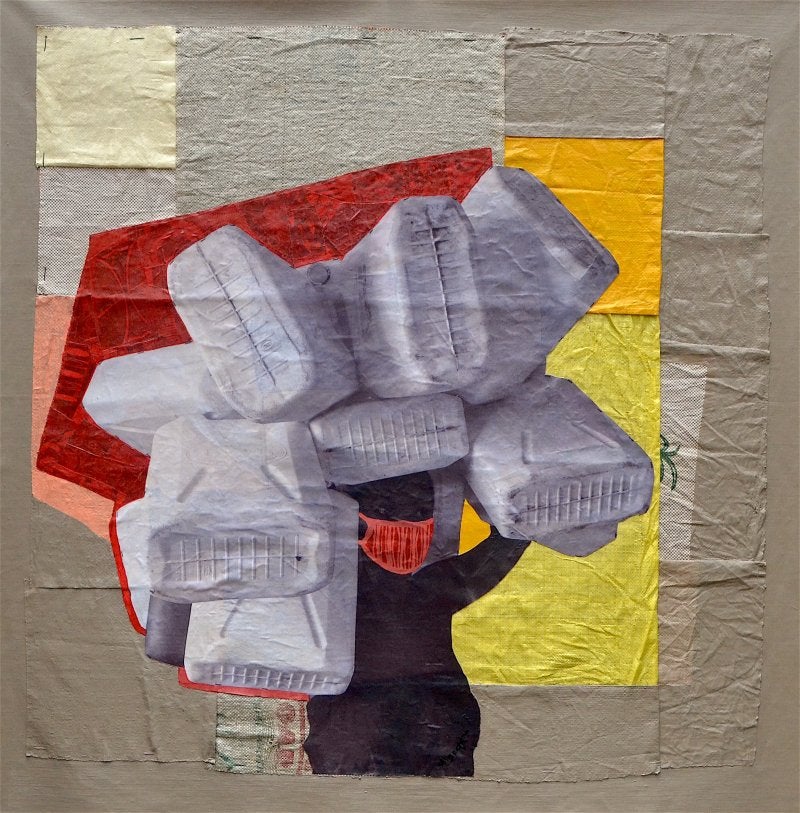 “The water in the bath tub [is] blood red: a symbol of menstruation. I have kept the boots, but added a bucket, a symbol of the great distances the many women around the world must walk to fetch water, or to find the seclusion of a forest, so that they can go to the toilet.  I’ve replaced the photo of Hitler with ‘Anjana, a 12 year-old child bride, Nepal’ from my series, ‘Blood Speaks’, to reframe this image in the shadow of all of those who live without adequate sanitation, and systems of blood politics and control, which are often connected.  I hope that this image makes people reflect on the easy access we have to water and sanitation, and how for so many women and girls across the world, this is simply not the case.” 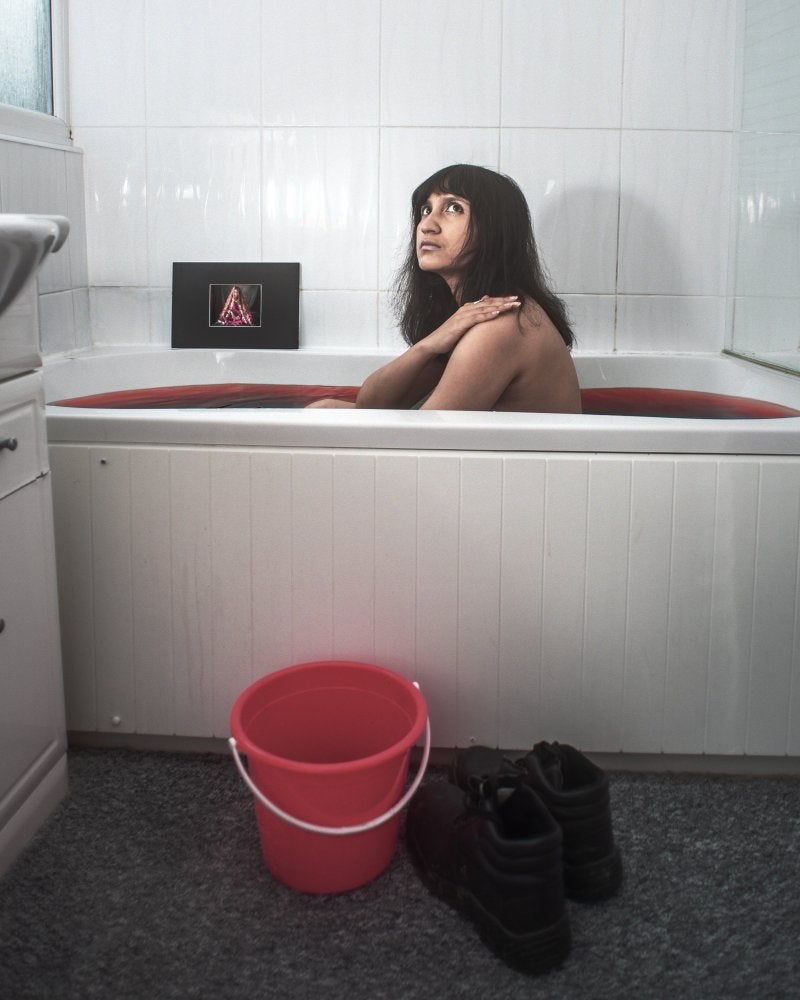 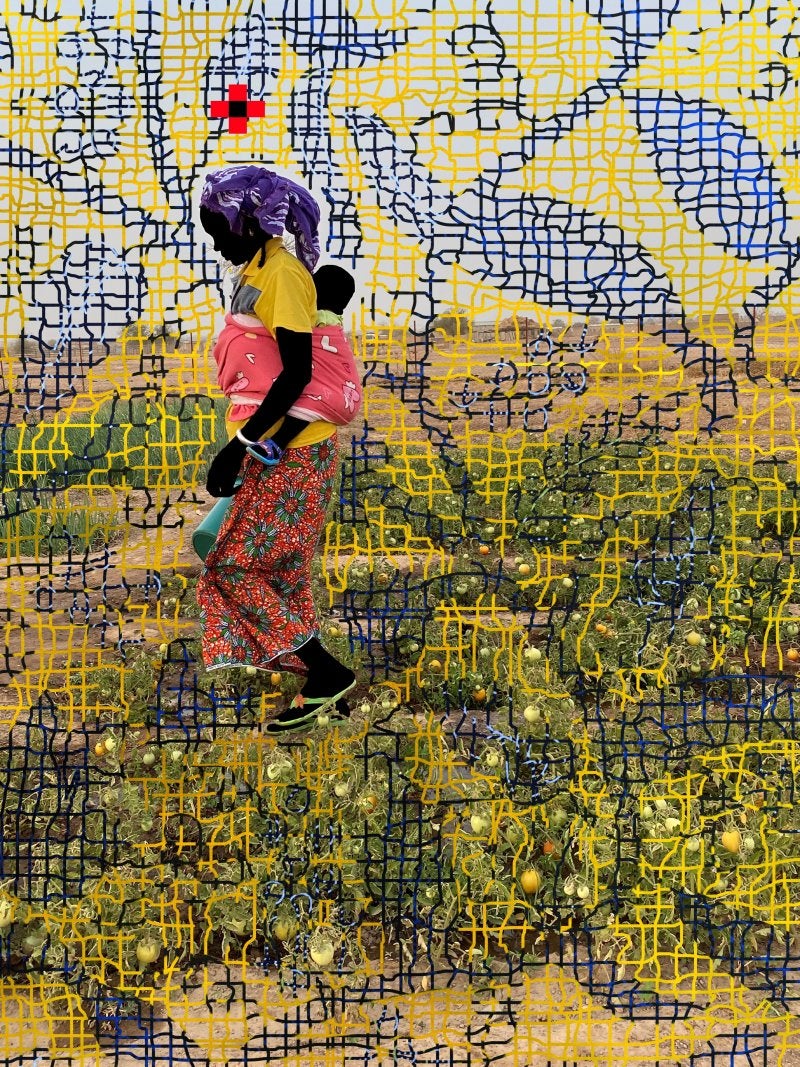 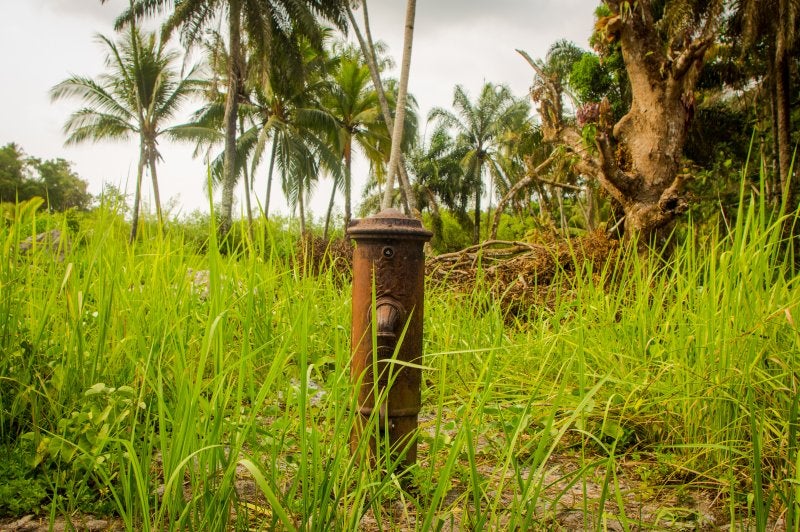 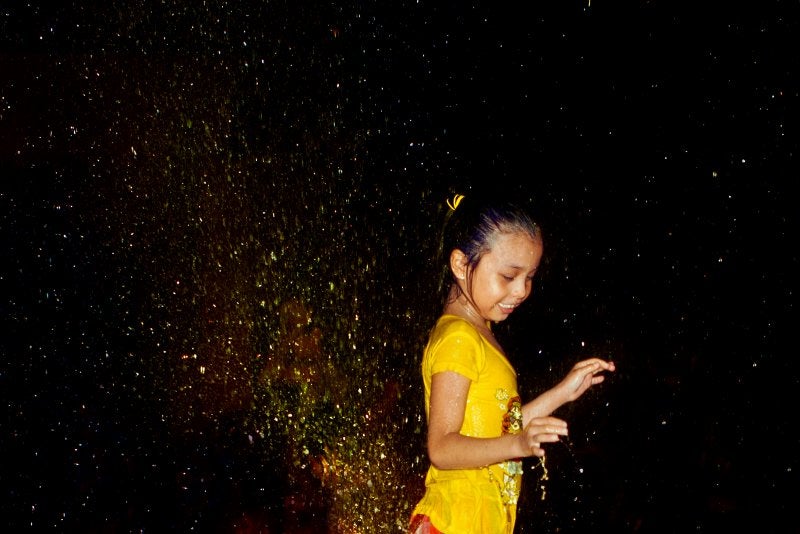 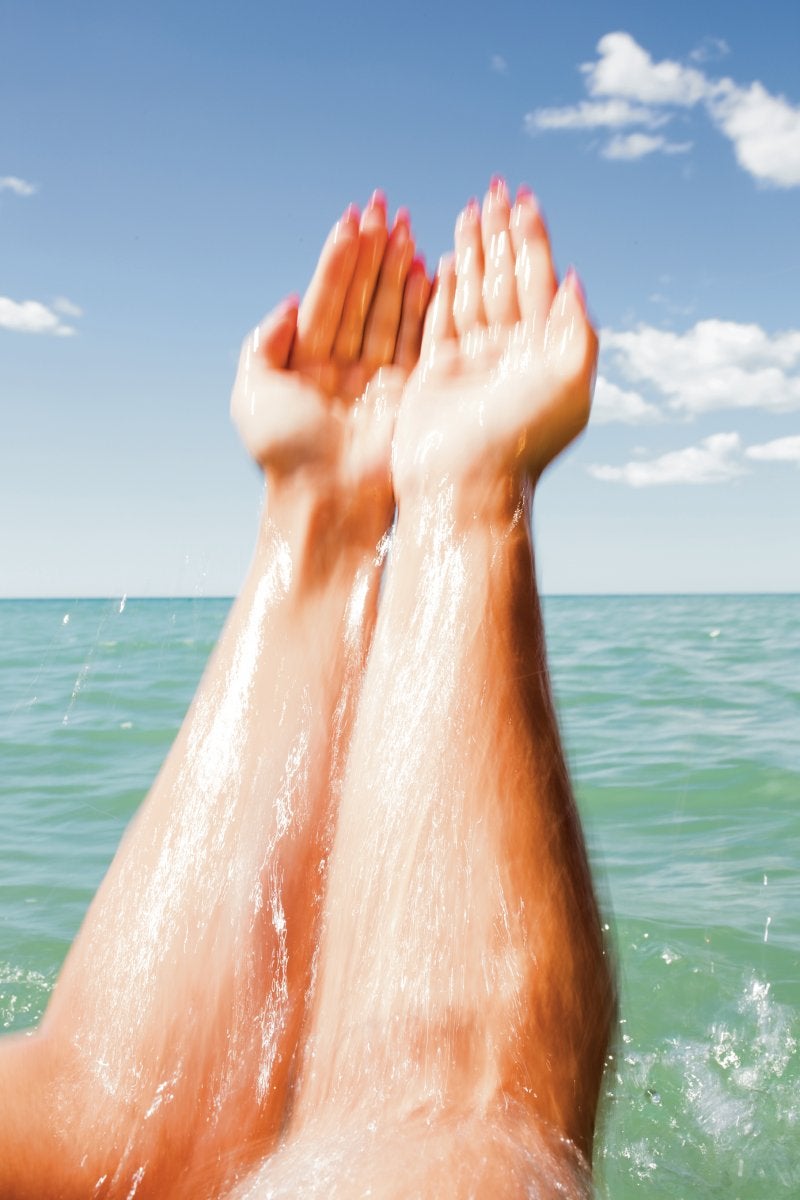 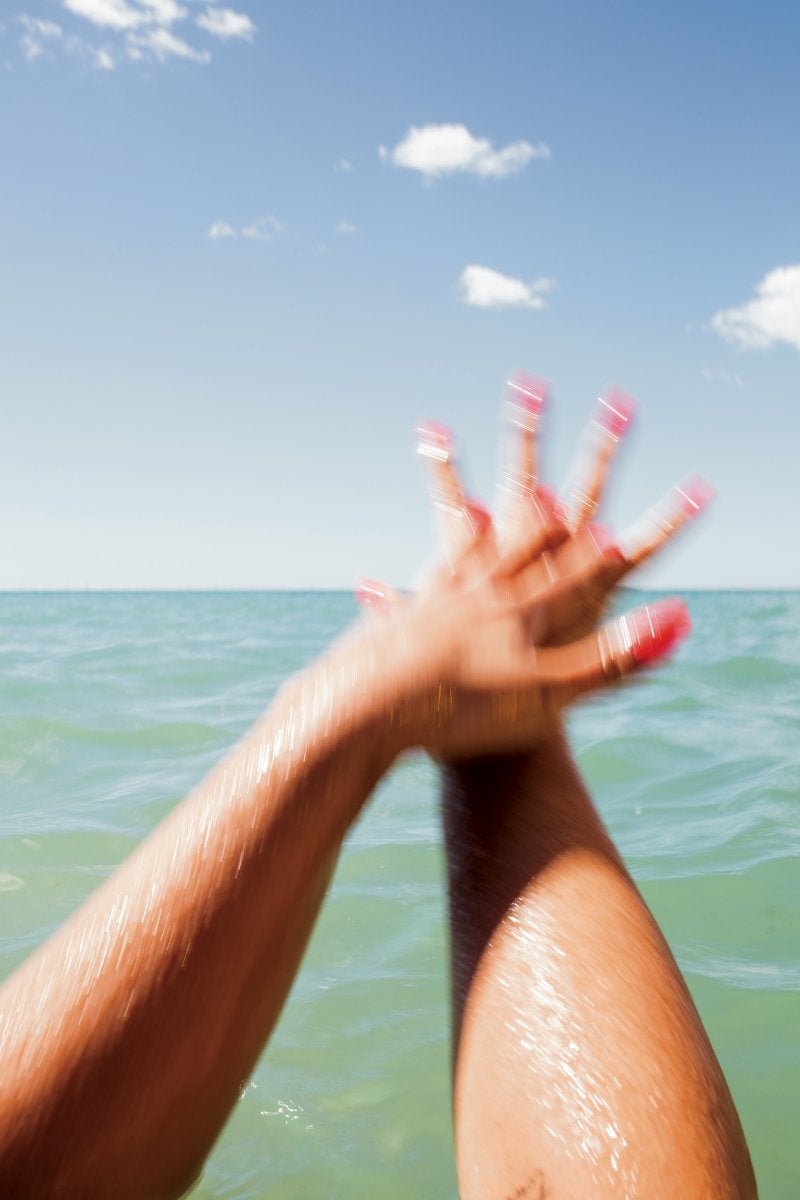 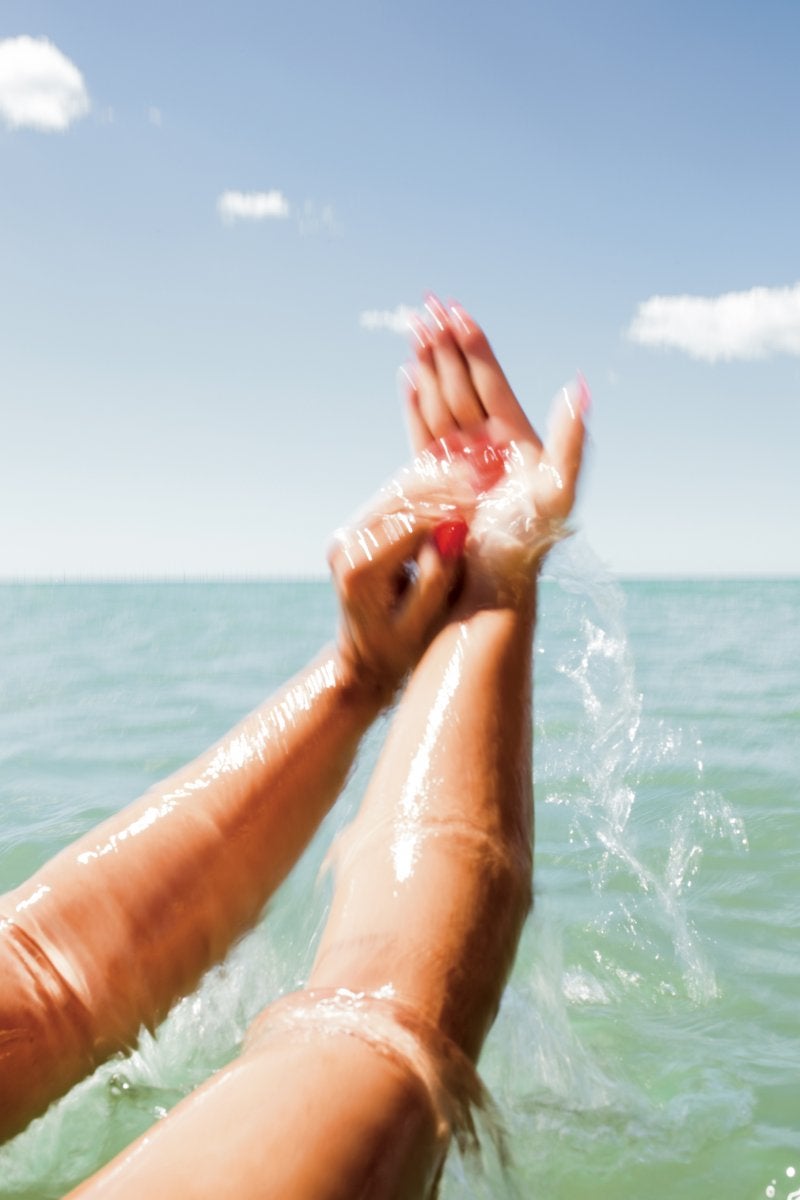 You can find out more about WaterAid’s response to the Covid-19 pandemic, and their work on access to water here: https://www.wateraid.org/global-covid-19-response