Dundee is being talked about again. This marks a change for my home city that has traditionally been ignored or represented by clichés: jute, jam and journalism, the Tay Rail Bridge disaster, and poet William McGonagall.

Now, Dundee is increasingly feted in national and international cultural circles. The cause of this renaissance is the recent opening (on 15 September) of the V&A, Scotland’s first dedicated design museum. It is a statement of intent, something reflected by the building’s dramatic aesthetics: an angular, ship-like structure that juts over the River Tay. In the city centre, it peeks out from behind side streets.

The fulfilment of Japanese architect Kengo Kuma’s £80m vision represents the first V&A outside London. Even in advance of the opening, Dundee’s marginalisation was ending. The Wall Street Journal and tourist guide Lonely Planet last year named it one of the world’s ten “hottest destinations”. GQ magazine described it as the “coolest little city in Britain”.

Whether this has the desired “Bilbao effect” on Dundee will be evident in a few years – measured by rises in tourist numbers and spending, and by whether locals, as well as visitors, talk positively of the “Dundee effect”. 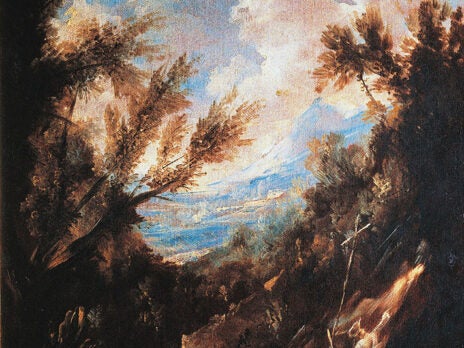 The flickering landscapes of Alessandro Magnasco

The building’s inaugural exhibitions are reassuringly impressive: one recalls the golden age of cruise liners, featuring a wooden panel fragment from the first-class lounge of the Titanic, a suit worn by Marlene Dietrich while sailing into New York on board the Queen Elizabeth, and a tiara rescued from the torpedoed Lusitania.

There is the recreation of Scottish artist Charles Rennie Mackintosh’s Oak Room, unseen for 50 years and even more stunning in the aftermath of the Glasgow School of Art fire. There is the splendour of the Scottish Design Galleries, showcasing original Beano artworks and video games (pioneered by Dundee since the mid-1980s). And there are learning centres, public spaces and rest spots, a café and restaurant, and windows out into the world.

The exhibitions are, as one would expect, curated to the highest standards. But there are two undoubted stars: the building and its ambience. In particular, the manner in which the V&A, inside and outside, relates to the River Tay. From either side of the building, sited between the long spans of the Tay Road Bridge and the Tay Rail Bridge, there are magnificent contours into the near-distance. Added to this are numerous terraces; a vista from the restaurant facing Captain Scott’s RRS Discovery ship; windows, large and small, letting in the light of the water, and a waterfront walkway.

Then there are the many thousands of people already visiting, paying homage to this recently settled wonder by the river. In the V&A’s first week, 27,201 people visited, nearly triple the weekly average expected in its first year. Should such numbers be sustained, nearly 1.5 million will visit in the first year.

The V&A has made Dundee a destination after years in which it was regarded as merely a stopover. And it has given Dundonians permission to feel greater pride in the city.

Dundee has historically been misunderstood. The perceived negativity of its people is often cited, and indeed was by several senior V&A staff I spoke to during my visit. But this stereotype masks so much. When a Dundonian working-class voice says “Ye cannae dae that”, a droll and playful undercurrent of humour is often present. Although there is scepticism, this is usually accompanied by a mischievous twinkle in the eye. But too many non-Dundonians simply portray a pessimistic, passive city.

It does, of course, face formidable challenges. Having been ravaged by deindustrialisation and privatisation, Dundee has the lowest wages of Scotland’s main four cities, the lowest employment rate (64.1 per cent) of any UK city, and the worst suicide rate in mainland Scotland (deaths reached a 21-year high of 37 in 2016).

The local authorities know these figures all too well. But Dundee’s comparatively small size – 147,710 people – has allowed an ambitious council to innovate. The leader of the council is 29-year-old John Alexander, of the Scottish National Party; he has tenacity, enthusiasm and, it seems, the popular touch.

Today, an array of cultural enterprises and initiatives exist for locals and tourists: the refurbished McManus Galleries in the heart of the city centre; Dundee Contemporary Arts (DCA) in the West End; and Verdant Works, an old jute mill that has been converted into a museum telling the history of a once vibrant industry and of the city’s working class.

Creative Dundee, led by Gillian Easson, provides an independent space for artists to meet and share ideas, while the UK and Scottish governments will soon announce the long-awaited details of the Tay Cities Deal, with hopes of improved funding for Dundee.

What is illuminating about the city’s successes, says Joe Lafferty, the DCA chair, is that they are “not down to one key person or leader but rather people from all contexts being willing to collaborate with a spirit of generosity”.

The “city of discovery” is there to be rediscovered and wants to welcome people to its many attractions. It is no longer what my aunt called “a Cinderella city”, but one that has emerged from the shadows – an example of what can be done with advantageous geography and vision.

Yet we still have to ask: is reinvention, representing our past and commodifying culture, enough for our cities and society? As a Dundonian writing about my home town, I know these questions matter, but I also feel a sense of pride at the efforts of my fellow citizens to confront the city’s challenges with ambition and creativity. In one respect, perhaps, Dundee offers a glimpse of the future: after the global leviathan has displayed its limits, there is consolation to be found in the local, particular and unique.