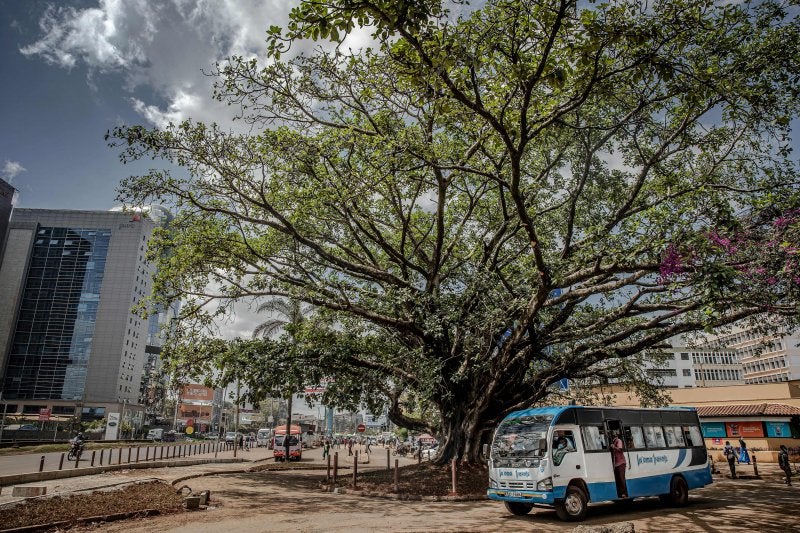 On 12 November, a presidential declaration was issued to save a century-old fig tree from being cut down to make way for a Chinese-funded highway in Westlands district of Nairobi, Kenya. Conservationists had launched a campaign to protect the tree, which the country’s President Uhuru Kenyatta described as a beacon of Kenya’s cultural and ecological heritage. The plan to uproot the fig tree has now been abandoned. Photo by Luis Tato / AFP 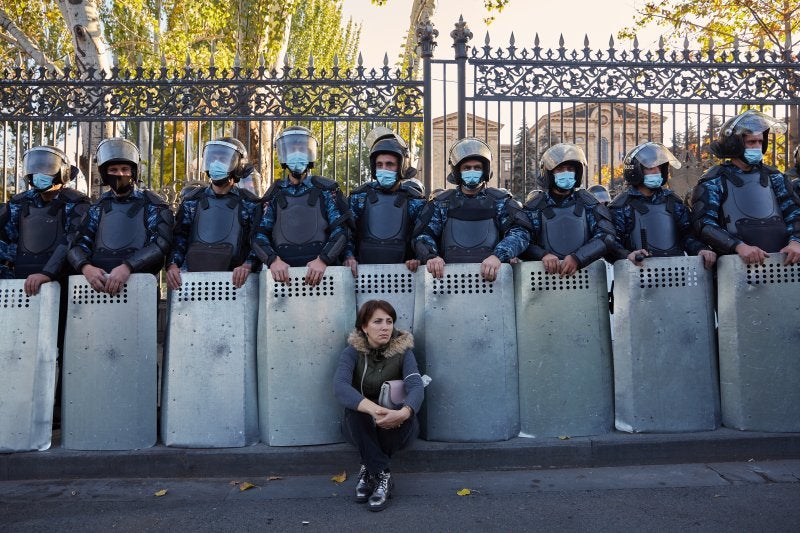 Riot police stand in formation as protesters march to demand the removal of Armenian Prime Minister Nikol Pashinyan from office outside the Armenian parliament building, in the capital of Yerevan, on 11 November 2020. The demonstrations come after Armenia signed a Russia-brokered deal with Azerbaijan, which Armenian Prime Minister Nikol Pashinyan called “incredibly painful both for me and both for our people”. The agreement cements the gains that Azerbaijan made during the recent fighting, and forces Armenia to withdraw from several areas in and around Nagorno-Karabakh. Photo by Alex McBride / Getty Images 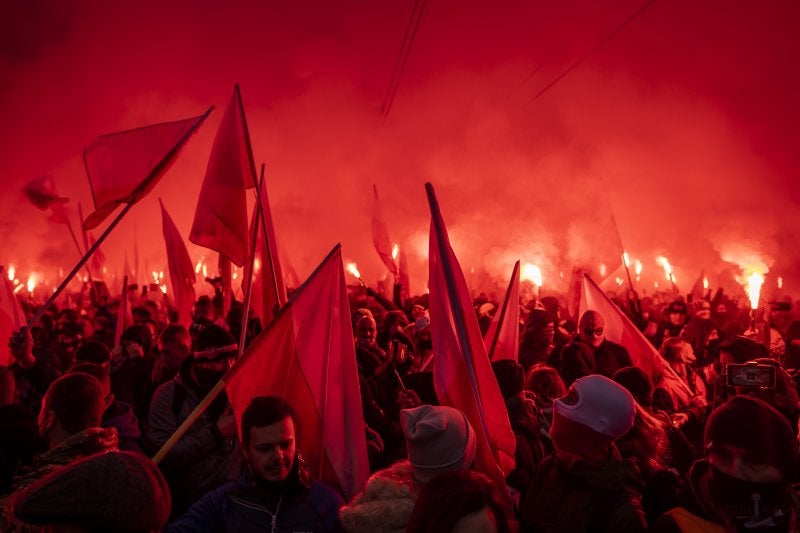 Polish far-right supporters hold flags and light flares as they march through the centre of Warsaw to mark the country’s Independence Day, 11 November. Photo by Wojtek Radwanski / AFP Photographers look over a fence in Downing Street, London, the morning after Lee Cain announced he is resigning as Downing Street’s director of communications. Cain will leave the post at the end of the year, along with Dominic Cummings, Boris Johnson’s senior aide, who has also announced he will be leaving No 10 before Christmas. Photo by Stefan Rousseau / PA 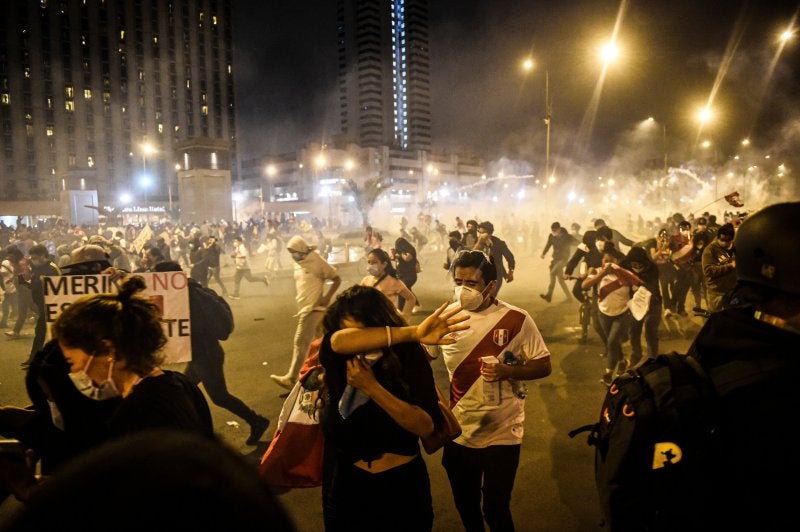 Demonstrators in Lima’s San Martin square run away from tear gas during a protest on 12 November against the new government of Peru’s interim president, Manuel Merino, following the impeachment and removal of the former president, Martin Vizcarra over corruption allegations. Speaker of Congress Manuel Merino assumed office on 10 November as Peru’s third president in four years. Photo by Ernesto Benavides / AFP 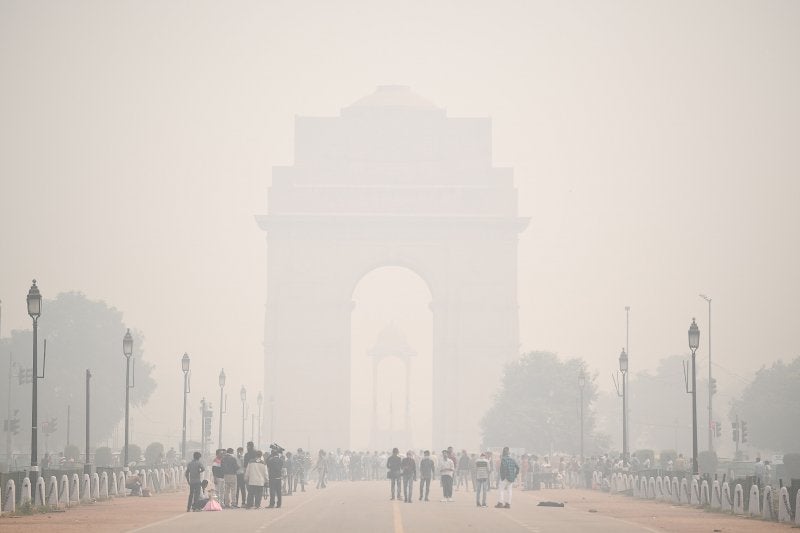 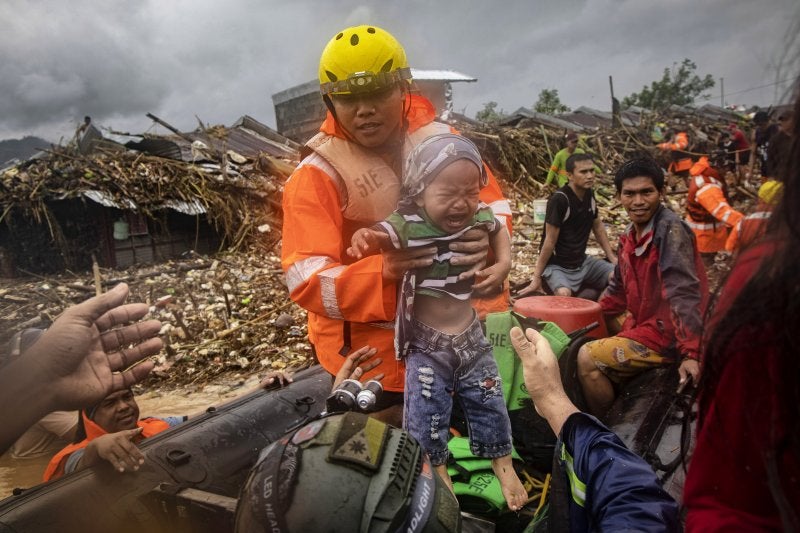 A baby is rescued as floodwaters continue to rise in a submerged village in Rodriguez, Rizal province, Philippines, on 12 November. Typhoon Vamco has battered the Philippines, causing widespread destruction in areas still reeling from the effects of Super Typhoon Goni. Photo by Ezra Acayan / Getty Images 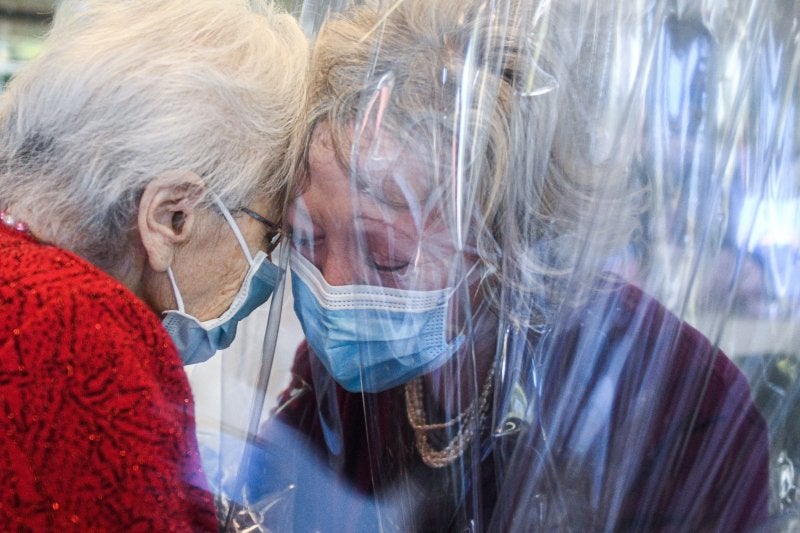 A resident (left) of the Domenico Sartor nursing home in Castelfranco Veneto, near Venice, hugs her visiting daughter through a plastic screen, in a “Hug Room” designed amid the Covid-19 pandemic. The Hug Room allows guests and their families to embrace each other, while remaining separate and protected from the contagious disease – guaranteeing physical contact for mental and emotional wellbeing. Photo by Piero Cruciatte / AFP 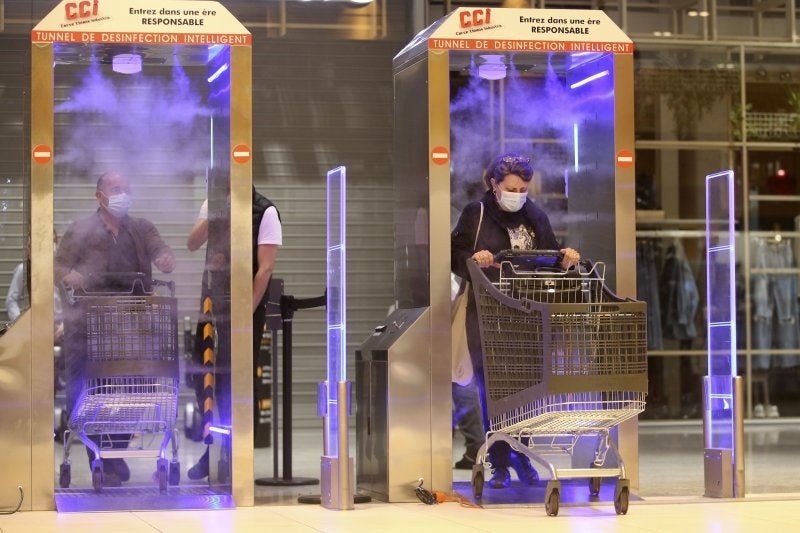 Customers walk through a “disinfection tunnel” as they enter the Leclerc Baleone supermarket in Ajaccio, on the French Mediterranean island of Corsica, on 9 November 2020. Photo by Pascal Pochard-Casabianca / AFP 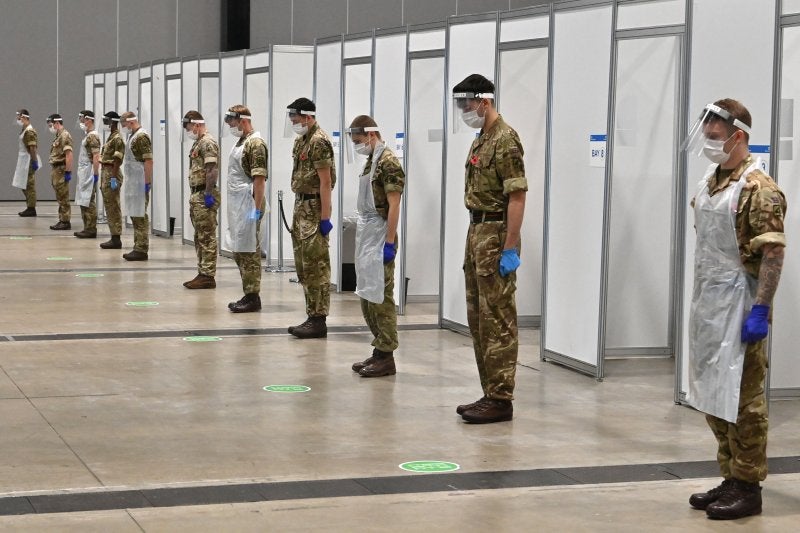 Soldiers at a coronavirus rapid-testing centre in the Liverpool exhibition centre observe a two-minute silence on Armistice Day, in remembrance of the nation’s war dead. Photo by Paul Ellis / AFP 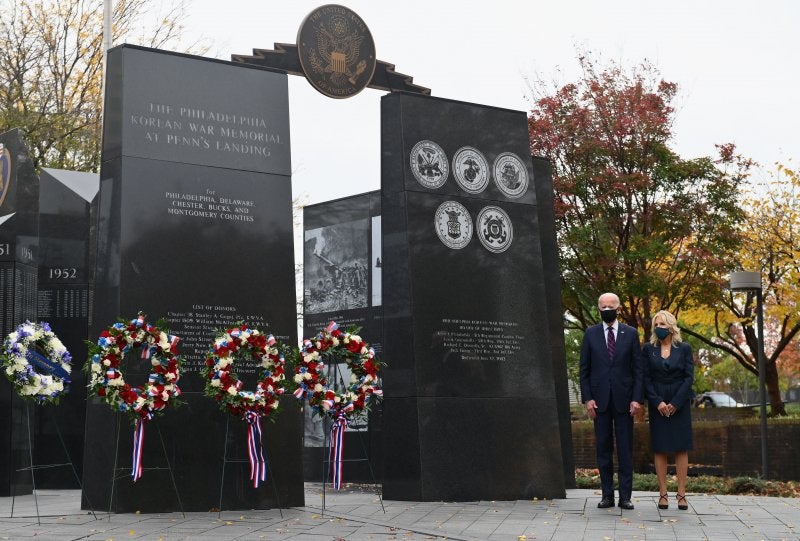 The US president-elect, Joe Biden, and his wife, Jill Biden, pay their respects during a Veterans Day stop at the Korean War Memorial Park in Philadelphia, Pennsylvania, on 11 November 2020. The leaders of close US allies had phoned Bidenct Joe Biden and pledged to work together but in an extraordinary break, America’s top diplomat Mike Pompeo insisted that Donald Trump would remain in power.  Photo by Angela Weiss / AFP 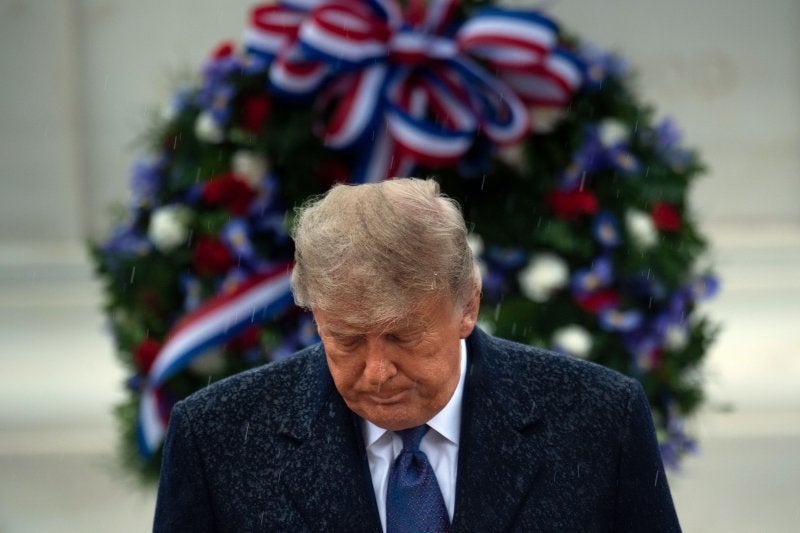 US President Donald Trump leaves after placing a wreath at the Tomb of the Unknown Soldier on Veterans Day at Arlington National Cemetery in Arlington, Virginia, on November 11, 2020.  This was the President’s first appearance after Joe Biden was officially announced as the President Elect.  President Trump has not yet conceded.  Photo by  Brendan Smialowski / AFP 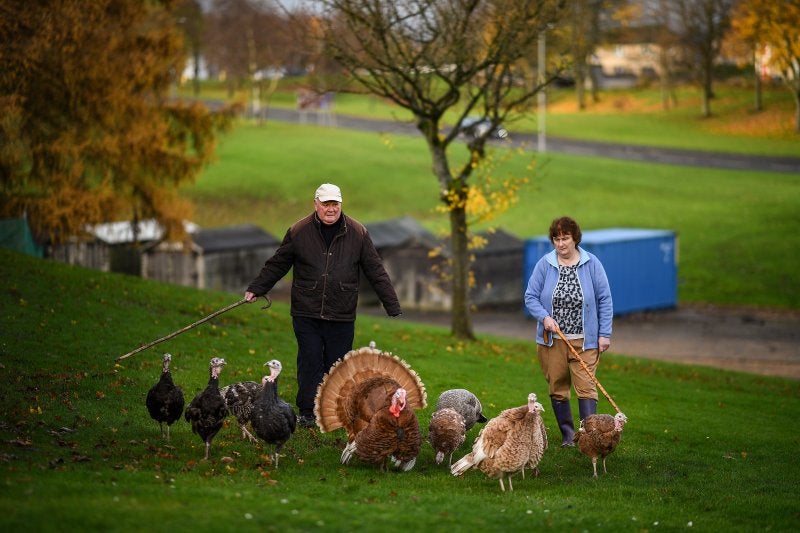 Retired businessman Brian Moodie, 74, and his sister Gillian Moodie herd his flock of turkeys, which contains several rare breeds, along the street near his home in Camelon, near Falkirk, Scotland, on 12 November 2020. Moodie started looking after birds in his garden ten years ago, to help conserve the rare breeds. Photo by Jeff J Mitchell/Getty Images 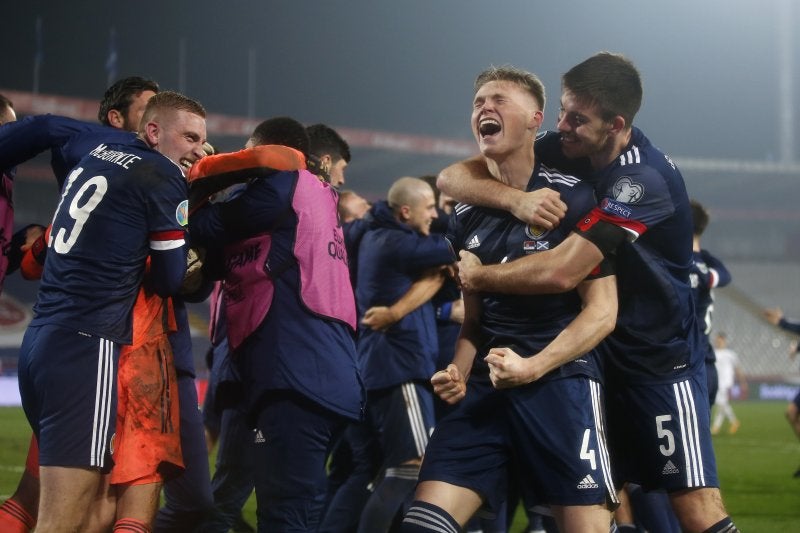 Scott McTominay and Declan Gallagher of Scotland celebrate after the Uefa Euro 2020 Play-Off Final between Serbia and Scotland on 12 November at Rajko Mitic Stadium in Belgrade, Serbia. Photo by Srdjan Stevanovic/Getty Images 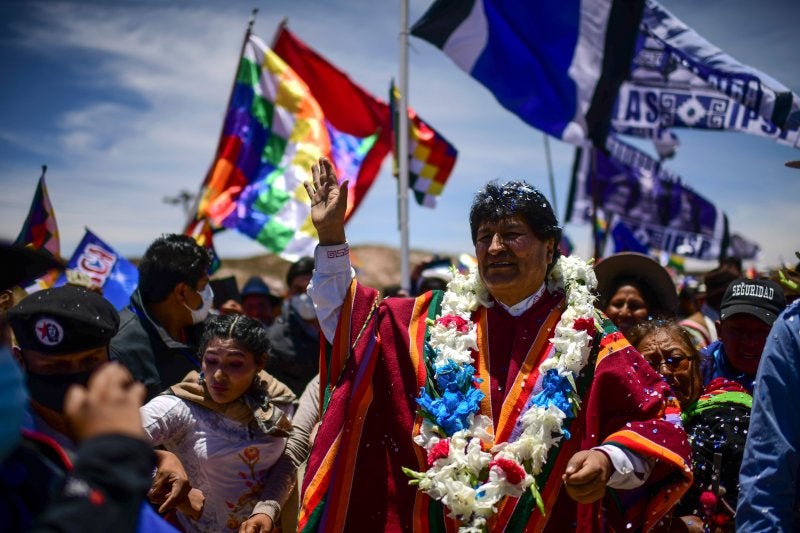 Bolivia’s former president, Evo Morales, waves surrounded by supporters in his hometown Orinoca, on 10 November 2020. The leftist former leader had made his return from Argentina the day before, triumphantly ending a year-long exile that followed a failed bid for a controversial fourth term. Photo by Ronaldo Schemidt / AFP 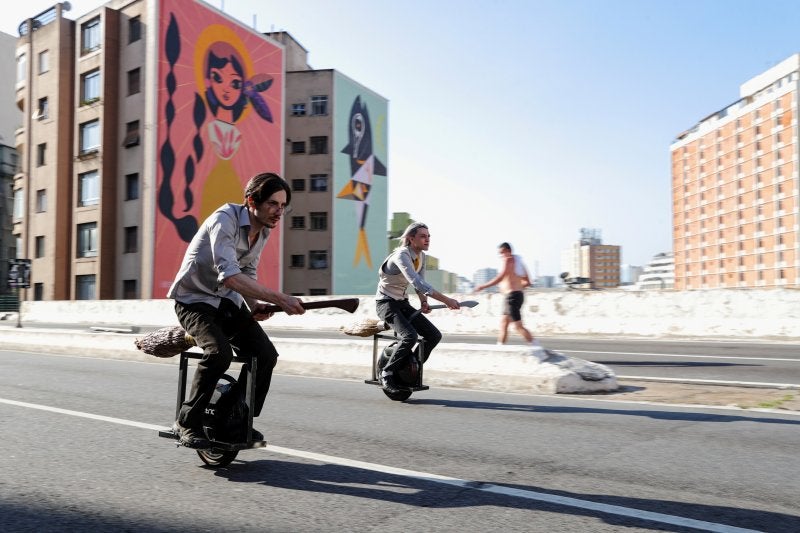 Exmoor ponies, which are part of a conservation project by the National Trust, are released near Malham Tarn in the Yorkshire Dales. The project hopes to tackle invasive plant species in the area. Photo by Danny Lawson / PA 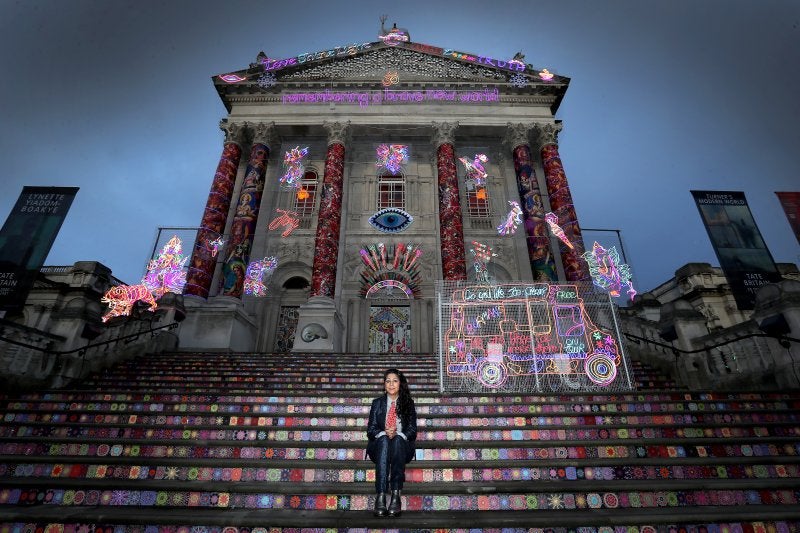 Artist Chila Kumari Singh Burman poses in front of her work during the unveiling of the fourth annual Tate Britain Winter Commission at Tate Britain in London on 13 November. Photo by Chris Jackson/Getty Images 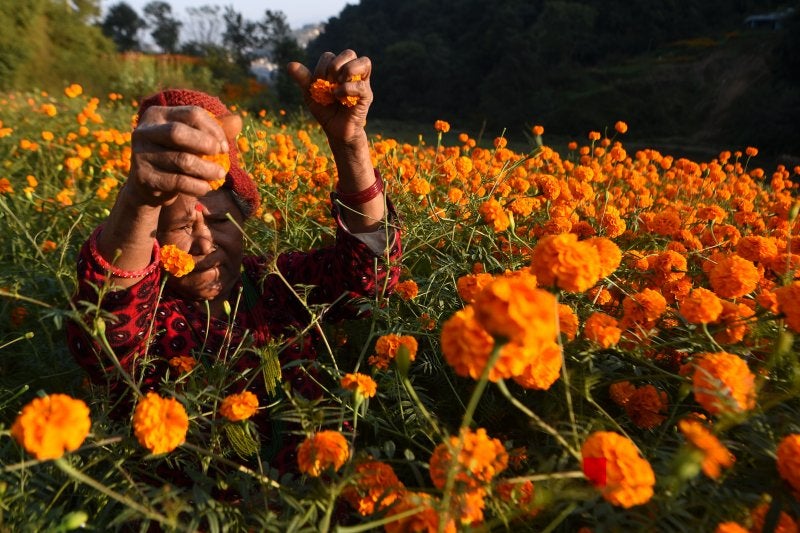 A woman harvests marigold flowers in Ichangu Narayan village, on the outskirts of Kathmand, on 9 November, ahead of the upcoming Tihar (Diwali) festival. Photo by Prakash Mathema / AFP