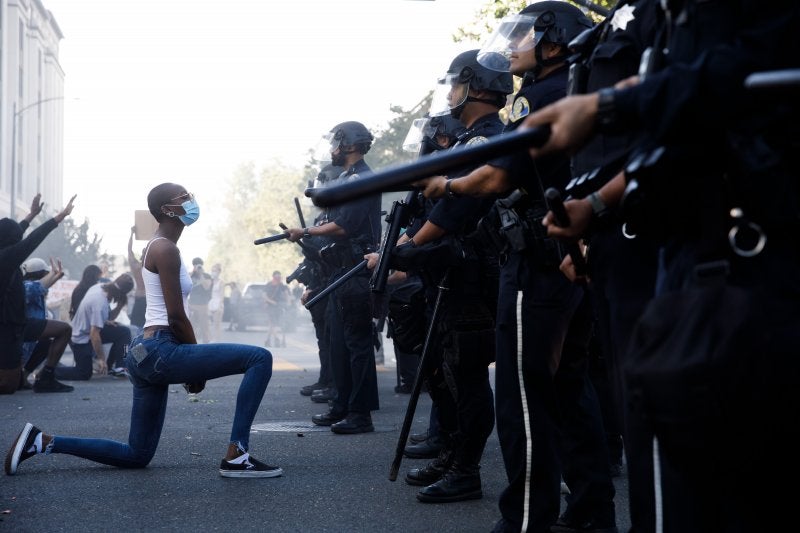 A protester takes a knee in front of San Jose Police officers during a protest in San Jose, California, on 29 May 2020, following the death of George Floyd in Minneapolis. Photo by Dai Sugano/MediaNews Group/The Mercury News via Getty Images 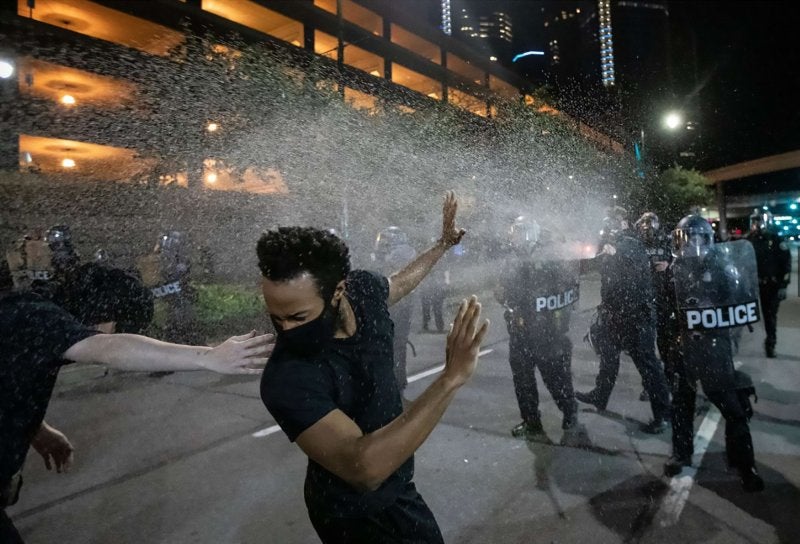 Protesters are sprayed with pepper spray by Detroit police officers in riot gear after an afternoon march and rally against police brutality extended into the evening, 29 May 2020. Photo by Junfu Han/Zuma Press/PA 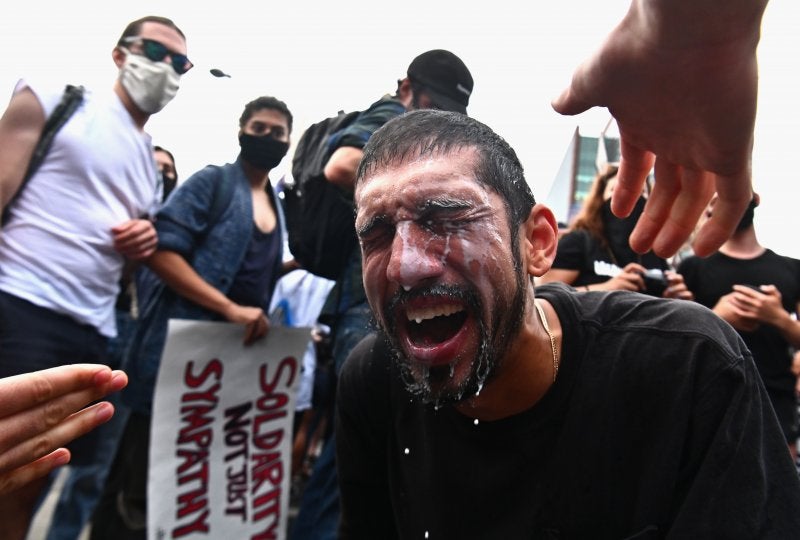 A protestor has milk splashed in his eyes after being struck by tear gas during a Black Lives Matter protest in Brooklyn, New York City, 29 May 2020. Photo by Angela Weiss/AFP 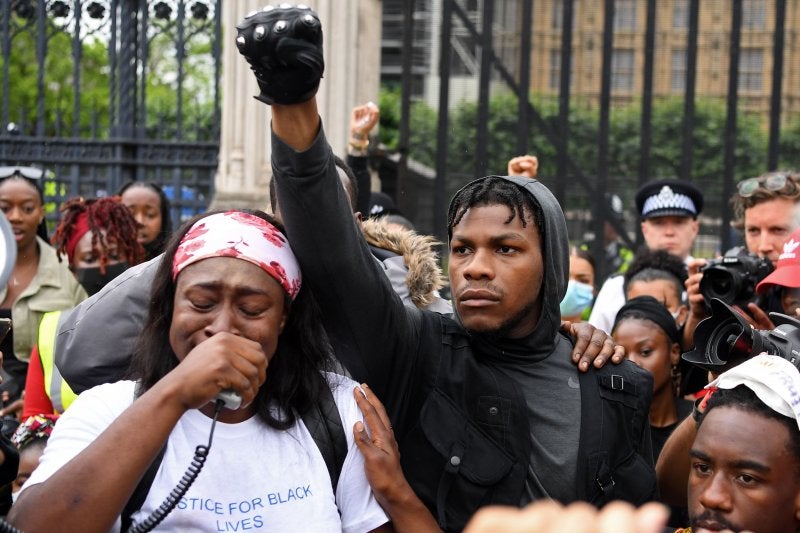 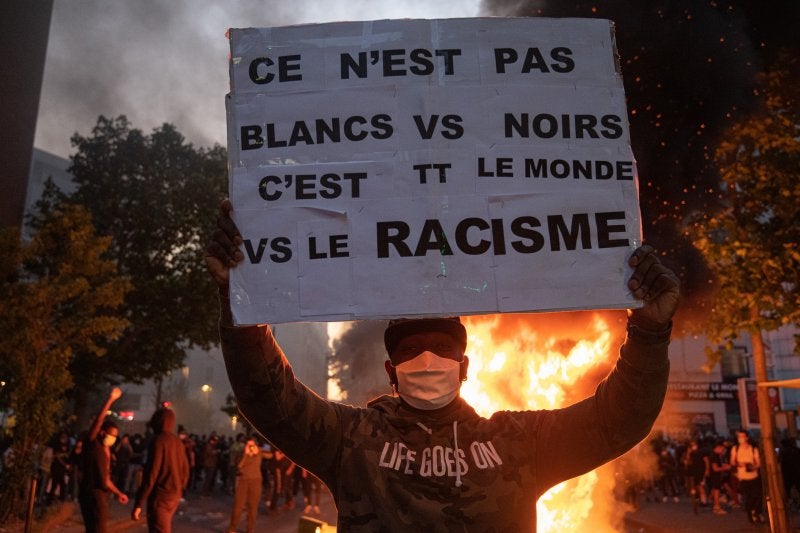 A demonstrator holds a banner, “It’s not white vs black. It’s everyone against racism” following the intervention of security forces in a protest against police brutality at the “Tribunal de Paris” courthouse on 2 June 2020, in Paris, France. Thousands of people gathered to protest against racism and police brutality despite a police order that the protest could not proceed due to coronavirus restrictions. The protesters decried the 2016 death of Adama Traore while in police custody in the Paris suburbs, drawing comparisons to the recent killing of George Floyd in the US.  Photo by Julien Benjamin Guillaume Mattia/Anadolu Agency via Getty Images 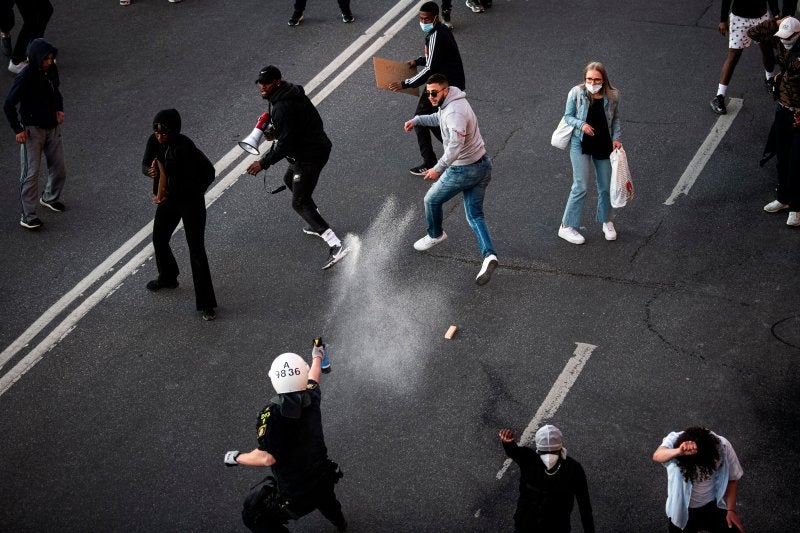 Police use pepper spray on protesters during a Black Lives Matter demonstration in Stockholm, Sweden, 3 June 2020.  Photo by Jonathan Nakstrand/AFP 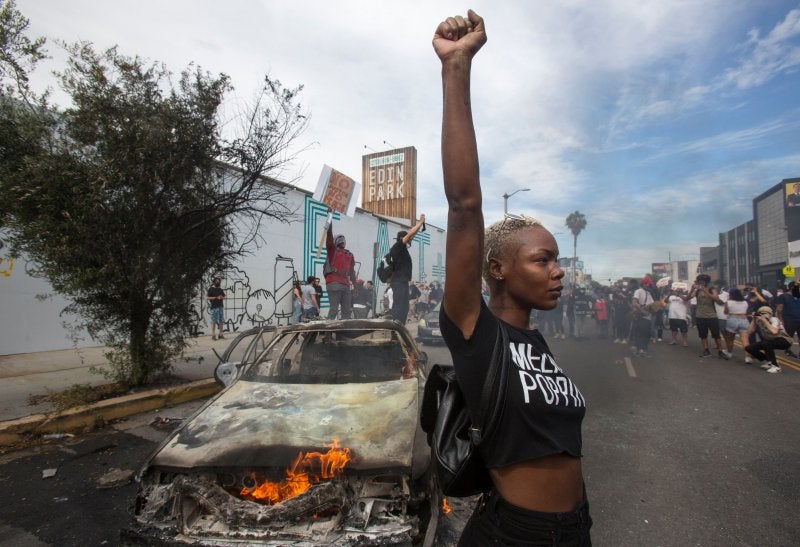 A protester stands next to a burning police vehicle in Los Angeles, 30 May 2020.  Photo by Ringo H W Chiu/AP/Shutterstock 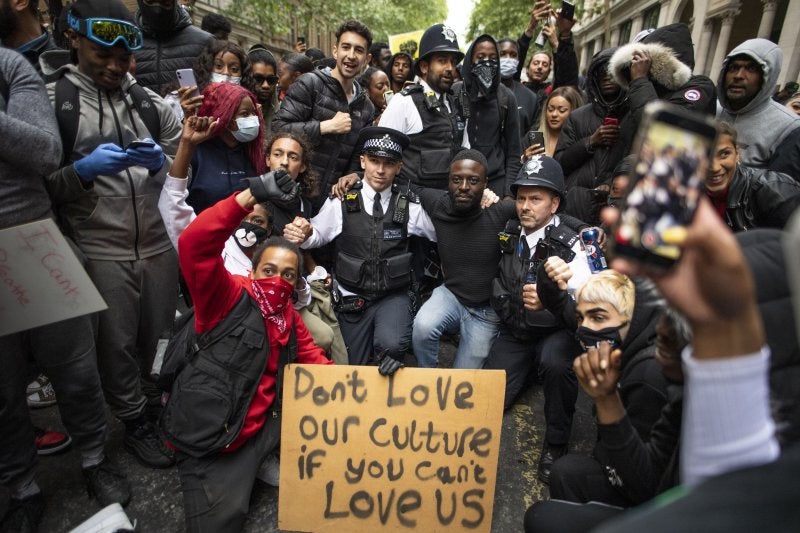 Protesters and police come together during a Black Lives Matter protest in London, England, 3 June 2020.  Photo by Justin Setterfield/Getty Images 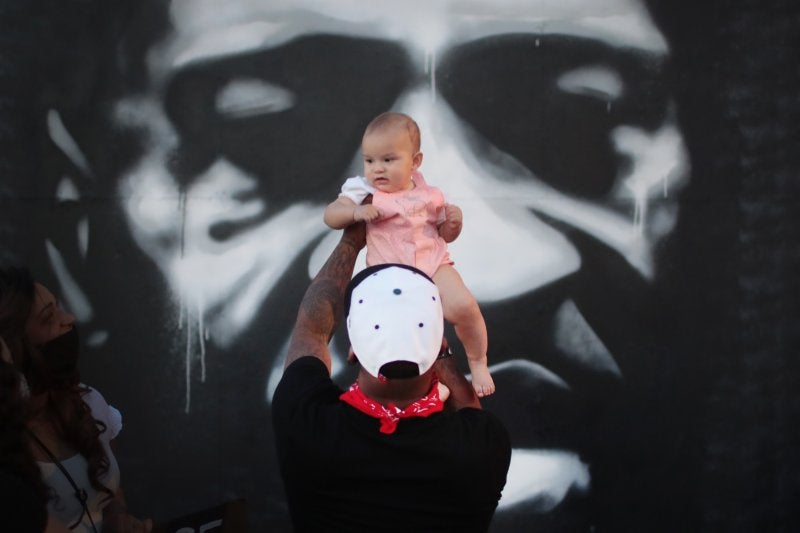 People visit a memorial at the site where George Floyd was killed in Minneapolis, Minnesota.  Photo by Scott Olson/Getty Images 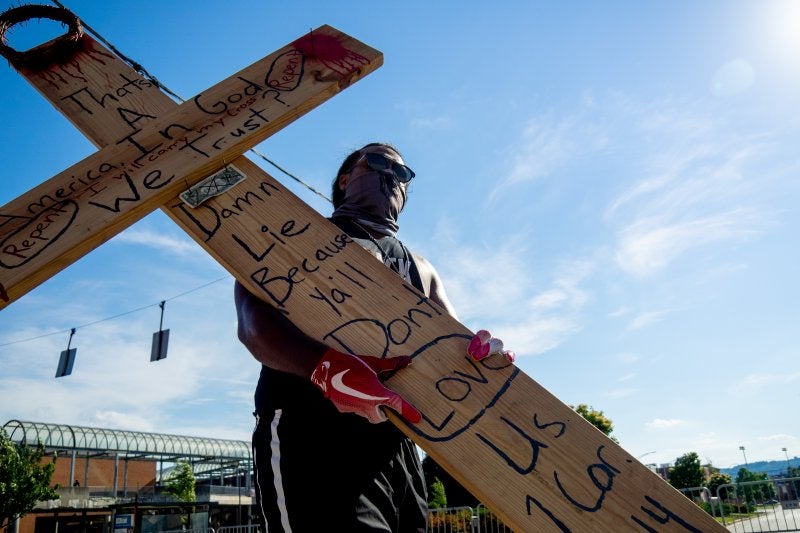 A man carries a wooden cross during a Black Lives Matter march in Cincinnati, Ohio, 3 June 2020. Photo by Jason Whitman/NurPhoto 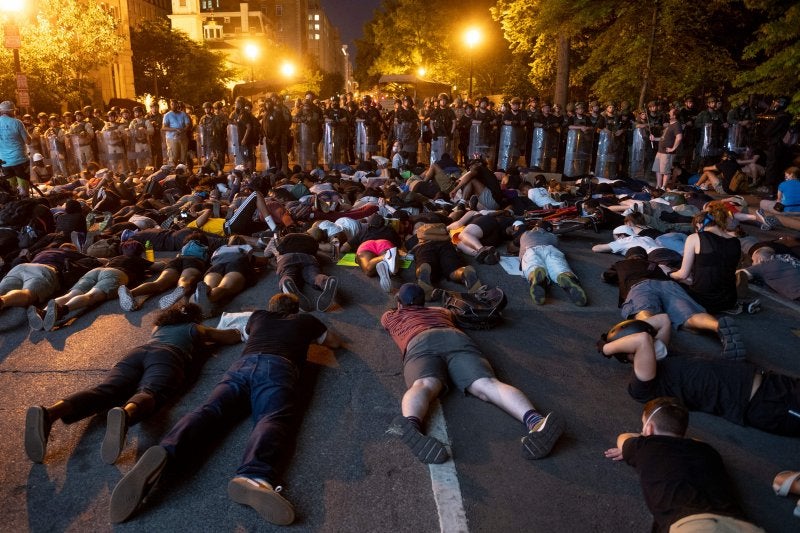 Demonstrators stage a “die-in” as they lay on the ground facing a police line in front of the White House.  Photo by Roberto Shmidt/AFP 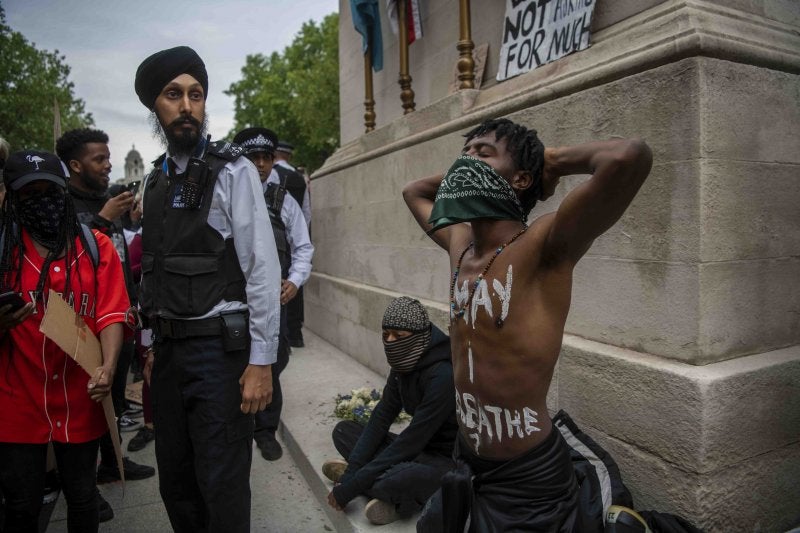 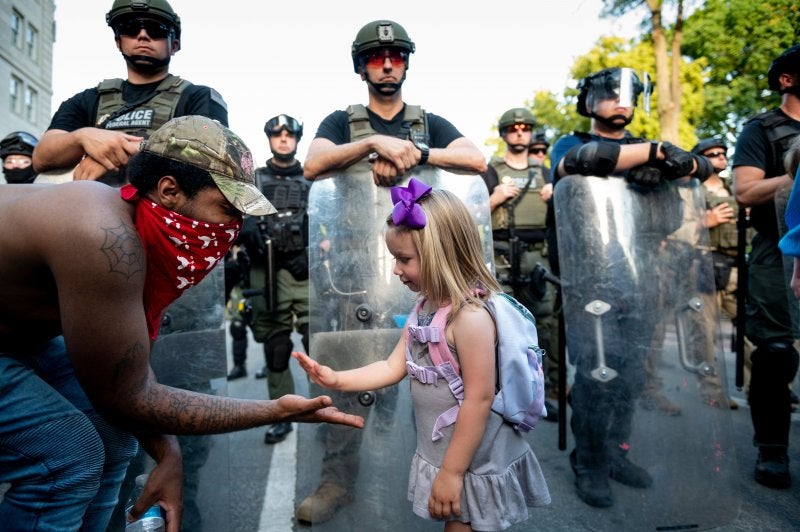 Twenty-nine-year old DC resident, George (L), slaps hands with three-year-old Mikaela (R) in front of a police barricade on a street leading to the front of the White House, 3 June 2020.  Photo by Roberto Schmidt/AFP 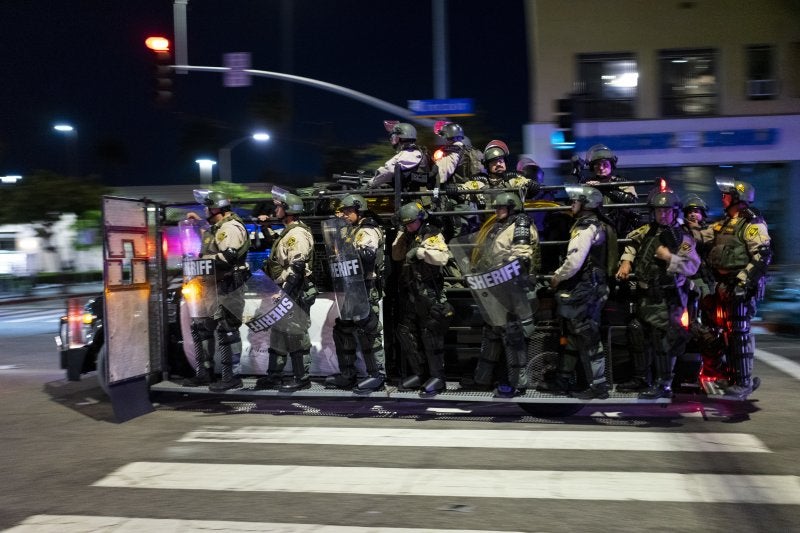 A group of LAPD deputies speed off to clear a block of protestors in LA, California, 31 May 2020.  Photo by Aaron Guy Leroux/SIPA USA/PA Images 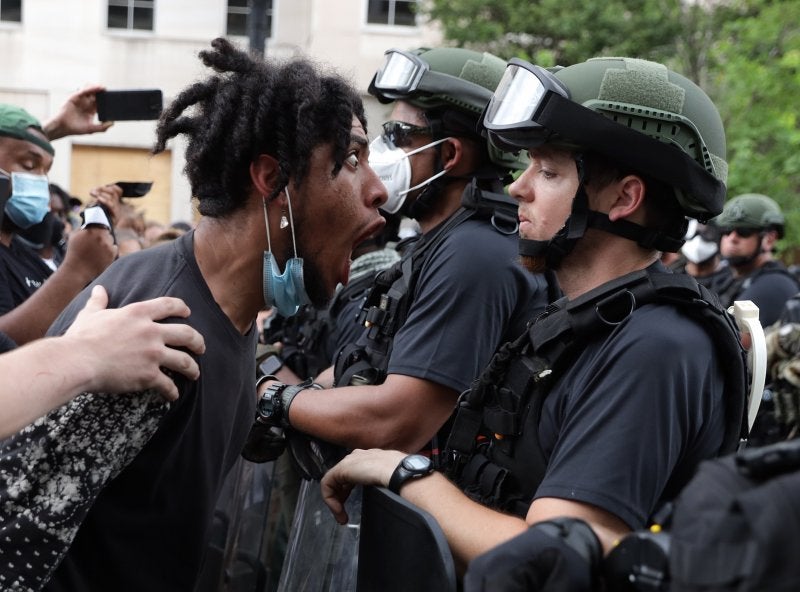 A demonstrator shouts at a law enforcement officer during a protest in Washington DC.  Photo by Alex Wong/Getty Images 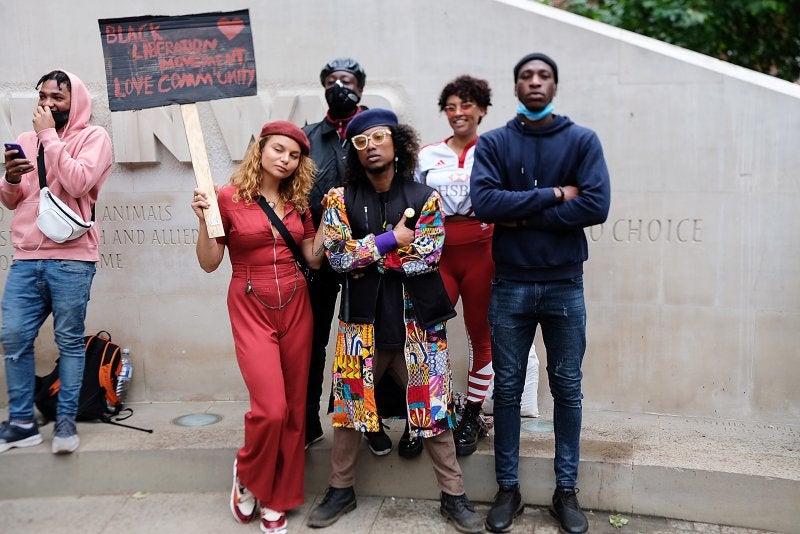 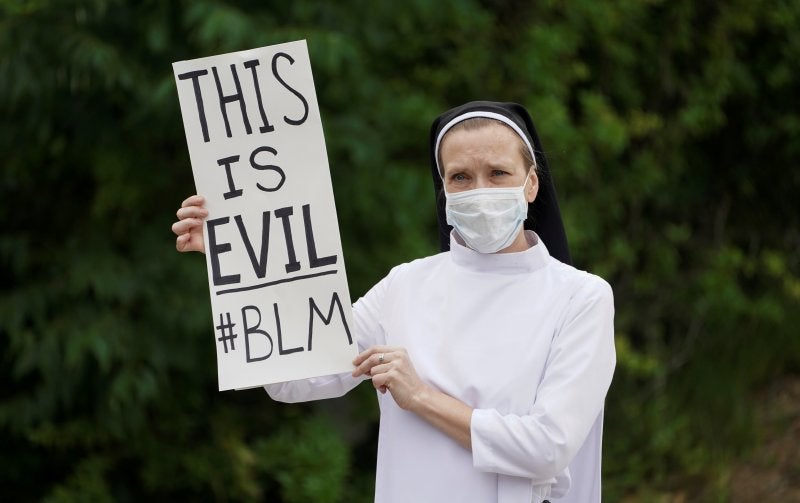 Sister Quincy Howard of the Dominican order of nuns in Washington protests with a sign reading “This is Evil #BLM” as President Donald Trump’s motorcade passes on the way to the nearby Saint John Paul II National Shrine, 2 June 2020.  Photo by Kevin Lamarque/Reuters 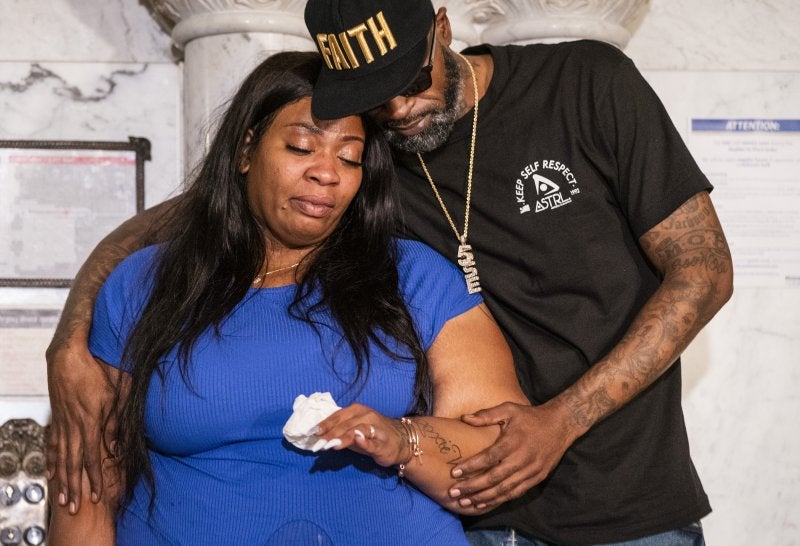