Sometimes, Siegfried Lenz writes in his acclaimed novel Deutschstunde (or The German Lesson, 1968), the “anchor of memory” does not take root but “rattles” and “jangles”, “stirring up mud” as it drags along the sea bed, destroying the tranquillity needed “to throw a veil over the past”. Ironically, Lenz’s book itself threw a veil over the renowned expressionist artist Emil Nolde (born Emil Hansen), the real-life figure on whom the book’s painter hero, Nansen, was based. It has taken the determined efforts of a Cambridge historian, Bernhard Fulda, and the Berlin art historian Aya Soika to rip off the veil that Nolde himself and the many guardians of his legacy had woven so carefully.

Until recently, the Nolde most of us knew was the man he wanted us to see. “Hitler is dead, he was my enemy,” Nolde wrote a few days before Germany surrendered in early May 1945. The artist put it about that the regime had forbidden him to paint, but that he had produced “unpainted pictures” in defiance of Gestapo surveillance. This notion drove the plot of Deutschstunde, as well as a major two-part adaptation for German television in the early 1970s, and is at the heart of an unfortunately timed new adaptation of the novel for the big screen by director Christian Schwochow.

The prominent display of his paintings in the first “Degenerate Art” exhibition of 1937 provided Nolde with the perfect alibi. A new postwar generation of Germans, seduced by the vivid colours and apparent naiveté of the work, embraced Nolde enthusiastically. The great and the good, including former chancellor Helmut Schmidt, gave their imprimatur by displaying his pictures. Even those who knew better, such as the legendary left-liberal literary critic Walter Jens, played along. Jens did not deny Nolde’s Nazi past, but argued that it should be “painted over” in order to “protect” the great man “from himself”.

To be sure, our understanding of Nolde and the wider relationship between Nazism and modern art has shifted substantially over the past 20 years or so. Historians such as Jonathan Petropoulos have shown that key figures, such as the propaganda minister Joseph Goebbels, were sympathetic to expressionism, at least of the “Nordic” variety, and indeed to Nolde himself. By the time of a major retrospective Nolde exhibition in Frankfurt in 2014, in which Fulda and Soika were closely involved, the edifice was already crumbling. Yet none of this made much impact on the popular view of the artist, whom the public still generally viewed as a resister, and whose paintings were deemed safe enough to adorn the office of the notoriously cautious Angela Merkel. 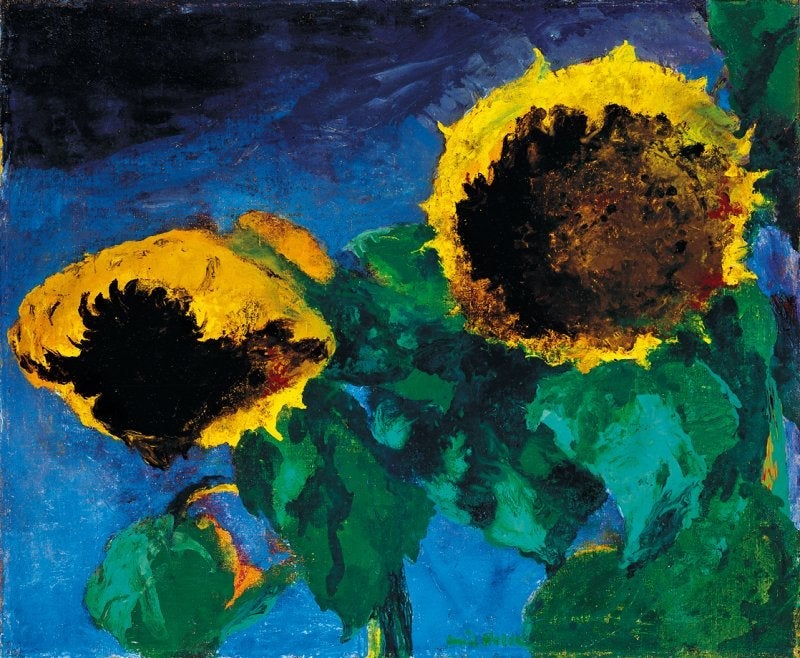 But thanks to a current exhibition at the Hamburger Bahnhof in Berlin – curated by Fulda, Soika and the courageous director of the Nolde Foundation, Christian Ring – all that has changed. “Emil Nolde: A German Legend. The Artist during the Nazi Regime” not only draws together all the material already in the public domain, which is incriminating enough, but also provides copious fresh evidence from the artist’s private correspondence. The exhibits of original letters are supported by two massive volumes of essays and documents. Nolde emerges not merely as a committed National Socialist from the beginning to the end of the Third Reich, but also as a fervent anti-Semite.

Nolde, in fact, was an anti-Semite, or at least in the grip of an anti-Semitic world view, long before Hitler took power. As early as 1911 he drew a distinction between “Jews” and “Germans” and claimed that the leaders of the Berlin Secession art movement, such as Max Liebermann, Lovis Corinth and Max Pechstein, were Jews. Nolde added that “the art dealers are all Jews”, as were the “leading art critics” and that “the entire press was at their disposal”. He went on at length in this vein, culminating with the allegation that the Secession movement was spreading like “dry rot” throughout the country. In the same letter the author claimed to be “no anti-Semite”, but his adherence to a classic anti-Semitic trope cannot be gainsaid. Twenty years later, and more than a year before the Nazis took over, Nolde wrote that “the whole Soviet system was of Jewish origin and served Jewish interests”, which were to use “the power of money” to gain “world domination”.

With the coming of the Third Reich, Nolde let the mask drop completely. He not only denounced his fellow artist Pechstein as a “Jew” (he wasn’t), but in the summer of 1933 drafted a plan, which he later destroyed, for how to remove Jews from German society. And unfortunately for him, plenty of other evidence has survived. In the autumn of 1938, for example, Nolde wrote that one could “understand” that “the operation for the removal of the Jews, who have burrowed so deep into all peoples” could not be carried out without “a lot of pain”. Not long afterwards, Nolde wrote to the Nazi press chief Otto Dietrich that he had spent his entire life fighting against the “too-great dominance of Jews in all matters artistic”. In November 1940, he praised Hitler’s speech on the anniversary of the failed Munich Beer Hall Putsch of 1923, especially the passages attacking “the Jews”.

If this was not clear enough, Nolde responded to the famous Dambuster raids in 1943, which Nazi propaganda attributed to the machinations of German-Jewish refugees, with “the war is becoming more and more ‘the Jewish War’”, adding that “they” were assiduous in pursuing their “plans for domination”. Not long after, Nolde elaborated that “a handful of smirking Jews hiding behind the governments and banks of their world powers” (meaning the United States and the British empire) were “financing and stoking this global brutal war”. The Jews, he continued, wanted to “destroy” Germany in the interests of “Jewish world domination”. In short, Nolde’s Nazism, and his essential complicity with the regime, is indisputable.

What saved Nolde, until now, was Hitler’s unrelenting hostility to his art. In the same year as he took power, the Führer repeatedly described Nolde as a “pig” and swore that he would not spend a penny of the new regime’s money on giving him commissions. Hitler also announced that gallery directors would be instructed not to buy any more of his works on pain of imprisonment. Nolde’s painting, he averred, was just a “pile of manure”. 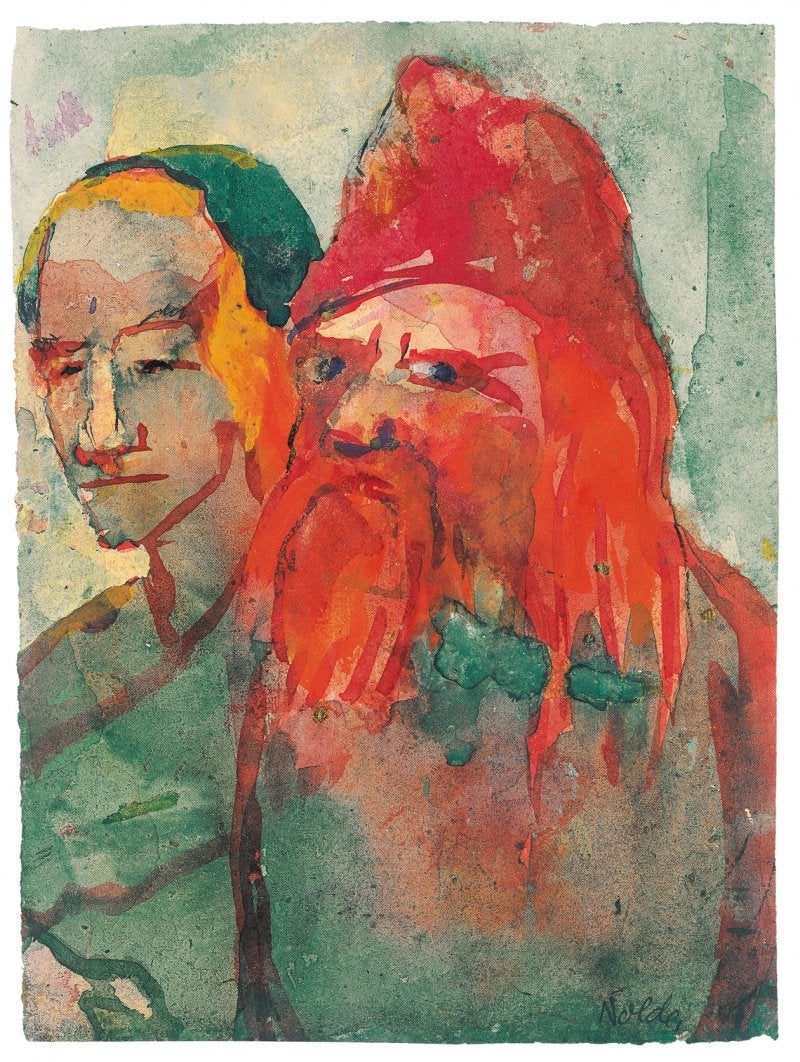 This is the Führer’s only recorded rant against the artist, but there are likely to have been many more. Hitler’s dislike of modernist art culminated in the notorious propaganda exhibition “Degenerate Art” in 1937, at which Nolde’s work was, at first, prominently displayed. Nolde, far from turning against the regime, considered the antagonism a tragic misunderstanding. He succeeded in having his pictures removed from the exhibition, and while he was not permitted to sell his work, he was able to paint without restriction. Some of the resulting canvases are displayed in the current exhibition. The supposed Malverbot forbidding him to paint, which sustains Deutschstunde, is entirely mythical.

The curators suggest that Nolde shifted from painting biblical, and thus potentially “Jewish” motifs, to more “Nordic” themes, especially Vikings, in order to appease his Nazi critics. If so, the artist showed a spectacular lack of understanding of the Führer’s aesthetics. Unlike Nolde’s powerful backer, the Reichsführer-SS Heinrich Himmler, Hitler had little interest in Scandinavians, whom he lampooned as dozy fishermen, and none at all in Vikings or the ancient German tribes. His contemporary “Nordic” ideal was British, and historically it was ancient Greece. For all the political sympathy, the aesthetic gulf between Führer and artist was too great.

The public reaction to the current exhibition has been unprecedented: it has frequently been sold out. The unfortunate producers of the new Deutschstunde movie have had to delay its release date to the autumn. Chancellor Merkel has removed the two Nolde canvases on her walls, a decision that did not meet with universal approval. Some wondered whether she should now also stop her annual pilgrimages to Bayreuth, so as not to be seen to worship an anti-Semite like Richard Wagner. A plan to hang some paintings by another expressionist, Karl Schmidt-Rottluff, was put on hold when it emerged that he too had made some anti-Semitic remarks. As one observer has remarked, the resulting bare white walls of Merkel’s office are also a statement.

None of this revisionism would have been possible without the support of the current leadership of the Nolde Foundation – a body that had long cultivated the Nolde myth. As recently as 2003, an enquiry from Aya Soika about the artist’s anti-Semitism went un-answered. Ten years later, after she had been granted access to the archives, she found a printout of her email in one of the relevant files. It would have been good to know a little more about the stages by which the foundation saw the light. The result, in any case, has been an exemplary lesson of how the Germany of today can, and generally is trying to, engage with a past that keeps on returning, stirring up mud even in what had previously seemed tranquil waters.

Nolde’s relationship with National Socialism has often been said to be “ambivalent”, and this is true, but only in so far as the Nazis were ambivalent about him. He himself was not in any meaningful sense politically ambivalent about Nazism; as this exhibition shows, he was a convinced Nazi.

Brendan Simms is the director of the Forum on Geopolitics, University of Cambridge. Constance Simms has just returned from Berlin, where she worked for NTV