The climactic set piece at the end of Fleabag’s first series is a so-called “sexhibition”. Fleabag’s stepmother (Olivia Colman) is an artist with a particular interest in sex, nudity and bodies. In a clinically beautiful exhibition space overlooking the Thames and St Paul’s beyond it, she displays a collection of odd, sexual objects, including the bidet that caused her first orgasm, a series of photographs of her naked body, and a wall of 17 different plaster cast penises, in varying states of erection. But Colman’s character insists that, despite appearances, this is not a show about sex. It’s about how sex is just a tool – to bring life, to connect people, to dominate, to control. “That’s what this show is really about. It’s about power.”

Watching that scene, I realised Fleabag was a show that seemed to be about sex but was really about power. “I wrote that scene right at the end,” creator Phoebe Waller-Bridge told me back in 2016, “and it did actually clarify a lot of the show for me. I had the same kind of revelation.” Across the six episodes, her characters are engaging in a constant power struggle with each other and with themselves. It is a programme about “power, control, people trying to hold everything together”, Waller-Bridge said, as “everyone’s trying to control their image, and their relationships, and their status in their relationships all the time”. Fleabag is an expert at controlling her image, but also has a gift for chipping away at the carefully constructed personas of others. “I think what makes the other characters nervous about Fleabag,” Waller-Bridge told me, “is that she is constantly trying to puncture that.”

The first series opened with a long, performative anecdote about a night of casual sex, that was simultaneously funny and seemed to be almost approaching something philosophical and moving, before abruptly ending with a punchline that was impossibly sublime: “Do I have a massive arsehole?” Fleabag used sex, sexual bravado, and even overt sexual anxiety as, in Waller-Bridge’s words, “an act of control and power”, both in her romantic relationships, with her family, and with us, the audience, directing her most outrageous jokes to camera. It was a way of deflecting attention away from the sadness, insecurity and shame that was consuming so much of her life – the grief and the guilt she feels after the deaths of her mother and her best friend. You get the sense that Fleabag is aware of this, deep down, but she never admits it. Instead she tells us, “I’m not obsessed with sex. I just can’t stop thinking about it. The performance of it. The awkwardness of it. The drama of it. The moment you realise someone wants your body. Not so much the feeling of it.” When we finally see her confront the misery her relationship with sex has brought into her life, it’s during a full breakdown. 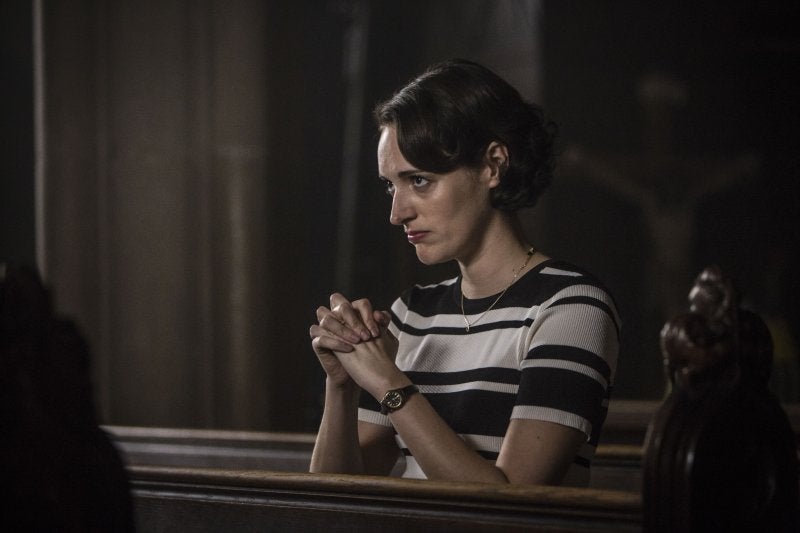 When season two begins 317 days, 19 hours and 26 minutes later, something about Fleabag seems a little different. She’s still making jokes to camera, still smiles in triumph when a particularly deft one lands. But there’s a steadiness to her gaze, a suggestion of ease in her posture. She’s saying less. (“You’re being so quiet!” her sister exclaims in frustration.) She’s tried playing tennis, doing squats in the park and eating healthily. She’s stopped having sex. She goes to a counselling session when her dad buys her a voucher. “I spent most of my adult life using sex to deflect from the screaming void inside my empty heart,” she says to her therapist, finally summing up the central struggle of the first season, before flicking her gaze to us in pride. “I’m good at this.”

She even meets someone she likes, and tries to get to know them as a person – Andrew Scott’s drinking, swearing, puppy dog-eyed priest. They have undeniable chemistry. She charms him and makes him laugh, but he has a keen eye for her games. He nudges her, until she gives in and talks to him about her feelings. At some point, she decides to be vulnerable. Or she almost does. Because falling in love with a priest – a man who literally wears his unavailability around his neck – feels like a deliberately impossible endeavour from the start. If sex is really about power, what does it say when two celibate people willingly enter into a long and torturous game of romantic edging?

“Kneel,” comes the reply. She kneels. He whips the curtain aside, kneels before her, takes her face in his hands, and kisses her. The power dynamic here is ambiguous to say the least – prompting a series of anguished opinion pieces. Is he abusing his position of power? Were his insistent reassurances of his celibacy (“We’re not going to have sex. I know that’s what you think you want from me, but it’s not. It won’t bring any good”) a manipulative tactic? Or just a wall of self-denial – one that crumbled under the pressure of lust, intimacy and one too many cans of pre-mixed gin and tonic? Or is it all just incredibly hot? Did she try to stop it? (“You make me tell you all my secrets so you can ultimately trap and control me?” she says before entering the confessional. “Sounds dodgy!”) Or does she want it? Does it make it any better if she did? Did I mention that it’s really, really hot?

Putting aside the thorny question of “abuse”, there’s a pendulum dynamic at play here. As a priest, consoling a crying parishioner, he may be in a position of power over her. But there are many preceding scenes where she seems to have the upper hand in their relationship – demonstrating her tried and tested skill for breaking the smooth veneer of composure others tirelessly work to present. There are many fizzing, delightful moments of sheer connection, two equal partners standing eye to eye, a mischievous glint in each. And there are also moments when she squirms under his penetrating gaze. Who is in control? Either way, their relationship feels both dizzyingly inevitable and full of hopeless longing. And love, as Scott’s priest himself points out, should feel like hope.

All human relationships are shaped by the overarching power structures they exist within. A bewildering network of intersecting privileges and disadvantages colour the way we interact – race, gender, age, class, the powers bestowed upon us by our jobs or our familial relationship or our abilities. But no human relationship can be fully described in these terms. It’s not all they are. It can’t be. There has to be something more.

If the first series told us sex was about power, the second says: Yes, and? Then what? After the endless back and forth over who has the upper hand, the tiring negations of structural and interpersonal power, what happens then? Could there be something more? Something joyful? Something safe? Something that feels like hope? 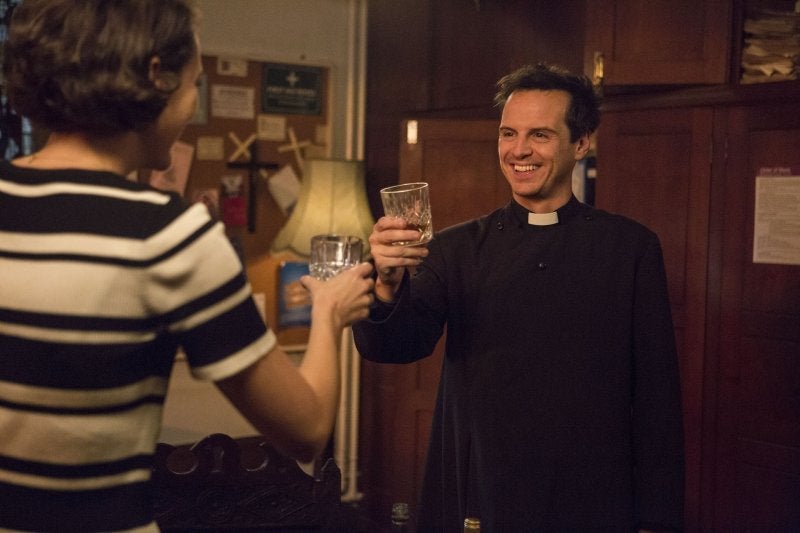 After a devastating monologue full of tears and swearing and despair, season one ended with Fleabag sat across from a man she’d formed a very unlikely bond with, despite all of the above. Taking in a deep breath, sitting up straight, she began to fill out a form for a loan. Perhaps it’s an unglamorous end to a show about stealing expensive pieces of art and getting fucked up the arse by horribly attractive men on motorbikes, but it also suggested that Fleabag was willing to do some boring work to make her life better.

Sometimes it’s easier to make performance art out of a life in tatters, to be self-consciously, gloriously, hilariously messed up, than it is to relinquish control and begin the embarrassing, scary task of being vulnerable enough to try and get better. For most of season one, Fleabag is not a woman who really wants to improve her life. At a mindfulness retreat with her sister, she is told, “Let go of your past.” She looks to camera. “Bit on the nose.” Her only contribution is sarcastic, as she over-earnestly tells the instructor, “I want to shut the noise out and reconnect to my inner thoughts on the road to feeling more at one with myself,” as a way of pointing out what complete and utter bollocks the whole exercise of getting to know yourself is.

But in season two, even as she does things that seem messy or self-destructive or out of control – shagging a priest, lying about a miscarriage, punching her brother-in-law – she forgives herself for them, and is honest with herself along the way. At the show’s close, she is both crying and smiling. She says goodbye to us in the midst of brutal heartbreak. But these six episodes have shown us a Fleabag who, in small but crucial ways, is different to the one we knew before. And as she walks away, we know she’ll be fine.