The things Toby Jones does for pleasure might seem to others like a perverse punishment. In 2000, Jones began habitually cramming himself into a small room in the Royal Free Hospital in Hampstead with a costume designer, 15 strangers and two fan heaters to practice hot yoga, or, in his own words, to “sweat his guts out”. He laughs at the memory today, remembering that, in the years when most people in London still hadn’t heard the word Bikram, “everyone thought I was mad”. But there’s a method in it. “It switches my brain off,” he says. “I’m kind of addicted to it.”

It’s more than just pleasure: it’s a professional duty to keep moving. As an actor with a background in physical theatre, he hopes “my knees aren’t so knackered that I’m still ready to forward roll my way through a production should the call come”. And when you’re acting all day, “your head and body become split in a way you can’t quite work out”. Yoga helps him bring them back together. “Oh my God,” he groans. “It will look dreadful, me talking about yoga.”

Jones has a rueful sense of humour. His eyebrows slope upwards at the centre as he smiles, lending him a sympathetic warmth. His distinctive face is at least 42 per cent brow: while foreheads aren’t necessarily known for their expressive range, his is perhaps the most communicative on screen, furling and unfurling like an accordion.

He’s made a career in physically expressive performances, often saying more about his characters outside of his scripted lines. His first on-screen appearance came with a tiny role in 1993’s Orlando: film critic Mark Kermode noted that Jones had “stolen” his brief scene “without saying anything”, joking that there were “four people reacting – three of which were on planet Earth”.

He twisted himself into the form of Truman Capote for his breakout role in Infamous (2006): sitting on a couch with his legs tangled together, hips turned one way and head the other, a palm pressed magnanimously to his chest. In Berberian Sound Studio (2012) he communicated a sound engineer’s terrifying descent into madness by stabbing vegetables with gradually increasing commitment. He was softly leering as Alfred Hitchcock in the BBC film The Girl (2012). As Neil Baldwin in Marvellous (2014), he brought pathos to a character wearing a full face of clown make-up, nodding with dawning comprehension as he is informed his elderly mother has died. He had menacing giddiness as a coiffed TV presenter in The Hunger Games (2012-2015), and brought high-pitched giggles and sobs to the voice of Dobby in Harry Potter (2001-2011).

In his new show, Don’t Forget The Driver, he plays an anxious, self-flagellating coach driver – in one scene he removes a hard-boiled egg from a paper bag and cracks the shell by tapping it against his own bald pate. “There’s a rightness to a gesture,” he tells me in the unglamorous Clapham cafe where we meet (his suggestion). “He’s not just chucking the shell away. That’s what you’re trying to find: what would this character do with an egg?”

“One of the great things about working with a camera is you can work with the small,” he explains. “Trying to convey maximum with minimum: that’s the basic thing that I’m interested in doing.”

He says he is “very influenced” by his training at L’École Internationale de Théâtre Jacques Lecoq in Paris, a clown school where physicality and movement are everything. “You were trained to understand how things move. Everything in the world moves on some sub-particle level. Everything is moving all the time, you’re breathing all the time – or you’re not breathing all the time. So, it’s all about trying to find the movement, and what story that’s telling.”

Jones looks as though he might be about to move on when I sit down to talk to him. His coat and large cycling bag are piled on the chair next to him, he has a thick, dark jacket on and is sipping from a takeaway cup. The cup, the result of a miscommunication with the barista, is causing him not insignificant moral anxiety. “It seems such a simple mistake, pouring it in the wrong cup. But I think, when I leave, what happens to that cup? I’m very aware of micro-decisions,” he says. “I deal in details.” 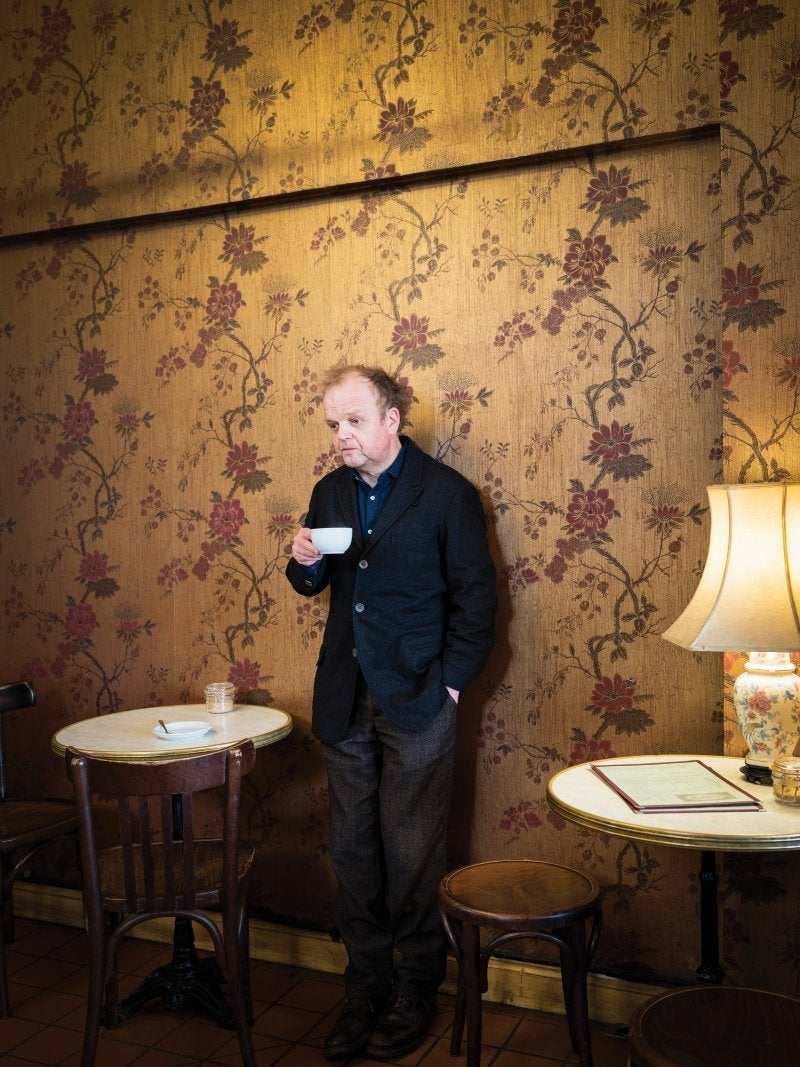 Jones was born in Hammersmith in London in 1966, but spent the first decade of his life in Reigate, Surrey, before his family moved to Oxfordshire. Before he started at Abingdon School, for a short time he attended Christ Church Cathedral School: he was a chorister, pottering around in a pink cassock and singing Zadok the Priest. “When you’ve never heard that before, and you’re singing it, with all the voices gathering… you don’t get a feeling like that until house music kicks in in the late Nineties!”

He wasn’t a religious child, but he does remember the pressure of internal quandaries, even then. “You’ve got to do something with the voice in your head. Everyone spends their lives negotiating this voice, this voice that’s corrective, censoring you, baiting you, laughing at you, telling you to pipe down, telling you to speak up, whatever it is: we all have that voice. And sometimes when I was a kid I thought that might be God speaking to me. In a very banal, everyday, non-epiphanic way. I always sort of thought that would need addressing at some point!” He laughs. “And I still feel the same way. What is that voice?”

Jones is aware he had a more privileged route into acting than many, including his father, Freddie Jones, who entered the profession from a working-class background later in life. “My experience was very, very different. Obviously I was brought up around actors.” Jones is pleased to see more thought going into which actors have the right experience for which parts, and that more nuanced roles are being written for actors of all classes, genders and races.

“There’s a huge correction going on,” he says. “That’s also making for much better stories as a result, because there have been whole ranges of experience that have sort of been edited out of drama.” He mentions Kieran in Don’t Forget The Driver, a young man with cerebral palsy played by new actor Wills Whittington. “He’s fantastic in this. And obviously it would have been entirely inappropriate to cast an actor who didn’t have cerebral palsy in that role.”

Despite his own comfortable upbringing, he insists he doesn’t think about class when choosing roles. “Class would lead me into a very generalised area. Instead you think: what drink could he afford? Is he used to having his elbows on the table? Has he been told at some point he shouldn’t? Does the food come to his mouth?” He leans over the table, to an imaginary plate. “Or does he go to the food?”

Jones is charming and funny during our conversation, yet I get the sense that he finds interviews slightly tortuous. As well as yoga, he is conflicted when I ask about religion and politics and how he’d sum up his acting style. “Things are said about me all the time that I’m surprised about, appalled about, shocked about, because they weren’t what I intended.” The point of it all seems to elude him. “What else can an actor possibly say that hasn’t been said a million times before? And when you see people describing acting in print it’s so ghastly.”

But Jones is no longer just an actor. He has co-written Don’t Forget The Driver alongside the acclaimed playwright Tim Crouch, who wanted to write a comedy set in his hometown of Bognor Regis. The two have been friends for 20 years. “I scraped the barrel, and there was Toby Jones,” Crouch jokes to me over the phone when I ask what drew him to Jones for the project. “He has the qualities that I see this series as exploring. There’s something particularly English and heartbreakingly comic about it. And it was an excuse to spend time together, eating sushi and swanning around Clerkenwell.” Jones was less relaxed about his first foray into writing for television. “My fingers freeze as I try to write the first draft of dialogue. I literally write a word, and go: ‘Nnnnaaaaagh! No one would say that!’” 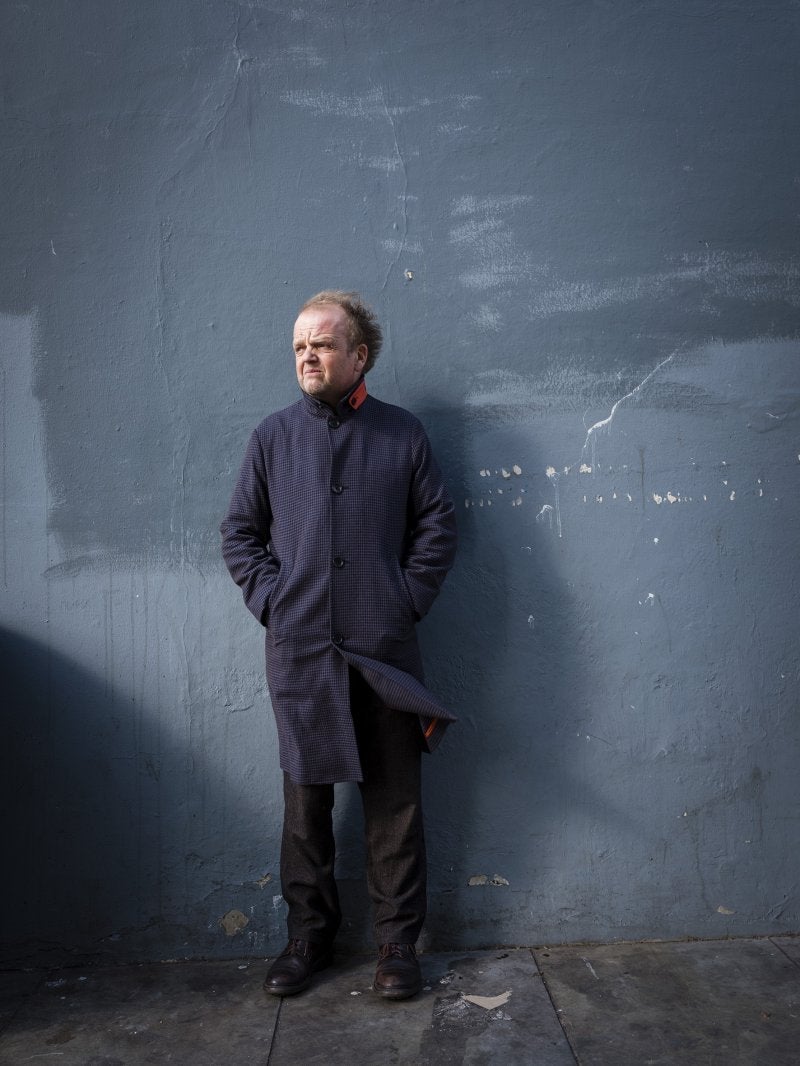 Together, Jones and Crouch made a coach trip to Adinkerke in Belgium, followed by a series of stays at Crouch’s dad’s house in Bognor. Crouch speaks fondly of an evening of filming on Bognor Pier at sunset, followed by a meal at a “weird” restaurant and dancing at Sheiks, a faded nightclub nestled in the pier itself. He laughs as he recalls Jones and some “of the more powerful people in British television, at 1 o’clock in the morning… getting down!” “I began to really get into his nostalgia for this place,” Jones says with a smile.

The show follows Jones as coach driver Peter Green, who suddenly finds himself out of his depth when he accidentally smuggles a refugee back to England after a day trip to France. It’s a comedy with a surprisingly bleak opening: Peter discovers a body on Bognor beach. Overcome with horror, instead of alerting the authorities, he runs away from the scene. Peter is ashamed of his reaction, and when the refugee Rita appears in his life, he believes he has a moral responsibility to help her.

The opening is a risk. “When we occasionally asked ourselves, ‘Is this funny?’” Jones says, “We’d always try and find the contradictions we all face on a day-to-day basis. I’m going to give some money to this homeless person, but not the next one because I’ve already done that. But I will make eye contact with them, and say: ‘I haven’t got any change, mate.’ These moral trade-ups you make every day. In day-to-day transactions one is thinking about [morality] all the time.” Even transactions as seemingly trivial as being given a takeaway coffee cup.

Set in a town where an estimated 65 per cent of people voted Leave, touching on themes of immigration and British cultural nostalgia, Don’t Forget The Driver has already been called “Brexit TV”. “We were writing it way before Brexit,” Jones says. “I’m sure people will say it’s about Brexit, but everything’s about Brexit. And no one knows what Brexit means! We never use words like ‘Brexit’, ‘migrants’, ‘refugees’, because those words are empty, or they’re already too freighted. We’re making no bigger political point than if we didn’t make a show about migrants.”

Jones was excited to work on another regional BBC project after “some very happy experiences” on two much-beloved shows: Detectorists, a cult comedy following two middle-aged metal detectorists in rural Essex, and the acclaimed Marvellous, set in Stoke-on-Trent, both “decentralised” projects with specific settings that helped inform character and tone. “Nowhere’s ordinary,” he says. “The more you look at a place, the more specific and particular it gets. I don’t know any other way to work than being really, really particular.”

Jones is keen to take his hyper-specificity to further writing projects, but there’s no one form or genre that he plans to work in next. “The best thing about my job is shifting genres, shifting worlds. Getting to work with different people, getting to revisit literature and places you love. It’s an amazing job, you know. If you can keep moving.”

“Don’t Forget the Driver” is coming soon to BBC Two