In 1830, an English geologist named Henry Thomas De la Beche painted a watercolour of Dorset. The scene it portrayed was not a conventional one. Cows and green fields were notable by their absence. Instead, palm trees sprouted from otherwise bare lumps of rock. Shark-like reptiles with bristling teeth and giant eyes swam in a sinister, monster-filled sea. Overhead there soared strange creatures, half-dragon, half-bat. Bucolic it was not.

De la Beche’s theme was Duria Antiquior: a more ancient Dorset. As a young man, he had become an associate and admirer of Mary Anning, the daughter of a cabinet-maker from Lyme Regis whose unrivalled eye for fossils had brought to light a whole host of astonishing discoveries. The seas and skies of Dorset, it appeared, had once teemed with remarkable creatures. Geologists made their names presenting Anning’s finds to learned societies in London. Anning herself, meanwhile, as someone who stood outside the scientific establishment, was denied both the credit and the financial rewards that were properly her due. De la Beche, outraged on her behalf, painted Duria Antiquior to make amends. Reproduced as a lithograph, it proved wildly popular. Anning’s discoveries were introduced to a fascinated public, and her celebrity assured. De la Beche, meanwhile, had initiated an entire new genre: what Zoë Lescaze, in her hulking great sauropod of a new book, terms “paleoart”. 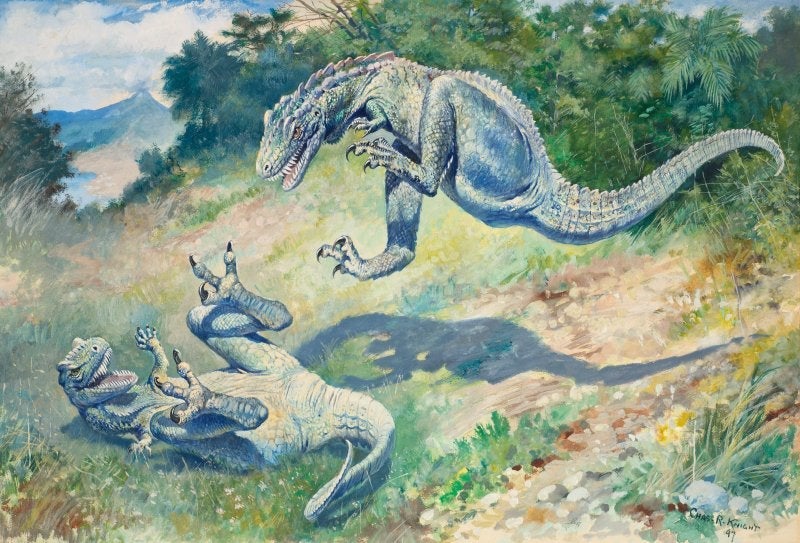 The ambition to put flesh on prehistoric bones did not originate in 19th-century Britain. The Roman emperor Tiberius, presented with a fossilised tooth over a foot long, is said to have commissioned the model of a human head proportionate to the scale of the artefact. At Klagenfurt in Austria, the statue of a dragon sculpted in 1590 was given a head modelled on the skull of a woolly rhinoceros. Only with the emergence of palaeontology as a science, though, were artists at last able to portray what long-extinct creatures might have looked like with a reasonable degree of accuracy – and, what was more, to situate them within landscapes thrillingly different to those of the present day. This is why De la Beche ranks as such an innovator.

Few genres of art were more authentically representative of the industrial age than portrayals of the prehistoric past. As the artist Walton Ford puts it in his preface: “This is a book brimming with images born in the heat of startling discovery, urgent works of first contact and of handcrafted time travel.”

As such, they are images not just of prehistoric life, but of how different people at different times have imagined prehistoric life. Hence, perhaps, why the earliest illustrations compiled in the book tend to be the most agitated and unsettling of all. They are the expressions of an entire upheaval in sensibility, of the shock felt by complacent humanity at the discovery of just how immense were the cycles of geological time, and of how brutal had been the repeated cullings of creatures that were now only to be found entombed in rock.

“Prehistory,” as Lescaze puts it, “could not help but engender uncomfortable musings on a benevolent God’s capacity to annihilate entire species.” A shadow of the apocalyptic hung over the earliest works of paleoart. Volcanoes exploded, oceans seethed, beast preyed on beast. In Duria Antiqua, such was the terror of one plesiosaur that the wretched animal was shown voiding proto-coprolites on to the sea floor. 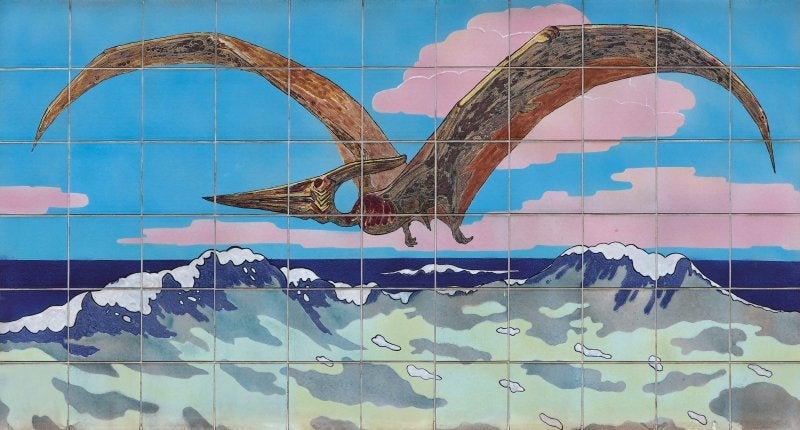 This conviction, that life in prehistory had been nothing but endless competition, achieved its most iconic expression in America – fittingly, in 1928, just a year before the Wall Street Crash. Charles Knight’s illustration of a Tyrannosaurus rex confronting a Triceratops established a template for dinosaur-on-dinosaur action that has never been superceded. It was an image bred of American mythology – and specifically of the mythology of the lands across which both species of dinosaur had once roamed. In Knight’s rendering, they advance through the haze, as Lescaze nicely puts it, “like gunslingers outside a saloon”.

Different cultures, though, could imagine the Mesozoic in different ways. In an early Second World War Soviet painting by Konstantin Konstantinovich Flyorov, the ceratopsians are altogether less individualistic. Banding together into a collective, three of them see off a tyrannosaur which, like the Nazis in Stalingrad, proves unable to breach a determined defence. Almost fauvist in its use of colour and abstraction, Flyorov’s paintings will prove revelatory to anyone brought up, as I was, on an exclusive diet of Western paleo-illustrations.

“The art form,” Lescaze argues, “reached its apogee under the Soviet regime, flourishing in a society that not only prized science, but craved glory and international prestige.” As she brilliantly demonstrates, prehistory provided artists under Stalin with a theme that could legitimately encompass ambivalence, mystery and doubt. “There is no single narrative, no blatant message impressed upon the viewer.” The startling images that Lescazes has assembled from the former Soviet Union, justify the price of this sumptuous, beautiful book alone.

So too, though, do the studies of better-known paleo-artists, whose work will be instantly familiar to anyone who enjoyed a dinosaur-obsessed childhood in the 1970s or 1980s: Rudolph Zallinger, who toiled in Yale’s Peabody Museum throughout the Second World War over a colossal fresco of Mesozoic megafauna; the troubled, ghoulish Czech, Zdenek Burian, whose mammoths, brachiosaurs and Neanderthals “burn with the artist’s obvious fascination with fur, flesh, scales, and skin”; Neave Parker, a beer-drinking, self-proclaimed clairvoyant who worked at the Natural History Museum, and had a taste, when drawing dinosaurs, for “hyperarticulated muscle”. 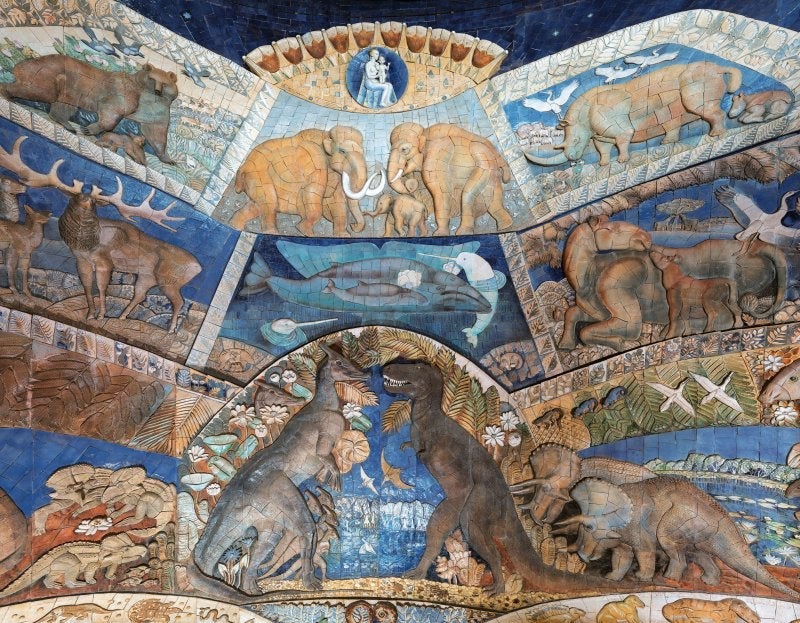 The only real disappointment of the book is that it stops when it does: for there is no room, in Lescaze’s otherwise panoramic study of paleoart, for more recent developments in the genre. The work of contemporary paleo-artists such as Julius Csotonyi or Mark Witton bear comparison with anything in the field that has gone before: true to palaeontology, but true as well to the traditions of eeriness and inventiveness that have been constants in paleoart since De la Beche settled down to paint Jurassic Dorset.

Tom Holland’s most recent book is “Dynasty: the Rise and fall of the House of Caesar” (Little, Brown)