The digital world is a world of symbols, and many of these reassure us in one way or another that something we may not be able to see happening is, in fact, happening. From spinning disks to turning sand-timers, the language of loading is one of movement and materiality. Clipboards, scissors, compasses, magnifying glasses, paint brushes, binoculars, envelops, microphones, gears, cogs, buttons, levers. Our interfaces are full of objects that have been severed from their origins, gouged from an analogue past and appropriated for the digital present. These are icons that make complex computational processes seem solid, industrial, relatable.

One icon we see on a daily basis is the buffer symbol; that swirling, ubiquitous circle we encounter as we wait for data to move, videos to load, action to happen. The spokes of the wheel brighten and fade as we wait with folded arms in the knowledge that transmission is occurring behind our screens. The symbol looms large in the English novelist Tom McCarthy’s new book, Satin Island. McCarthy, whose last novel C was shortlisted for the Booker Prize, has a longstanding interest in transmission, whether it’s in his novels, his work with the International Necronautical Society or in critical writing like his 2012 essay “Transmission and the Individual Remix”. In his new novel it is the buffer symbol that sits on the front cover, enlarged and draped in oil, both familiar and alien.

U, the protagonist in Satin Island, is tasked with writing The Great Report, “the first and last word on our age,” as the company chief who employs him describes it. In one of the novel’s most memorable sections, U focuses his attention on the buffer symbol and what goes on behind it. He pictures “hordes of bits and bytes and megabytes, all beavering away to get the requisite data”. Beyond that he pictures servers in Finland, Nevada or Uzbekistan with “stacks of memory banks, satellite dishes sprouting all around them, pumping out information non-stop”. For U, the churning movement of the buffer symbol represents the Internet-machine in action and the thought of this is “sublimely reassuring”.

“The closest thing to compare it to maybe Egyptian hieroglyphics,” says Tom McCarthy when I talk to him over the phone. “In the way those symbols are created and then take on a life of their own. Especially when, millennia later, you enter the tomb and you’re surrounded by these symbols and you try to piece together what they mean, their syntax and grammar. My hero is an Egyptologist in a contemporary sense, entering this labyrinth of symbols and trying to work out the family network of those symbols.” 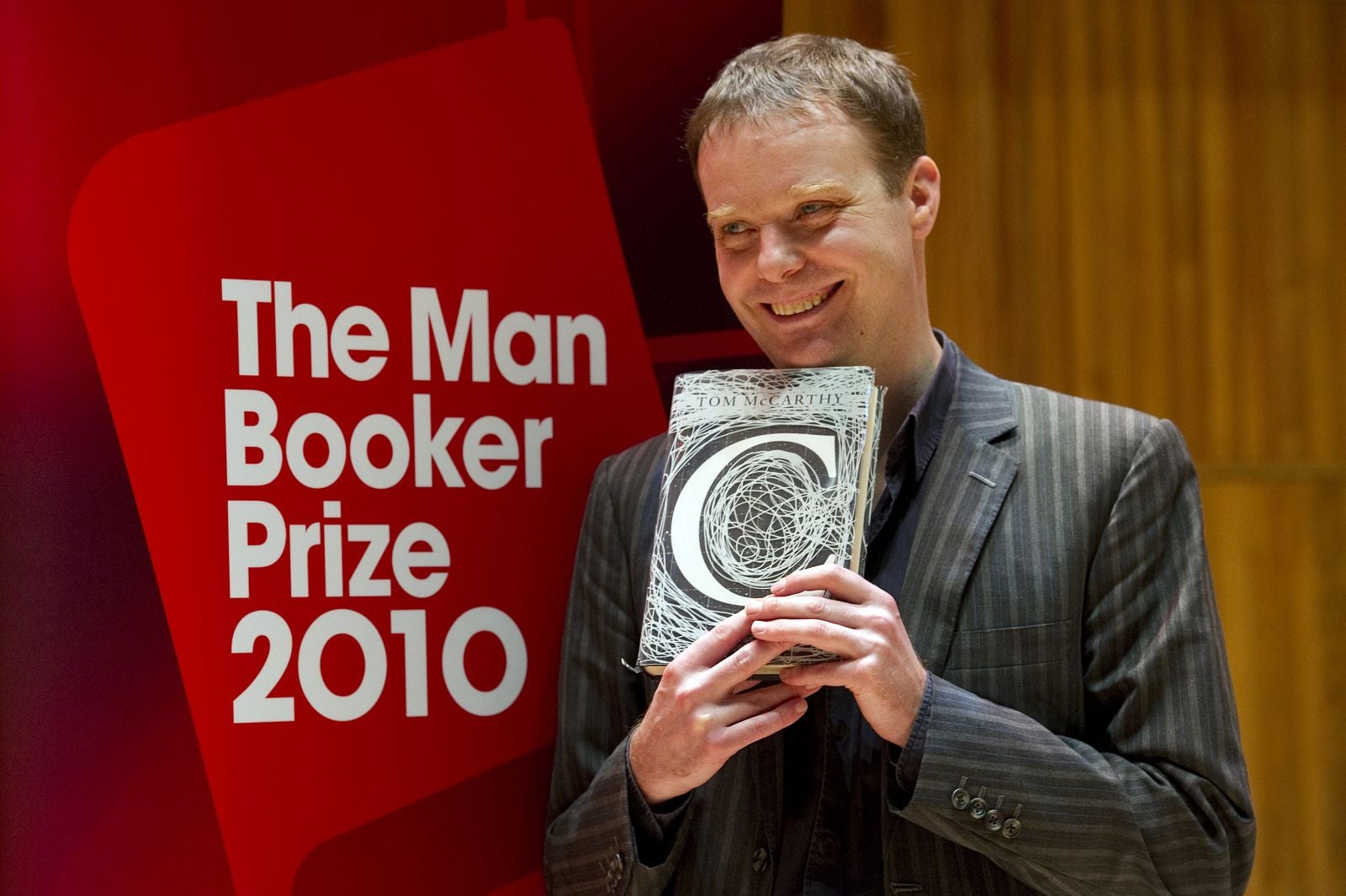 You can imagine an archaeologist in the distant future entering the tomb of a 21st-century computer and tracing the meaning of symbols to their long-forgotten origins – for example, the toothed and twirling circles of loading, referencing the gears of a mechanical clock. Or the serrated squares and triangles-in-rectangles of email, referencing the ancient technology of stamps and envelopes. Symbols for transmission often make invisible actions seem material, but for McCarthy creating an opposition between a material past and an immaterial present is misleading.

“I don’t think there’s anything immaterial about digital culture,” he tells me. “There are black boxes, there are giant servers in Uzbekistan and Finland. I’m a total materialist. I think everything is material. In C or in this book there is always the black box at the heart of it all. The crypt with a body in it. A space in which encryption happens. There’s always a body at the centre.”

We stroke the screen of our phone and somewhere in the middle of the desert Google’s sprawling data centres deliver the information we need. But in Satin Island, U begins to worry: “What if it were just a circle, spinning on my screen, and nothing else? What if the supply-chain, its great bounty, had dried up, or been cut off, or never been connected in the first place?” Digital technology may still be material but does the separation of interface and hardware mean there’s disconnection between one end of the process and the other, between the individual and the network?

“There’s the utopian narrative that network culture offers us,” McCarthy says. “That Google and Apple sell us. ‘Don’t worry,’ they tell us. ‘You are connected. There is an infrastructure around you. You are held in place.  While this circle spins we are beavering away to get this stuff for you. There are a million data angels dancing on the pinhead of your connection. You’ll get it in just a sec. Another twelve seconds.’ The other side of this is, what if U is just sitting in his chair looking at a circle? That’s material as well but it’s a vision of disconnection. For U that’s underpinned by his obsession with a parachutist and the word play between buffering and buffeting. The parachutist has the same anxiety: ‘Don’t worry. You’re falling but you’re held in place. These strands of your parachute converge on you.’ But what if that one little buckle that holds it in place is gone and you’re just falling through the sky?”

Staring at a buffer symbol is both reassuring and, as it continues, distressing. We wait with the belief that something is happening out of sight. But when we wait too long that belief shatters. In that way, they are comparable to religious symbols, which also serve as grounded icons for invisible processes. They are tangible shapes that can be held, kissed and worshiped in the belief that they represent structures we aren’t able to see or touch.  “It’s about whether we are saved by some kind of structure which is underpinned by an absolute guarantor,” he tells me. “Whether that is God or a black box in Nevada. Or, whether we’re just moving through this disconnected, map-less space that we can’t navigate or get traction on any more.”

“The future has always been the trump card in a certain neo-liberal narrative of progress,” McCarthy says. “I think the very concept of the future should be interrogated and attacked. It’s much more interesting to look at a buffering zone where futures and temporalities are discontinuous and jarring and smashing up against each other. This is what Modernism understood. Time in James Joyce or Samuel Beckett isn’t linear at all. It’s elliptical and circular. Joyce talks about the Here and Now through which all future plunges into the past. In Beckett’s Waiting for Godot and Happy Days you have this looping structure where characters re-enact themselves, and Beckett gets that from Joyce because that’s the model Joyce uses in Finnegans Wake, and Joyce gets it from Giambattista Vico, the 18th-century philosopher, who proposes this spring-like structure of time, rather than the linear one of the enlightenment.”

In a world where the entire archive of everything is only a click away, is it becoming harder to think of time as a continuous line of one thing after another? In Ali Smith’s How To Be Both a character is faced with a fresco that has been painted over and is asked what came first, the picture underneath or the picture on the surface. Browser windows overlap like frescos on our screens and, like the two sections of Ali Smith’s novel, they can be read in any order; they happen simultaneously. Digital hieroglyphics are in many ways what help us to navigate this space. They are the swirls, gears and objects that help us to turn time and process in the network into a narrative. In Satin Island, the buffer symbol is a place where comprehension breaks down. It’s a vision of “a kind of systematic delay and an out-of-jointness”. And it represents our state of digital disconnection, in which we are “simultaneously saturated with data and at the same time not able to render it”.