James Graham’s captivating drama about the coalition’s formation starts off as satire and ends as an opera. It is the young playwright’s eye for detail and evident reams of source material that allow for such an astute commentary, and human portrayal, of how the Tory/Lib Dem coalition was cobbled together in 2010.

Those now infamous “five days in May” when the hung parliament flung our political leaders into pressured negotiations are the perfect basis for a tragicomedy. Fatal flaws, sad endings, and tentative beginnings make for a gripping rendition of a drama that took place at the time firmly behind closed doors. 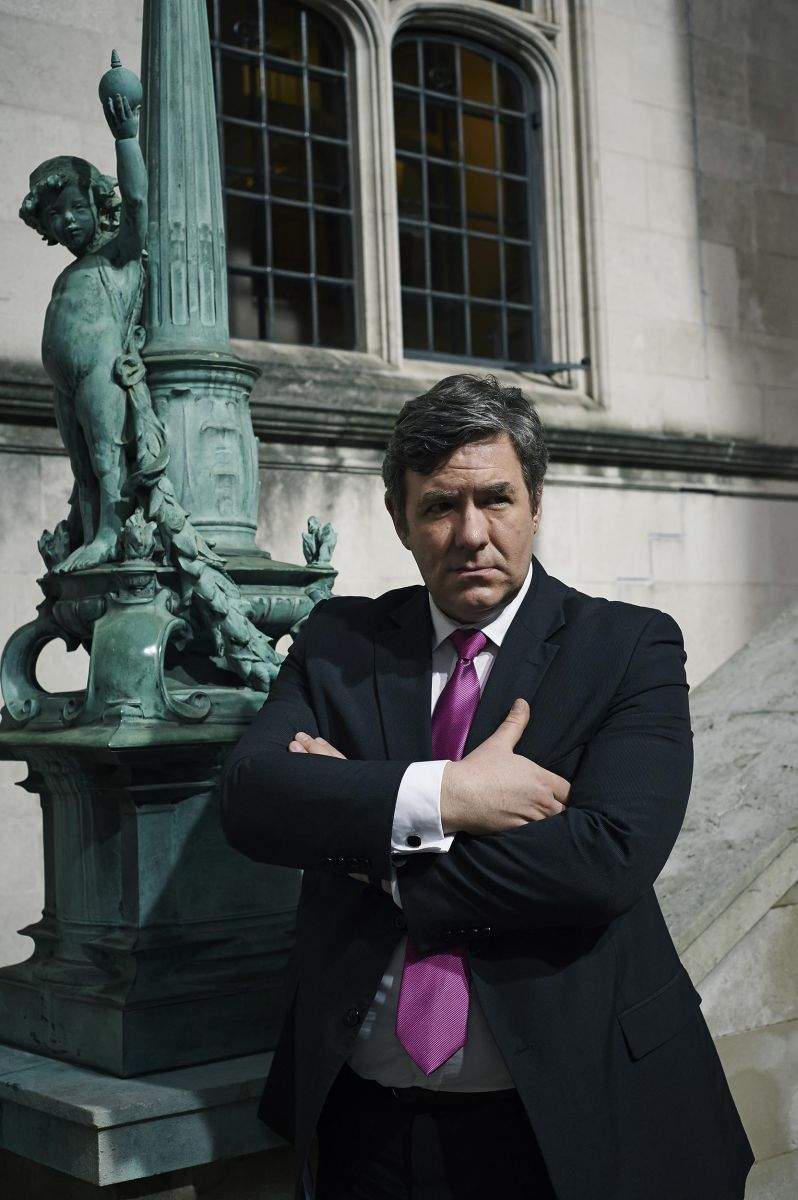 Graham, the playwright behind the National Theatre’s hit This House, which portrayed another precarious government – Jim Callaghan’s wobbly rule from 1976-79 – has written a balanced and exhaustively researched film about the dramatic 11th-hour coalition negotiations with both the Tories and Labour from Nick Clegg’s perspective.

“The personalities, clashes, the farcical nature of some of it, the loss of dignity – it was characterful and weird,” Graham tells me, when asked why he chose to dramatise this subject. “The lack of sleep, the pressure, and exhaustion make it exciting . . . It’s really important to me to try and humanise them.”

And he succeeds. Although Graham insists “it is not a priority to change people’s political opinions,” he does inspire “empathy towards politicians” with his characters’ portrayal of the main players in the negotiations. “There’s this presumption that they’re all corrupt and incompetent – but I’d love people to empathise with the incredible situation.”

Coalition is masterfully unbiased; the one clear lesson to the audience is that our politicians are humans. And this is conveyed with passion by the actors. Ian Grieve’s Gordon Brown is a boorish, ham-fisted mountain of dignity and wounded pride. Bertie Carvel’s Nick Clegg sets tentatively out on a journey from gauche newcomer, biting his lip at disappointed father figure Paddy Ashdown’s lamentations, to reluctantly ruthless pragmatist. Mark Dexter, whose uncannily Cameronesque features mean he’s also playing who he now calls “Dave” in The Audience stage play, portrays the Prime Minister’s superficial confidence and latent unease with eerie accuracy.

But the star turn is Mark Gatiss as a darkly frivolous Peter Mandelson. Gripping Brown’s knee in tender warning, when the then PM roars about “progressive alliance” in a blundering attempt to woo Clegg; casually texting the Lib Dems under the table in icy coalition negotiations; nodding menacingly that he had secretly scrambled trade union activists to protest against the Lib Dems working with Tories; suggesting lightly that the secret tunnel he and Brown wade through beneath Downing Street during the dying whisper of the Labour government is a “metaphor”: Gatiss has the macabre silliness spot on. 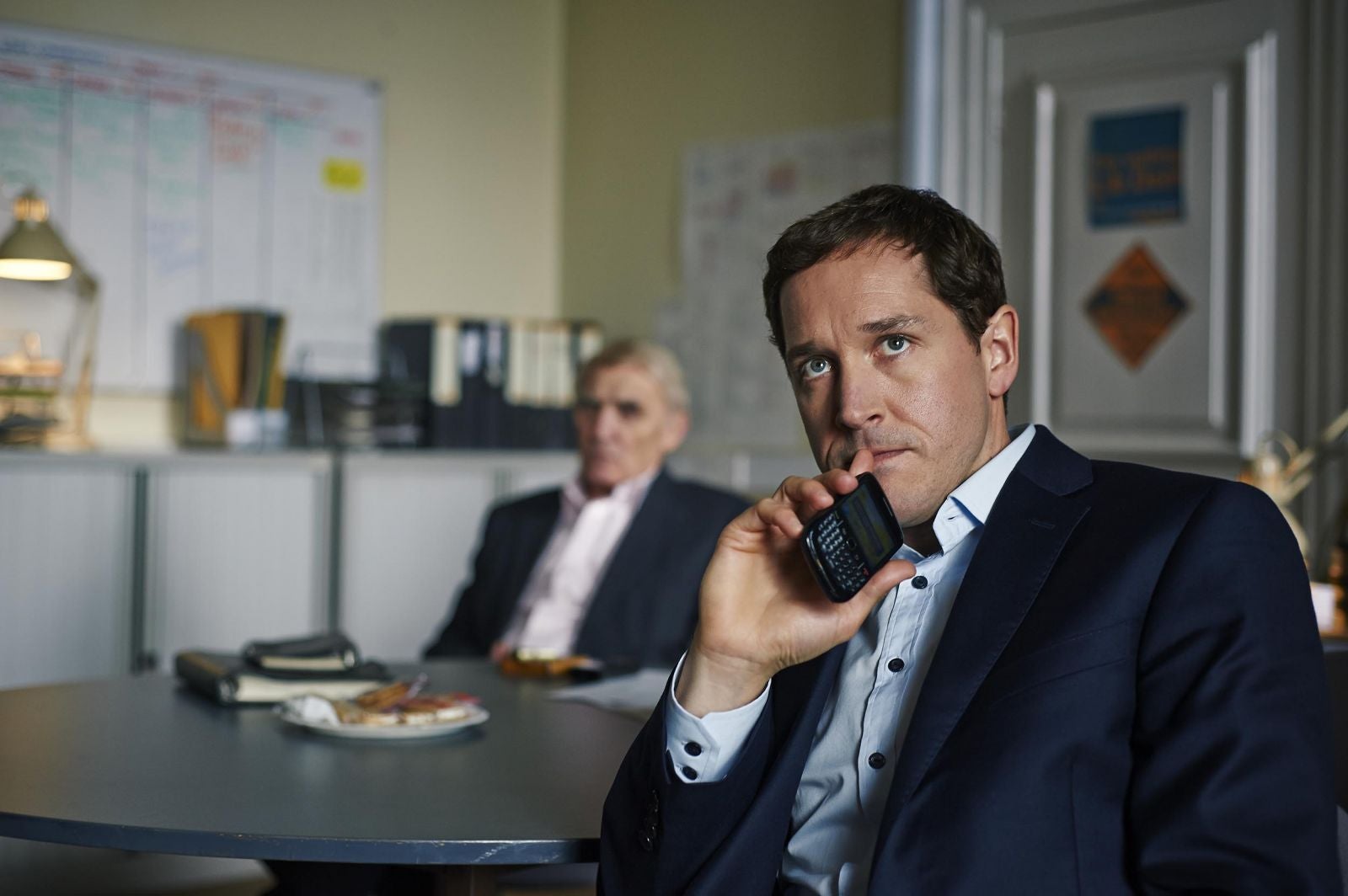 And all these beautiful inside details that will fascinate Westminster insiders and Saturday night audiences alike are the result of Graham’s extensive research. “I was just really cheeky and sent loads of emails,” he says.

“When I began researching this, I just began asking whether I could come and meet people. So we met a range of people across the political spectrum – Labour, Tory, Lib Dems, and also members of the civil service – and luckily, for whatever reason, I’m not sure why, they were all pretty keen to get their side of the story across,” he grins. “Obviously it’s a drama, so the conversations happening behind closed doors were imagined by me.”

He tells me he found Paddy Ashdown, the first person he met when preparing to write the piece, particularly useful. “He had that passion, that love of emotion – which drove me from that point on. That the situation was high stakes in a personal sense. He described to me the tears shed in that final meeting [of Clegg with the Lib Dem MPs ahead of entering government]. The human emotion.” 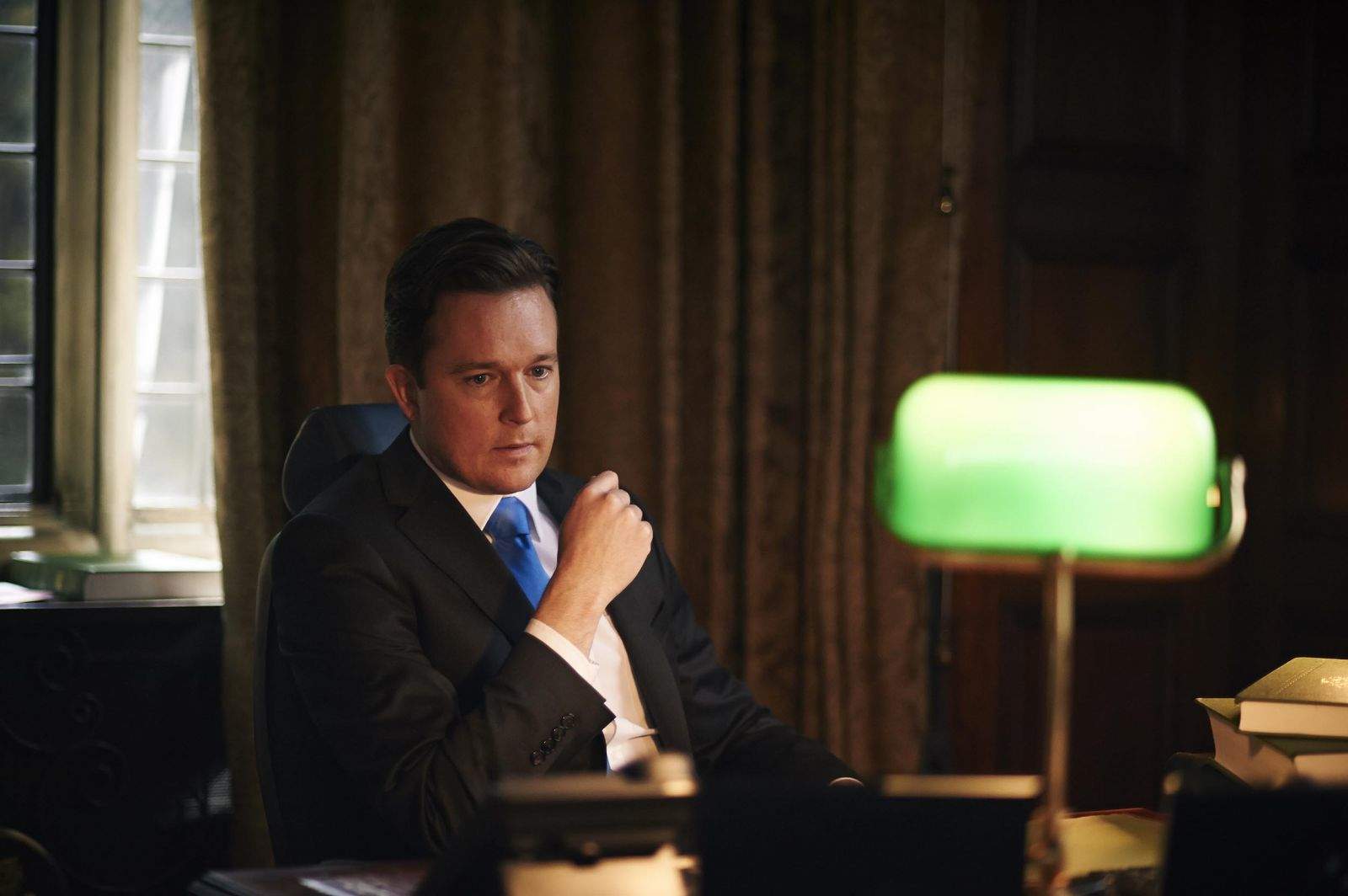 Graham also found George Osborne – who invited him to No 11 – a great help. And this might have informed the mischievous puppet master behind Cameron’s quavering leadership that is the soon-to-be-Chancellor in this production.

“I did sense from him [Osborne] an enjoyment about what went on in these few days,” says Graham. “I found him to have a twinkle in his eye when he told me some of these stories, and he, like a lot of people, saw it as a poker game, and I think he was very pleased with some of the moves they pulled in order to get into power.”

Gatiss too is clearly fascinated by the machinations behind the scenes. “An important thing for me was the realisation that as a punter you don’t know the half of it. We make so many assumptions about politicians from what we see.”

A self-confessed “politics junkie”, the Sherlock actor says, “I hate the idea that people tar politicians all with the same brush. They get no credit and all of the blame. Really they’re rounded human beings full of foibles, contradictions.”

He has long been fascinated by Mandelson, and yearned to play him. He views his much-loved part Mycroft, Sherlock’s brother, as a “Mandelsonian figure”. “I find figures like Mandelson really fascinating,” he tells me. “He’s funny, bright, flirtatious, silly really. He’s having a good time because he’s been called back to the fray.” 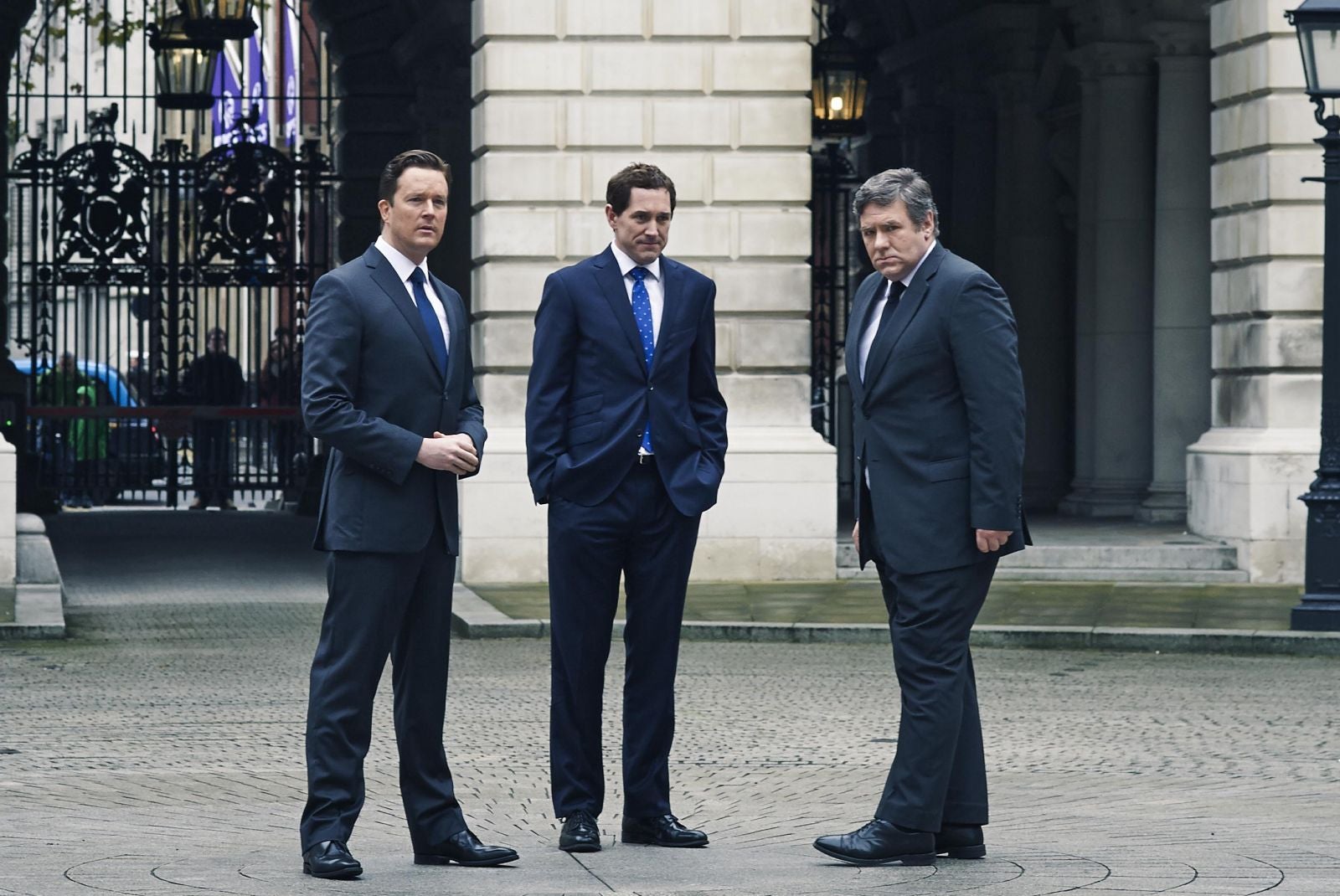 The three leaders stand awkwardly during VE Day after the election. Photo: Channel 4

Gatiss would love to “carry on forever” playing Mandelson, chuckling, “I think he’s always going to be with us.” He would also “certainly like to play more politicians; I’d love to do a film about Attlee; he’s an amazing man, probably the best prime minister we’ve ever had”.

Like Graham, he doesn’t want to change the politics of his audience, but would like to put our politicians in a new, more relatable, light: “You can be diametrically opposed to someone’s politics but you can still find something within the person that can appeal to you on some tragic level, a fatal flaw. It’s not too much to push these Shakespearean analogies because these are the big stories. 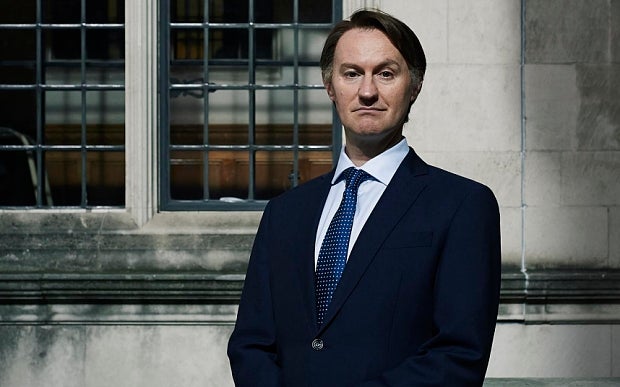 Graham speaks of the story as “Shakespearean”, as does Grieve, who describes playing Brown as a “mix of Macbeth with King Lear, and there’s elements of Henry V. You can apply any number of the history plays or the tragedies to any of these situations because they’re so well observed.”

Carvel was also attracted to the drama of the story. “I read the script voraciously and made a beeline for [playing] Clegg,” he tells me. “Because I think his story is so dramatic – he was at the crux of the drama. The fact he’s emerged as a traitor and pariah is really unfair . . . I will watch him next time round [this May] with empathy.”

Gatiss emphasises this theatrical dimension of the figures involved in coalition wrangling: “It’s the same story throughout history; it’s the struggle for the crown. That’s what gives it the classical dimension. You can change the clothes and everything, people don’t get killed as often, but actually it’s the same thing and that’s what gives it the heroic, melancholy dimension as well as all the cut and thrust of it.”

Coalition is on Channel 4 on Saturday at 9pm